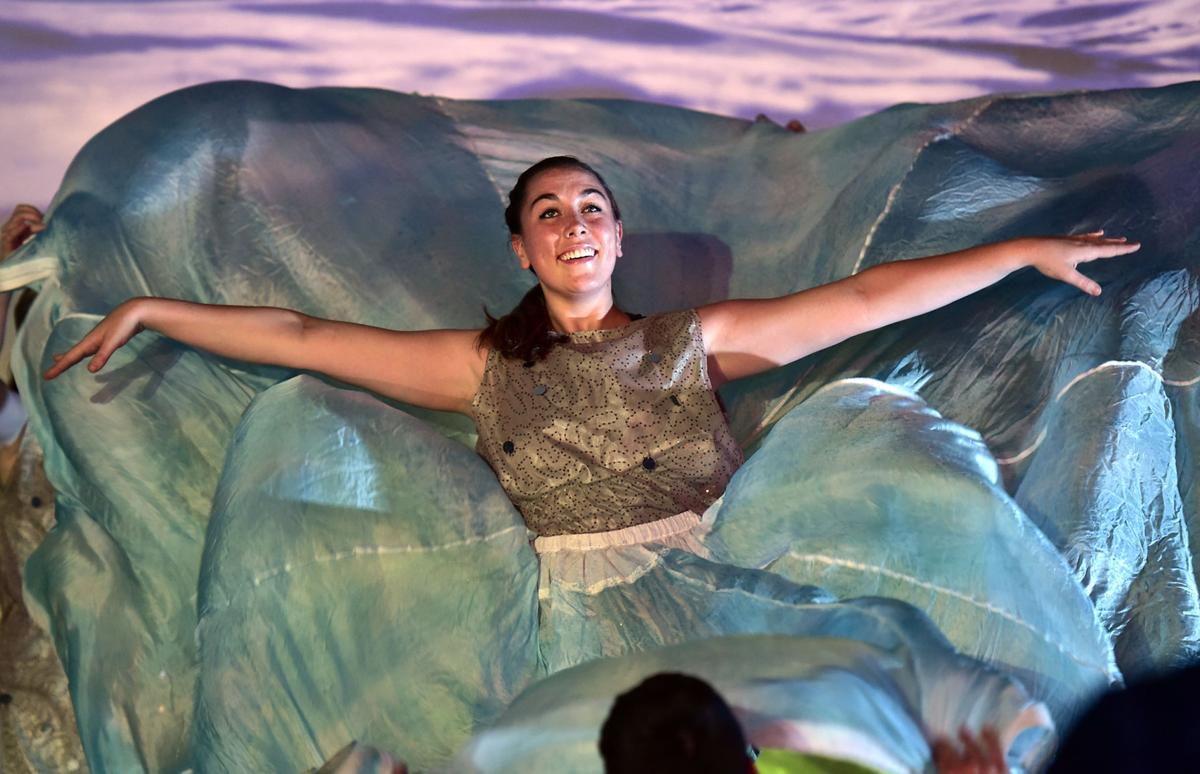 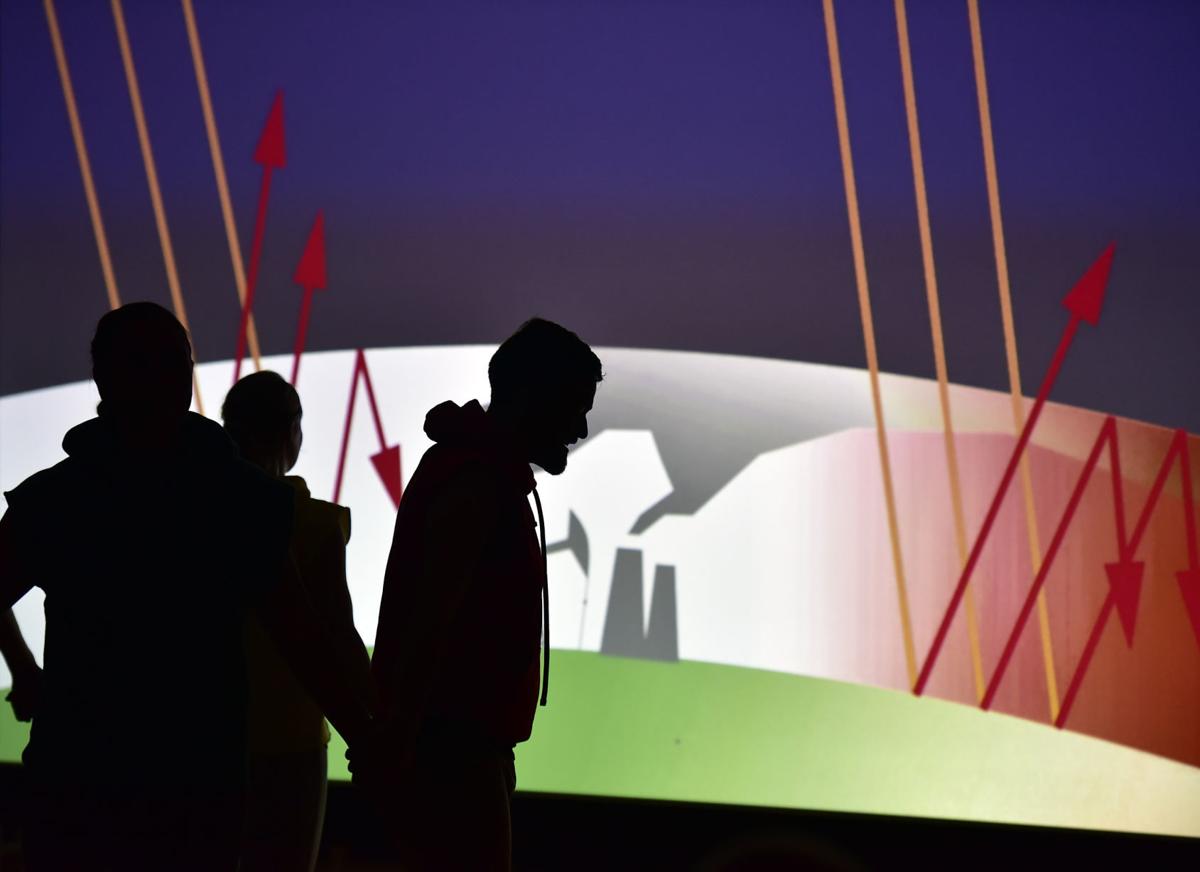 The production uses visual elements on a screen behind the dancers. 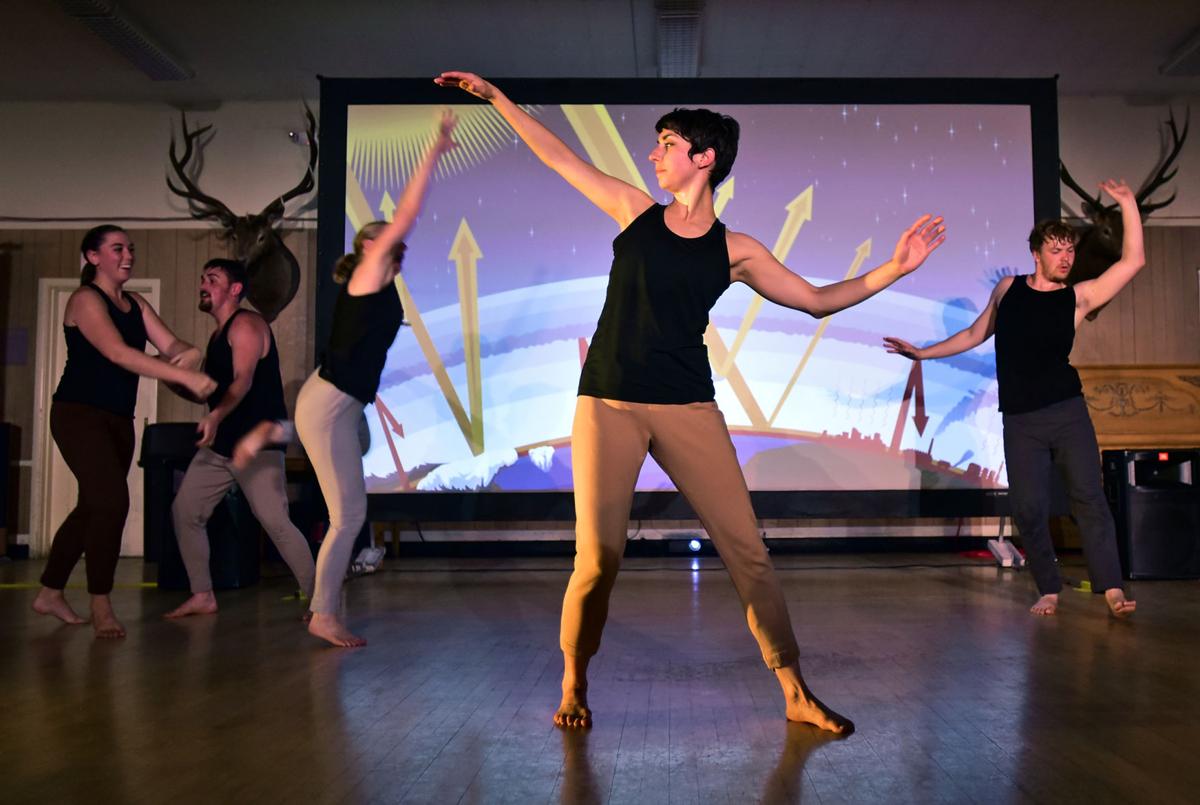 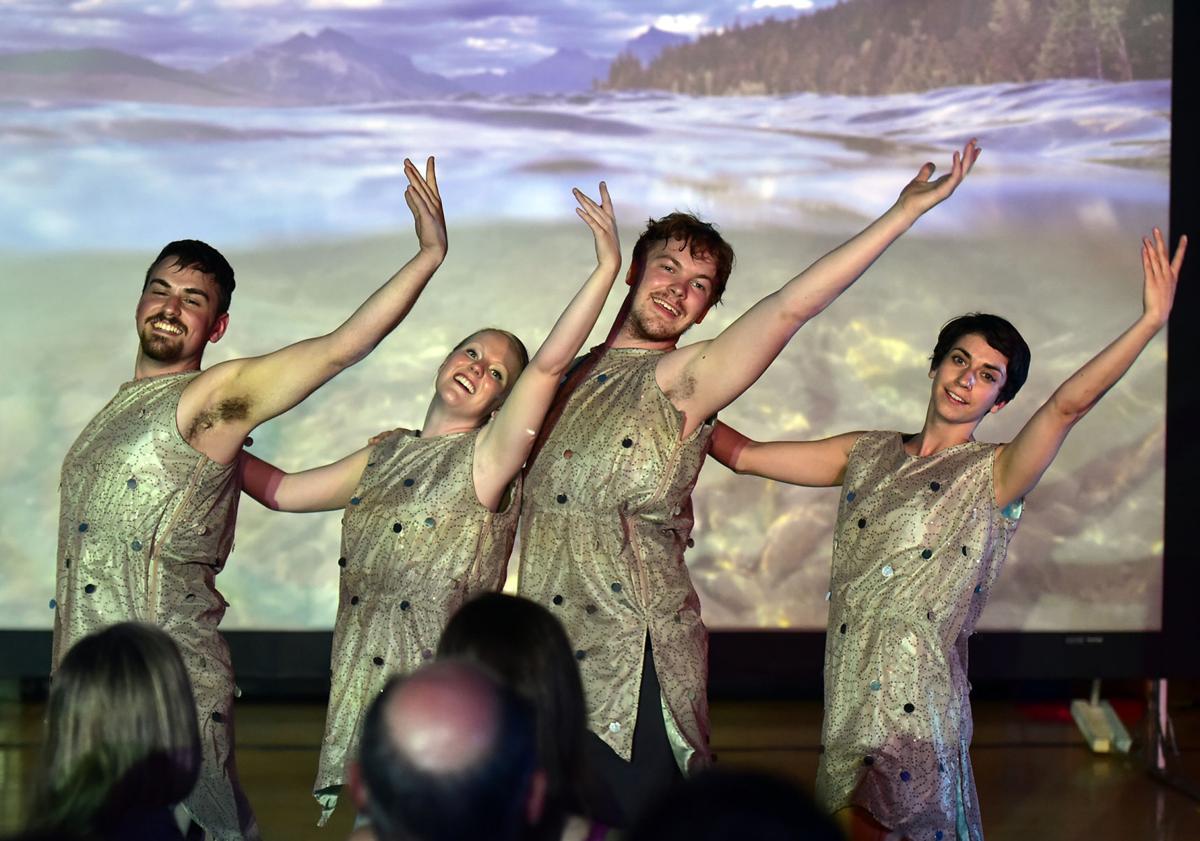 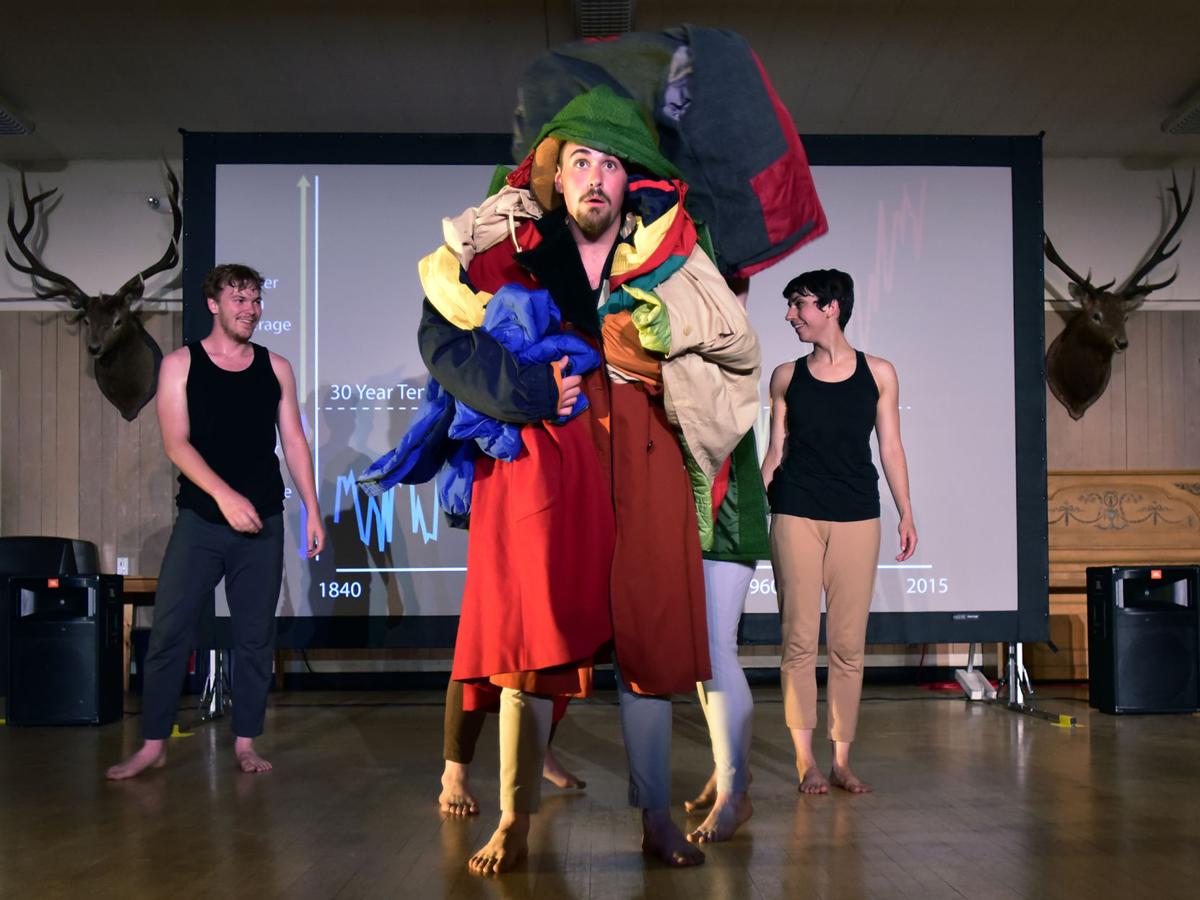 Dancers pile coat after coat on Logan Prichard to illustrate a warming planet. 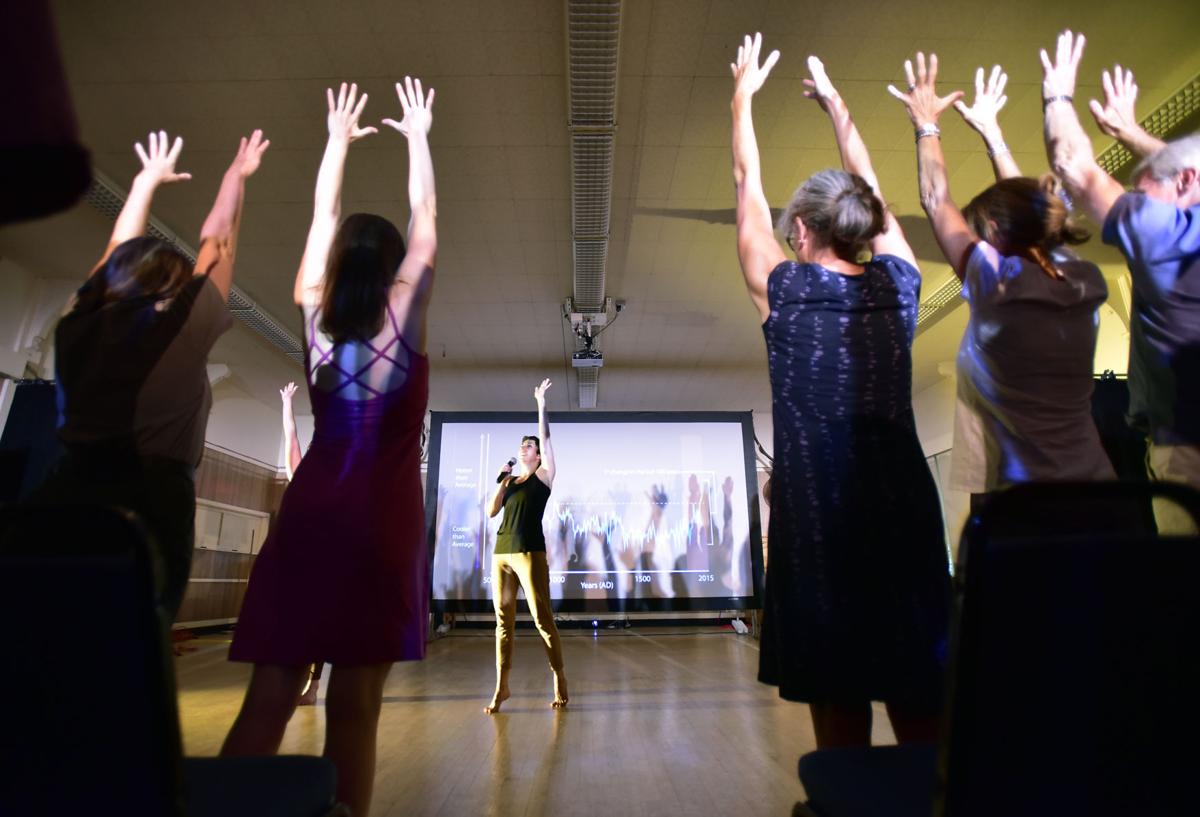 Dancer Ashley Griffith, center, leads the audience through an exercise illustrating how quickly the planet has warmed in the last 100 years. 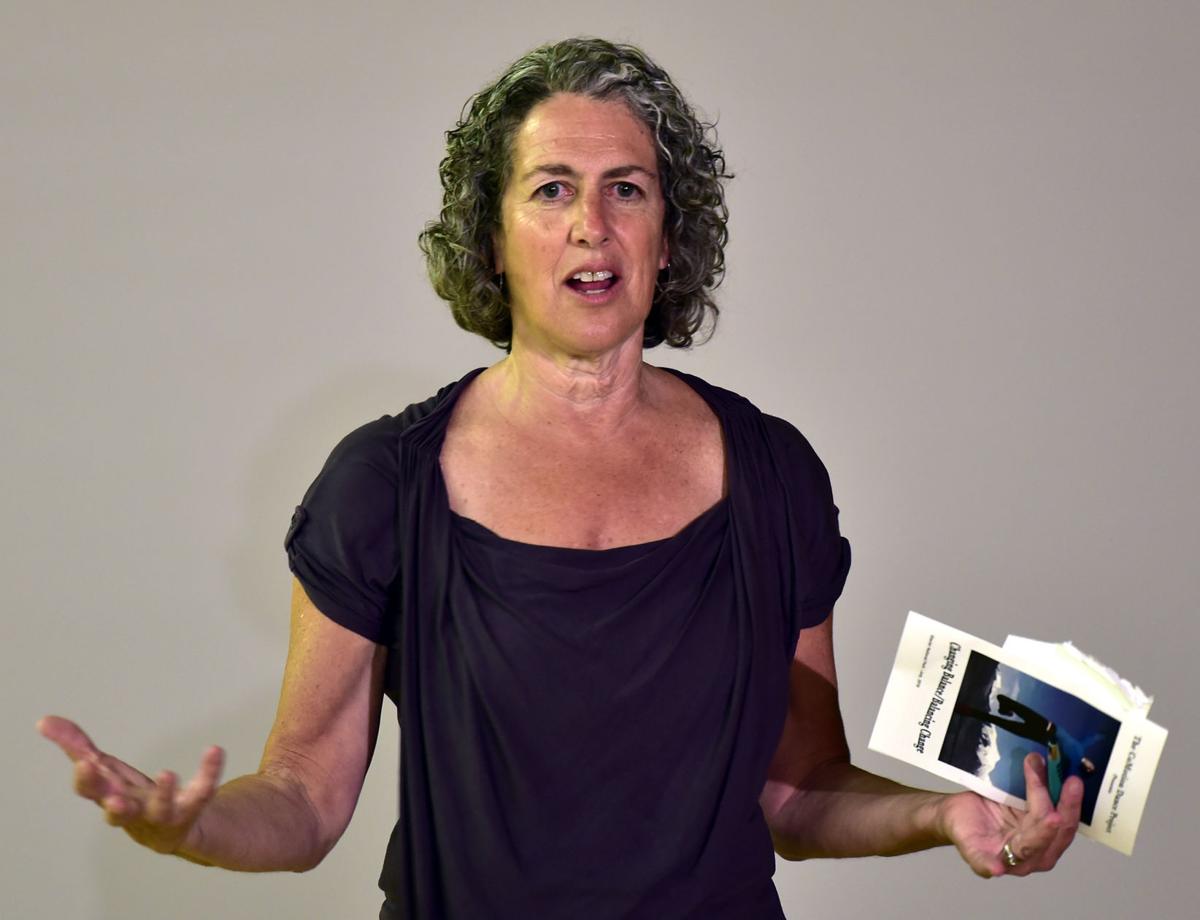 Karen Kaufmann, artistic director of the CoMotion Dance Project, talks to the audience before the performance. 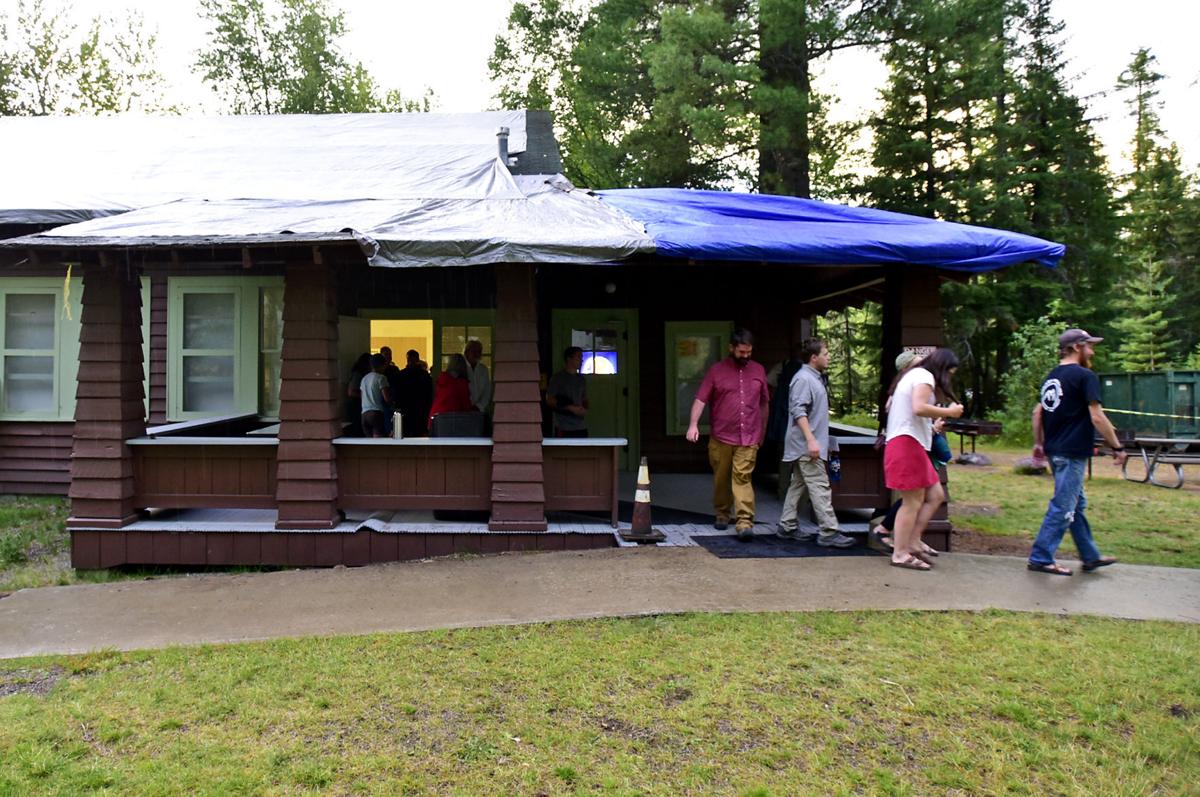 The performance of "Changing Balance/Balancing Change" at the West Glacier Community Center was the last of three in Glacier National Park, where the disappearance of the park's namesake glaciers is a visible sign of a warming planet.

The production uses visual elements on a screen behind the dancers.

Dancers pile coat after coat on Logan Prichard to illustrate a warming planet.

Dancer Ashley Griffith, center, leads the audience through an exercise illustrating how quickly the planet has warmed in the last 100 years.

Karen Kaufmann, artistic director of the CoMotion Dance Project, talks to the audience before the performance.

The performance of "Changing Balance/Balancing Change" at the West Glacier Community Center was the last of three in Glacier National Park, where the disappearance of the park's namesake glaciers is a visible sign of a warming planet.

If someone suggested you watch artists perform an hour-long dance about climate change, you might shoot them your best “have-you-lost-your-mind” look.

When Karen Kaufmann’s phone rang in February 2015 and the caller asked her about putting together just such a production, her reaction, although certainly not the same, at least followed a similar arc.

“I grappled with it,” says Kaufmann, artistic director at the University of Montana’s CoMotion Dance Project. “The topic overwhelmed me. It was not immediately intuitive” how one would go about choreographing climate change.

The person on the other end of the line – Melissa Sladek of the Crown of the Continent Research Learning Center – had seen what Kaufmann and CoMotion had accomplished with “Fire Speaks the Land,” an interpretive dance that tackled the ecology of fire.

That was different, Kaufmann felt. Flames from a fire all but dance above the materials they are burning.

Dancing to the tune of a mass of ice slowly melting away was another story.

As a thunderstorm pushed its way over the west side of Glacier National Park four nights ago, CoMotion launched into the last of three performances in the park that debuted “Changing Balance/Balancing Change.”

It happened in one of the places on Earth where climate change is most obvious. On a landscape that contained 150 glaciers in 1850, only 25 remain in the national park named for them, and scientists predict those will disappear in the next five to 15 years.

“To be performing up here, where the changes are so visible, in the Crown of the Continent power spot, is a great honor,” Kaufmann says.

Like “Fire Speaks the Land,” it’s more than dancers dancing. The performance also uses original music and narration, video production and live interactions with the audience, and merges entertainment with a teachable moment.

The Glacier Conservancy wanted a production with information aimed at a middle school audience – CoMotion will start performing it for that demographic in schools this fall – but adults may learn a thing or three about climate change as well.

Zane Emstad of Anoka, Minn., who attended Wednesday’s performance at the West Glacier Community Center after reading about it in the Hungry Horse News, wasn’t one of them.

“It didn’t tell me anything I didn’t know,” Emstad said.

However, Emstad is a scientist – a chemical engineer – who still found the performance “beautiful.”

“It’s information that needs to be repeated,” he said. “I thought it was absolutely effective.”

Emstad has been visiting Glacier for 10 years now. He sums up the park’s vanishing glaciers in a word.

Part way through “Changing Balance/Balancing Change,” dancer Ashley Griffith was leading an audience of park visitors through an exercise that graphically demonstrated to them how rapidly the earth’s climate is changing.

The planet has been warming, they had learned through the dance, long before greenhouse gases were a concern – at a rate of about 1 degree every 1,000 years.

Now, with more greenhouse gases in the mix, it’s 1 degree every 100 years.

With one second representing a century, Griffith had the audience doing a dance move to represent an increase of one degree – crouching over and touching their toes, then rising up and stretching their arms toward the sky.

Half the audience took 10 long seconds to slowly go from crouching to hands held high.

The other half made the same move in a split second. It’s a visual counter to deniers who shrug off climate change by pointing out that the planet’s climate has always been in flux.

Of course it has. But never have those changes been coming as fast and furious as they are now, the dance demonstrates.

At another point, its narration and musical lyrics argue another oft-heard comment – that, any time the temperature dips below zero or a big snow falls, it’s proof that climate change is a hoax.

Hip-hop lyrics in one of the songs, “The Balance,” reinforces the theme.

“This is talking about the current forecast,

“Not the climate moving too fast for us to last!”

In other words, it’s not a cold spell in January that matters, but the fact that spring starts earlier and warms up faster, summers are hotter than they’ve ever been, and autumn lasts longer and cools down more slowly.

“He’s the brains behind it,” Kaufmann says.

It was Kalling’s job to educate himself about the science of climate change, and then “explain it in a way I could understand it, and choreograph it,” she says.

Beyond that, Kalling scored the entire 60-minute performance. The list of musical genres in play during the production – jazz, bluegrass, rhythm and blues, soul, rock, pop, classical and hip-hop – is long.

The list of Missoula musicians involved is even longer, and includes Sean Parson, The WhizPops!, the Joan Zen Band and The Captain Wilson Conspiracy.

In addition to the script written by Kaufmann and Kalling, there were costumes to be designed, images to be gathered, videos to be created, music that had to be mixed and mastered, and a technical director – Zach Hamersley – needed to make it all come together properly on performance nights.

Oh, and one other thing – dancers.

Wiseman, for one, admits he was “a little skeptical” when he heard Kaufmann was trying to build a dance performance based on climate change.

“I didn’t know how she would do that – but from what I’d seen of Karen’s work, I was excited, too,” Wiseman says.

Kinsley was more confident it would turn out well, but that’s because she had also danced in “Fire Speaks the Land.”

Still, she admits, “This is hard.” Climate change “doesn’t innately include movement.”

Both dancers have taken the message of the piece to heart.

“I’ve changed my lifestyle,” Wiseman says. “It’s made me more aware. I’m definitely biking more places than I used to.”

Kinsley says she is always thinking about the “three Rs” the performance encourages – reduce, re-use and recycle.

“Like Jack Gladstone says, if we all change a little something, we can make a big difference,” Kinsley says.

The biggest challenge with climate change, Kaufmann says she learned, may be convincing people who will never see the results that action is necessary now.

“I feel it’s a difficult topic to embrace,” she says, “because even if we make all the changes we need to make, the effects will not be visible for 50 years. In a world of instant, immediate gratification, how do you convince people to make those changes?”

“Dance” may not be the answer that leaps to mind. But if you’ve made it this far in this story, it’s dance that brought you here, and it’s dance that will take middle school students down the same path this fall.

“I’ve been told I need to expand my thinking,” Kaufmann says. “People seem to be saying we should not just be performing this in middle schools in places like Dillon and Polson.”

A national or international tour could come out of it, she believes.

“I think we’ve created something that is highly relevant to all ages,” Kaufmann says. “I feel it’s stunningly beautiful. A choreographer is not supposed to say that, but I’m so proud of what we’ve done with this.”

Montana Artrepreneurship Program teaches artists how to market their work

Not too many years ago, Olive Parker was a single mother living in the Bitterroot Valley, trying to figure out how to send her kids to college…