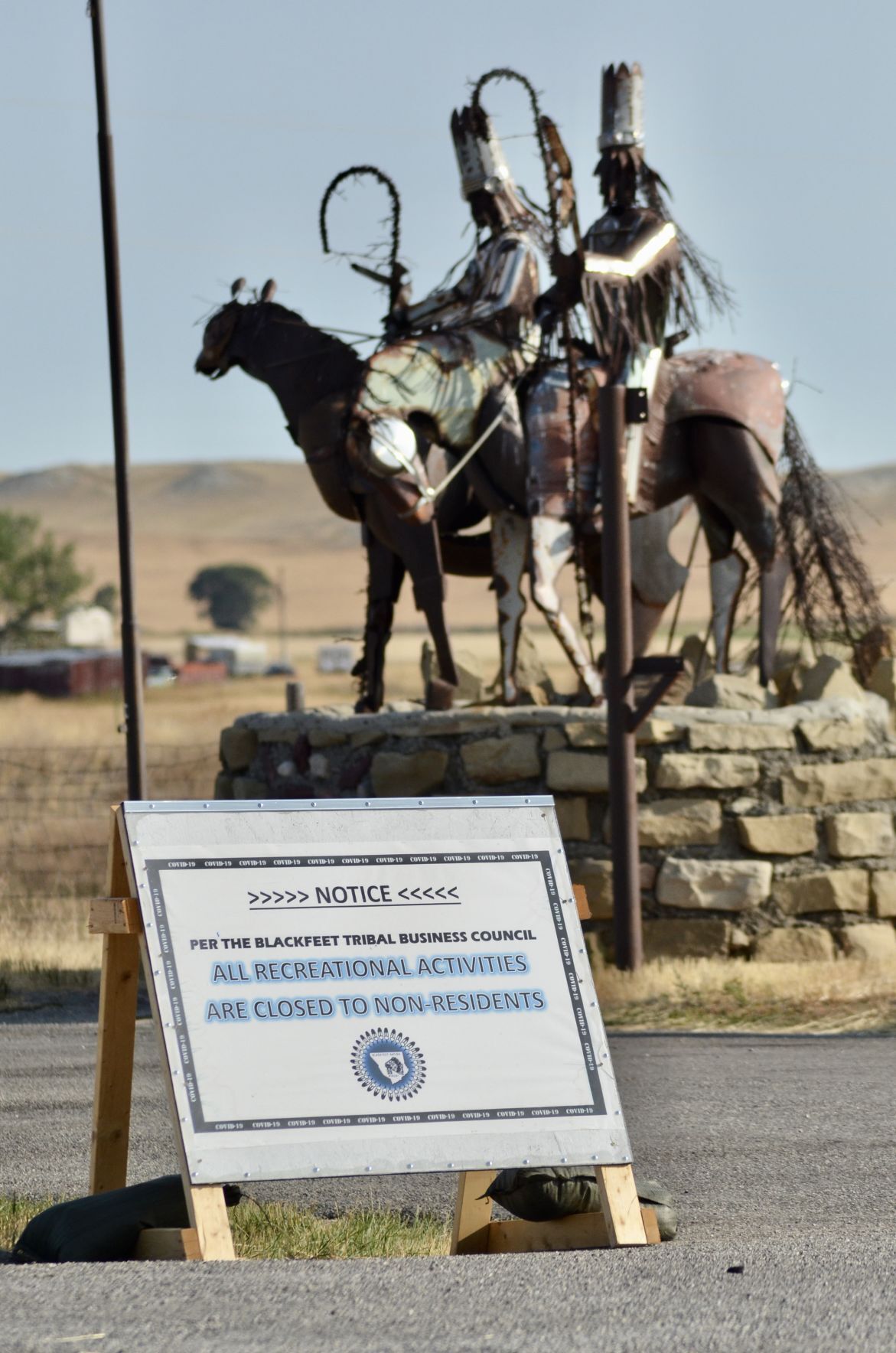 In this March file photo, a warning sign alerts drivers heading toward the Blackfeet Indian Reservation that it is closed to all nonessential and recreational activity due to the COVID-19 pandemic. 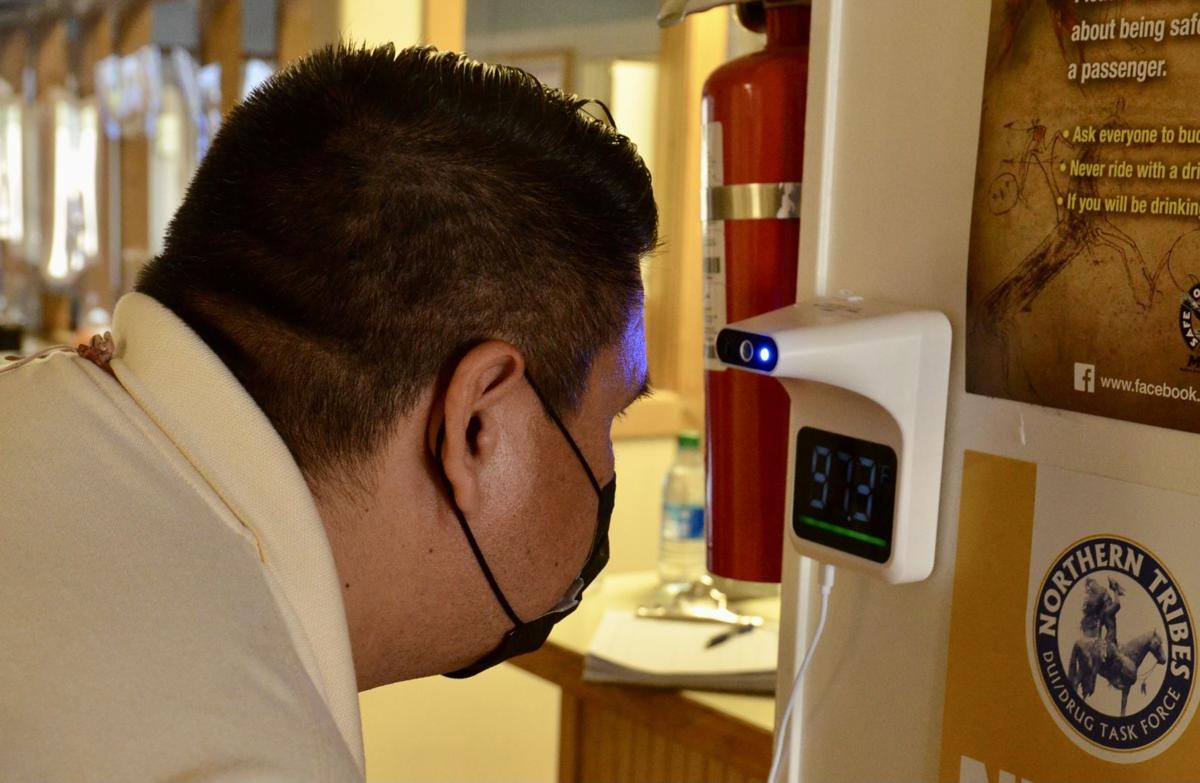 Blackfeet tribal spokesman James McNeeley gets his temperature checked before entering the Blackfeet Tribal Business Council offices. Reservation leaders have closed all nonessential offices and businesses since March to lower the risk of transmitting COVID-19. 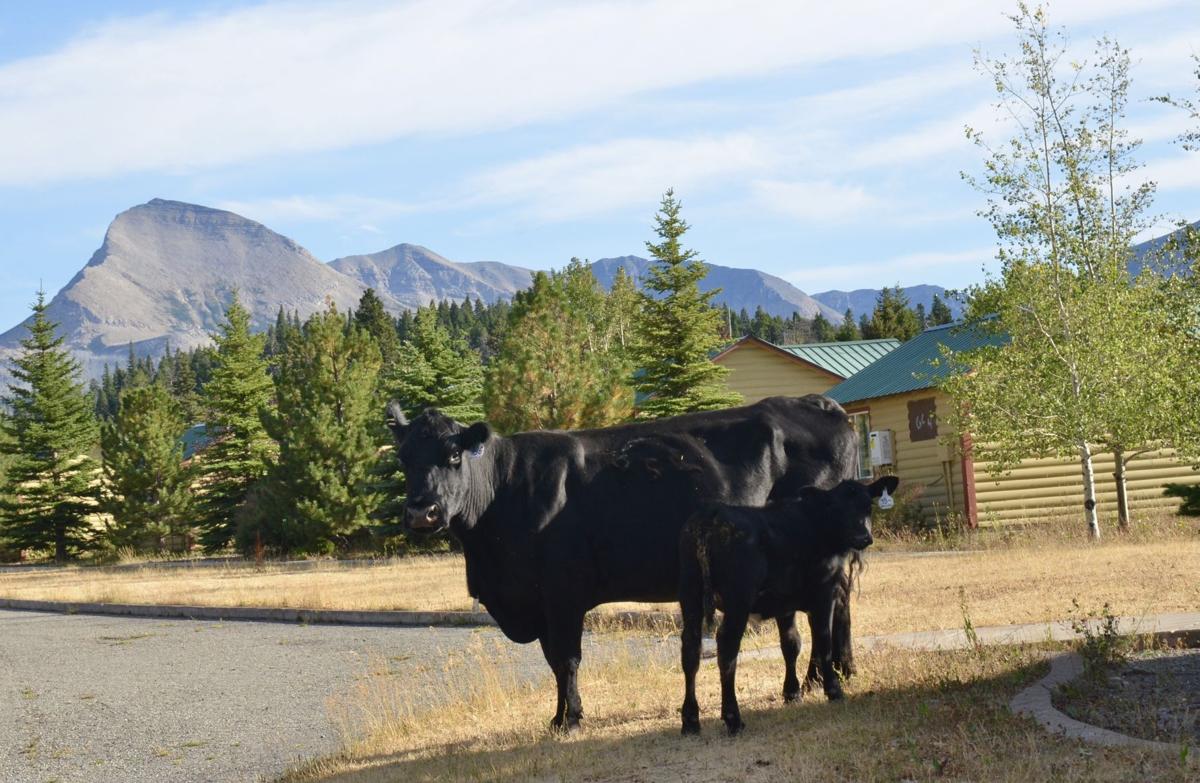 With all east-side entrances to Glacier National Park closed to tourist traffic, the only visitors in downtown St. Mary were wandering cows grazing on lawns in front of empty rental cabins. Access to Glacier Park through the Blackfeet Reservation may remain closed until next spring, according to Blackfeet Tribal Business Council officials.

BROWNING — Just as September turned summer into fall, it blew a chill wind across the Blackfeet Indian Reservation’s seven-month struggle to protect its culture from COVID-19.

The Blackfeet Nation drew national attention last spring when it exercised its sovereign authority to close both its local economy and all access to the eastern half of Glacier National Park in order to limit the spread of the pandemic. Four of Glacier’s six main entrances and three of its major hotel and business hubs were cut off from summer tourist traffic.

Likewise, the roughly 8,000 tribal residents of the Blackfeet Indian Reservation were isolated from the novel coronavirus spreading across the United States and the world. The Blackfeet strategy went a giant step further than those taken by many Indian communities. It kinked the hose that pumped most of the annual 3 million souvenir-seeking, hotel-sleeping, grocery-buying visitors through the economy of an otherwise moribund part of Montana.

And it seemed to work. While other parts of Montana saw numbers spike into the hundreds over the summer, particularly around the Crow, Northern Cheyenne and Fort Belknap Indian reservations, Blackfeet edged up toward 60 with only one death.

Now Glacier County is the ninth-hardest hit in the state with 443 total cases. The sudden change had many wondering if the sacrifices made, the lost summer jobs and income, was for nothing. Or did the decision to buy time prepare the reservation for what could be an even harder pandemic winter?

A frequently heard quip described the situation on the Blackfeet Indian Reservation: “If unemployment is 10%, you’re in a recession; if it’s 15% you’re in a depression. If it’s 75%, you’re in Browning.” In other words, shutting down an economy in an already impoverished place might not have been that big a step, especially compared to what was at stake.

“We understood early the compromises that we were putting in place, but we adamantly said it’s life before dollars,” said Blackfeet COVID-19 Incident Commander Robert DesRosier. “The mentality was to protect our elders and our youth — our most vulnerable population that we have responsibility for. And we were able to hold off that virus and keep it out of the community for over 100 days here. I think we went 105 days without having a local case.”

The Blackfeet Nation is among the largest American Indian tribes in the United States with about 17,000 enrolled members. Just under half of them live in the 1.5-million-acre reservation along the Canadian border. That may seem like a lot of space for social distancing. But a tradition of communal, multi-generational family housing makes it uniquely vulnerable to a disease that spreads through the air by close contact.

“We are probably down to counting our full fluent speakers on both hands now,” said Blackfeet tribal spokesman James McNeeley. “There’s probably about 50 that can understand and speak somewhat, but we’re down to that very few and that’s something we’ve been working on over the years to preserve our language. The late Darrell Robes Kipp said it best — that if we ever lose our language, we lose our identity.”

This story would have ended very differently if it had been published three weeks ago. Until mid-September, the tribe’s decision to shut out the outside world appeared to also shut out the coronavirus. The big hotels, small businesses and the National Park Service acquiesced to the tribe’s command, with some grumbling but no lawsuits. Motorists were allowed to get gas and food in Browning but asked to keep moving. Visiting the reservation for this reporting required approval from the Blackfeet Tribal Business Council and a written permit to travel.

From March to August, the Blackfeet Indian Reservation and Glacier County were noticeably absent from statewide COVID-19 case reports. Many days passed with no new confirmed cases, and active cases hovered in the single digits.

Meanwhile, the Crow Indian Reservation and Big Horn County, which also have lots of tourist traffic heading to Yellowstone National Park and Little Big Horn Battlefield, comprised the only state hot spot without a significant population center. The others during the early August case surge were Flathead, Lake, Missoula, Lewis and Clark, Cascade, Madison, Gallatin and Yellowstone .

Then came mid-September. A funeral and gathering in the reservation's Babb area triggered an outbreak of active cases and a 14-day mandatory quarantine on the reservation on Sept. 17. On Sept. 19, there were 53 active cases. By Sept. 24, the number was 83.

That day, the Blackfeet Tribal Business Council ordered a new 14-day mandatory shutdown starting on Sept. 28, to give people time to stock up groceries and other supplies. Several hundred people were already in quarantine for exposure.

On Oct. 5, the council ordered the reservation to remain closed to nonessential travel through the end of October. A team from the Montana National Guard arrived to help drive ambulances, deliver food and provide nursing care after the tribe’s essential workforce was too depleted by infections and self-isolations to function.

“We had an over 300% increase in cases from Sept. 22 to this first week of October — from 69 to over 400,” said Tribal Chairman Tim Davis. “Our original plan was to start reopening around Labor Day. Then we had the big outbreak. All of a sudden, we fell into the same ways as all the other people around us.”

Davis said access to the east side of Glacier Park might not resume until next spring, presuming a vaccine or treatment for COVID-19 becomes available.

So what happened? Did the disease finally break through the defenses? Was it just luck that the Blackfeet numbers had stayed low so long?

Perhaps a better question is: What might the alternative have been? The Blackfeet Nation is one of the hardest-hit Montana counties in October, but its total cases still trail behind reservations like Crow and Northern Cheyenne that have had far more deaths. And its spikes come months after the rest of the United States had to endure frightening shortages of personal protective equipment like masks and gowns; big improvements in test and treatment quality; and a research race that much closer to a potential vaccine or cure.

The Blackfeet Tribe’s decision to halt nonessential access to the reservation and close the border with Glacier National Park on March 28 was unprecedented. But the threat wasn’t.

“Studies have shown that Native Americans throughout the U.S. have a different type of immune system,” said McNeeley. “We have a higher rate of diabetes, heart disease and other contributing factors here that make us more vulnerable to diseases. As you know, we went through the smallpox epidemic back in the 1800s, which wiped out two-thirds of the Blackfeet Confederacy in its entirety. Then the Spanish flu that came in 1918 wiped out some more of us.

“So if COVID was to come on the reservation and wipe out a lot of our people, we would be lost as a culture."

About the Pandemic Defense series

In partnership with Solutions Journalism Network and the University of Montana School of Journalism, the Missoulian spent the summer of 2020 studying how the Blackfeet Indian Reservation responded to the COVID-19 pandemic and how its solutions fared. In a series of special reports, student reporters Kylie Mohr, Victor Yvellez and Mary Auld along with Missoulian staff writer Rob Chaney will examine:

• How the decision to close the Blackfeet Indian Reservation played out

• How deeply the risk of pandemic affected the Blackfeet tribal community

• How similar exercises in tribal sovereignty to confront a dangerous disease have affected Indian Country throughout the United States.

• What permanent changes have resulted from the Blackfeet strategy to combat the virus.

A full liquor license and a beer and wine license are for sale in Missoula. New Heritage Trail Dinner Tours, featuring a 90-minute guided walking tour and a meal at a fine-dining restaurant, have been launched by the Downtown Missoula Foundation.

“I’ve never met anyone in Flathead County that has asked me to take over their government,” said Montana Governor Steve Bullock. “It can’t all be solved from Helena. There’s local responsibility to do what they can to curb this virus.”

All told, the state of Montana counted 1,051 open beds, 247 COVID-19 patients, and 1,466 other patients, in a report this week from the state health department.

The COVID-19 pandemic presented stark choices to people on the Blackfeet Indian Reservation: Protect the economy or protect the culture?

ShyAnn Raining Bird, a 29-year-old mom, political organizer and member of the Blackfeet Nation, tested positive for the coronavirus on July 7.

Across the country Native American tribes are using their self-governing powers to enact stricter rules than many state and county governments.

Moment rare 'comet' is spotted flying over a UK town

Moment rare 'comet' is spotted flying over a UK town

In this March file photo, a warning sign alerts drivers heading toward the Blackfeet Indian Reservation that it is closed to all nonessential and recreational activity due to the COVID-19 pandemic.

Blackfeet tribal spokesman James McNeeley gets his temperature checked before entering the Blackfeet Tribal Business Council offices. Reservation leaders have closed all nonessential offices and businesses since March to lower the risk of transmitting COVID-19.

With all east-side entrances to Glacier National Park closed to tourist traffic, the only visitors in downtown St. Mary were wandering cows grazing on lawns in front of empty rental cabins. Access to Glacier Park through the Blackfeet Reservation may remain closed until next spring, according to Blackfeet Tribal Business Council officials.