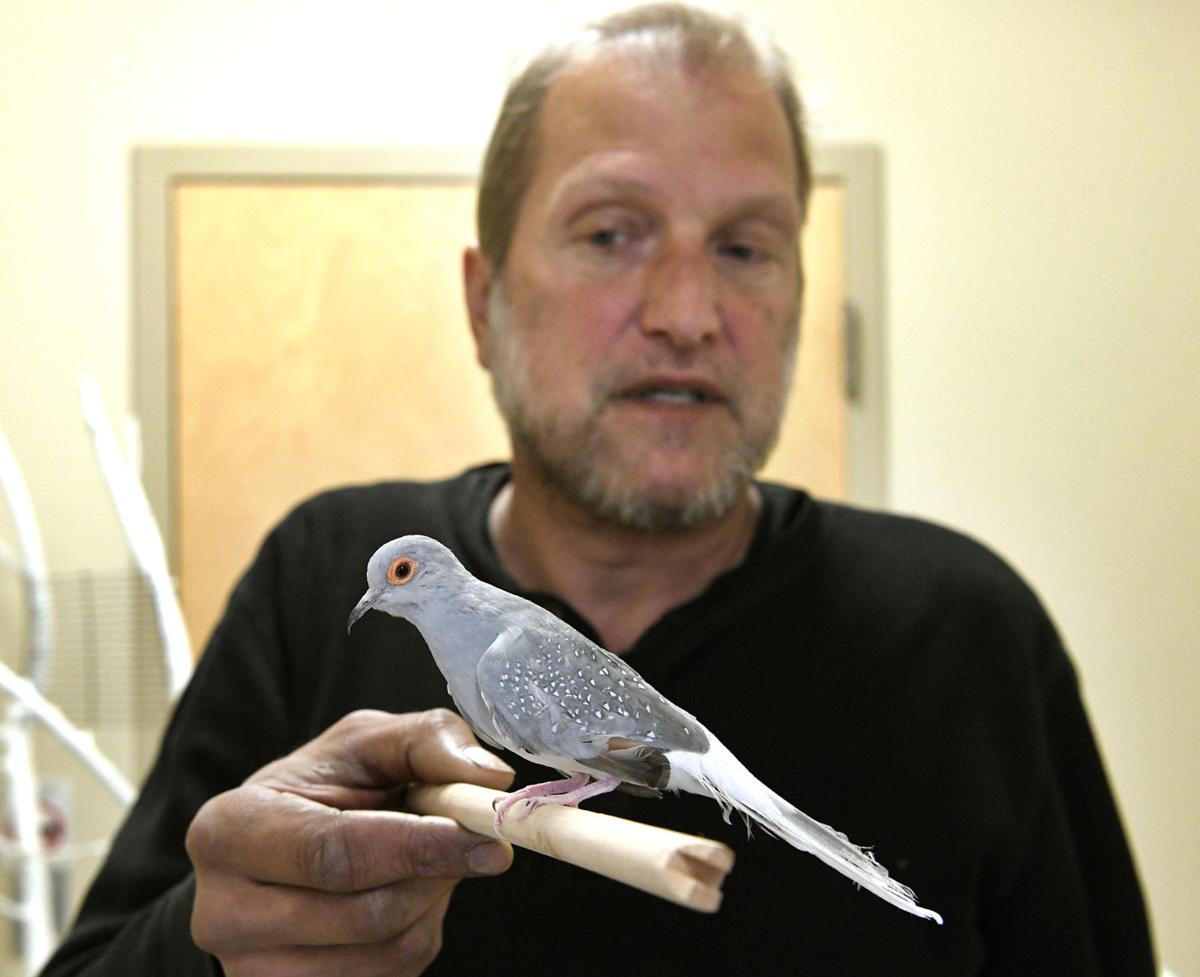 Bret Tobalske, a professor at the University of Montana and the director of the Field Research Station at Fort Missoula, holds a diamond dove at the research station on Monday. Last month, the journal Science estimated that bird populations in North America have declined by 30 percent over the last 50 years. 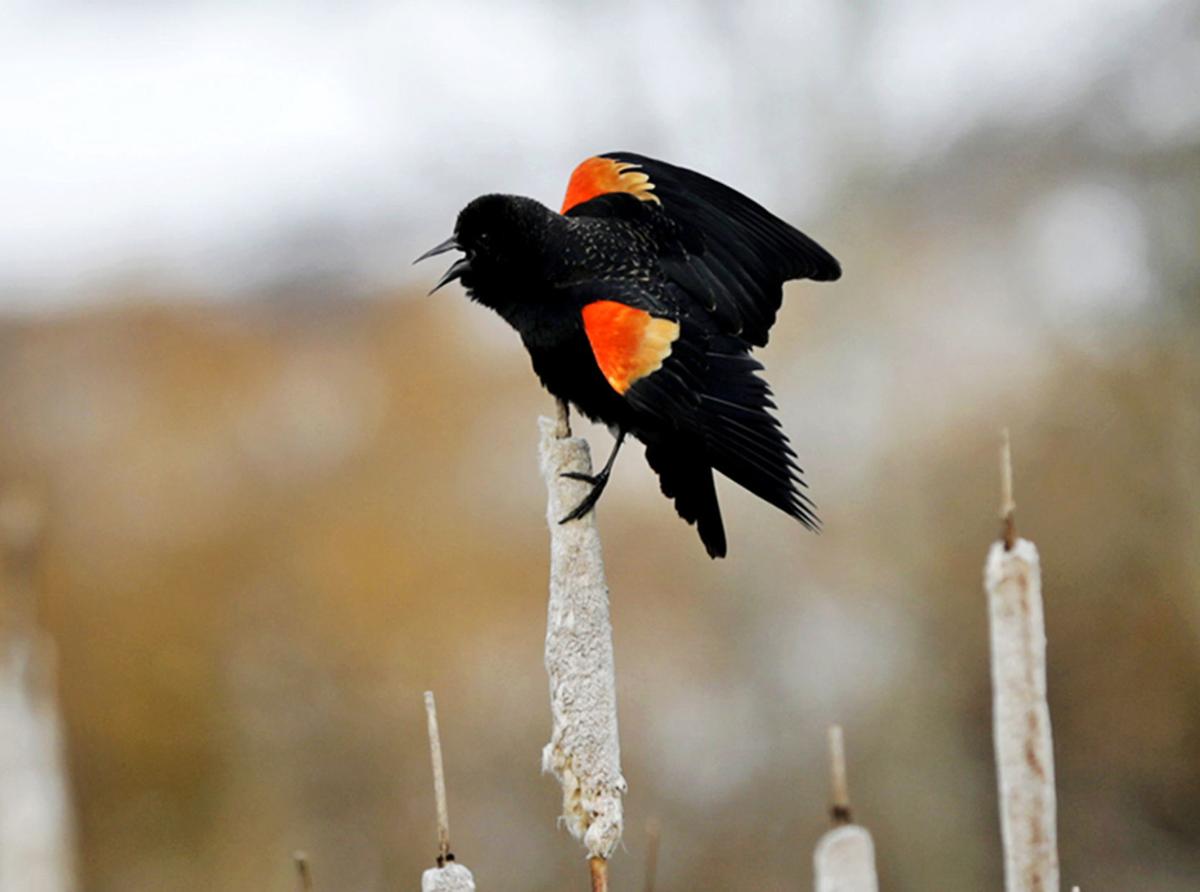 Bret Tobalske, a professor at the University of Montana and the director of the Field Research Station at Fort Missoula, holds a diamond dove at the research station on Monday. Last month, the journal Science estimated that bird populations in North America have declined by 30 percent over the last 50 years.

For years, Tobalske has researched bird flight at the University of Montana’s Fort Missoula Field Station, studying wing movement and air flows with a variety of high-tech methods. Last month, a study published in the journal Science estimated North America now has about three billion fewer birds than it did in 1970. That's a 30% drop over the past half-century.

“A 30 percent decline in the bird population is pretty large,” said Tobalske. Gathering this data is tricky, and the broad trend shakes out differently for different species and regions.

For example, a recent report noted Montana's greater sage grouse population has fallen more than 40% over the past three years. But the U.S. Fish and Wildlife Service noted last month it's close to concluding efforts to re-establish trumpeter swans in the Blackfoot watershed.

In response to the Science study, though, both scientists and birdwatchers say the results bolster the need for conservation.

The study’s authors drew data from two types of sources. One was high-tech: bird flock detections by weather radar. The other was low-tech: decades’ worth of on-the-ground bird observations, largely gathered by “citizen scientists.”

Larry Weeks has gathered the latter type of data in Missoula, coordinating the Five Valleys Audubon Society’s annual Christmas Bird Count. This once-a-year snapshot doesn’t show any clear trend. Over the past two decades, the total number of birds counted has ranged from 5,006 in 2002 to 13,944 in 2005, according to data he sent the Missoulian. The total number of species, meanwhile, has steadily inched up from 71 in 1999 to 85 in 2018.

“I can’t see any drop in total number,” he told the Missoulian. “The total number of our birds that we get in the Christmas bird count is dependent on whether or not the bohemian waxwings come into Missoula” when the count happens. He attributes the greater number of species logged, meanwhile, to an increase in the number of volunteers.

The study’s authors arrived at their estimate by combining counts like these with weather radar data, which can detect large masses, like bird flocks, moving through the sky. They show that “biomass passage,” or bird traffic, declined most heavily in the Midwest and along the East Coast, while the Rockies and West Coast saw gentler declines and even some upticks.

But Montana’s ornithologists — both professional and amateur — aren’t celebrating.

Both Weeks and Larry Berrin, executive director of the Montana Audubon Society, recalled that hawks used to snipe insects from around the Missoula area but have since vanished. And even if other regions of the country are losing more birds, Montana’s grasslands are home to some of the birds that are suffering the most. The study separated out birds by breeding biome, and found that those that breed in grasslands are down by 53% — more than 717 million birds — since 1970. This category includes the western meadowlark, Montana’s state bird.

“The loss of 53 percent of our abundance of grassland birds is not something we take lightly,” said Berrin, with the Montana Audubon Society. He identified habitat loss as the single largest culprit in the birds’ decline. To describe their role in the grassland ecosystem, both Berrin and Tobalske used an apt, if well-worn, metaphor: the “canary in the coal mine.”

Miners once brought canaries underground. If they dropped dead, it was a sign of toxic gas in the shafts. Tobalske said the grassland birds’ plight could similarly spell trouble for the ecosystem. “If something that's obviously part of the system is showing severe problems, that's a pretty strong indicator, like in the mine situation, that the system as a whole might be in serious trouble.”

For now, he said, the Treasure State’s prairies are relatively healthy. “What we do have is open space, and I think on a continuum of states Montana’s in pretty good shape.” On “Mount Sentinel (and) Mount Jumbo, we're staring at enormous grassland all the time. There's amazing diversity up there. There's really exotic lazuli buntings (that) use that hill.”

As Missoula grows, “there's some way to recruit ecologists and say, ‘OK, what can we do to keep meadowlarks and the sparrows happy?’” Tobalske singled out Missoula’s Old Sawmill District as an example of development that incorporated bird habitat. Outside the urban core, he said his own area of study — bird flight — could help site wind turbines in safe locations.

Montana Audubon, meanwhile, is working on a program to preserve bird habitat on ranches — and produce what Berrin calls “bird-friendly beef.” He also said the Land and Water Conservation Fund is vital to preserving bird habitat.

“Life is pretty resilient,” Tobalske said. “There's a great deal of scope for recovery and recolonization. Birds could actually be the first messengers of that.”

The ongoing enrollment drops at the University of Montana have earned a stark distinction for the campus: The Chronicle of Higher Education re…