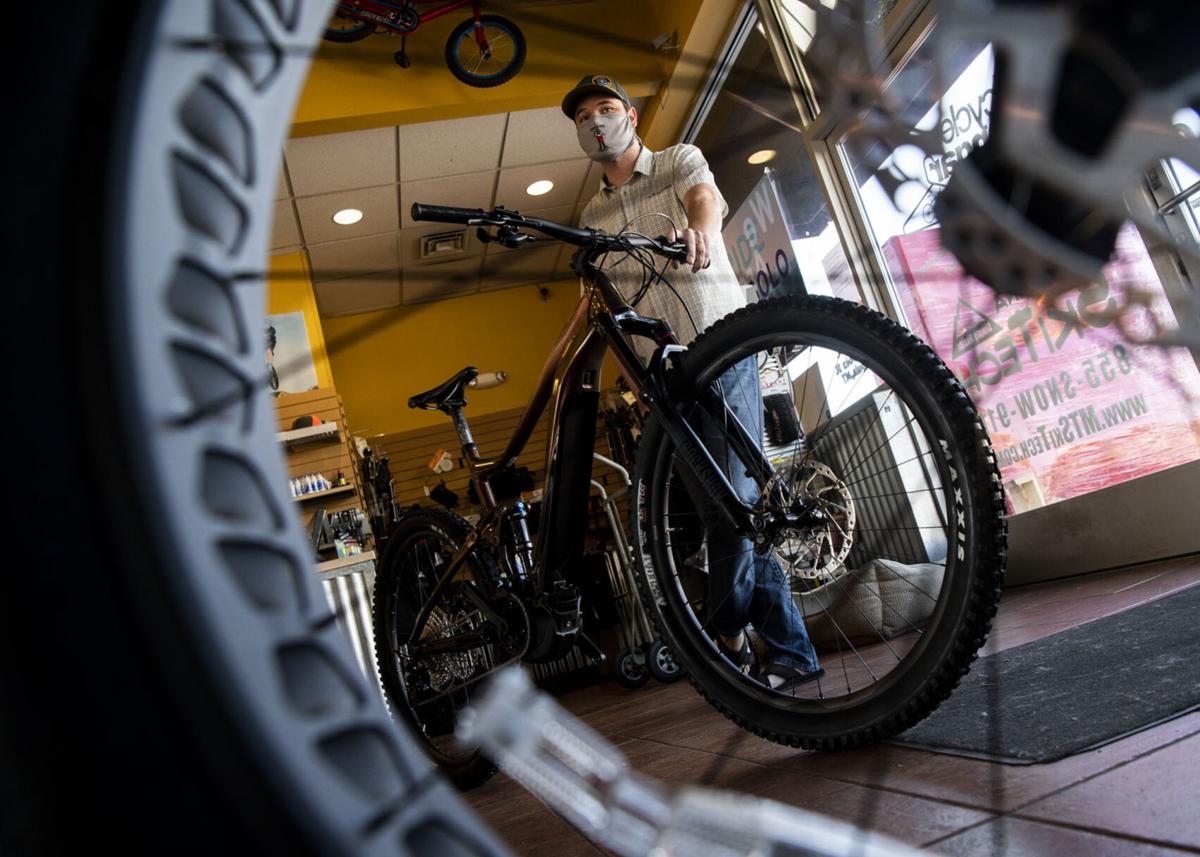 Peter Kern, owner of The Bicycle Hangar, stands with an electric bike at the shop on Tuesday afternoon. A new proposed federal rule could change e-bike policies at the departments of the Interior and Agriculture which would open up miles of backcountry trails to those who wish to ride. 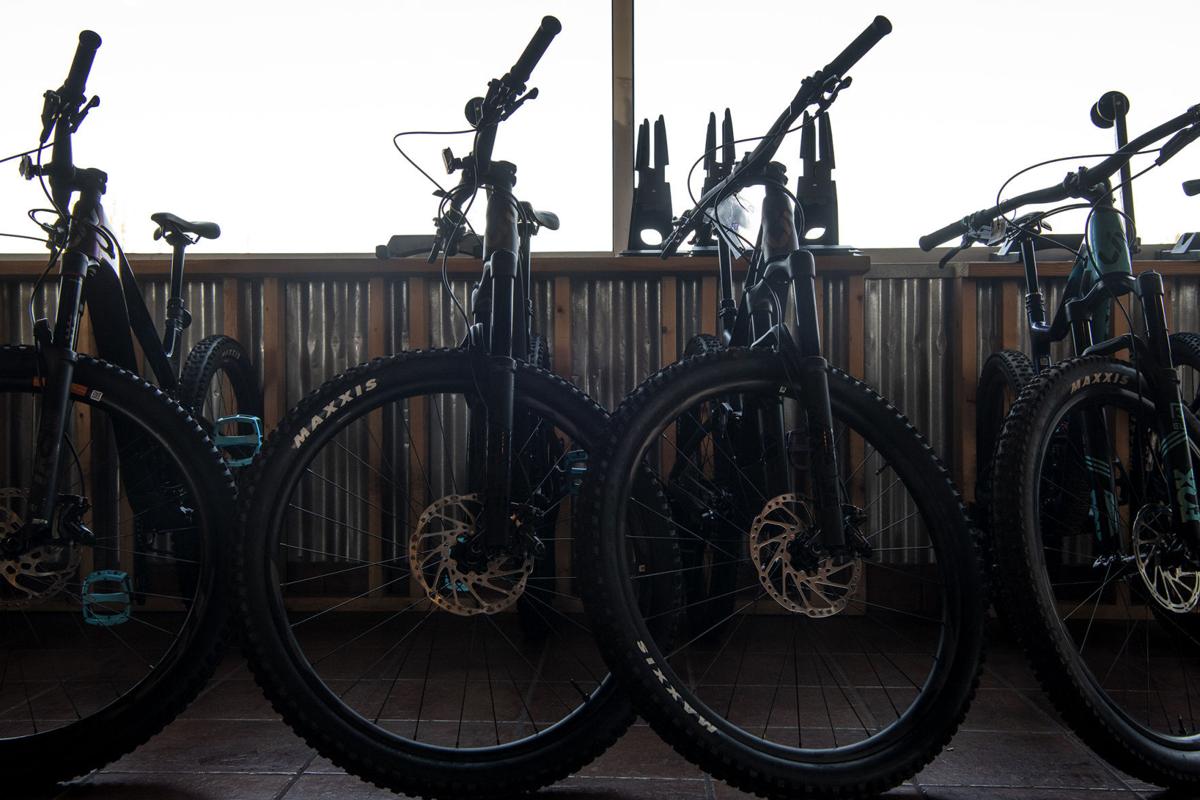 E-bikes add an electric motor to the chain of a pedaled bike allowing for 'pedal-assist' while others can power uphill without pedaling. 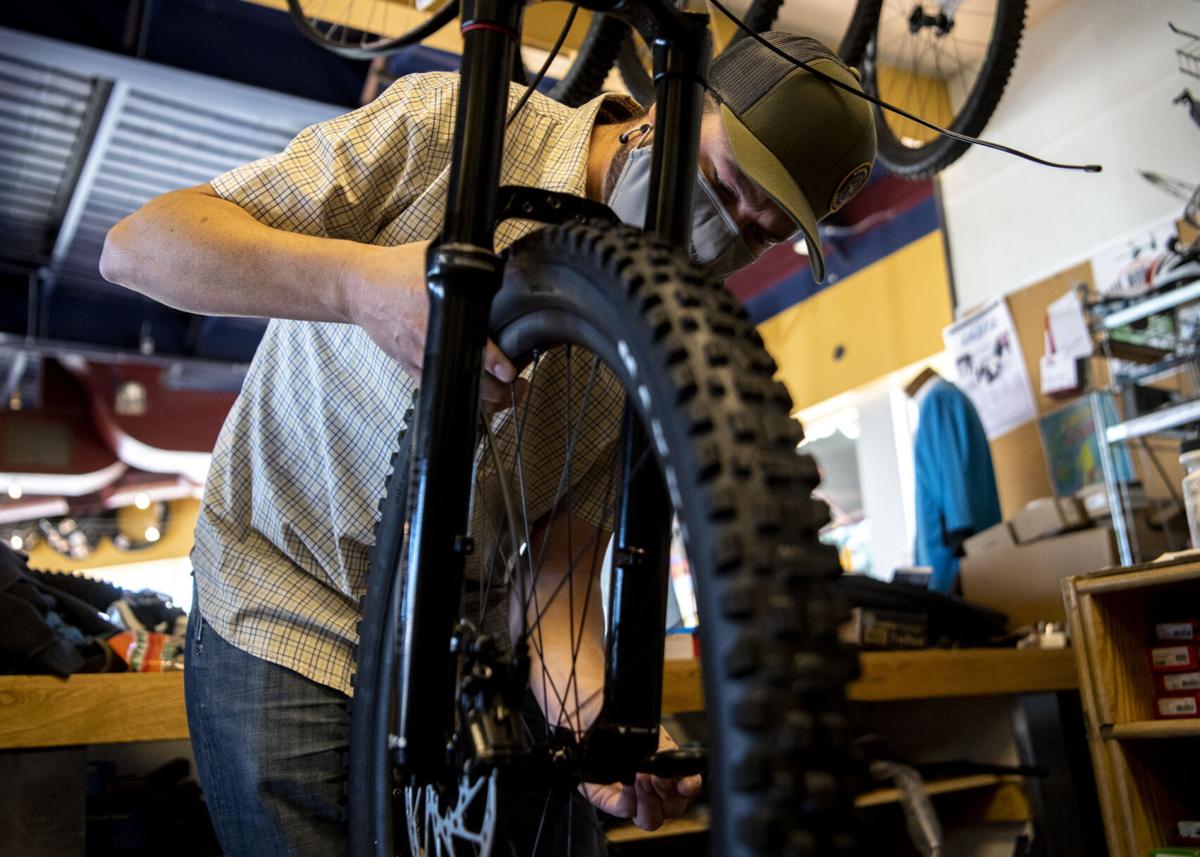 Peter Kern puts a wheel on an e-bike on Monday afternoon at his shop.

Hunters have to make lots of quick decisions in the field: Cock or hen pheasant? Brow-tine or spike bull elk? Pedal or power-assist bicycle?

New and proposed federal rule changes could open up miles of backcountry trail to superhuman access this fall as the departments of Interior and Agriculture rearrange their e-bike policies. The shift has hunters and hikers on the fence, trying to decide where power-assisted wheels fall in the principles of fair play and fair chase.

“Our state policy director packed out an elk on his e-bike last year, but it was on a motorized road,” said Backcountry Hunters and Anglers Conservation Director John Gale. “When I was hunting last week, I saw a guy cruising uphill on a bike. When I got closer, I could see he had a motor on the bike. They look like fun, and I’m sure they are, but I don’t want to see them on trails where motorized use is excluded.”

E-bikes add an electric motor to the chain drive of a pedaled bicycle. Some versions provide “pedal-assist” making it easier for the rider to ascend hills. Some motors can power uphill without pedaling at all. Compared to an internal-combustion engine on a traditional motorcycle, they’re virtually silent.

On Aug. 29, 2019, Interior Secretary David Bernhardt called for “increasing recreational opportunities through the use of electric bikes with a secretarial order. That put land managers in the National Park Service, Bureau of Land Management and other Interior branches on notice that e-bikes should be considered in the same category as pedal-powered bicycles — not as motorized vehicles.

The Forest Service, which is under the Department of Agriculture, is considering a similar move. While Interior’s declaration had no public process or National Environmental Policy Act review, the Forest Service is going through a public comment period and review this fall. Under the Obama Administration, it had concluded that e-bikes were motorized vehicles allowed only where other motorized vehicles were permitted. That guidance could be changed under the new review.

On Sept. 24, the Forest Service published its proposed e-bike policy in the Federal Register. It would “establish promotion of e-bike use on NFS (National Forest Service) lands as a policy,” add e-bikes to the definition of “bicycle” and encourage site-specific decision-making to allow e-bike use on federal lands. The proposal is up for public review through Oct. 26.

“The laws around the country have just been fuzzy,” said Bicycle Hangar owner Peter Kern. But the interest in e-bikes has been growing wildly since he started carrying them a decade ago. And the opportunities they provide to riders have been appreciated as well, he said.

“I sold one to a guy six or seven years ago who bowhunts with a handicapped access permit,” Kern said. “He has permission to drive through the gates, but when he does, all the animals are gone. So he’s got one with a step-through frame so he doesn’t have to lift his leg over, and it’s got a custom scabbard. People use them in lots of different ways.”

An old hunter’s adage says the best big-game country is two miles away from any road. Bicycle-based hunting has grown in popularity as the gear has decreased in weight and increased in functionality. Adding electric assist to the equation makes the work that much easier.

BHA's Gale said the problem was Interior’s plan to carve out e-bikes from the group of motorized vehicles in travel-planning decisions. In testimony on the Department of Interior’s e-bike rule this summer, he argued that would put many more users in the backcountry unprepared to handle the load.

“Categorically allowing an additional class of motorized use and a new group of trail users to crowd trails designed for nonmotorized recreation would be irresponsible and ecologically harmful,” the BHA testimony stated. “Accordingly we support existing USFS/BLM policies that prohibit use of e-bikes on nonmotorized trails and roads.”

A 2019 Brigham Young University study found dramatic differences in rider capability on pedal bikes compared to e-bikes. Using a powered bicycle with just a third of the allowable booster force, riders completed a 5.5-mile course with 50 percent faster speed and significantly lower heart rates than those relying on their leg strength alone. That was with a 250-watt e-bike, one-third the capacity of full-strength 750-watt e-bike boosters.

As a Harvard Law Review article noted, the wattage matters. The Consumer Product Safety Act defines low-speed e-bikes as those with motors under 750 watts, or one horsepower. But in its guidelines the National Park Service allowed bikes “up to and including 750 watts (to avoid) the unintended consequence of excluding many devices from the regulatory definition of an e-bike due to a one-watt difference in power.”

E-bike motors are built in 250-watt increments. Limiting motors to under 750 watts meant allowing motors in the 250- and 500-watt range. Adding that one extra watt opened the door to the 750-watt motors. In comparison, European safety standards limit e-bikes to 250-watt motors.

More powerful motors mean greater hill-climbing and endurance ability, and greater speed. Smaller-wattage motors can produce speeds around 20 mph, while the 750-watt motors can push a biker up to 28 mph.

Speed matters, for both people and wildlife. Many public trails were designed for foot traffic only and don’t have turns wide enough for fast-moving bikes to negotiate safely. And studies of recreation impact on elk and deer have found that fast-moving visitors on bikes and ATVs have as much as two times the impact as hikers or horseback riders in driving animals away from feeding and resting areas.

That results in “habitat compression,” shrinking the landscape where wildlife feel secure for feeding and raising young as more humans penetrate regions that used to be hard to reach. The consequences are poor feeding, lower calf and fawn survival and reductions in big-game opportunities.

Another issue is the kinds of e-bikes showing up in the woods. For example, some of the most popular models for sale are collapsible versions costing around $500 and available at places like Costco. Those bikes are designed for light riding on paved roads, not gear-hauling on dirt trails.

“Some of these are not made by traditional bike companies,” said Ben Horan of Mountain Bike Missoula. “They don’t have the design insights mountain bike manufacturers have developed over the last decade.”

“It’s like social distancing with Covid, where they’re avoiding people walking on trails or gathering too close,” Hottle said. “When an e-bike goes by, folks on the trail will remind them of the policy. I did the very same thing last weekend. We were on Bass Creek in the Bitterroots, and someone zoomed past me on an e-bike. They were from New York and thought they were just on a regular bike.”

Comments on the Forest Service’s proposed e-bike policy may be submitted electronically to https://cara.ecosystem-management.org/Public/ReadingRoom?project=ORMS-2619. Written comments may be mailed to Director, Recreation Staff, 1400 Independence Avenue SW, Washington, DC 20250-1124. All timely received comments, including names and addresses, will be placed in the record and will be available for public inspection and copying. The public may inspect comments received at https://cara.ecosystem-management.org/Public/CommentInput?project=ORMS-2619.

Extremely unseasonable snow and cold should make the start of the 2020 big-game hunting season a weekend to remember.

Court documents stated that the plank was found on Nov. 4, 2019 by a man who stepped on it while walking with his two children along the Coyote Coulee Trail in the Bitterroot National Forest.

Peter Kern, owner of The Bicycle Hangar, stands with an electric bike at the shop on Tuesday afternoon. A new proposed federal rule could change e-bike policies at the departments of the Interior and Agriculture which would open up miles of backcountry trails to those who wish to ride.

E-bikes add an electric motor to the chain of a pedaled bike allowing for 'pedal-assist' while others can power uphill without pedaling.

Peter Kern puts a wheel on an e-bike on Monday afternoon at his shop.