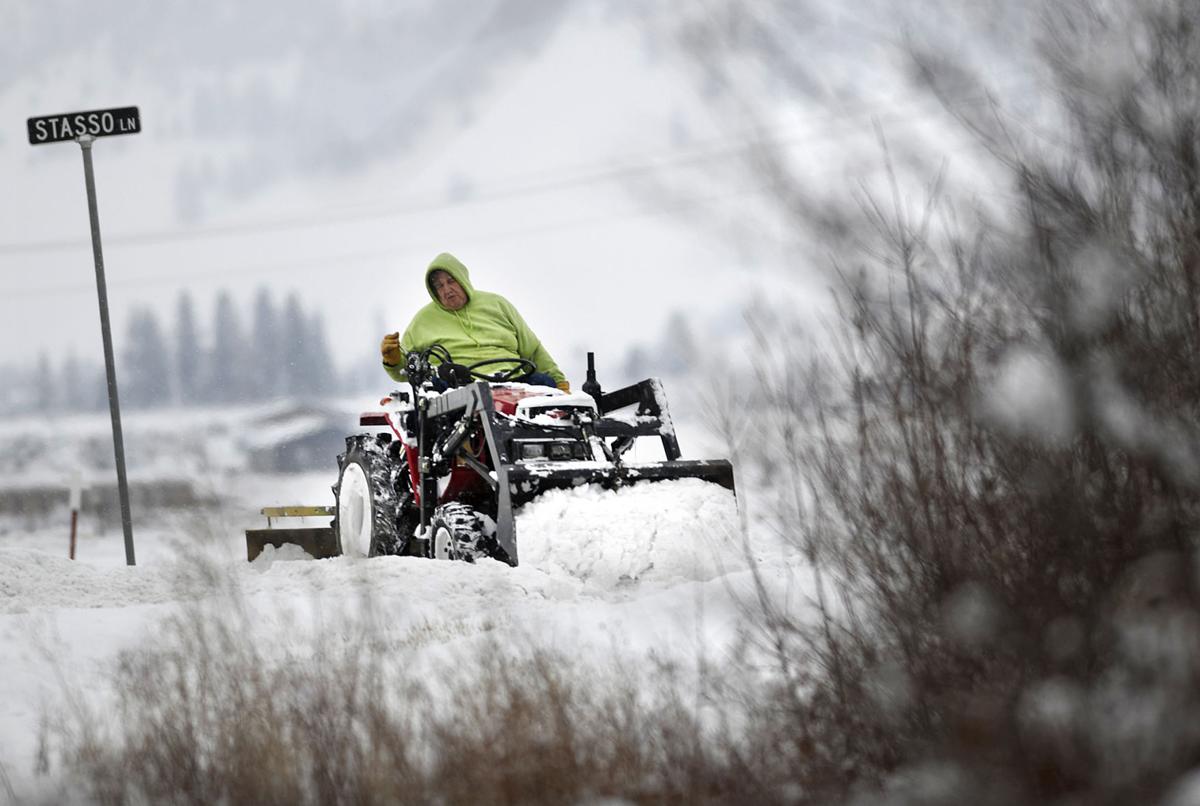 Francis Pierre uses a tractor to dig out an elderly neighbor's driveway on Stasso Lane off of Highway 93 near Arlee on Wednesday afternoon. Missoulians can expect 8-12 inches of snow to fall in the valley beginning on Friday. 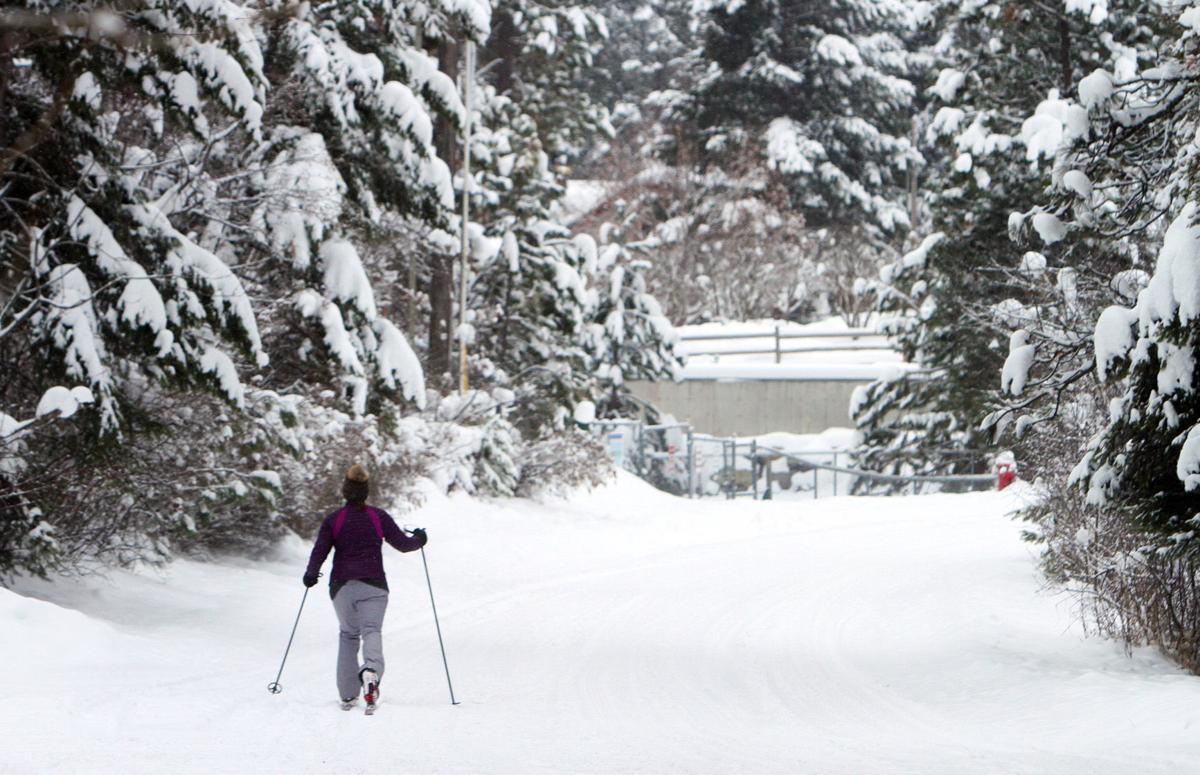 A woman takes advantage of a good base of snow on a road near Woods Bay to get some exercise in with here cross country skis.

POLSON — The crews that work to keep the roads clear and power on are bracing for a busy weekend as a powerful storm packing heavy snow and strong winds has much of western Montana in its cross hairs.

All of western Montana north of a line from Darby to Bozeman was put on a Winter Storm Warning Thursday.

Lookout Pass Ski Area President Phil Edholm said the Montana-Idaho border had picked up about 4 inches of fresh powder on Thursday afternoon. But the real show was expected to start Friday.

“They’re saying we might get up to 4 feet,” Edholm said. “That’s a moving target. Every time you look at the forecast, it changes a bit. Weatherwise, it should all be over by noon on Saturday, and Sunday should be calm.”

The National Weather Service said the next few days will bring a bout of weather that is about as textbook as it can get when it comes to producing large amounts of snow for the Northern Rockies.

The brunt of the storm is expected to arrive sometime Friday afternoon and continue through a good portion of Saturday.

National Weather Service meteorologist Ryan Leach said the morning commute Friday into Missoula should be about the same as what drivers experienced Thursday. But Friday night will be something totally different.

“Those making the trip home tomorrow from Missoula to Hamilton could face some pretty rough driving conditions,” Leach said.

Heavy snows will begin to fall Friday afternoon as an “atmospheric river” that originated in the tropics around Hawaii will overrun a big dome of cold air spilling out of the arctic.

The heaviest accumulation of snow in the valleys is expected around the southern end of the Mission Valley, where about a foot is expected. Missoula is expected to receive between 8 and 12 inches. The Flathead Valley could get upward of 10 inches.

The Bitterroot Valley south of Hamilton is expected to receive about 3 inches of snow.

Wind-prone areas like Missoula’s Hellgate Canyon and Bad Rock Canyon east of Columbia Falls could see sustained winds of 20 mph and even stronger gusts. Strong and persistent easterly winds between 10 to 15 mph with gusts up to 20 mph will create challenging driving conditions for most of northwest Montana on Friday evening into Saturday.

If you have to travel this weekend, Leach said Sunday appears to be the best day.

The road departments for Flathead, Lake and Missoula counties are prepared for the challenging weekend.

“It’s kind of business as usual for us,” Garrick said. “We will be working through the weekend. Everyone is prepared. Luckily right now, school isn’t in session. So we don’t have to worry about buses. Our biggest concern is with emergency services. We want to make sure that they can get wherever they need to go.”

The predicted northeasterly winds could create some major drifting issues in both Lake and Flathead counties.

“Our east-west roads in the northern end of the valley from Evergreen to Columbia Falls and Whitefish are our problem child when we get a north or northeastern wind,” Prunty said. “We can handle a lot of volume of snow, but when it can be a challenge is when you plow a road and look behind to see that it’s closed again.

“I encourage people to give themselves some extra time if they have to get out and drive this weekend,” he said. “Better yet, it would be a good weekend to stay home and watch a football game.”

Polson Police patrol supervisor George Simpson said the department will have some extra patrols out this weekend prepared to help drivers who find themselves in the ditch.

“Last week, we had quite a few slide-ins,” Simpson said. “We had three instances where people crashed into buses. They don’t allow themselves time to stop. People need to make sure that they take into account the conditions of the road.”

The heavy snow expected this weekend will also keep crews hopping to maintain the power grid.

Craig Morigeau, operations superintendent for Mission Valley Electric, said his crews have been busy dealing with sporadic outages created by the heavy snow that accumulated on power lines and surrounding trees last week.

When power lines are weighed down by snow, it creates the potential for what’s called a “snow flop” when the snow suddenly falls off and the line bounces upwards. The result can blow a fuse that can plunge nearby homes into the dark.

The snow can also break off limbs that fall across the power lines and create temporary shorts.

Crews have been trimming any branches that appear to be close to touching a power line.

“That’s been a major focus for us the last few weeks,” Morigeau said. “We are trying to get all those potential problems taken care of before the next major storm.”

The potential of wind is a double-edged sword for electric crews. If it’s not too strong, it can knock some of the snow out the trees and off the lines. But if it comes in with a blast, it can also knock over trees and break branches.

“We don’t want too much,” Morigeau said. “We want just enough to shake out the heavy snow.”

In the backcountry, West-Central Montana Avalanche Center analysts labeled the risk “Considerable” for avalanche danger on wind-loaded slopes. Conditions are expected to change over the next 48 hours as new snow arrives and winds increase in the mountains.

In the northern Flathead Valley and Glacier National Park area, backcountry travelers should see lighter snow levels but more gusty winds Friday and Saturday. Expect between 1 and 2 inches of snow accumulation per hour during the heaviest part of the storm on Friday and Saturday. The Flathead Avalanche Center advisory on Thursday rated risk conditions “Considerable” above 6,000 feet and “Moderate” between 3,500 and 6,000 feet elevation.

“It’s been a number of years since Lake County has had a good snow event, but we have a good game plan in place with the road department and dispatch,” said Lake County Office of Emergency Management Manager Steve Stanley. “People just need to prepared over the next couple of days. You never know what the Good Lord might hand us.”

HAMILTON — Two Montana women are the cover girls on the American Trails winter magazine, which features the Chief Joseph Ski Trails off of Los…

LAKESIDE — A small Montana ski resort is open for the holiday season thanks to a last minute boost from this week's snow.

PHILIPSBURG — What does it take to get up before dawn and try to kill dinner?

POLSON — An afternoon raid on a suspected drug house in Polson netted meth, heroin and LSD on Wednesday.

A tale of two storms: snow and wind north, rain south and Missoula in the middle

With the temperatures hovering around 7 or 8 below zero and snow piled up waist high in the community of East Glacier Park, Charley Wagner was…

Francis Pierre uses a tractor to dig out an elderly neighbor's driveway on Stasso Lane off of Highway 93 near Arlee on Wednesday afternoon. Missoulians can expect 8-12 inches of snow to fall in the valley beginning on Friday.

A woman takes advantage of a good base of snow on a road near Woods Bay to get some exercise in with here cross country skis.