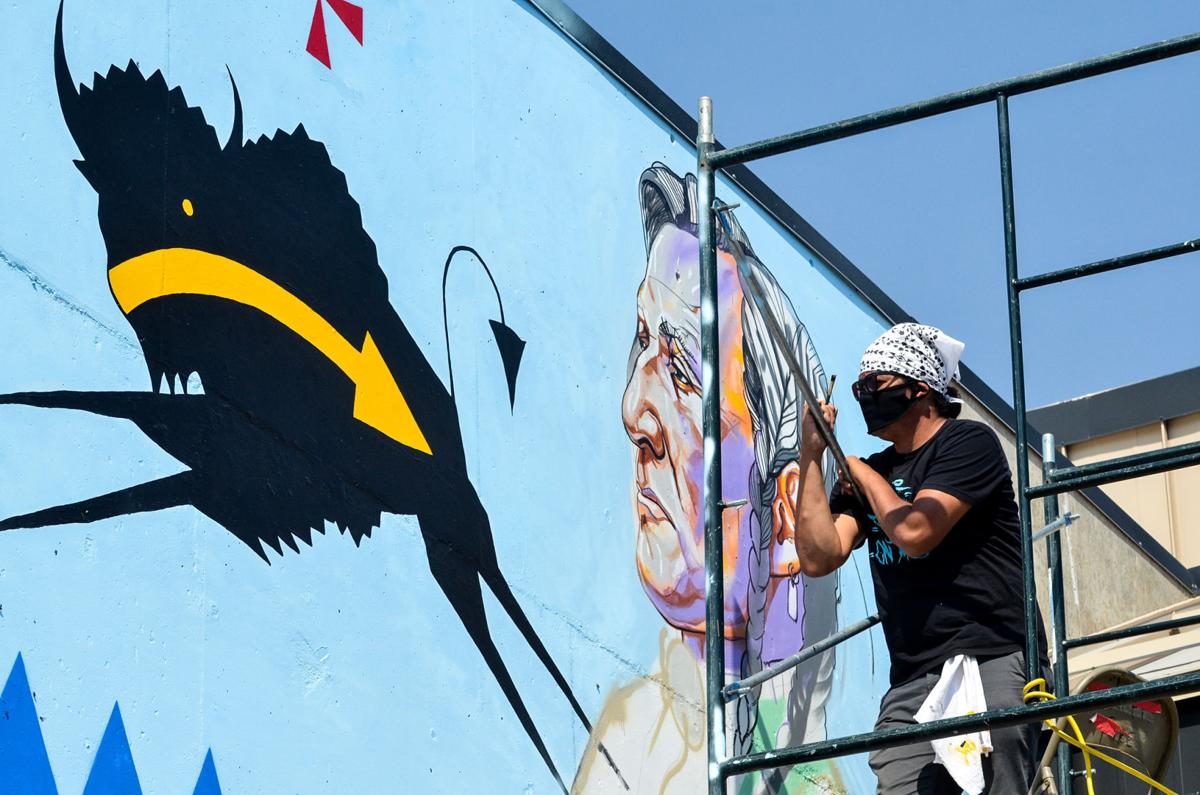 Mural painter Louis Still Smoking checks the color tones on a portrait of Blackfeet ancestral elder Mountain Chief that will be part of a 50-foot mural over the Heart Butte Public School entryway. The stylized buffalo to the left recalls a traditional design on Blackfeet tipis. 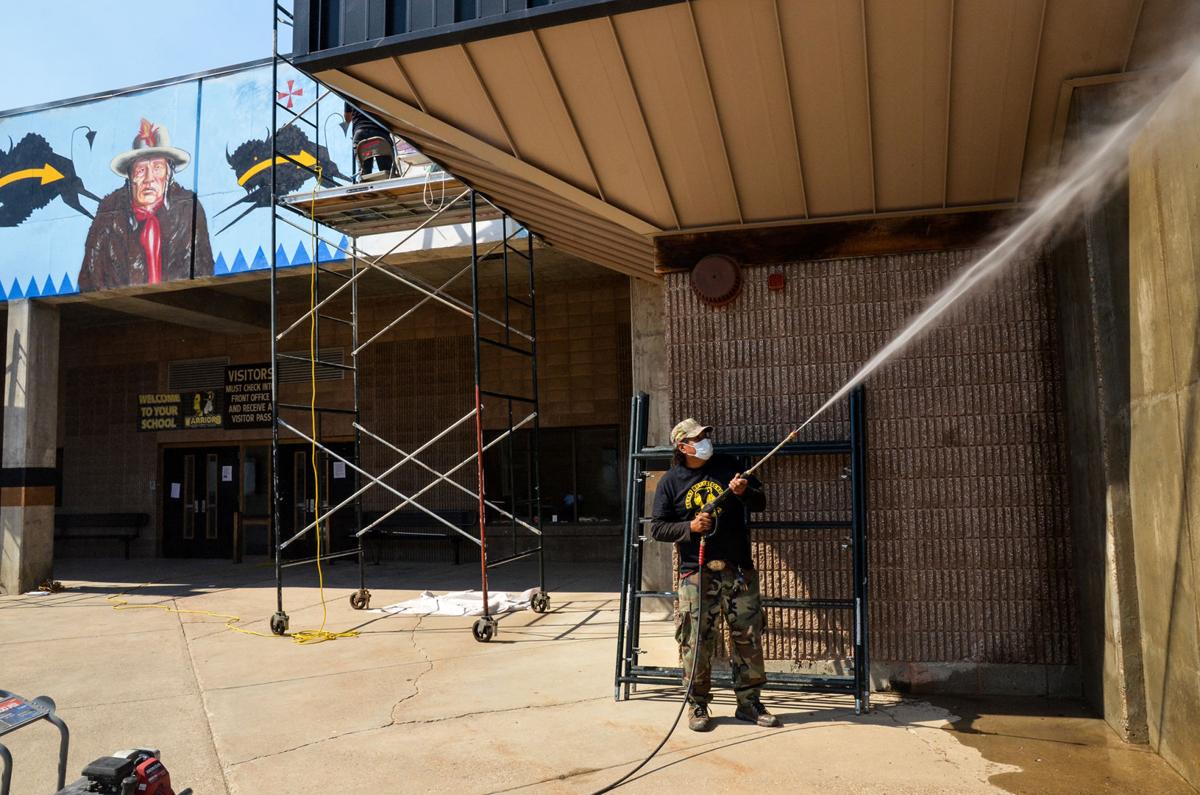 HEART BUTTE – Look casually at the school entrance and you’d swear a quartet of Blackfeet elders was painted on the sky.

The façade above the Heart Butte Public School now features massive portraits of historic personalities along with spiritual symbols of Blackfeet culture, set against a blue backdrop as bright as a summer day on the Rocky Mountain Front. Last week, Louis Still Smoking was high on a scaffold putting shadow details on Mountain Chief, whose ear was as big as Still Smoking’s chest.

“You can’t do this free-hand,” Still Smoking said as he peered at his smartphone in the bright sunlight. A schematic design of the portrait’s color details was on the screen, guiding him where to curve the fold of a giant ear. “You’d have to be some kind of super-genius or something to do that.”

He and partner John Pepion had been working on the 50-foot-wide mural for three weeks, with a goal of finishing this Friday. After the entryway is completed, they plan to add more portraits to a large retaining wall flanking the doors.

“The school wanted four people from the area,” Pepion said of the portrait choices. “These are all from this community."

The portraits include John Spotted Eagle, son of the Spotted Eagle for whom a butte behind the school is named. Arrow Top was a warrior and leader who has a descendant teaching at Heart Butte today, Pepion said. Running Crane also has many descendants living in Heart Butte. And so does Mountain Chief, who anchors the far right side of the mural. In between are traditional buffalo and star symbols reflecting the designs painted on Blackfeet tipis.

“We all have ties,” Pepion said. “I myself went here for seventh and eighth grade. Now, when the kids come in, they can look up and say ‘that’s one of our ancestors.’”

It will be a while before many of those kids see the work. Pandemic restrictions have most of the community homebound, as the Blackfeet Indian Reservation has closed its borders to all non-essential visitation and activity. About 30 staff members of the school district were present at the building on the first week of school, but all their students were at home participating through digital connections.

Paradoxically, that’s helped the painting project. Still Smoking and Pepion were both thankful they didn’t have regular floods of inbound and outbound students passing under their 15-foot-high scaffolds as they worked.

Pepion said he was hunting up good art videos and putting together take-home packets of projects for art class students to work with for the first half of the year. He hopes to have his full teaching certification by spring semester. By then, he also hoped to no longer be teaching art “Bob Ross-style” referring to the long-running TV painting show personality.

“I’ve been an artist all my life,” Pepion said. “But I never thought I’d come back here and do something like this. It’s about time the community was investing in art.”

HEART BUTTE — No snow stuck to the basketball court where Sullavin Wells and Lalontae Nomee shot some hoops on Wednesday afternoon. The Blizza…

By comparison, 10 Montana counties have had fewer cumulative cases since the onset of the pandemic six months ago.

The COVID-19 pandemic presented stark choices to people on the Blackfeet Indian Reservation: Protect the economy or protect the culture?

Mural painter Louis Still Smoking checks the color tones on a portrait of Blackfeet ancestral elder Mountain Chief that will be part of a 50-foot mural over the Heart Butte Public School entryway. The stylized buffalo to the left recalls a traditional design on Blackfeet tipis.