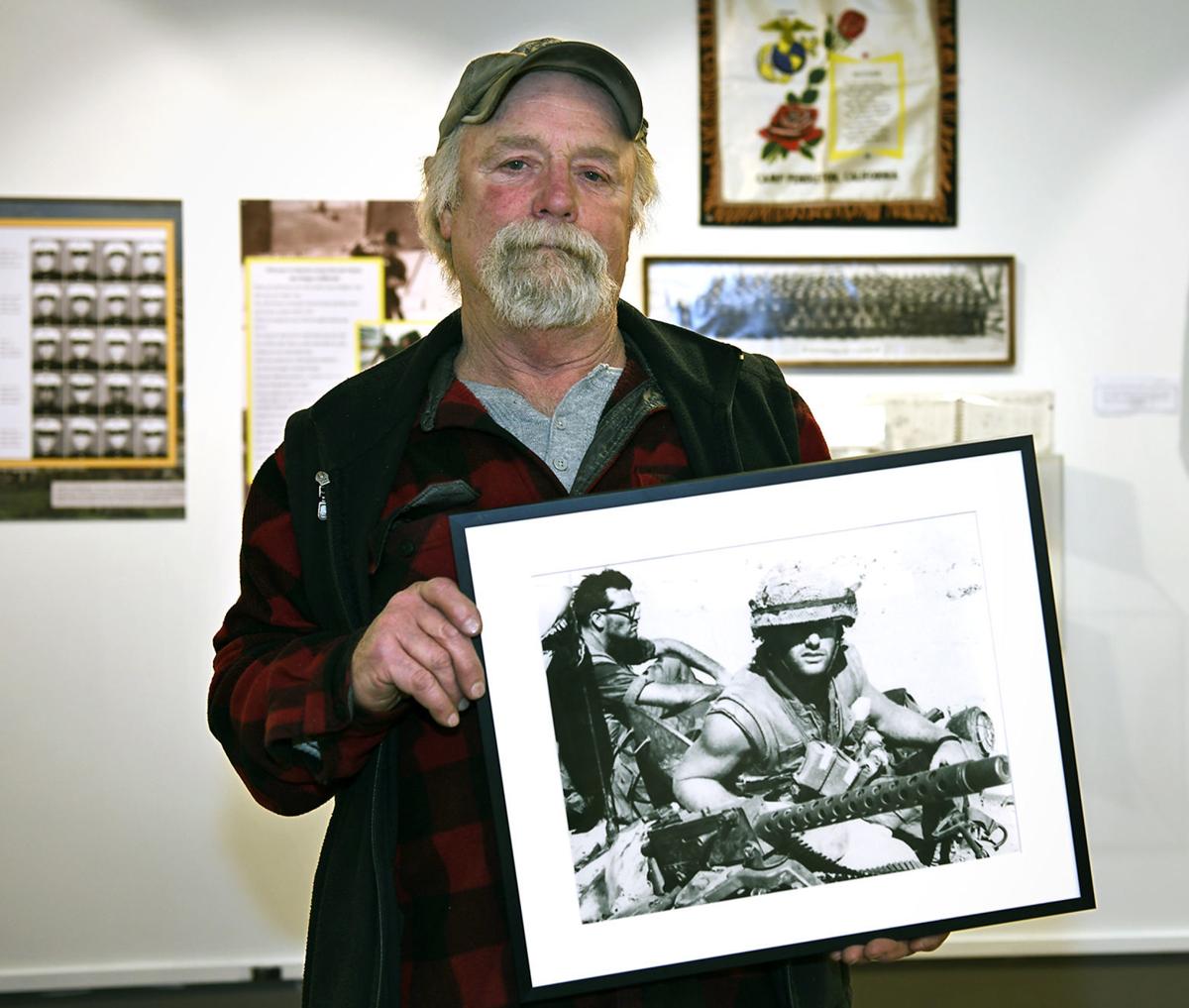 Leon Howard holds a photograph of himself when he was a Marine Corps scout in Vietnam in 1966-67 at the Historical Museum at Fort Missoula. An exhibit of Howard's own photographs, artifacts and other items from the war is a highly personal window into the lives of those who fought there. 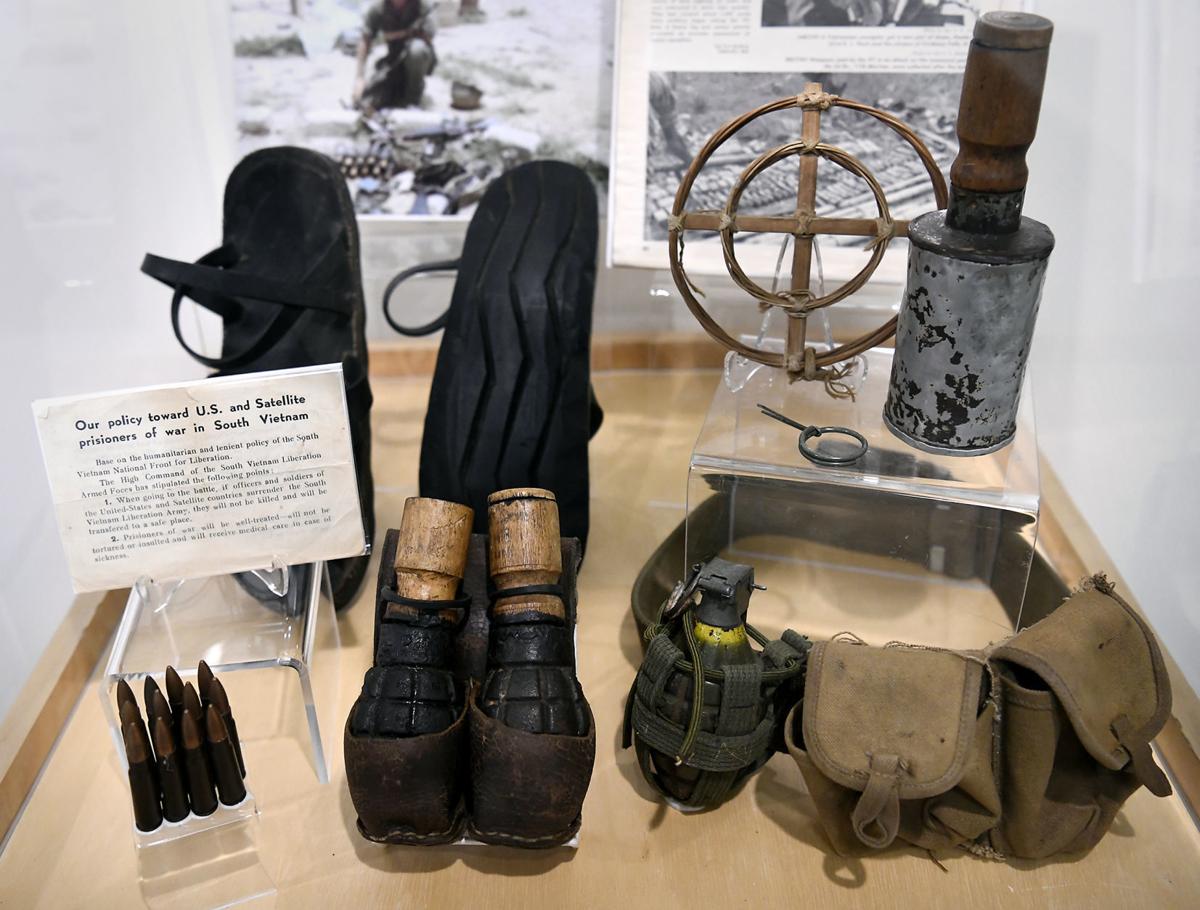 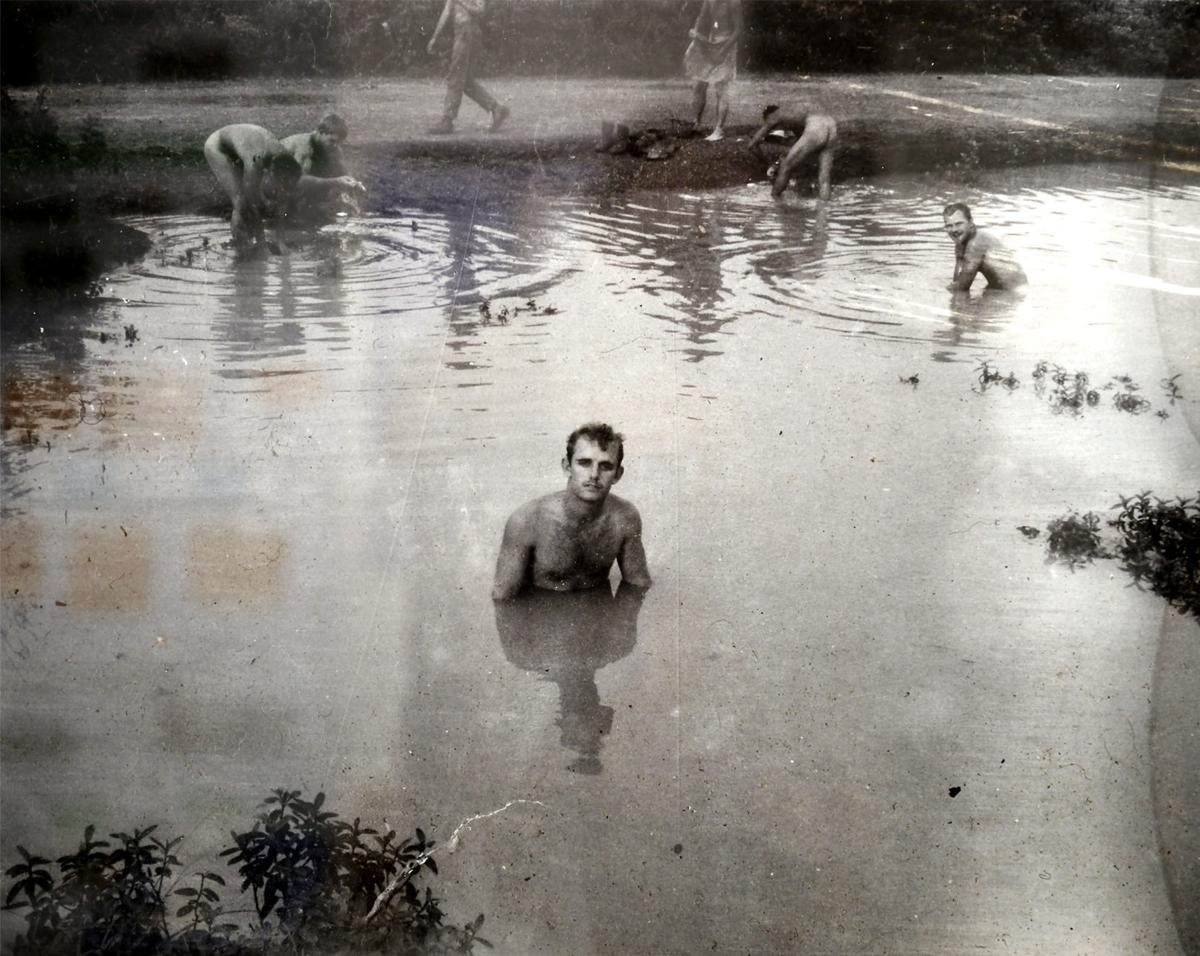 A fellow Marine used Howard's camera to take this photograph of him and others bathing in a pond barely a mile from the Demilitarized Zone in Vietnam in 1966. "Any time you got around water like that, when you haven’t had anything for weeks, or maybe a month, you took advantage of it to keep ourselves clean, somewhat," Howard said. 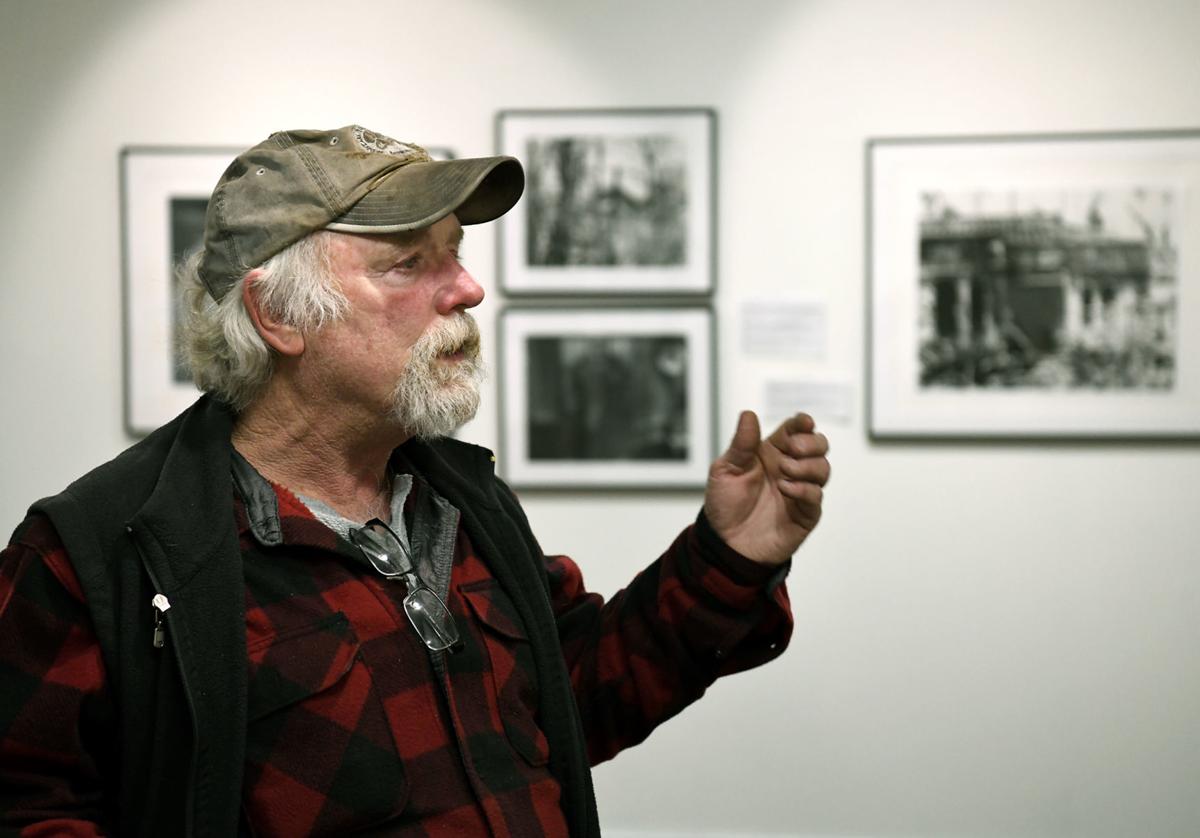 Howard's 13-month stint in Vietnam in 1966 and 1967 left him with post-traumatic stress disorder. He still chokes up when recounting some of his war experiences.

Vietnam lies over the ocean, but it’s close at hand for Leon Howard.

More than 50 years after a 13-month stint in Vietnam as a Marine Corps scout ended, Howard, like many who fought in the unpopular war, suffers from post-traumatic stress disorder, or PTSD.

Unlike most, if not the rest, the 73-year-old Frenchtown man has teamed with a professional curator at the Historical Museum at Fort Missoula to reach into his box of memories and turn a deeply personal collection of photos and artifacts into a stunning exhibit.

Opening Saturday and continuing through July 2020, “No Enemy Movement Observed: The Vietnam War Through the Eyes of a Frenchtown Marine” will occupy the Heath Gallery.

“At first I thought maybe a small display. We have another smallish gallery on the north end,” curator Ted Hughes said. “Once I started delving into his photographs and artifacts, I realized it’s too big for that. This is our biggest gallery and it’s even too big for it.”

It’s a powerful presentation, unlike anything the museum has done before.

As a 21-year-old attached to the 3rd Battalion, 7th Marine Regiment, Howard was charged as soon as he landed in DaNang in the summer of 1966 with doing something for which he’d not been prepared. He became a scout who spent much of his time in country near and behind enemy lines, usually in a squad of four or five men. Howard’s duties included ever dangerous reconnaissance missions, guiding artillery barrages and bomb drops and prisoner interrogations. And surviving.

Day after day, month after month, he saw the worst of a war gone bad.

“I was in the S2, which is battalion-level intelligence,” he said. “Boy, we were smart in those days, right?”

He bought a Canon 35mm camera in South Vietnam and sold it before he left. But many of the snapshots Howard brought back proved works of art. Out of some 180 prints, Hughes had 45 of them skillfully enlarged and cropped by Marcy James of Paper and Ink Studios of Missoula.

Framed, they provide candid views of the South Vietnamese people in villages and rice fields, of Howard and his fellow Marines bathing in a pond within shouting distance of the Demilitarized Zone, of landscape views of the countryside, and of the interior of an abandoned Buddhist temple.

Hughes has mixed in artifacts such as Howard’s fatigues, medals and scouting logs. One display encases a collection of Viet Cong grenades, sandals made from truck tires, AK-47 bullets and punji sticks used for booby traps.

Howard chuckles his way through some stories, chokes up through others but doesn’t shy away from the painful ones.

He found his way to Montana after the war, and spent years in the woods as a timber faller. He and Janet raised their family west of Missoula, for a time in the mountains in a home with no running water, then later in the Houle Creek area near Frenchtown, where they still live.

Howard can kid about his size — 5-foot-6 now, down from 5-7 1/4 — but in the next breath assert earnestly, “It probably saved my life, to be honest with you. With as many rounds as I got shot over me, I could have just picked one up right through the head.”

There is something both disturbing and titillating about the exhibit Hughes put together.

Howard pointed to a framed photo of two men, one of them Capt. Larry Celmer, leader of his scout crew.

“He made the mistake of getting behind a machine gun. It was a real big mistake for him, because machine guns, they draw a lot of fire. And he took one,” Howard said of Celmer's death in March 1967 in Quang Ngai Province. “I went and saw his name on the (Vietnam Memorial) Wall. He was a good man. He was young, too. Look how young they are.”

His account of one mission out of a Marine air base in Chu Lai gives a glimpse of the exasperation American soldiers felt in battling the Viet Cong and Communist North Vietnamese.

The Marines would go out in the morning and push the enemy out of an area, only to have them return when they went back to base.

“We’d push ‘em out the next day and then they’d come back in,” Howard said. “You’d lose a guy here, lose a guy there. Every day. They made everything seem so meaningless.

“Guys would be going berserk and losing it, and it was the sense of losing. Losing friends. It seemed so senseless.”

He saw and participated in things that seem horrific now. He was spotting for a pair of snipers above a village, who had their rifles trained on five people who were "like ducks right over there on the hillside."

A girl was at the end of the column, "talking to either her husband or her boyfriend," Howard said.

He watched as the younger of the two snipers gleefully took her out.

“I’m looking through these binoculars, and I just saw her go up. He shot her right between the shoulder blades,” Howard said.

The two riflemen then dispatched the four enemy soldiers she was with. As the young sniper scooted around to get a better shot, “all of a sudden it’s like somebody threw up a handful of talcum powder,” Howard recalled. “He’d set off a z10 mine, but the only thing that went was the fuse. It didn’t get down to the blasting cap to set off the TNT.”

It’s impossible all these years later and miles away to imagine the emotions that such a sequence of events would set off.

“Cold-hearted,” he said, choking on his words. “That's just it. Everything is lost. It’s like dying. You don’t care anymore.

“It’s like this book I was reading. Every time I would shoot and kill one ... it’s like a little bit of myself dying.”

Finally it became too much.

It was difficult for Howard to put his end in Vietnam into words, but he tried gamely.

“I was close to the berserk stage,” he said. “I was interrogating a prisoner who was an old man, like me now. Probably less than a hundred pounds, and I just started beating him up. I threw him down to the lower part of the bunker where it was full of water. I said, 'We’ll just throw him in the river tonight. If he dies ... ' And I left.

“What kind of mentality is that?” Howard asked. “And they relieved me of duty is what it amounted to.”

The Purple Heart in a case on the west wall of the gallery is for the mental scars he sustained.

His return home was a quiet one.

“Nobody understood back here. How could you communicate and tell them what you’d been through when they don’t have anything to draw from?” Howard said. “They don’t know. They just don’t know.”

His younger brother Don was living in Montana, and after wandering around the country and taking a few classes at Humboldt State University in California, Leon headed north to join him. He said no one in Missoula was hiring Vietnam vets, so the Howards headed for the woods, first in Washington and Idaho and eventually finding work in Montana as well. He retired from timber falling at 61.

Hughes has dubbed the cubicle in the center of the Heath Gallery the PTSD Room. It includes paintings from World War I by German expressionist artist Otto Dix and poems by John Musgrave, a Marine who was in Vietnam at the same time Howard was.

Hughes highlighted the writings of Siegfried Sassoon, a decorated British soldier whose protest against World War I in 1917 earned him a trip to a military psychiatric hospital. Sassoon's “fictionalized autobiographies” about the mental ravages and destruction of character in war were compiled under the title of “The Memoirs of George Sherston.”

Hughes chose an excerpt that fits well with the Howard collection:

“Not then was their evil hour, but now; now, in the sweating suffocation of nightmare, in paralysis of limbs, in the stammering of dislocated speech. Worst of all in the disintegration of those qualities through which they had been so gallant and selfless and uncompromising — this, in the finer types of men, was the unspeakable tragedy of shell-shock …”

How many Vietnam veterans can open themselves to such a public display of their “evil hours”?

“I’m hoping there are others," Howard said. "I’m hoping if guys have things from that time that they can bring them in and can show them. It’s for illuminating people’s minds.”

"No Enemy Movement Observed: The Vietnam War Through the Eyes of a Frenchtown Marine" opens Saturday in the Heath Gallery at the Historical Museum at Fort Missoula, 3400 Captain Rawn Way. Hours are noon to 4 p.m. The exhibit featuring the collection donated by Marine scout Leon Howard will be on display until July 2020.

It was a simple ceremony, made somewhat more grandiose by the presence of two U.S. Senators.

Col. Gary Sorensen’s first memory of Missoula's World War I Doughboy statue is from when he was about 12 years old.

It took 48 years, but Judi Bouchard and America were finally able to give Alan Boyer a proper salute.

A staple exhibit at the Historical Museum at Fort Missoula could probably use some loving care.

Victor Machart put his camera and diary to good use while stationed at Long Binh Base in Vietnam in 1969.

She knows her dad served on Navy ships before and probably during the Vietnam War but can’t prove it in order to get him into the state veterans system.

Leon Howard holds a photograph of himself when he was a Marine Corps scout in Vietnam in 1966-67 at the Historical Museum at Fort Missoula. An exhibit of Howard's own photographs, artifacts and other items from the war is a highly personal window into the lives of those who fought there.

A fellow Marine used Howard's camera to take this photograph of him and others bathing in a pond barely a mile from the Demilitarized Zone in Vietnam in 1966. "Any time you got around water like that, when you haven’t had anything for weeks, or maybe a month, you took advantage of it to keep ourselves clean, somewhat," Howard said.

Howard's 13-month stint in Vietnam in 1966 and 1967 left him with post-traumatic stress disorder. He still chokes up when recounting some of his war experiences.