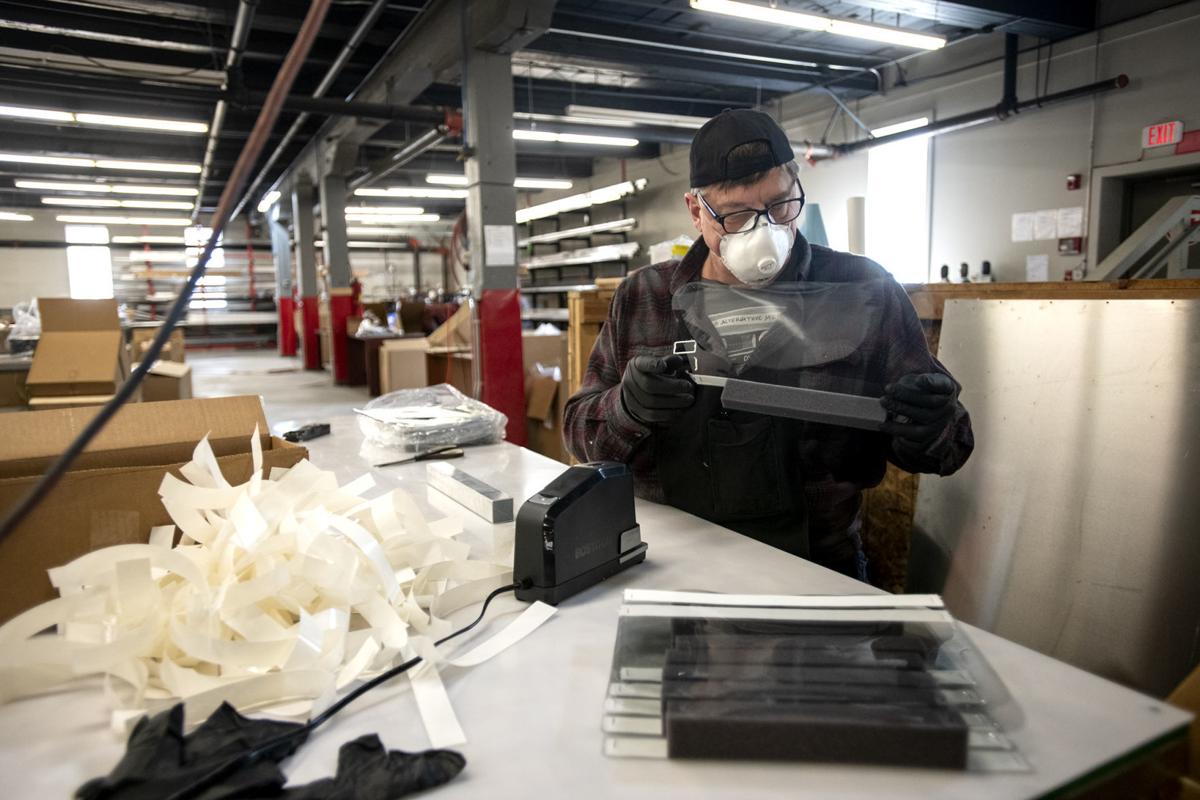 Mark Jimick, an assembler at Coaster Cycles, constructs a face shield at the shop in Bonner on Friday morning. Coaster Cycles was awarded contracts through Providence Medical Group as well as the New York Department of Health to produce 650,000 face shields. 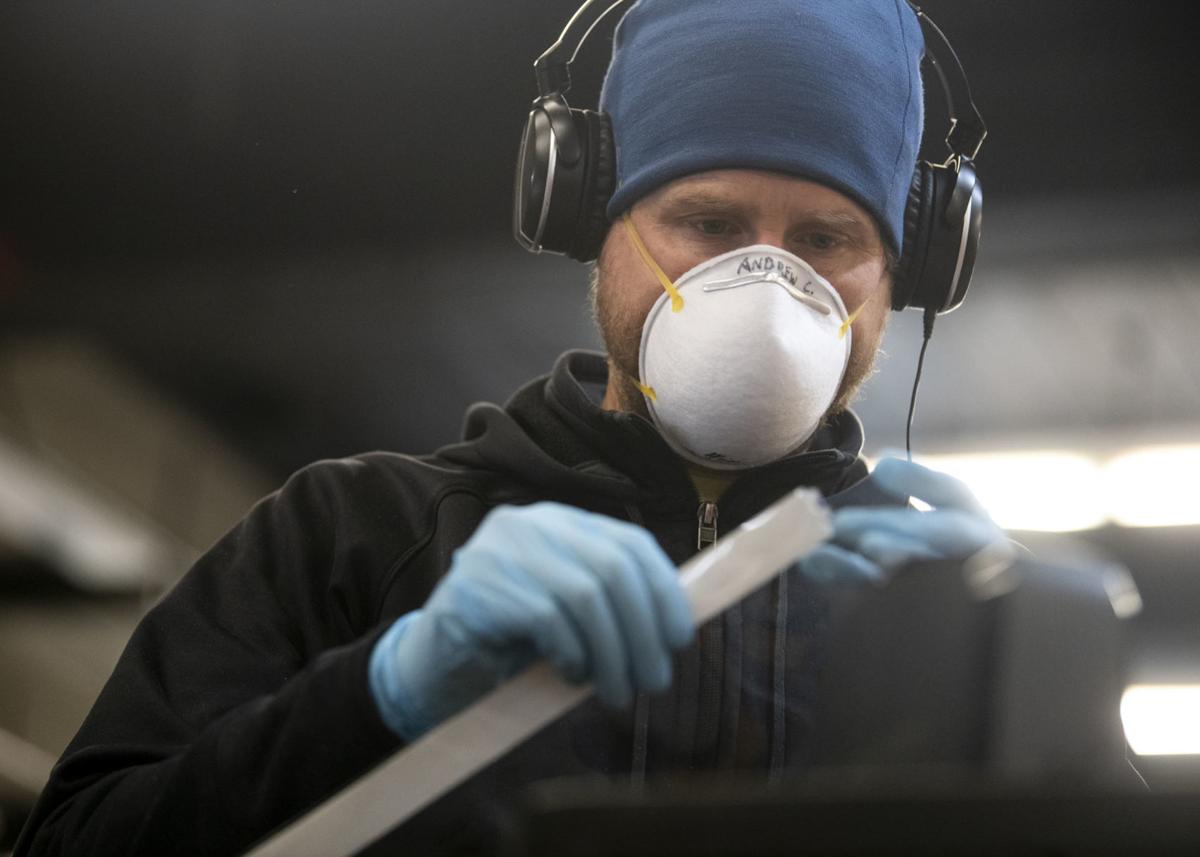 Andrew Connor, a friend and soccer teammate of Coaster Cycles chief operating officer Justin Bruce, wanted to contribute to the endeavor to produce more than half a million face shields for hospitals and medical providers. 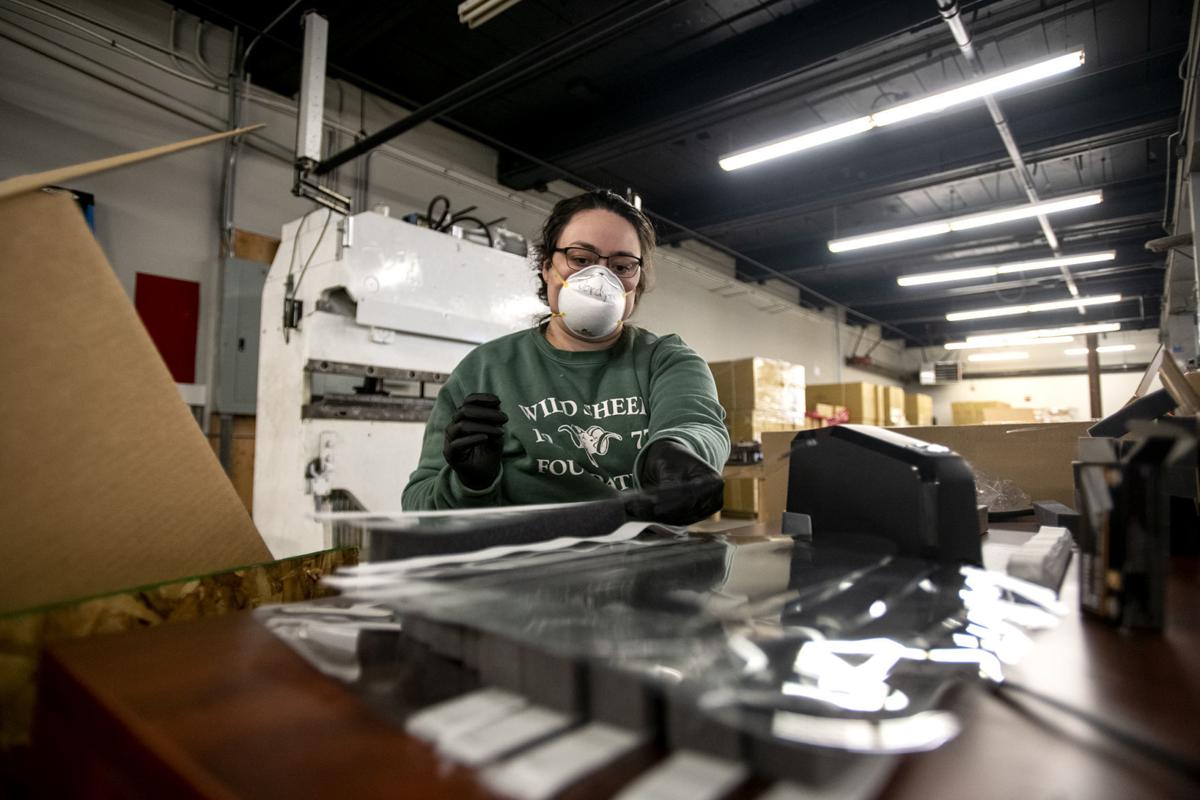 Jordyn Belfourd began her first day of work at Coaster Cycles on Friday after three months of unemployment. Coaster Cycles founder Justin Bruce is hiring workers at $14 per hour, plus bonuses, to assemble hundreds of thousands of plastic face shields for medical workers.

BONNER — An up-and-coming manufacturer faced with a down-and-out market is reinventing itself in the coronavirus crisis, bringing back laid-off workers and hiring more.

Coaster Cycles, maker of three-wheeled cycles that are shipped around the world, is adjusting to a world that suddenly and temporarily doesn’t need the things.

Assembly began Friday in a historic stone building on the Bonner mill site on face shields for health care workers. The first shipment of what will ultimately be 500,000 is set for Tuesday to 51 Providence hospitals in six states, including St. Patrick in Missoula and St. Joseph in Polson.

And last week Justin Bruce, chief operating officer at the Bonner plant since its inception in 2015, received confirmation of an initial order of another 150,000 shields to the New York City Department of Health, to be shipped within 20 days.

“I’ve been getting orders or requests for orders all morning but right now with 650,000 I think we have our hands full,” Bruce said. “We’ve got to make sure we can fulfill these first orders. I’m hoping within five days to be able to take more. That would let us know we’re kind of ahead of schedule.”

Cycle-making equipment and materials were moved aside in the former lumber mill warehouse to create spaces for dozens of pallets of boxes and 21 assembly stations, each at least 6 feet from the next. Supplies enough to make the first roughly 150,000 shields were trucked in last week, and similar amounts will continue coming in each week for the next one to three months.

The initial pallet of 6,000 assembled shields will go out Tuesday with one or two pallets each subsequent day.

The key, Bruce said, will be beefing up a workforce to assemble all of them, sweet words in these times of record unemployment. There were four masked people stapling away on Friday’s shake-out morning, returning Coaster Cycles workers and the captain of Bruce’s soccer team.

Jordan Ross, operations manager, was on the phone interviewing potential applicants. Adam Geib, who for now comprises the entire engineering department, showed a friend who seemed interested around the plant. Bruce said he laid off 13 of Coaster’s 21-person work force and drastically reduced hours for five more when the COVID-19 crisis hit Montana.

“We’re bringing back basically everybody who wants to come back and we’ll end up having two managers doing nonstop interviews,” said Bruce. “We are actively looking for people. We may end up going to a second shift, we may go to Saturdays and Sundays.”

By Monday at least 16 stations should be manned.

Other businesses at the Bonner Industrial Park are reaching out to the employees they’ve laid off to chip in with assembly lines of their own. Geib said his job will turn to coordinating those efforts at neighboring facilities.

“The product itself is very simple, but we do have to maintain the same kind of standards that we have with the normal bikes we sell,” Geib said.

Founded in 2005 by Ben Morris, now CEO living in the San Francisco area, Coaster Cycles is now four U.S. companies under the umbrella of Coaster Pedicabs. There are branches on both coasts, in Texas and the production plant Montana. The other three handle advertising, experiential marketing and brand sampling of pedal-powered vehicles.

“With four revenue streams, one usually feeds the other,” Bruce said.

But they all came to a screeching halt in mid-March when the pandemic raised its ugly head, just as Bruce and his managers were gearing up to expand operations with orders from the likes of Amazon, UPS and Starbucks.

"It was the most challenging, most difficult work week Ben and I have ever had,” Bruce said. “We faced this incredibly difficult decision.”

It’s one that countless businesses have been forced to make in the past month. Do they keep workers on until the cash flow dries up, or furlough and lay off until times get better?

The latter was the only practical choice, Bruce said, though he and Morris “were so uncomfortable with it we couldn’t really sleep at night.”

They went to work looking for a way back into the COVID-shackled market.

“We knew there was something out there that we could do to help and we were basically desperate to go find it,” said Bruce.

Morris found it in the late afternoon of the last Friday of March. It was an “open source” design for the kind of face shields hard-hit medical facilities across the U.S. are seeking.

“We’ve heard 45 million were needed in New York alone. We’ve heard all sorts of numbers but it’s well into the multi-millions. And there’s a lot going on with FEMA,” Bruce said.

A long night followed by a long weekend ultimately netted the Providence contract for the 500,000 shields. Then came the rush to set up supply and warehouse logistics.

“When I was made aware of it I thought, ‘I really hope this works out,’” said Joyce Dombrouski, chief executive for Providence Health and Services Montana. “It’s a need we have, and it would be great to have it from a local business.”

The shields, she said, provide “an additional level of protection that we encourage if not quite frankly require employees to have.”

Worn over surgical or N-95 masks, the shields have become coveted in recent weeks by health care providers because of their simplicity and their penchant for extending the lives of masks.

The shields can be assembled in less than a minute (Bruce is counting on a pace of one every 35 to 45 seconds). A piece of foam 9 inches long is attached by adhesive to a 13-inch piece of plastic, die-cut to Coaster’s specifications. The apparatus is then stapled on either side to an elastic band.

“We’re thinking that potentially about 720 can be made by a person in an eight-hour day,” Bruce said.

He’s offering assemblers $14 an hour, with production bonuses of $5 or $6 beyond that. Bruce and his managers were using Friday’s shake-out day to settle on the bonus scale.

At midday, he looked over the sparse operation and pronounced himself satisfied.

“We’ll definitely get there. We will absolutely hit every one of our demands. I just don’t know if I’ll be here all night long every night. That’s why we’re postponing (further orders) until we get a much bigger crew in. I think we produce a lot more and help a lot more hospitals out.”

Ross and Geib have been invaluable in getting the sudden change of pace off the ground.

“It’s possible because of those two guys,” Bruce said. “They’ve been here for three weeks. As soon as I said we’re going to do this, they were here doing the engineering and prepping the space and managing teams and starting with interviews … just helping me out with everything so I could work with the vendors.”

“We had a lot of buy-in with the core staff, and some of that’s just the nature of Coaster,” Geib said. “We rolled up our sleeves and went to work. It has been a pretty Herculean task to get where we’re at, but it’s been pretty rewarding.”

The face shields are of special significance to the managers.

Geib’s girlfriend is a nurse at Community Medical Center. She was planning to drop by Friday afternoon to volunteer her time at the assembly stations. Ross’s wife, Dr. Meredith Ross, is an endocrinologist at St. Patrick Hospital who could very well be using a Coaster-made shield.

“We normally don’t have the ability to help out on the front lines in a situation like this,” he said. “It’s kind of a call to duty, so to speak, to be able to do that. It’s nice to be part of the effort.”

The cycle orders initially dried up but have begun trickling back in.

Bruce said he tells those clients they’ll have to wait 30 days, when he hopes to open one of the three lines of cycles back up. Starbucks, Coaster Cycles’ biggest client, is based in Seattle, just as the Providence hospital group is.

“There’s a risk we could lose a couple sales, but I think we’re doing the right thing.”

To apply to help make face shields at Coaster Cycle in Bonner go to jobs@coastercycles.com. To learn more about the job, search “Coaster Cycle Jobs” online.

Her Highness is back: Osprey matriarch returns to Lolo nest

From her perch near the nest where she’s laid her eggs for most of the last 11 years, “Her Highness Harriet” had no idea of the turmoil into which the human world has been plunged by a tiny virus.

Preston Rossbach was charged April 2 with one count of felony tampering with witnesses or informants after allegedly smearing threatening messages in a holding cell where other inmates testifying against him were held during his trial.

OVANDO — At a small school in rural western Montana, Mandela van Eeden stood at the front of a classroom, pointing to Australia on a large wor…

Alison Stigora used to have to burn her own wood for sculptures. As an artist in Pennsylvania, there weren’t wildfires to create naturally cha…

The city of Missoula's street department is shuffling its construction projects to take advantage of lighter traffic during the COVID-19 shutdowns.

A local construction company has taken up outfitting the Missoula County Sheriff's Office with face masks as calls for service continue on during the coronavirus pandemic.

Mark Jimick, an assembler at Coaster Cycles, constructs a face shield at the shop in Bonner on Friday morning. Coaster Cycles was awarded contracts through Providence Medical Group as well as the New York Department of Health to produce 650,000 face shields.

Andrew Connor, a friend and soccer teammate of Coaster Cycles chief operating officer Justin Bruce, wanted to contribute to the endeavor to produce more than half a million face shields for hospitals and medical providers.

Jordyn Belfourd began her first day of work at Coaster Cycles on Friday after three months of unemployment. Coaster Cycles founder Justin Bruce is hiring workers at $14 per hour, plus bonuses, to assemble hundreds of thousands of plastic face shields for medical workers.