Two state agencies are squaring off over the release of investigative reports that say health department employees have not followed the proper policies and procedures when trying to protect children from alleged neglect and abuse — sometimes to the detriment of the child and family.

In its five years of existence, the ombudsman’s office has shared 42 "Findings Reports" with the Department of Public Health and Human Services outlining problems that include Child and Family Service Division employees:

• Misleading court officials who in one case removed a child from the mother’s care and released the child to the father, who relapsed his substance abuse while the child was in his care. Meanwhile, the mother was given "arbitrary and unreasonable expectations" of steps needed to regain custody.

• Punishing a mother by reducing visiting time despite a court order to the contrary, with the employee “indicat(ing) joy at reducing the mother’s visits.”

• Placing a child in a stranger’s care, even though multiple family members were available.

• Placing four children with their noncustodial father after an unexplained injury to the youngest child. At the time, the father was suspended from his job due to allegations of sexual assault. The Child and Family Service Division didn’t investigate that allegation or follow up on it.

In May, the Montana Department of Justice told the Missoulian that the “Findings Reports” created by its Division of Criminal Investigation’s ombudsman’s office, would be posted on its website once identifying information was removed. The Findings Reports are responses to concerns from the public about the handling of cases by the Department of Health and Human Services (DPHHS).

Jon Ebelt, a spokesperson for DPHHS, countered that his department believes the Findings Reports are confidential. The two state agencies plan to seek clarity from a judge.

“We are going to petition district court in Helena for a declaratory judgment on the matter,” said John Barnes, a spokesperson for DOJ. “We will give the court a sampling of the reports for review and make our case why they are public.”

Ebelt said they’re asking for guidance on two statutes. One governs confidentiality of Child and Family Service case records and one subjects the ombudsman to confidentiality and disclosure restrictions.

Mike Meloy, a veteran Freedom of Information Act attorney in Helena, looked at the statutes Ebelt referenced and said he doesn’t see any reason for not releasing redacted Findings Reports.

“The statute permits disclosure so long as the child’s name does not appear and the document concerns the manner in which the program is administered,” Meloy wrote in an email to the Missoulian. “Moreover, there is nothing in the reports that would qualify as matters of individual privacy to trigger a constitutional exception to the right of access.”

Denise Johnson is a member of the Montana Child Protection Alliance, a nonprofit formed to raise awareness of children't rights and advocate for due process under Montana law. She said in the past year they've "heard from literally hundreds of families" who feel they have been treated unfairly by Child Protective Services, and release of the reports will create more accountability within the system.

"The state is saying 'We are doing it right,' but there's no accountability and all of these ombudsman reports verify that," Johnson told the Missoulian. "Their overreach … doesn't happen in every case, but it does in enough cases that it's alarming, especially when we rank second in the nation, per capita, of children in foster homes. We remove children at three times the national rate. We hear a lot about drugs, but we're no worse than our neighboring states."

Ombudsman Traci Shinabarger, author of many of the Findings Reports, said they’re not meant to be punitive, but are learning documents for the public, legislators, and even DPHHS administrators and employees that outline problems that need fixing.

“We write them because we know they will be shared with the (person who made the complaint) and they will share them with others,” Shinabarger said. “We believe that redacted, published reports give folks access that they wouldn’t have otherwise, and because we found a problem it will help other people figure out what we are doing.

“We know some things could be fixed. We’re not releasing them to punish DPHHS; that’s not the ombudsman’s job. If they can’t fix it themselves, maybe the courts, laws, or someone can. But we somehow need to get over it and find some way to fix this.”

The Missoulian obtained about half a dozen Findings Reports from parents or family members who requested investigations by the ombudsman office, which was created in 2014 as part of the Department of Justice.

Conclusions in those reports included DPHHS not following its own policies and procedures; a lack of documentation of reasons for actions taken by caseworkers; and actions or inaction by the state that put children at risk.

Keep in mind that the National Center on Substance Abuse and Child Welfare asserts that, given no other safety concerns, “a positive drug test or series of positive drug tests should not be used as the sole determining factor in the removal of a child from the home or to determine parental visitation.”

Experts also note that “Contact between a child and the child’s biological family is the single most important factor related to whether the child remains in out-of-home care,” Supreme Court Justice Ingrid Gustafson wrote in a May 2019 decision involving a Yellowstone County case in which a child was taken from her mother. 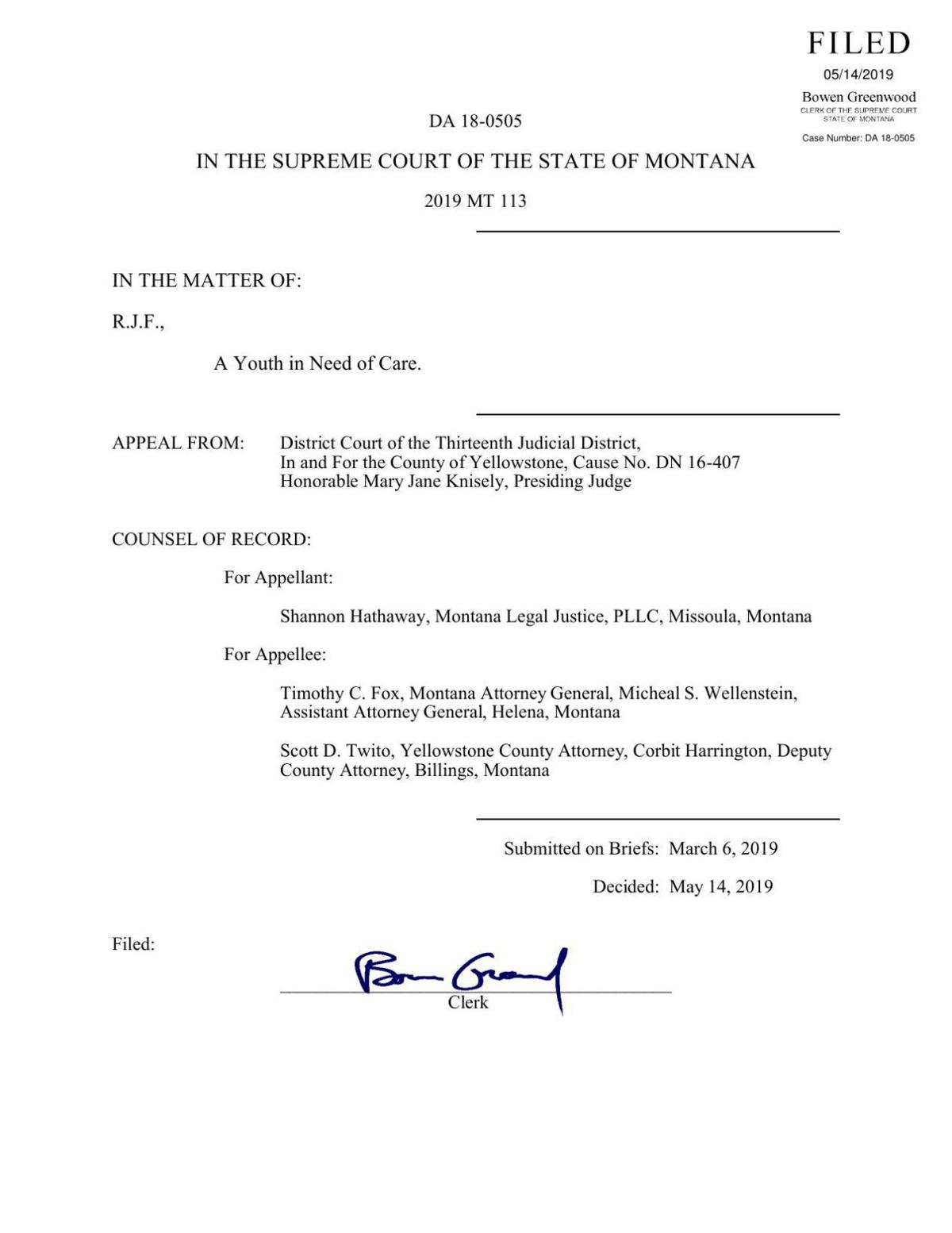 In that case, the court unanimously ruled that Child Protective Services in Montana failed to place a child as close as possible to the mother’s home and failed to help her create a realistic treatment plan for her drug addiction that would help her build a bond with her child.

DPHHS policy calls for first considering a child’s extended family whenever a child is placed in out-of-home care. Under state law, the department “shall make reasonable efforts to prevent the necessity of removal of a child from the child’s home and to reunify families that have been separated by the state.”

One case outlined in a Findings Report involved a methamphetamine-addicted woman who gave birth at a Montana hospital. She left the hospital while the child, who also tested positive for drugs, was in the intensive care unit for a few days being treated for pneumonia and drug withdrawal.

“The entire situation from the moment the Birth Mother was dropped off at the hospital to have Child #1 appears to be a mass of contradiction and policy and procedure violations,” Gala Goodwin, a licensed clinical social worker in the ombudsman’s office, wrote in one Findings Report.

In this case, the Child Protective Services social worker failed to conduct a “diligent” search for other family members, including the birth father or a sibling the worker knew existed. Instead, despite never having met or interviewing the birth mother or father, the social worker relinquished the infant to prospective adoptive parents, who then took the child out of state.

“This has resulted in the presumptive father not knowing or having his daughter, the brother not having or knowing his sister, the grandparents not having or knowing their grandchild, all resulting in a tremendous amount of litigation, anger, frustration and fear that their child is lost to their biological family.”

Shinabarger said one reason could be budget cuts that led to overwhelming caseloads for the Child and Family Services Division.

DPHHS, which is Montana’s largest state agency, had $110 million in funding cut during the 2017 Legislature's regular and special sessions due to the state budget crisis, according to a report from the nonprofit Montana Budget and Policy Center. The report adds that amount doesn’t include the loss of matching federal funds.

Those cuts led in part to high turnover and increasingly large social work caseloads that lead to caseworker “passion fatigue” and associated trauma. The Daily Interlake reported earlier this year that the Billings staff averaged caseloads of 60 children per caseworker, where the Child and Welfare League of America recommends 12 to 15 children per worker.

Currently, the state is advertising for 30 child protection specialist positions across Montana.

“We can see that decisions could be made differently if the staff had more support,” Shinabarger said.

That lack of support is leading to troubling trends, Shinabarger said, including:

• Drifting from a "family-function assessment" to an "incident-based assessment." “We know if you just look at the incident you may miss something. They’re not looking at collateral contacts,” she said. “If mom says she has 10 sisters and you only call nine, it might change the outcome if you make one more phone call.”

• Not completing searches for family members within 30 days of a child being removed from home. Her office is finding children placed in foster homes, but a family member who could take them isn’t found until after a parent’s rights are terminated within a 15-month window. The child may have already bonded with the foster family who would like to adopt, but isn’t allowed to, causing additional harm.

• Not following the recommended policy of allowing supervised reunification with the parent and the child at least twice a week for two hours. The caseworker may not have the time to be there, and also not have the time to find other community resources that could provide supervision. “Visitation is for the child,” Shinabarger said. “If a worker cancels a visit for a parent because they think that parent smells like marijuana, that’s against the best practices. That may be the way the child knows the parent.”

• Not answering simple process questions during the parent’s time of crisis. Shinabarger said more field staffers need to be able to communicate to parents on basic legal issues like explaining the purpose of certain court hearings.

Since her office’s inception in 2014, Shinabarger has been contacted by concerned citizens 1,079 times. That year, she wrote four Findings Report, two the following year and three in 2016. By 2017, she had an additional ombudsman, and 18 Findings Reports were created. Last year, they wrote 15 reports.

Each year, they continue to have open cases from previous years, but also closed or had no further contact in 248 cases; successfully mediated 111; and referred and closed 266. They declined to intervene in 33 cases.

Shinabarger said as more people learn about the ombudsman office, the number of contacts she’s getting increases. Right now it averages about eight a week, as the caseload grew from 83 contacts in 2014 to 317 in 2018.

“We help people every day. We build hope, faith in the system. It isn’t mystical hope. We help people know that this is the way we can go and this is how you can get there,” she said. “That’s not reflected in the reports. It’s difficult to describe what happens when we work with people and communicate with the department. So many things get fixed.”

"Our biggest concern is the lack of accountability to policy and procedures, and the breach of power," she said. "It isn't all of the case workers, but there is enough that we're hearing from people across the state. We are really concerned."

Peruse the Findings Reports provided to the Missoulian.

Findings No face to face

I am writing to express my deep disappointment with the ineffectiveness and, at times, sheer incompetence of Montana Child Protective Services.