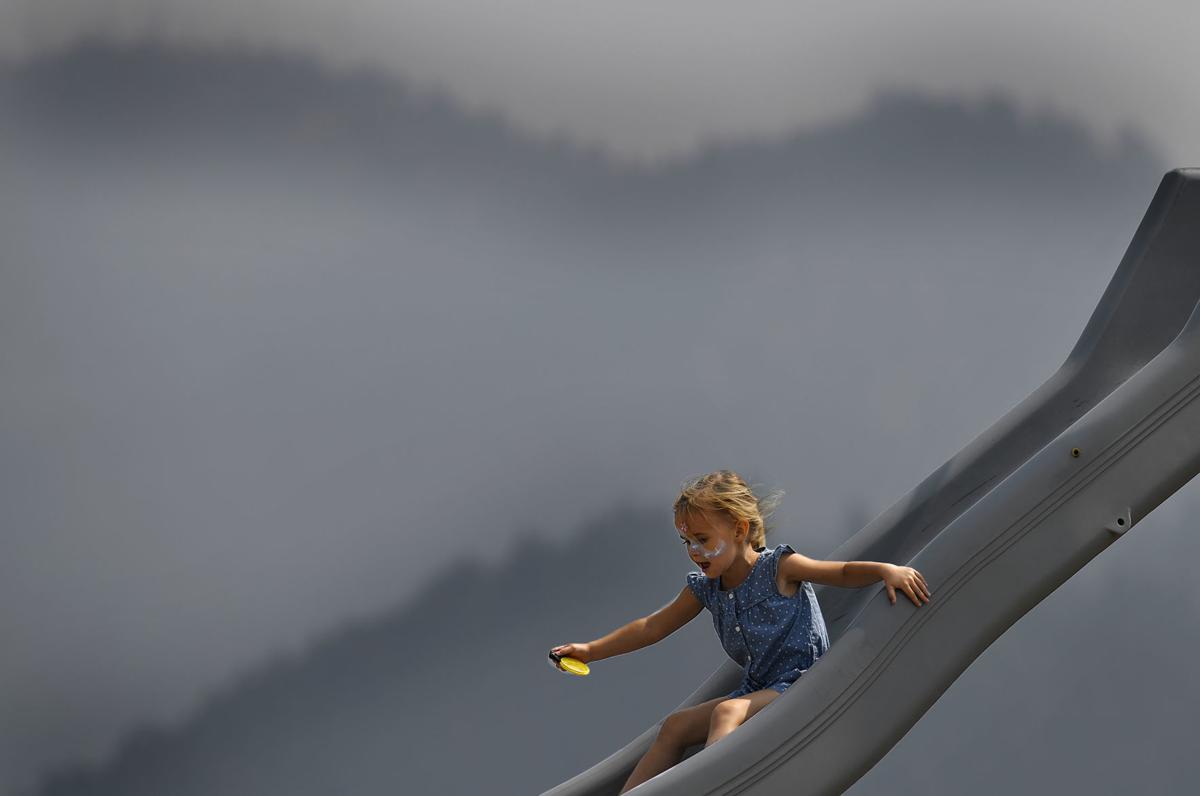 Nora Dalbey, 4, slips down a slide outside of Chief Charlo Elementary School in Missula as the smoke covered mountains loom in the background on Sunday afternoon. The Montana Department of Environmental Quality issued an air quality alert for all 56 Montana counties on Sunday morning. 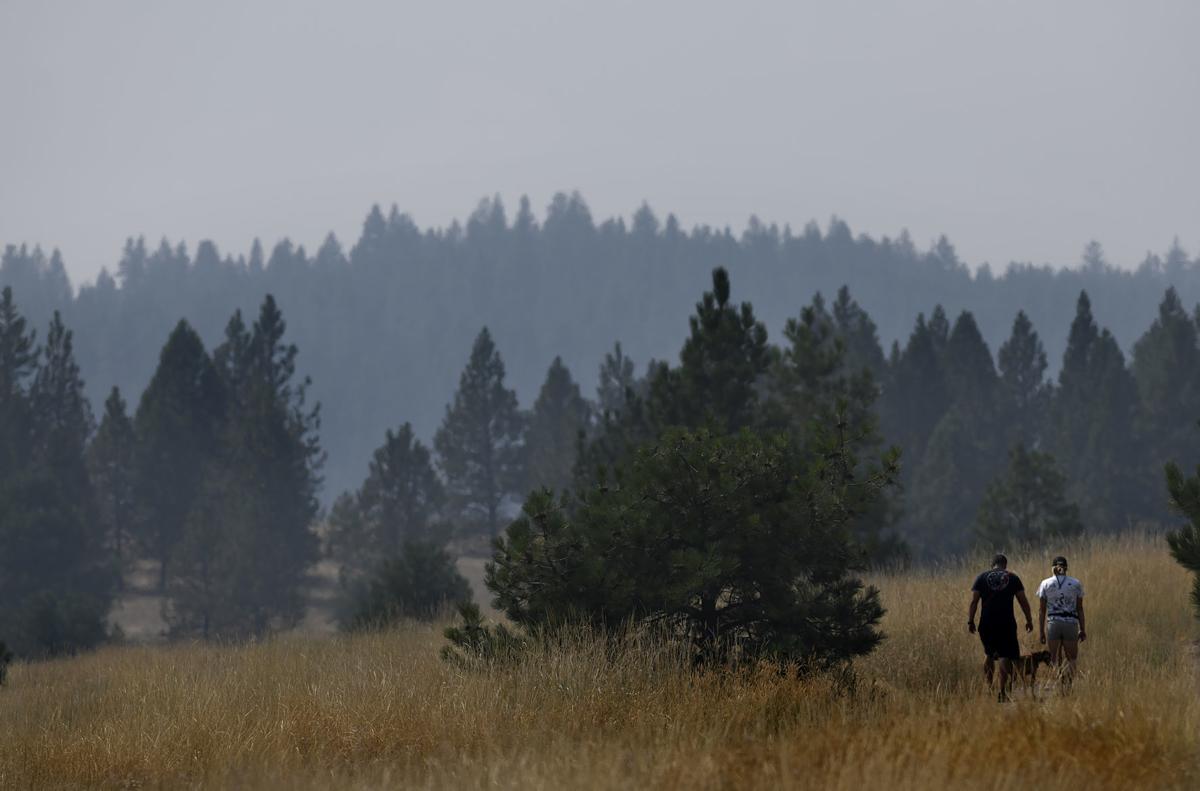 Hikers stroll into the smoke at the Blue Mountain trail head on Sunday afternoon. Particulate levels were ranging between unhealthy and very unhealthy for sensitive groups all across Montana.

MADELINE BROOM for the Missoulian

The Montana Department of Environmental Quality issued an air quality alert on Sunday for every county in the state because of high levels of smoke from wildfires in northwest Montana, Washington, British Columbia and Idaho effective until 8 a.m. Monday.

Air quality staff at the DEQ can't recall a time when all 56 Montana counties have been impacted by smoke at the same time.

Although Sunday’s conditions might have some Missoulians reflecting on last year’s smoke that hung around for weeks, Luke Robinson, a meteorologist with the Missoula office of the National Weather Service said this should be the worst for the rest of the summer, barring more intense wildfires.

A cold front moving east brought smoke from British Columbia through Missoula on Sunday morning, Robinson said. Luckily, he said the forecast showed the smoke could move out as early as Sunday afternoon with winds blowing some of the smoke out of the valley.

Without more smoke in the forecast, air quality should improve from unhealthy to moderate, Robinson said.

This isn’t the end of smoke in Missoula. Much of the smoke we see day to day comes from Washington, east of the Cascades.

On Sunday, Eastern Washington University postponed a soccer match due to poor air quality in Cheney.

The Howe Ridge fire, burning in Glacier National Park, has grown from 4,000 acres on Friday to 7,835 acres Sunday morning. Robinson said it's difficult to tell the impact of the smoke from that fire in Missoula, but said to keep an eye on fires a little farther west, where wind could bring the smoke southeast to Missoula.

Missoula is forecast to experience more of the cold front on Monday with a high of 69 degrees and a 50 percent chance of thunderstorms in the afternoon, according to the National Weather Service. On Tuesday, temperatures are expected to be closer to average with a high of 79 degrees and widespread haze.

Even with poor air quality in Missoula County and the mountains blanketed in smoke, Missoulians appeared rather unfazed by the smoke with bikers and joggers filling up the trails along the Clark Fork River on Sunday morning.

But the smoke has only had small affect on her weekend plans. After a shorter hike in Pattee Canyon with her boyfriend, Jeff Mann, they decided to stay indoors, out of the smoke, a little more than usual.

Staying indoors, especially for those with heart or lung disease, asthma, smokers, children and the elderly, might be a good idea. Benjamin Schmidt, an air quality specialist with the Missoula City-County Health Department, wrote in an email that those sensitive to the smoke should limit heavy exertion and time spent outdoors.

“If this is the worst, I’ll take it,” Lundgren said, as Mann and their friend Abby Cutting-Smith nodded in agreement.

Lundgren can remember many summers when the smoke has been much worse in Missoula. Last year, she recalled having difficulty seeing across the street during one of her visits.

“As I always say, I can tolerate it as long as I can see the mountains,” Lundgren said.

Fire within 1 mile of Going-to-the-Sun Road; smoke limits aircraft use

COLUMBIA FALLS — The perimeter of the show-stopping Howe Ridge fire is less than a mile from Going-to-the-Sun Road, according to a map distrib…

The century-old Lake McDonald Lodge in Glacier National Park, which was evacuated last weekend due to the Howe Ridge wildfire, will not re-ope…

MARIPOSA, Calif. — Ann Hansen is young, but she isn’t letting that stop her from living her dream, even if it is a dream fraught with danger.

Rain gives Glacier firefighters a respite; air throughout Montana improves, except in northwest

A half-hour rainstorm and shift in winds at Glacier National Park on Monday markedly improved visibility and air quality at Apgar Village, all…

Nora Dalbey, 4, slips down a slide outside of Chief Charlo Elementary School in Missula as the smoke covered mountains loom in the background on Sunday afternoon. The Montana Department of Environmental Quality issued an air quality alert for all 56 Montana counties on Sunday morning.

Hikers stroll into the smoke at the Blue Mountain trail head on Sunday afternoon. Particulate levels were ranging between unhealthy and very unhealthy for sensitive groups all across Montana.