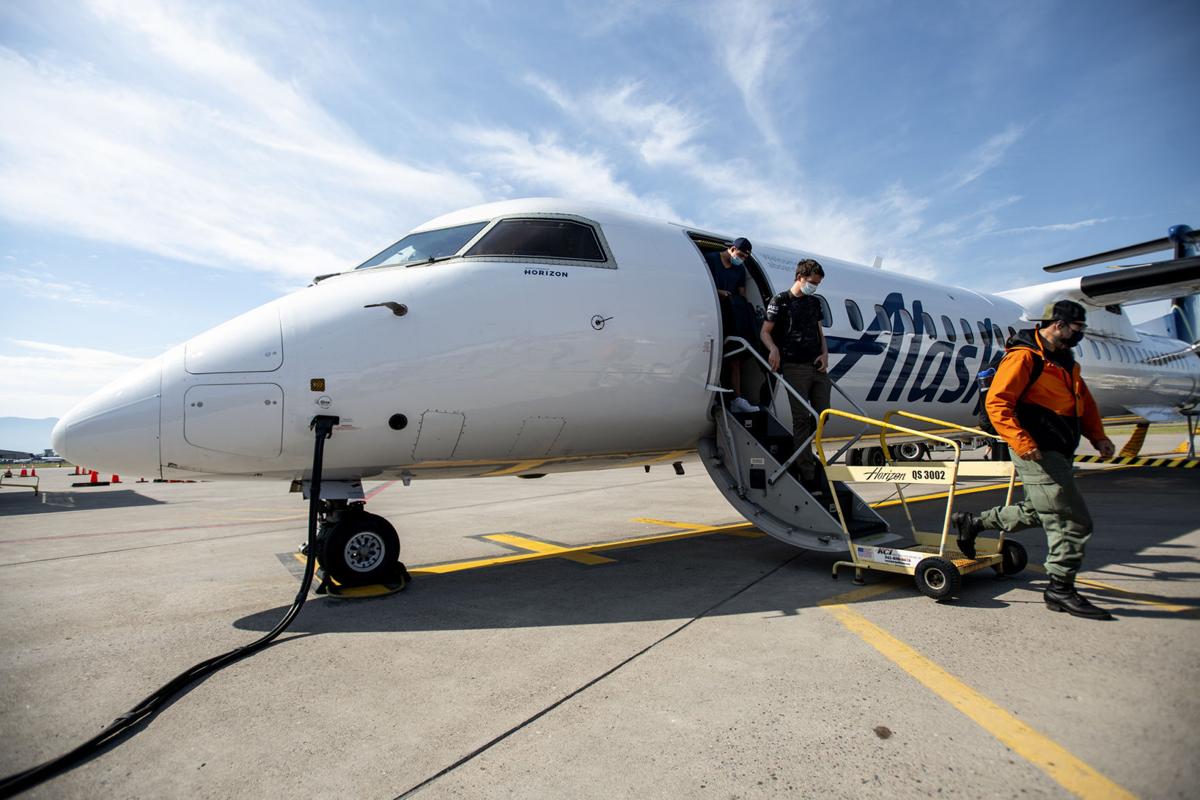 Passengers exit an Alaska Airlines plane at Missoula International Airport on Tuesday morning. The airline company announced Tuesday direct flight options in and out of Missoula to four California cities. 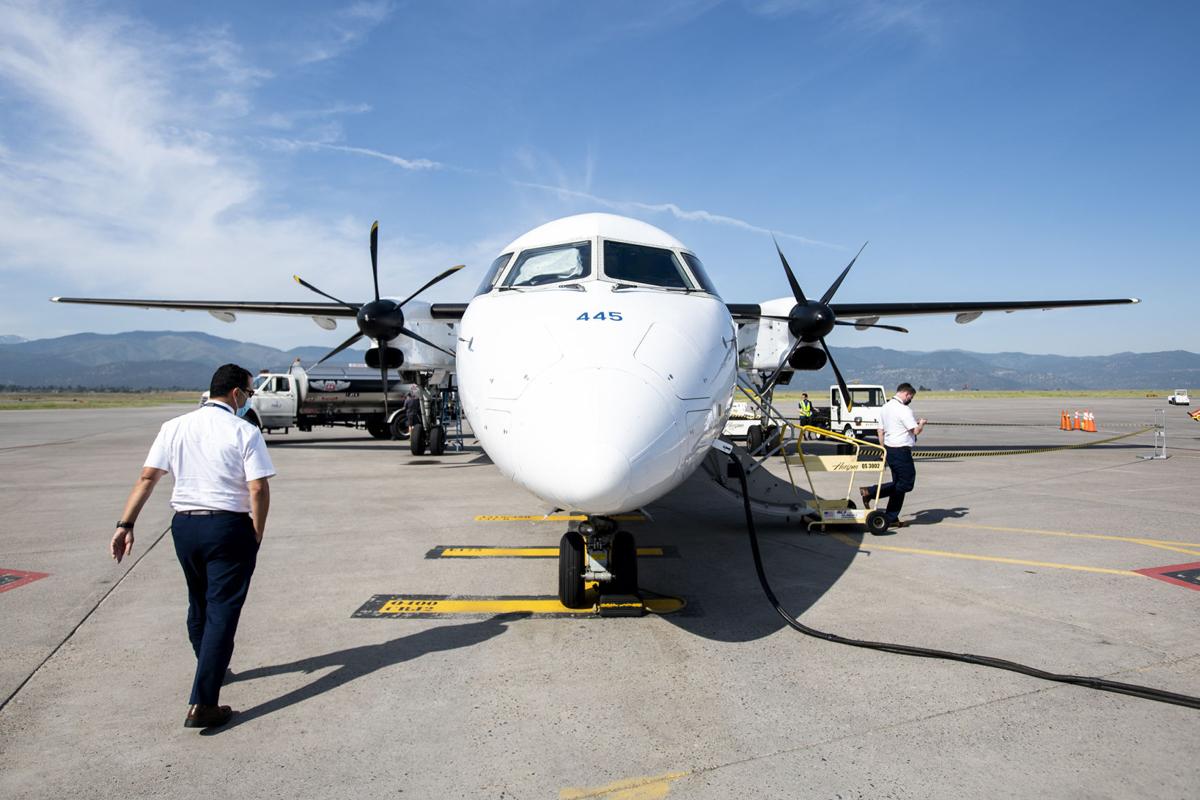 Alaska Airlines is making bold mid-COVID expansion plans and it’s putting western Montana smack dab in the middle of them.

The Seattle-based carrier said Tuesday that, come March 11, it’ll launch nonstop daily flights out of Missoula International Airport to and from San Diego, San Francisco and San Jose and restart service to Los Angeles on an everyday basis.

It’s the largest expansion of air service in the history of an airport that, like those everywhere, is suffering mightily through the global pandemic.

The airport will be fairly bustling with Alaska’s 76-seat Embraer 175 aircraft every day.

“It’s a tripling of destinations and a doubling of capacity, so it’s a really significant investment in western Montana and Missoula,” Brett Catlin said online from Seattle.

Catlin, managing director of Alaska Air’s capacity planning and alliances, said the airline will be putting $30 million capital into Missoula.

“This announcement is some of the first really good news that we have gotten for tourism and the business community for awhile now,” Barbara Neilan, executive director at Destination Missoula, said in a virtual press conference.

Alaska is on the move. In recent weeks the airline announced new daily flights connecting San Jose to Spokane and Redmond, Oregon; and connecting San Diego to Cancun and Fort Lauderdale, Florida. Bozeman is among a number of new destinations from Los Angeles for Alaska, which last week announced what Catlin called a “strategic alliance” with American Airlines.

The so-called One World Alliance with a dozen other airlines opens up the world to Missoula.

“The places that you’ll be able to go on a one-stop basis from Missoula, whether it’s Sydney or Hong Kong or Auckland or over to China and Japan and so on … it really does open up the globe in a way that may not have been possible before,” Catlin said.

But why here, and why now?

Missoula air service has been crippled by the coronavirus, from 45,000 enplanements in June 2019 to fewer than 11,000 last month. That represents a respectable recovery from the first couple of months since the pandemic arrived, but airport director Cris Jensen said Tuesday the numbers have plateaued in July.

For Alaska, it’s the opportune time to take advantage of gaining more of a foothold into one of the markets where it’s long wanted to expand.

“As we come out of the current lull in demand we want to be positioned to have the network that we believe is the future of Alaska and our air group, inclusive of Horizon,” Catlin said. “We want to plant our flag. We want to be very deliberate and clear about where we want to grow.”

While airports in Kalispell and Bozeman have places in Alaska’s plans, the focus is on Missoula.

“We want to be the largest carrier, we want to be the most loved carrier in Missoula,” Catlin said. “So this gives us an opportunity to spend the next seven or eight months building up a beachhead so next summer we’re really positioned.”

Air travel to and from the Bay Area in California has long been a lobbying point for Missoula businesses.

“For years we’ve heard from businesses in our fastest growing sectors that many of their strategic partners, their clients and their customers in these markets, and that direct service to these cities would facilitate high-paying jobs and more growth for Missoula,” said Grant Kier, chief executive officer of the Missoula Economic Partnership.

Jensen said he’s sat in on the meetings where Bay Area service is uppermost on the minds of business owners. “I think we were always thinking San Francisco might be the best we could hope for,” he said. “To get San Francisco and San Jose both for direct access is an amazing opportunity.”

Since 2020 has been and will continue to be volatile, Glacier Country Tourism is focusing much of its marketing efforts on 2021 and beyond, President and CEO Racene Friede said.

“Alaska Airlines’ timing for their expansion to begin in March is incredibly beneficial to this strategy,” Friede said.

A 42-year-old man is jailed after his wife said he assaulted their 3-year-old son, shot her in the shoulder and then told her to tell authorities he had fired at an intruder.

Missoula airport sets another record in 2019

Passenger numbers at the Missoula International Airport set a record in 2019 for the sixth year in a row, topping 900,000 for the first time.

Missoula saw one of the hottest first six months of commercial building activity in 2020, but the pace of residential housing construction was extremely sluggish.

Letters from Montana's 1972 Constitutional Convention shed light on the groundbreaking role of women such as Dorothy Eck, Louise Cross and Marlyne Reichert.

A restored  B-25 bomber, one of two remaining with World War II histories, will make its home in Missoula for eight days.

Passengers exit an Alaska Airlines plane at Missoula International Airport on Tuesday morning. The airline company announced Tuesday direct flight options in and out of Missoula to four California cities.