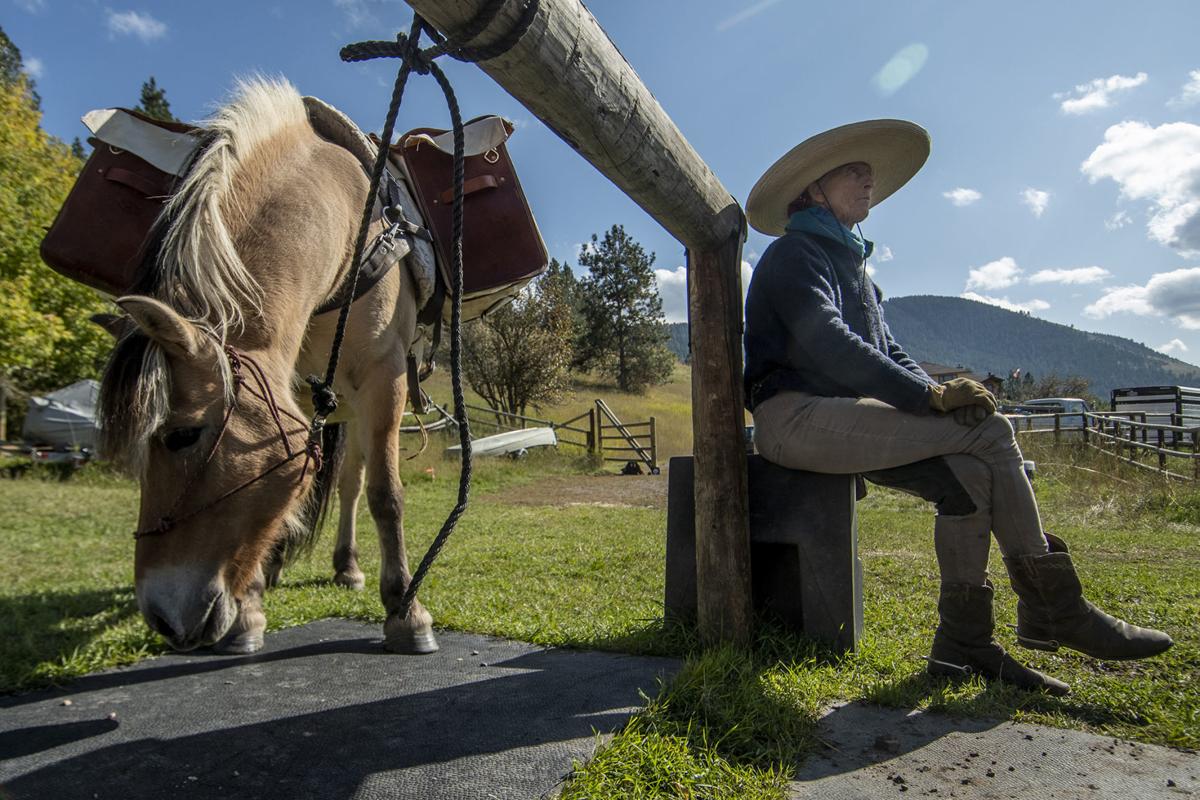 Bernice Ende of Trego sits next to Liska Pearl, her Norwegian Fjord horse, at a ranch at 2100 Lower Lincoln Hills Dr. in Missoula on Wednesday. Ende is the author of "Lady Long Rider: Alone Across America on Horseback," her story of crossing the U.S. on horseback. 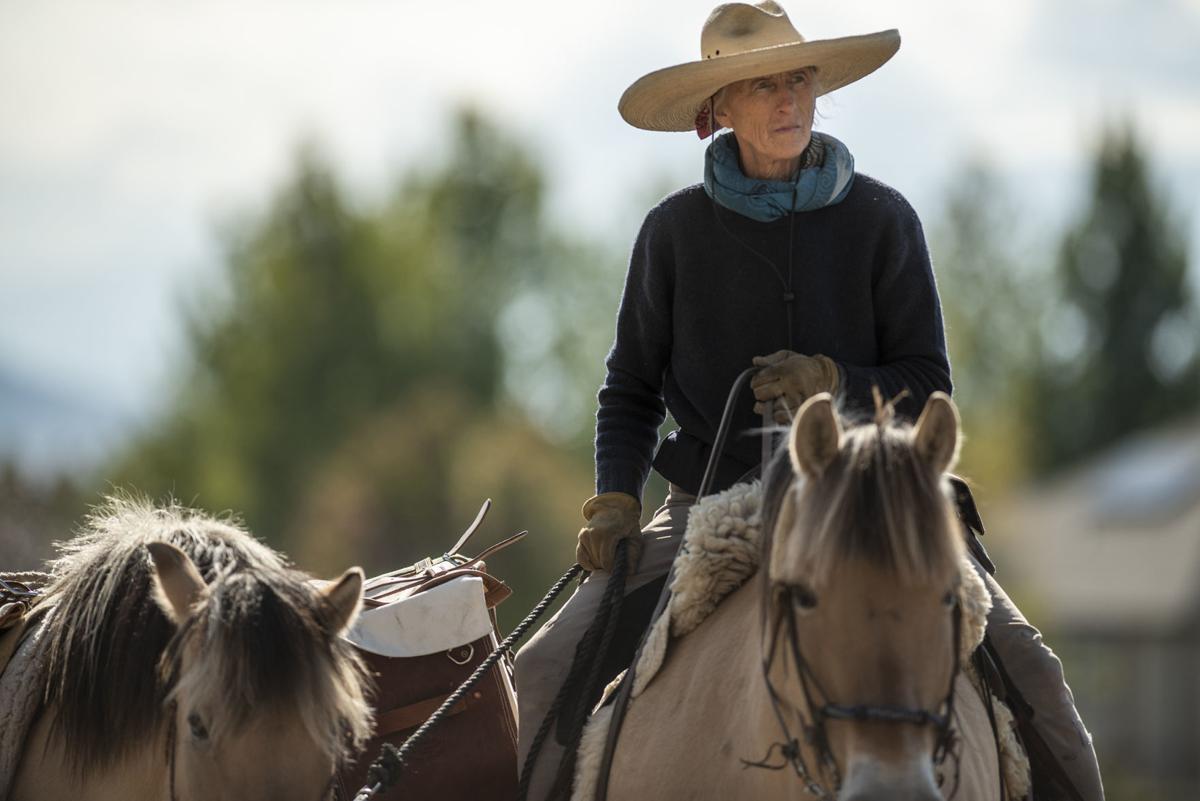 Ende, riding her Percheron/Fjord mare Montana Spirit, has traveled over 30,000 miles since 2005 across the U.S., as well as in Canada and France. 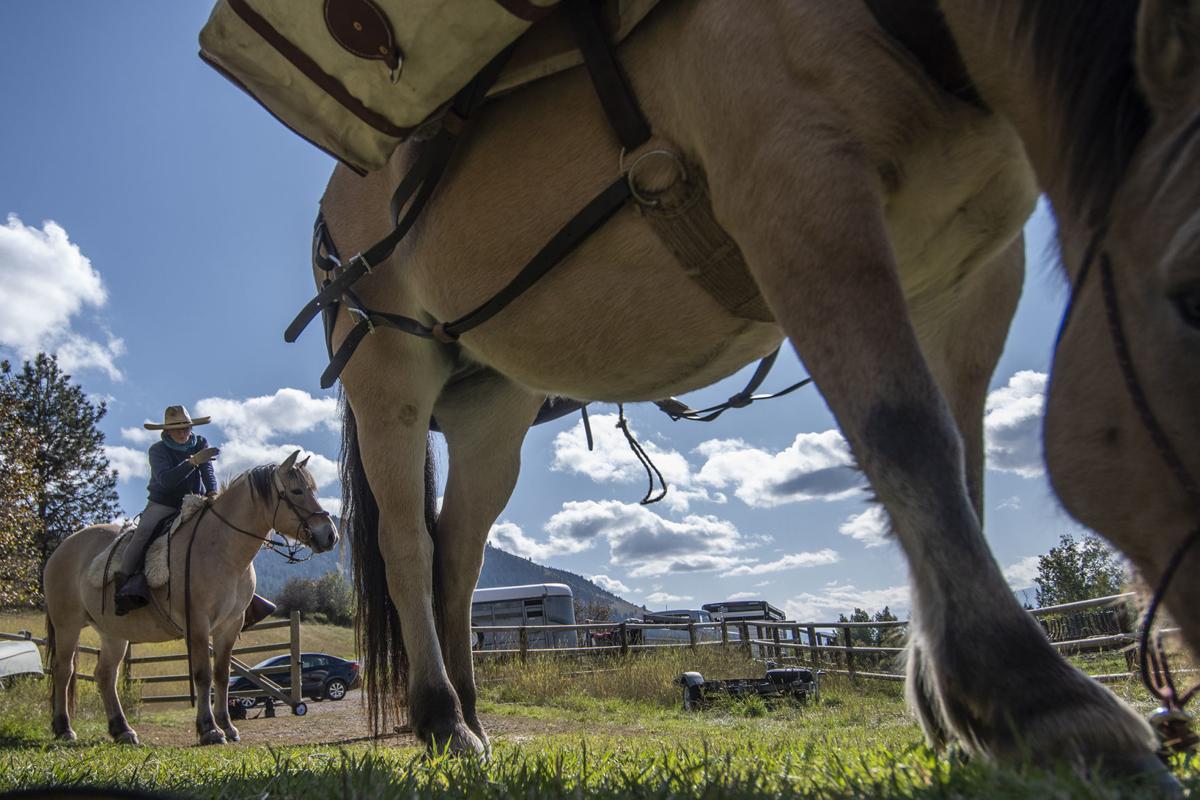 Bernice Ende shows her Norwegian Fjord horses Montana Spirit, left, and Liska Pearl. Ende will be giving a talk at Opportunity Resources, Inc., Thursday at 7 p.m., an event sponsored by Back Country Horsemen of Missoula.

Bernice Ende of Trego sits next to Liska Pearl, her Norwegian Fjord horse, at a ranch at 2100 Lower Lincoln Hills Dr. in Missoula on Wednesday. Ende is the author of "Lady Long Rider: Alone Across America on Horseback," her story of crossing the U.S. on horseback.

Ende, riding her Percheron/Fjord mare Montana Spirit, has traveled over 30,000 miles since 2005 across the U.S., as well as in Canada and France.

Bernice Ende shows her Norwegian Fjord horses Montana Spirit, left, and Liska Pearl. Ende will be giving a talk at Opportunity Resources, Inc., Thursday at 7 p.m., an event sponsored by Back Country Horsemen of Missoula.

We measure our lives in days, weeks and years.

Mile by mile, 10 miles at a time, 30 miles a day in a trot-walk-trot-walk cadence, the former ballet instructor from Trego in northwestern Montana lives with her horses of sturdy Norse heritage.

She’s up to more than 30,000 in 15 years of long rides that have taken her coast to coast (in one long ride) and to two other countries.

“The love and longing of the ride,” Ende said Wednesday. “I’m alone a lot. There I am in the desert with my little fire and the horses next to me with their bells. It’s like: And they wonder why I do this. It’s like it is so magical, it is so transforming. It’s just so ... submerged in life.”

Ende was in town for a gig Thursday night with the Back Country Horsemen of Missoula, after a similar presentation in Kalispell on Tuesday for the horsemen’s group there. At 7 p.m. in the Opportunity Resources, Inc., building, 2821 S. Russell St., she’ll show and tell the story of her 8,000-mile ride from Trego to the coast of Maine, to Sedro Woolley, Washington, and back home. The public is welcome with no charge.

It’s a special event for the Missoula Back Country Horsemen. Dean Hoistad, who invited Ende to town, said there are Back Country Horsemen chapters in most states. The first two were formed some 50 years ago, first in Kalispell, then in Missoula by a small group of men that included fabled outfitter Smoke Elser, Hoistad's neighbor in the Rattlesnake.

The fundamental purpose of Back Country Horsemen, Hoistad said, is to perpetuate the use of horses on public lands.

“For years and years, they volunteered their services to help the Forest Service keep the trails open, and to pack things for the Forest Service workers,” he said. “It went great guns back in the day, but right now it’s kind of a dying thing. But we’re still trying to keep it going.”

The normal monthly meeting was moved to Thursday to fit into Ende’s travel schedule. She’s heading south to New Mexico, not on horseback but with horses in tow, to spend the winter. On the way, she’s stopping in Utah and New Mexico to deliver her message.

Her first book, published by Farcountry Press of Helena, was “Lady Long Rider: Alone Across America on Horseback.” The memoir came out last year, won the Independent Book Publishers Association award for best new voice in nonfiction this year and was the inspiration for a documentary coming out next year.

Ende, 65, is working on a second book she said will bear the title “Mothers, Aunts, Suffragists and Lady Long Riders.”

Her longest ride included stops in New York at the homes and gravesites of Susan B. Anthony, Elizabeth Cady Stanton and Matilda Joslyn Gage, leaders in the suffragist movement in the late 19th century and early 20th.

“I come from a long line of suffragists, and I know that I ride, I can do this, because of them,” Ende said.

It all started with a bad ending.

A lifelong horse person, Ende was coming to the end of a 30-year teaching career in classic ballet in Trego and of a relationship that was “never going to go anywhere.”

She’d been married as a young woman and never remarried. Ende had no children, and didn’t know at the time what a long ride was, let alone that there exists a worldwide Long Riders Guild.

She cried the day she headed out of town on a borrowed horse with her dog Claire Dog, “a rare breed of unknown origin,” trotting alongside. For two weeks she didn’t let go of the horse.

“I was a fairly competent horsewoman, but I got blown out of my saddle when I got out there. It was like, what? There’s no more fences? There’s no security net? There’s nothing,’" she said.

For three years, she slept under the stars with no tent. She lay her head on her saddle blanket and under her overturned saddle.

Ende ended up on that first ride in Albuquerque, New Mexico. Then she turned around and rode back — a distance of 2,000 miles. That was in 2005.

Three years later she started on the epic 8,000-mile ride, becoming the first person documented to have ridden from coast to coast and back again in one continuous trek.

She started her public speaking by riding into a town around noon and tying up the horses — these days it’s Montana Spirit, a Percheron/Fjord mare, and the smaller but sturdy Liska Pearl, a purebred Fjord mare — in front of the local senior center. There she’d play a couple of tunes on the piano, tell her story and land a free lunch. Often it included enough food for a week on the road.

Despite her life of mostly solitude, Ende is a riveting speaker. She remembers what now seems like a brash statement she made in Red Cloud, Nebraska.

“I said I’m going to ride until it changes me completely, and I’m going to be the best long rider that ever lived," she said. “I have to laugh about it now, but at the time I was so serious.”

To be the best she learned how to shoe her horses, how to forage, how to make her own clothes and do her own saddle and tack repairs.

Ende thinks a lot about how it all fits into the world that sometimes seems to have gone crazy. Thousands of people ride with her through her website and Facebook posts, many of them chipping in donations to keep her going.

“I’ve had women who did a motorcycle ride because they saw me, or they went and took a trip somewhere because they saw me and talked to me. It’s humbling, and I don’t take it for granted, I really don’t. I feel very committed to it and see that there’s a very seriousness to this, because of the value it offers to so many people.”

Racing was gone, the racetrack was going.