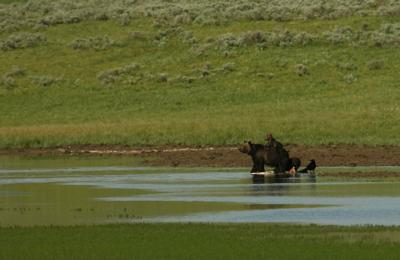 The Hopi Tribe see grizzly bears, known as Hoonaw, as a healer and medicine man.

“He is our uncle,” said Benjamin Nuvamsa, elder of the Hopi Bear Clan and director of the Global Indigenous Council. “He plays a central role in the traditions, ceremonies and the sovereignty of the native people. I do not know of a tribal nation that does not hold the grizzly in high regard.”

To the Eastern Shoshone, grizzly bears are kin, elders. They aren’t to be hunted for food, sport or hides. The Shoshone learn about them as medicine. They learn from them.

“For millennia, our people lived with wolves, bear and buffalo that were here and that system, that ecological balance, has been dismantled,” said Jason Baldes, an ecologist, biologist and member of the Eastern Shoshone in central Wyoming.  “Now we have created a constructed landscape, we’ve plowed it over, paved it over, fenced it in or fenced it out, and we as man think our role is just as important as anything else. But we are a small piece of that puzzle.”

The Eastern Shoshone, Hopi and more than 200 other tribes or tribal organizations have signed a treaty demanding protection for the grizzly bear. Many of them have also joined lawsuits to overturn federal efforts at removing Endangered Species Act protection from grizzlies. In the process, they have expanded the public discussion about which values and voices have a stake in the grizzly’s future.

With the appointment of Laguna Pueblo enrolled member Deb Haaland to the position of U.S. Secretary of the Interior in 2021, American Indians hope their opinions may be heard when it comes to decisions affecting issues like grizzly bears. Haaland oversees the U.S. Fish and Wildlife Service, which is charged with administration of the Endangered Species Act.

Climate change’s effects on grizzly bears have included the decline in whitebark pine trees, which produce a high-protein seed grizzly bears dine on in the fall. How shorter winters with less snow, which could become the norm, will affect grizzlies is uncertain. But an increase in wildland fires will displace bears and other wildlife, and rising temperatures have the potential to forever alter the mountain habitats bears rely on and to which they have been confined by development.

Tribal leaders also raised religious freedom claims when the federal government last proposed delisting the grizzly bear in 2017. They focused on the potential for states to resume trophy hunting of grizzlies if ESA protection was removed.

“Such killing and/or other reduction in population of grizzly bears in the Greater Yellowstone area profoundly disrupts, if not entirely prevents, the grizzly bears’ sustainable recovery to its full habitat range,” a portion of the 2017 complaint read. “… The continued existence and expansion of grizzly bears back into their traditional habitat range is necessary to ensure that the Plaintiffs have the ability to freely express their religious faith.”

“Trophy hunting grizzly bears is part of a killing tradition,” said Don Shoulderblade, a Northern Cheyenne Sun Dance priest and spiritual leader. “We come from a subsistence culture where there is ceremony and great respect accorded those beings you ask to offer their lives so that you might live.”

Tyler noted the grizzly is a sacred being in Shoshone-Bannock culture, and that killing a bear would be akin to the murder of a relative.

The Eastern Shoshone and Northern Arapaho spent years crafting a plan for managing grizzlies on the reservation. It says that the tribes recognize grizzly bears “as strong, as great and as deserving of respect and placed here by the Creator for a purpose.”

The plan also says grizzly bears would be managed as a trophy game animal, in consultation with the Interagency Grizzly Bear Study Team. It does allow for the possibility of bear hunting, particularly of bears that may be creating conflict with humans on the landscape. However, a group of elders and leaders from both tribes repudiated the hunting plan in 2019 in testimony before Congress.

In 2019, the Blackfoot Confederacy drafted a declaration regarding the Northern Continental Divide Ecosystem population of grizzly bears. The document opposes any trophy hunting of grizzlies.

“The Crown of the Continent is the heartland of the Blackfoot Confederacy, and we will not stand by and watch our ancestors’ legacy pass into oblivion with the sacred grizzly bear, and see our children and future generations robbed once more of a vital part of their culture, that which is represented by the sacred and spiritual power of the grizzly bear,” the declaration stated.

Following the delisting decision, tribal governments testified in U.S. House and Senate committees requesting a moratorium until they had an opportunity to contribute their ideas, plans and alternatives. While a federal court blocked the delisting in 2019, tribal leaders have maintained pressure on management debates.

“Those alternatives will provide for cultural, economic and environmental revitalization to tribal communities, and enable economic diversification,” said Tom Rodgers, a Blackfeet Tribal member. “Tribal nations continue to fight for a meaningful seat at the table.”

The Grizzly Treaty calls for government-to-government consultation with all tribes regarding delisting; the raw data behind scientific conclusions; a moratorium on delisting until Indigenous people are consulted; and reintroduction of grizzlies to suitable habitat on reservation lands rather than trophy hunting of the species.

“We want to see the articles of that treaty implemented into future federal grizzly bear management decision-making and management plans,” Rodgers said.

Rodgers said Ryan Zinke, who was Secretary of the Interior under President Donald Trump in 2016, ignored Indigenous people’s requests for consultation before announcing the bear’s removal from protections offered by the Endangered Species Act.

While a delisting may not directly impact management of grizzly bears on tribal lands, it does impact grizzlies living in traditional territories. The Wind River Reservation, for example, was once 44 million acres before the federal government continued to shrink it to the final 2.2 million acres.

The future of grizzly bears should be decided in consultation with tribes because where they exist is still in areas of high cultural importance and value, Baldes said.

“We’re fighting for water rights and buffalo restoration and cultural restoration to allow native people to speak our language and practice our cultures and impose our belief systems on how we treat and manage things,” he said. “My hopes are bears would be secure, that they would be respected and given places to be.”

The Confederated Salish and Kootenai Tribes oversee some of the most heavily-populated grizzly habitat in the Lower 48 States on their Flathead Reservation. Part of their management strategy has restricted one of the most scenic and popular segments of the Mission Mountains from public access in the middle of summer – because that’s when grizzly bears use those high-altitude slopes to gorge on insects.

“The Salish and Kootenai are the gold standard for wildlife and natural resource management among the tribes,” said Cristina Eisenberg, a research biologist with extensive experience on tribal lands throughout the United States. “Bear management isn’t just about the science. It’s about human values.”

Northern Cheyenne Sun Dance priest and spiritual leader Don Shoulderblade wrote a book, “Almost Ancestors: The Grizzly Bear in Cheyenne Religion,” that is scheduled for publication this year. Shoulderblade died on Sept. 26 before the book was in print.

In the book, he provided this Native story about a feature in Yellowstone National Park called Obsidian Cliff.

Nahkohe, the word for bear, is a near-homonym of náhko’e, mother – a term used only in addressing one’s mother. There is thus a link between bears and the maternal aspect of women, one that is brought out in the story, in which the two meanings of the term are played upon.

One fall, some women were singing while picking chokecherries and bear berries beside a stream. An unmarried young woman, engrossed in the singing and her work, was suddenly confronted by a large grizzly bear; her companions had fled. The grizzly approached and picked her up, carrying her to his den in the mountains. There, a cub came forward and addressed her as mother. The young woman indeed became like a mother to the cub, but she continued to miss her people. When the cub was bigger, it addressed her one-day.

“Mother,” it said, “It is nearly time. Soon we shall leave both this place and my father.”

It told her to make many pairs of moccasins, as their trail was long. In the spring, when the thunder had returned, and the cub’s father was gone hunting, the cub pushed aside the stones and logs with which the bear had concealed the entrance, and the two of them took flight. After suffering various difficulties, they reached the Cheyenne camp, and walked into it hand in hand, so that the people would know the young bear was friendly.

The young bear soon became part of society, and struck up a friendship with two boys, named Hatchet Keeper and Fastest Runner (i.e. Thunder and Lightning). One day the three of them decided to go to an ancient place, one they had not seen before. After traveling west for several days, they came upon an immense rock cliff that barred their way. There was no way around it.

“There is only one thing to do,” said the bear.

In response, Hatchet Keeper took his axe and struck the wall of rock. Great chunks of rock flew off the rock wall until its top was jagged, like teeth. Then he struck the cliff so violently that when he jerked the hatchet back, most of the head remained embedded in the rock wall. That is how the Obsidian Cliff in Yellowstone was formed – it is the head of Hatchet Keeper’s axe.

The story, which relates both Thunder and the grizzly bear to the creation of the Obsidian Cliff, also suggests the awe with which the early Indians must have confronted this monument, seeing themselves reflected darkly in the shiny black stone, as though they were seeing themselves in the Spirit World. As the color black is associated with winter, it is small wonder that the Obsidian Cliff was the site of the Winter Solstice Rite in ancient times. 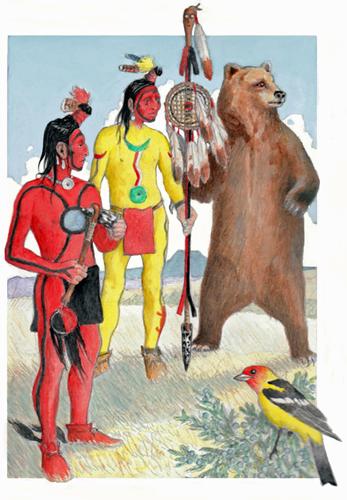 Artist Winfield Coleman created this illustration for a new book that includes the Cheyenne myth surrounding Yellowstone National Park's Obsidian Cliff, an important source of stone for tools and weapons. The book, written by Don Shoulderblade, is titled: “Almost Ancestors: The Grizzly Bear in Cheyenne Religion.” 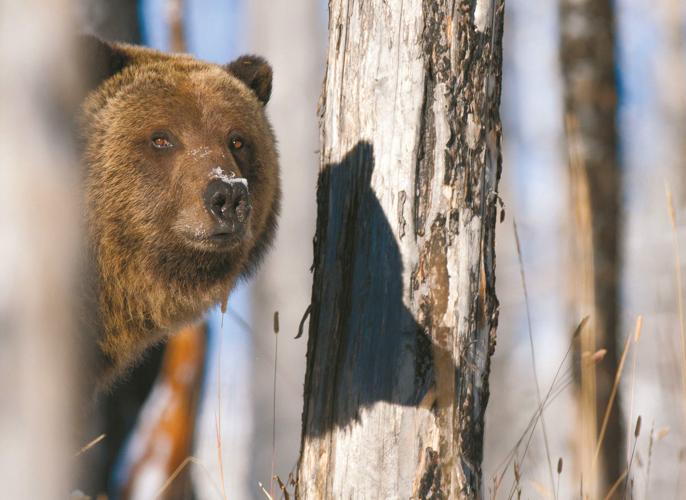 Grizzly bears are an important part of Native American lore, culture and ceremony. Recognizing that, more tribes are attempting to exert control over how the big bears are managed.