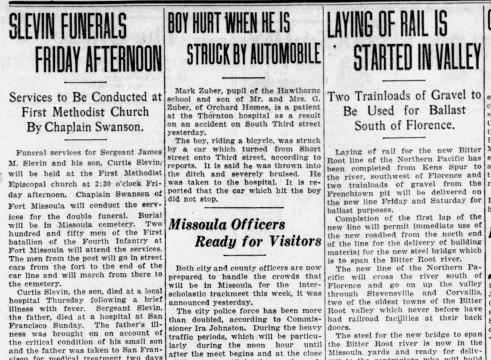 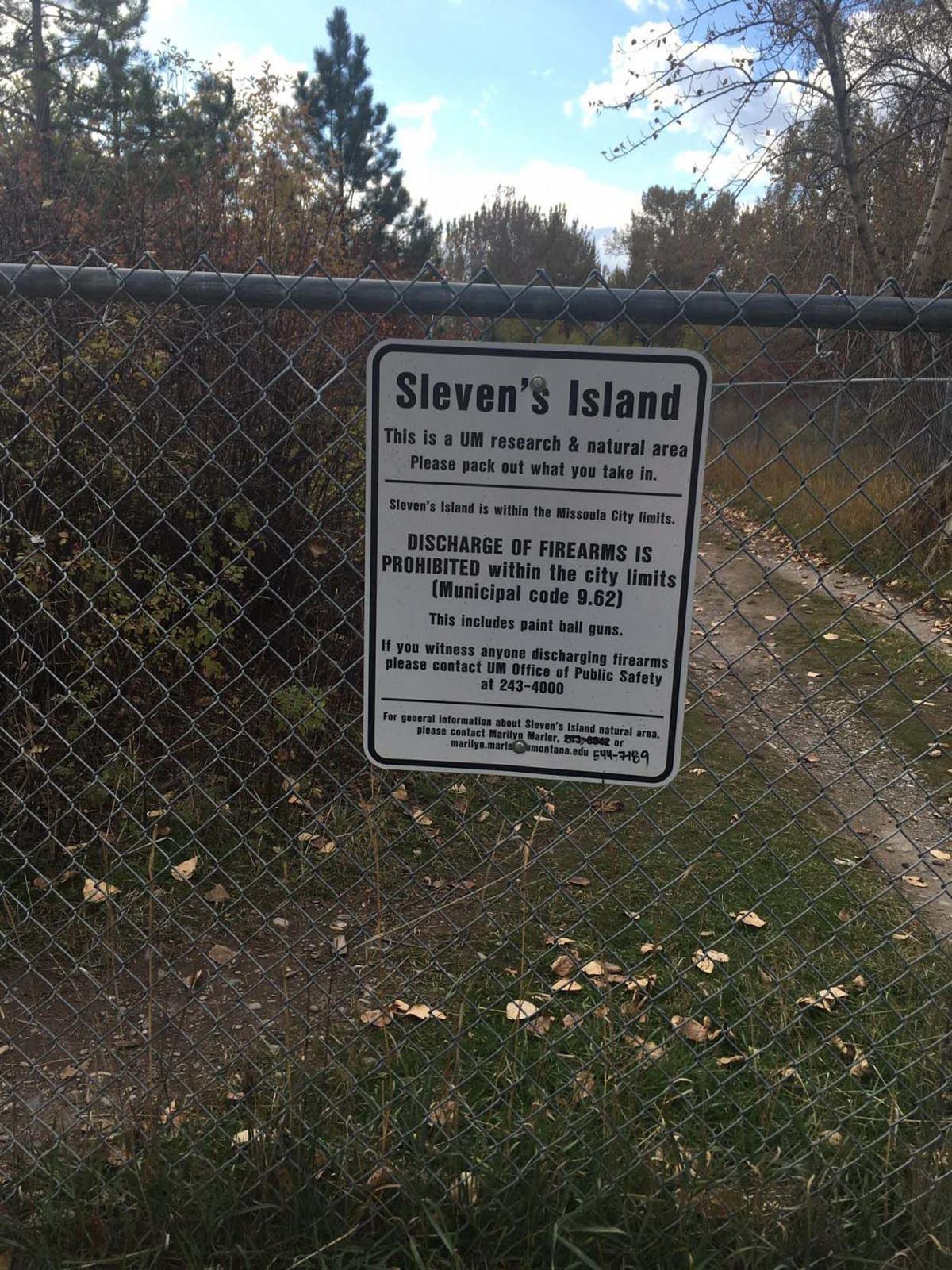 On the other, below the water tower at Fort Missoula, is Slevin Island, a peninsula of wild in the Bitterroot River.

Between the two, a story of dedication, service and heartbreak lost in the mist of time.

James Slevin served nearly 30 of his 51 years in the U.S. Army. He was born in Evansville, Indiana, in 1877, coincidentally the year of the establishment of Fort Missoula, his final post.

The Missoulian kept pretty good tabs on the sergeant, usually in its “Fort Missoula Notes” column, from the time he and Lydia arrived at the fort with their three children in 1924. That first October, Sgt. Slevin went on a 10-day hunting pass to Thompson Falls with a corporal and a couple of privates. He returned with one of the privates, each with a deer. There was no mention of the other two soldiers but at least one of them, Cpl. Joe Falker, made it home OK. The next October Slevin and Falker went hunting in the Seeley Lake vicinity.

Mr. and Mrs. Slevin were among the military couples who were entertained at cards on a Saturday evening in December 1924 at the home of Sgt. and Mrs. Walter Busker.

In January 1925 came the note that Slevin had been appointed first sergeant in Company C of the Fourth Infantry at the fort, succeeding Henry Brosemer, who retired Jan. 12.

The Army discharged Slevin on April 6, 1926, a Tuesday. He re-enlisted on Wednesday for the last time.

“First Sergeant Slevin has over twenty-five years of active service to his credit which includes service in all of America’s possessions as well as at many stations within the continental limits of the United States, and he is one of the noncommissioned officers of the old army which formed the nucleus around which the gigantic organization of the World War was built,” the April 9, 1926, Missoulian reported. “He was commissioned a lieutenant during the momentous days of 1917 and 1918.”

After the war, Slevin went to the Hawaiian Islands with the 44th Infantry. He and his young family remained there until he was transferred to Fort Missoula.

In February 1928, the Slevin family had a wedding on its hands. Their oldest son, Derwood, married a Missoula girl, Fern Carnell, at her home at 900 Stephens.

As captain of the Fort Missoula rifle club, Sgt. Slevin wrote a letter to the editor on March 3, 1928, replying to charges of the rival Garden City club that it was receiving unfair treatment in the local shooting league.

“If the protesting club has not been able to equal the scores of the C company team up to the present time,” he concluded, “the challenge to a 'shoulder to shoulder' match seems to be merely a gesture.”

The bad news started rolling in just weeks later, on April 25. Curtis Slevin, a student at Franklin School and at 12 the Slevins’ youngest child, was in St. Patrick Hospital in critical condition with tick-borne Rocky Mountain spotted fever. On Thursday, May 3, he succumbed.

James Slevin was away in San Francisco when Curtis became sick.

“Anxiety over the condition of his son caused a nervous breakdown for the father, and two days before the son’s death the father was taken to the San Francisco hospital,” the Missoulian reported.

A message from San Francisco, on Monday, May 6, brought good news: James Slevin was recovering and would probably be home in a month.

“Twenty minutes later the message announcing his death arrived,” the Missoulian reported the next day.

Slevin had been making plans to retire from the service in December, and "his family had expected to go to California in June to locate,” the paper said.

Services for young Curtis Slevin were put on hold, and on May 11 a double funeral was held at the First Methodist Episcopal church on East Main Street. The First Battalion of the Fourth Infantry at Fort Missoula, 250 men strong, attended in a body.

It’s reasonable to assume that, outdoorsy as he was, James Slevin found special sanctuary on the little “island” behind Fort Missoula. It’s a mark of the esteem in which he was held that the following April, the commanding officer at the fort issued an "official order" to name it Slevin Island.

“Work of clearing off the island to improve its general appearance, to drain its marsh and to stop the breeding of mosquitoes has already begun,” the Missoulian noted. “The island, which contains three or four acres, is swampy and because of the dense vegetation and brush growing there, the sun never reaches parts of it, according to officers of the post.”

Fort Missoula is no longer a military station. Slevin Island, closer to 20 acres now, is a University of Montana research and natural area, replete with sweat lodges maintained by Native students.

Over the years it has been referred to, in the Missoulian and elsewhere, as Slevin’s Island (though Sgt. Slevin never claimed it) and Sleven Island. The sign on the gate post says “Sleven’s Island.” Wrong or right, the urban island, along with the Slevins headstone across town, are gentle reminders of a man and a family whom tragedy touched and time left behind.

More in Missoula Rewound: A look at Missoula history through the Missoulian archives (4 of 53)

Missoula Rewound is a weekly look through the Missoulian's online archives that date back to 1890. For information go to missoulian.newspapers.com.

We called her “Mrs. Archie Bunker” when she died.

A 100-year march to an oompha beat