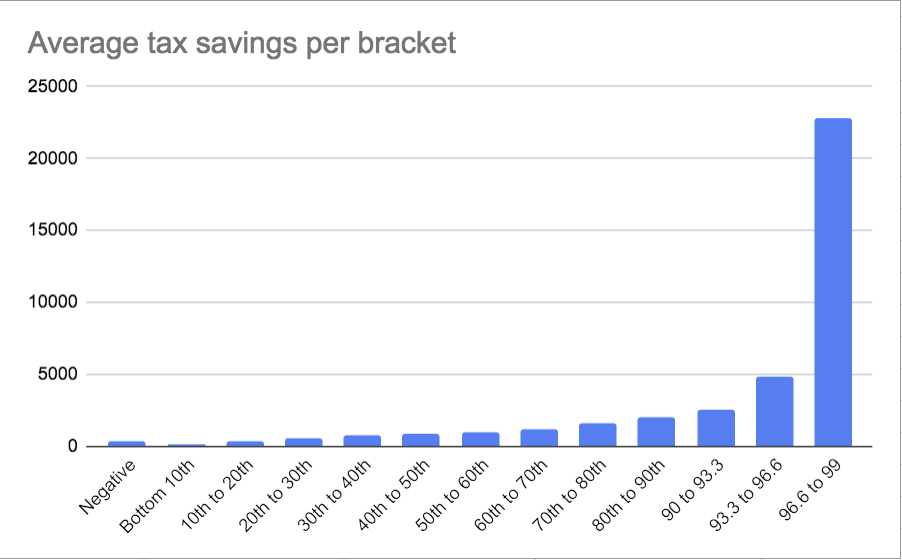 The average savings per tax bracket by Montana taxpayers due to the 2017 Tax Cuts and Jobs Act, compared with what they would have paid without the law, for tax year 2018. The results for tax year 2019 are similar. 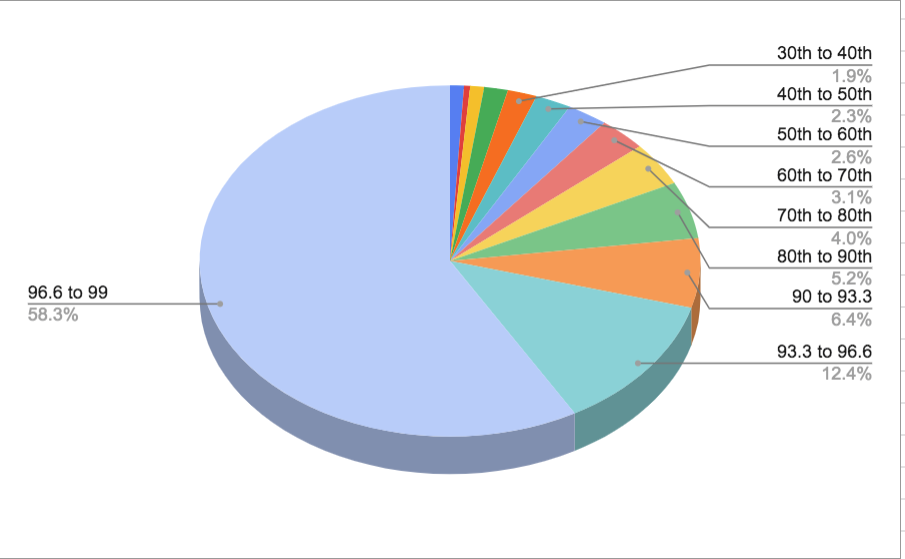 A breakdown of the savings from the Tax Cuts and Jobs Act in Montana for tax year 2019.

A breakdown of the tax savings from the Tax Cuts and Jobs Act by income decile.

​The top 3.4 percent of Montana's highest-income earners saved a combined total of nearly $360 million in federal income taxes in tax year 2019 thanks to a tax law passed by Republicans in 2017, the Tax Cuts and Jobs Act.

Because the savings were similar in tax year 2018, that means that the approximately 16,000 highest-income Montana taxpayers paid about $719 million less in federal income taxes, combined, over the course of two years than they would have without the law.

The Montana Department of Revenue has access to estimated federal income tax data for Montana taxpayers, and the Missoulian filed a public records request for data from 2018 and 2019, the first two tax years the law was in effect.

The Missoulian published a a two-part analysis of the effects of the law on tax year 2018 in October.

For tax year 2019, the 339 Montana taxpayers who earned more than $2 million a year saved a combined $56.3 million. Those 339 people earned well over $2 billion combined and paid a total of over $562 million in taxes, combined. Without the 2017 Tax Cuts and Jobs Act, they would have owed the federal government $618.4 million.

Almost all taxpayers got a tax cut from the law, although when comparing total dollars saved, the benefits were disproportionately skewed toward those in the upper income brackets. Those in the highest incomes do still shoulder a proportionately heavier burden of the overall tax load, however.

Almost everyone got a tax cut due to the new law. Those taxpayers making less than about $7,000 a year paid about 4.62% less of their income in taxes than they would have without the law, an average savings of about $155 each in 2019. The total two-year tax savings for those 48,122 Montanans in that income category was an average of $309.

After more than two years, there's still no consensus about whether the law was beneficial to Americans and the economy.

"The Tax Cut and Jobs Act of 2017 continues to largely benefit the wealthiest in Montana," said Heather O'Loughlin, the co-director of the left-leaning nonprofit Montana Budget and Policy Center. "Those individuals making more than $2 million in 2019 received an average tax cut of over $160,000 a year, enough to purchase a new home in parts of the state. Meanwhile, half of Montanans, those earning less than $40,000, received an average tax cut of only $458, not enough to cover one month of rent or a mortgage payment.​"

Daines and his tax policy staff strongly support the act, saying many provisions are progressive and benefit those in the lower income brackets.

"I strongly support the Tax Cuts and Jobs Act, and I worked hard to ensure this important legislation (that) cut taxes for small businesses, helped create jobs and put more money in the pockets of hardworking, middle-class Montanans instead of Washington DC bureaucrats and lobbyists," Daines said in an email to the Missoulian. "Hundreds of thousands of Montanans and small businesses are benefiting from changes made by the Tax Cuts and Jobs Act, such as the doubled child tax credit, doubled standard deduction, the elimination of the individual mandate, and the 20 percent deduction for small businesses. Thanks to the legislation, Montana saw rapid job creation and wage growth in 2018 and 2019, all while Montana’s state revenue collection exceeded projections.”​

According to the National Taxpayers Union Foundation, in tax year 2018 the top 10% of income earners in the U.S. bore responsibility for over 71% of all income taxes paid. That's an increased tax share compared with 2017, according to Foundation analyst Demian Brady.

In an email to the Missoulian, a spokesperson for Daines noted that unemployment was going down and wages were rising in early 2020 before the pandemic hit, and that a family of four making $55,000 paid zero federal income taxes thanks to the Tax Cuts and Jobs Act.

Gov. Gianforte has made tax cuts one of his top priorities.

According to Montana State Bureau reporter Holly Michels, the new governor's plan will cut the top marginal individual income tax rate from 6.9% to 6.75%, affecting half the state's taxpaying residents. The taxable income threshold for people in the top tax bracket is $18,400. Taxable income is the part of a person's income that is taxable after any allowable deductions from their gross wages.

Michels wrote that an analysis of Gianforte's proposal by the Montana Budget and Policy Center and the Institute on Taxation and Economic Policy found that people earning from $40,000-$63,000 would see a reduction of about $14.

The Congressional Budget Office projected the 2017 Tax Cuts and Jobs Act would increase the projected American federal deficit to almost $1.9 trillion with interest from 2018 to 2028.

O'Loughlin with the Montana Budget and Policy Center said they'll be keeping a close eye on the Montana Legislature's budget proposals, because Republicans have vowed to cut spending along with implementing tax cuts.

"As we move into this legislative session with many policymakers looking at proposed tax cuts, it is important to drill down on who ultimately benefits and what the loss of revenue will mean for critical investments in our communities, like public schools, roads and bridges, and improving access to mental health and substance use disorder treatment," she said. "We’ve seen with this federal law and efforts back in 2003 in Montana that the reality of these tax cuts pushed by special interests ultimately benefit a small minority of taxpayers, at the cost of services for families across the state.​"

The Republican Tax Cuts and Jobs Act of 2017 included an geography-specific provision that is similar in many ways to Missoula’s Tax Increment Financing program.

"What's happening is an unprecedented rise in demand without a rise in supply to meet that demand," said Danny Tenenbaum, a Democrat representing Montana House Dist. 95.

An increase in U.S. housing starts, combined with a surge in home remodel projects during the pandemic, has boosted lumber prices and helped western Montana lumber mills.

The average savings per tax bracket by Montana taxpayers due to the 2017 Tax Cuts and Jobs Act, compared with what they would have paid without the law, for tax year 2018. The results for tax year 2019 are similar.

A breakdown of the savings from the Tax Cuts and Jobs Act in Montana for tax year 2019.

A breakdown of the tax savings from the Tax Cuts and Jobs Act by income decile.