Become a Member
Read Today's E-edition
Share This
Another Missoula WWII hero dies; Marvin Strombo was 96
0 Comments
Share this
1 of 2 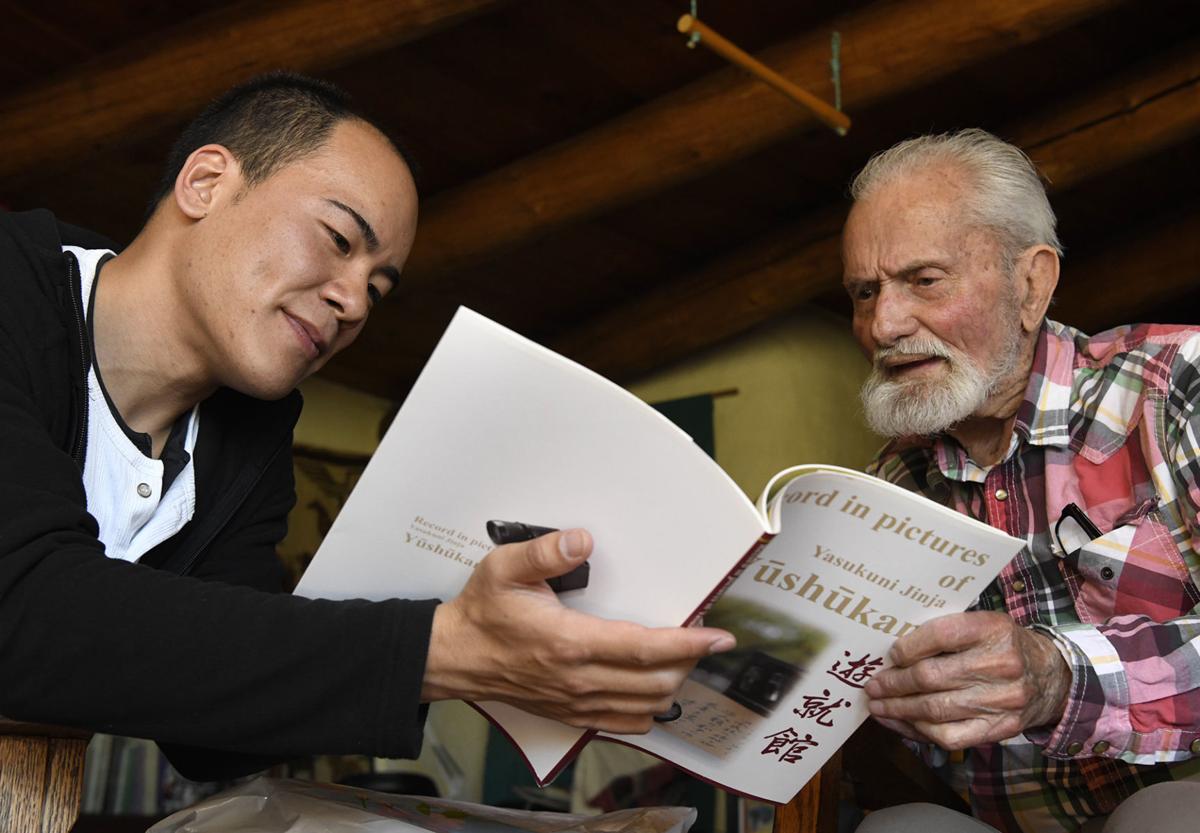 Naoki Yasue, left, looks through a Japanese picture book with Marvin Strombo at Strombo's daughter's home near Florence in October 2018. Yasue is the grand-nephew of the Japanese officer whom Strombo found dead in the Battle of Saipan in 1944 and took a good-luck flag off him. Strombo returned the flag to Yasue's family in Japan in August 2017. 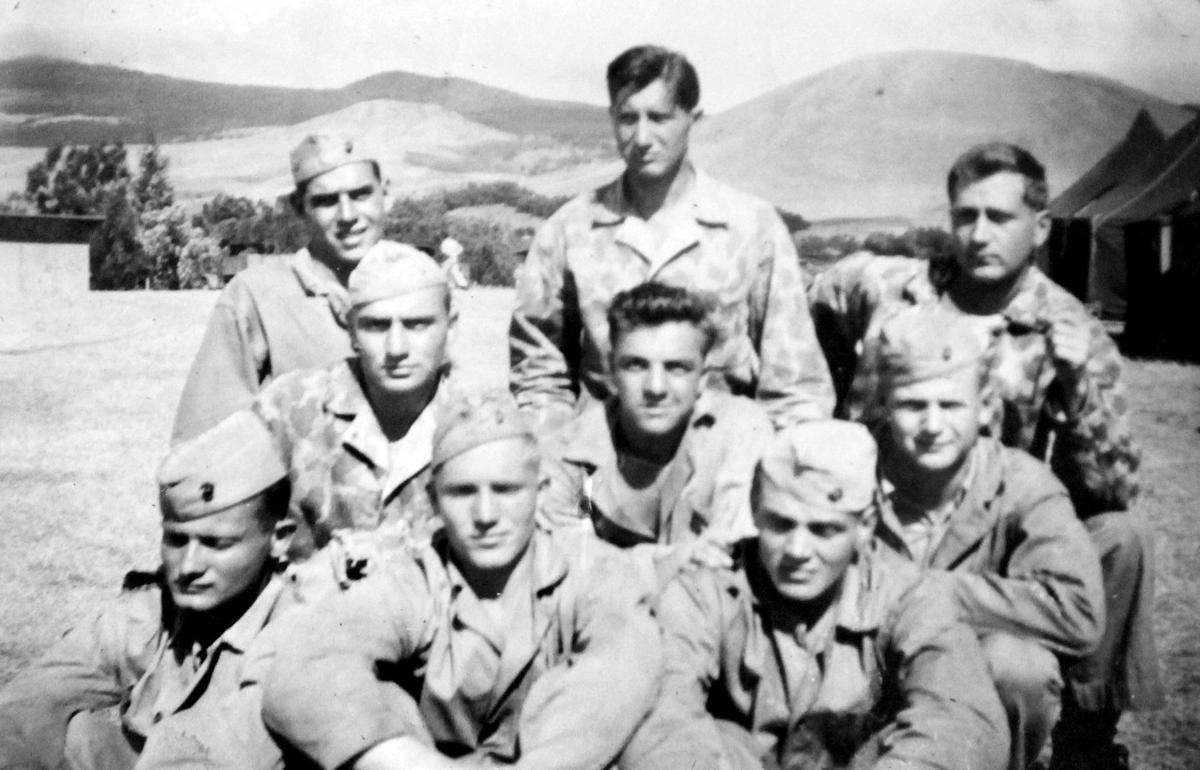 Marvin Strombo and his best friend, Roscoe Mullins, are in the lower left of this photo of the "40 Thieves On Saipan" during World War II.

Marvin Strombo, a United States Marine who as a young man on war-torn islands of the Pacific saw humanity at its worst and journeyed to Japan at age 93 to display it at its best, died Tuesday night.

Strombo grew up in Dixon and lived his last six decades in Missoula, in the log home where he drew his final breath. He turned 96 in December.

"What a good man he was, or is," Sandra Williamson said Tuesday in her father's final hours. "He lived a long, full life and taught a lot of lessons along the way. We're so grateful we had him."

Strombo was in good health earlier this month, when a book about his swashbuckling Scout-Sniper platoon in the 6th Marine Regiment during World War II was published. He was one of author Joseph Tachovsky's primary sources as the ranks of the 35 Marines who survived the Battle of Saipan dwindled.

"It's funny. Marvin and Roscoe were best buddies from boot camp through Tarawa, Saipan, Tinian and then they acted as a police force in Japan after the war. They were the last two," said Tachovsky, who began researching "40 Thieves On Saipan" after his father's death in 2011.

Frank Tachovsky was the highly respected commander of the "40 Thieves" who were, as the book jacket cover states, "trained in a ruthless array of hand-to-hand killing techniques" to "wreak havoc in and around, but mostly behind, enemy lines." Those lines moved steadily and bloodily north along the 12-mile long island after U.S. Marines stormed the southern beaches of Saipan on June 15, 1944. Victory was declared on July 9.

"Daddy loved the book," Williamson said. "He thought it was wonderful that the stories of all those men were going to be told. That mattered a lot to him."

By coincidence, the penultimate survivor of the more famous Doolittle Raiders who bombed Tokyo in 1942 made Missoula his longtime home. David Thatcher died at age 94 on June 22, 2016 — four years and a day before Strombo's death. National news outlets, including the New York Times and Washington Post, paid fitting tribute to Thatcher, and his name has since been attached to the Veterans Administration clinic in Missoula and a memorial highway in southern Montana.

Like many war survivors, Strombo kept his memories to himself. Tachovsky was able to comb some out in frequent visits to Missoula from his own home in Wisconsin. Strombo shared stories of his days on Saipan freely with the Missoulian for a Veterans Day profile in 2016. One of them turned into what his daughter called a "life-changing" experience.

Rex and Keiko Ziak of the Obon Society of Oregon tracked down the family of a Japanese officer who died on Saipan and whose "Good Luck Flag" Strombo claimed as a souvenir. In company with the Ziaks, Williamson, Williamson's sister Brenda Strombo of Portland, Oregon, daughter Emily Williamson and Tachovsky, Marvin traveled to a remote village in Japan in August 2017 to return the flag.

In a moving ceremony, he presented it to three siblings of Sadao Yasue, whose body Strombo came upon among more than 100 fresh corpses on the outskirts of Garapan, the island's capital. In his book, co-written by longtime friend Cynthia Kraack of Minneapolis, Tachovsky described Strombo's encounter outside Garapan. It occurred on June 25, 1944, or 76 years ago Thursday.

Strombo broke off from the six-man group when he saw among the bodies what appeared to be a small World War I cannon. As he approached it, it vanished in the shimmer of the tropical heat.

"In its place lay a dead Japanese captain, as peaceful as if he were sleeping," Tachovsky wrote.

Strombo gazed at the placid face.

"No visible wounds, very little blood, Strombo guessed that he had been killed by a mortar strike," Tachovsky reported. "Rummaging through the warrior's pack, he found many family photos: mother, father and their children in a mountainous village strikingly similar to his home in Montana. He's no different from me, Strombo thought. "Standing up to leave, he noticed the captain's Good Luck Flag peeking out of his uniform."

Strombo first decided against taking the flag, knowing it to be sacred to the Japanese, Tachovsky said. But he changed his mind.

"If I don't take it, somebody else will," Strombo said, and tucked the flag into his dungarees. "I promise I'll give it back to your family someday."

When he did 73 years later, he became the first U.S. veteran to return a Good Luck Flag in person to Japan, at least through the Obon Society.

"I can almost smell my brother's skin from the flag, so we know that you have kept it well for so long," 89-year-old Tatsuya Yasue said during the hour-long ceremony that the Ziaks arranged to have live-streamed. They also produced a 16-minute video of Strombo's journey. It's had 2.7 million views since it was downloaded on YouTube in September 2017.

The act was typical of her father, Sandra Williams said Tuesday.

"To be able to go back there and do something that brought the family peace meant something to him," she said. "It’s hard when you're in the fog of war, just trying to survive. To be able to go over there and bring comfort instead of bullets, to him that was almost life-changing."

Strombo was one of four brothers who fought in and survived World War II. Oliver Strombo, two years Marvin's elder, was with the Second Marines in the same Pacific battles. Marvin reupped after the war and served in the Korean conflict as well.

He had nightmares, mostly of waking up in the throes of a Japanese banzai. But he handled what has since been labeled Post-Traumatic Stress Disorder, or PTSD, better than many. He was discharged in 1951. Starting in 1959 his only marriage produced the four children who were with him on his deathbed Tuesday night. They are, in order of age, Noemi Bassler of Florence, Brenda Strombo, Sandra Williamson and Tim Strombo of Redondo Beach, Calif.

"When Marvin's wife left him shortly after their fourth child was born, he found that being the single parent of four was the best medicine in the world to help him ease his demons," Tachovsky wrote in "40 Thieves."

"He just put all of his focus on raising us and making sure that we felt loved and safe and had a roof over our heads," Williamson said this week. "We were to him what he was to us, just that saving grace."

Tachovsky was at his home in Sturgeon Bay, Wisconsin, late at night nine days ago when he received an urgent email from Brenda Strombo asking him to call her. The news was bad: Marvin, who had been so fit and alert for his age, had taken a dramatic downturn. Hospice was called in.

Tachovsky put everything else aside and jumped in his car the next morning, a Wednesday. After the familiar 1,500-mile drive, he pulled up to the Strombo house Thursday night.

"It's Marvin," he said simply. "All these old guys have become like second and third fathers to me. I went to Japan with him, and I wanted to see him one last time."

Work beckoned Tachovsky home on Monday, and Strombo drifted into unconsciousness that evening. He passed away shortly after 10:30 p.m. Tuesday.

"Marvin kind of rallied when I was leaving," Tachovsky said. "The last cognizant thing I heard him say, he just looked me and said, 'Joe, Semper Fi.'"

The Marine Corps motto that means "always faithful" is also the final line in Tachovsky's book.

In his final hours Tuesday, Strombo was surrounded by his children, grandchildren and great-grandchildren.

"We were all singing to him, and he just finally let go," Sandra Williamson said. The selections ranged from "old hymns and 'Old Paint, I'm goin' to Montana to throw the hoolihan,'" she said, to "You Are My Sunshine," which their father used to sing to them.

As per his wishes, he'll be buried at the Dixon Cemetery on Friday in a private ceremony. Swathed only in a blanket, the remains of Marvin Strombo will be laid to rest with his parents, Ed and Mary, and other family members. A memorial service, possibly in July, is pending due to COVID-19 concerns.

Echoes of dissent: Missoula's history of protest dates back more than a century

A Missoula City Fire Department firefighter tested positive for COVID-19 on Monday, one of four new cases in Missoula in the last 24 hours.

Tribes turn to musicians to raise kids' awareness of COVID

HELENA — The scene is the pedestrian bridge over U.S. Highway 93 in Pablo. In the midst of a gaggle of dancing children, a young hip-hop artis…

Montana Highway Patrol Missoula District Capt. Jim Kitchin retires Thursday, marking 20 years with the state police agency while based in his own hometown.

Flathead County officials have released the name of a Whitefish man who died in a Flathead River rafting accident.

"We gotta stop fighting amongst ourselves."

Naoki Yasue, left, looks through a Japanese picture book with Marvin Strombo at Strombo's daughter's home near Florence in October 2018. Yasue is the grand-nephew of the Japanese officer whom Strombo found dead in the Battle of Saipan in 1944 and took a good-luck flag off him. Strombo returned the flag to Yasue's family in Japan in August 2017.

Marvin Strombo and his best friend, Roscoe Mullins, are in the lower left of this photo of the "40 Thieves On Saipan" during World War II.