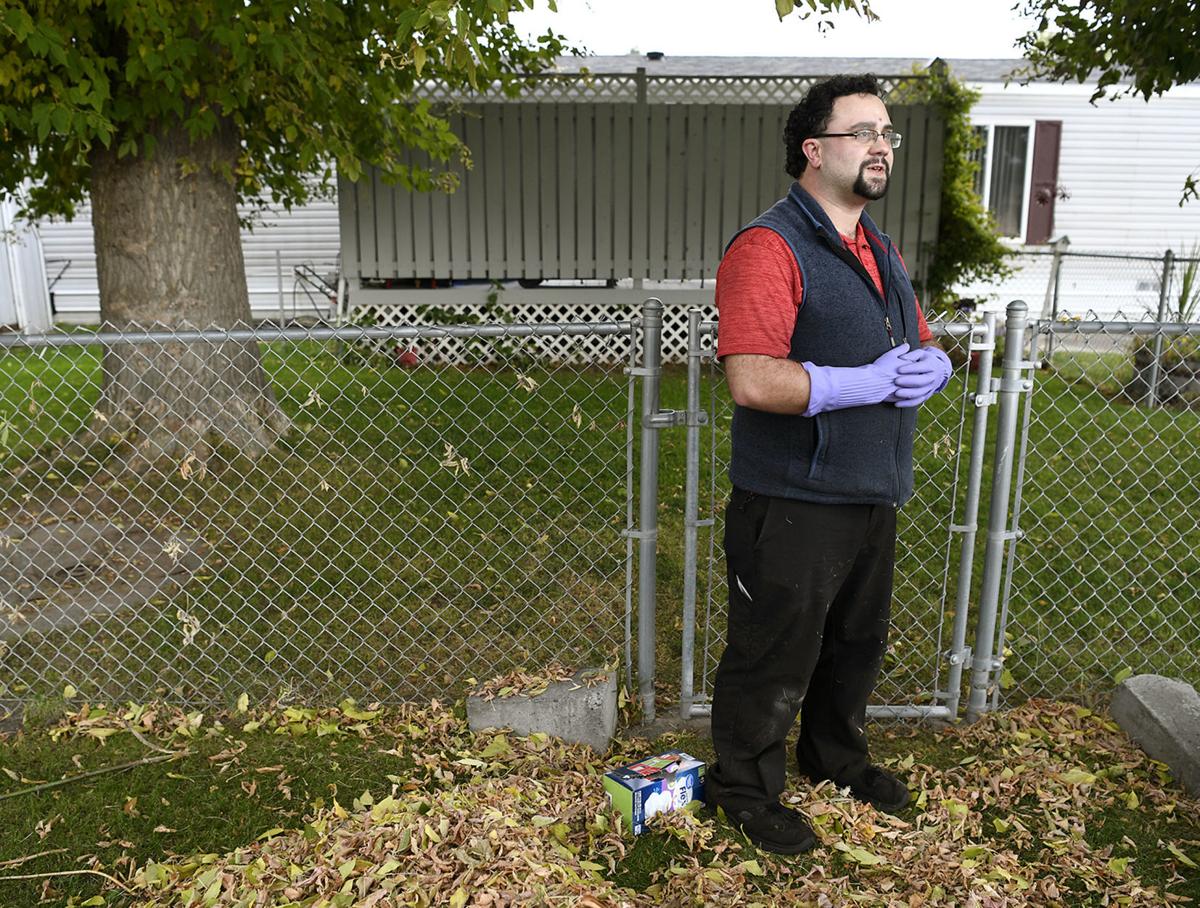 Evan James takes a break from raking leaves at his mother's home in a trailer park off Reserve Street on Tuesday to talk about the rezoning of the property for a new development. "I'm worried she could lose her home," James said. 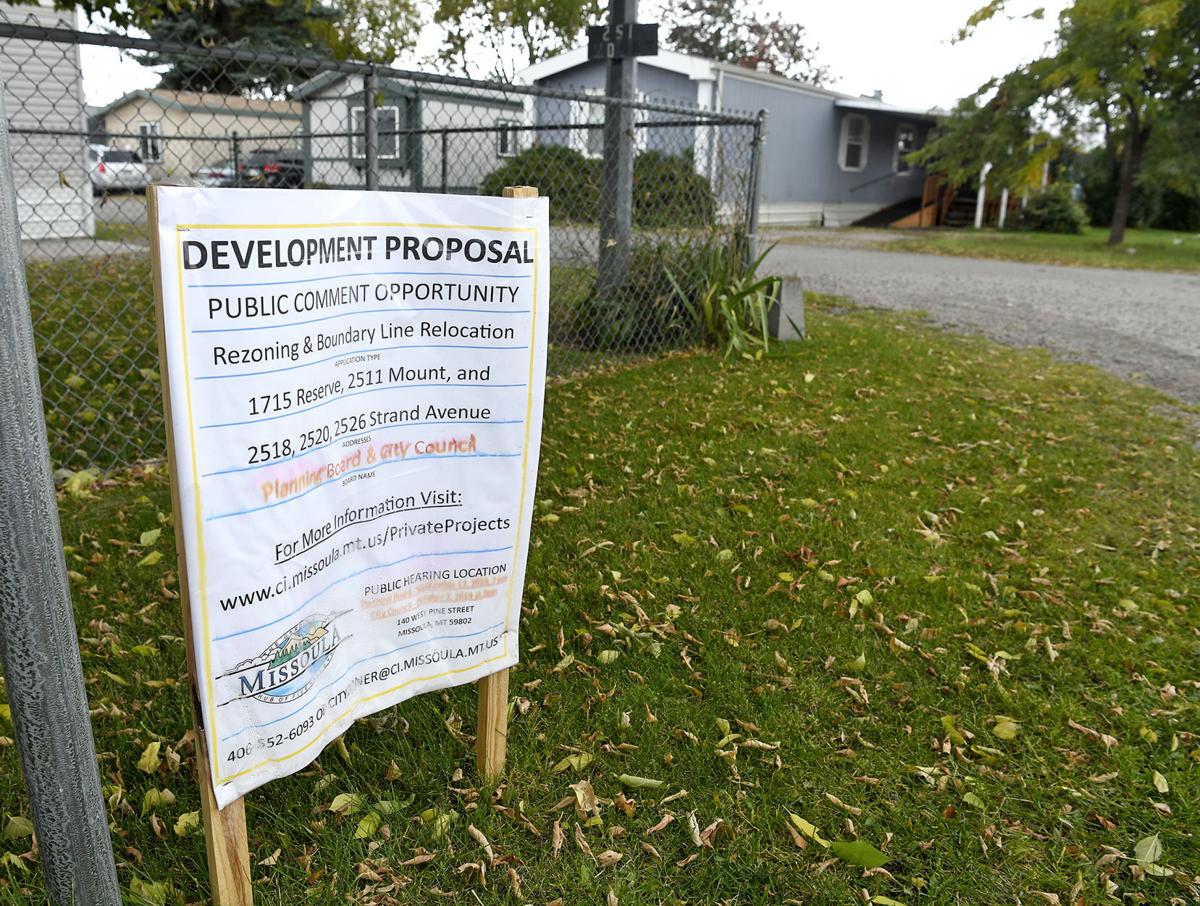 The Missoula City Council approved the property to be rezoned, but residents of the trailer park said they have gotten mixed messages about the property owner's intentions.

City Council unanimously approved a rezone of the property just west of South Reserve Monday night, though council members decried the lack of tools at their disposal to prevent the pattern of low-income eviction.

The 17-unit trailer park, between Mount and Strand just west of South Reserve, is owned and managed by John Brauer. According to development plans presented to City Council, he plans to build a cluster of 20 single-family homes in the vacant field behind the park, and eventually build an apartment building on the lot where the mobile homes now sit.

Evan James cleaned up leaves in his mom’s yard Tuesday — just one of the many tasks he comes by to help her with almost every day. She’s 58 now, but moved into the mobile home in 2005 while James was in high school, the first home she could afford to own as a single mother.

“Yeah it’s a trailer, but it’s a home,” James said. “And it’s her home. She worked so hard to get this place. And now they want to put up condos that are way beyond what she can afford.”

He said he’s heard mixed messages about the property owner’s intentions, as had a handful of other residents who asked not to be named, saying they feared the possibility of retribution. But he said his mother would likely not be able to afford many other housing options in Missoula if she were evicted.

“She wouldn’t be able to have her flowers. How can she do that in an apartment?" he said. “An apartment takes away freedoms for people. It’s a roof overhead, but it’s not your own. This is home ownership.”

Ryan Salisbury, an engineer at WGM Group managing the development, told the council that Brauer plans to build an apartment building and an office on the property currently occupied by the mobile home park, but park residents would have two to three years minimum of notice before the project gets underway. The development on the vacant field would begin in 2020.

But Brauer walked back the proposed development when reached Tuesday, saying he would build the cluster of homes in the vacant field, but doesn’t plan to evict the mobile home park residents. But if he decided to move ahead on development on that lot, the timeline would be “much longer” than the three years Salisbury noted in his presentation to the city.

Michelle Cares, a City Council member representing Ward 6, where the park is, voted in favor of the rezoning despite the discomfort knowing vulnerable people would be more at risk of losing their homes. She said balancing the long-term need to increase housing stock in Missoula and managing what types of homes get built is tricky.

“We are building new housing, but we’re not replacing this type of super-accessible affordable housing and that, frankly, sucks,” Cares said. “Unfortunately there are no tools right now for City Council to address that in a case like this, besides telling residents, ‘Here is a three-year waiting list for housing vouchers.’”

She said because what council voted on was a change to zoning, they were not able to set more specific conditions on how the property can be used outside of what is in the zoning code, as it could in a subdivision process for example. She said the council also needed to respect the lawful rights of private property owners to do what they want.

Brauer said he valued the relationship he has with the trailer park residents, some of whom he said have lived there for 30 years, and did not want it damaged by an eviction.

When questioned why he would spend the money to have developers design general mock-ups for an apartment building if he doesn’t intend to build it, he said doing all of the rezoning and planning for both parcels at the same time was more efficient than doing one now and one in the future.

“It makes a lot of sense to procure these entitlements when you can in Missoula, because of the difficulty of the process. That’s what this is more about; having the option should situations change down the road,” Brauer said. “It’s not about changing the zoning so we can kick all these poor people out of their homes.”

More than 200 new affordable housing units are coming to Missoula and will be available to those who make far less than the median income.

The eviction deadline for the residents of more than 30 trailers in Missoula’s Skyview Trailer Park is coming up on Monday, but dozens of peop…

POLSON — Officials in western Montana are investigating a suspected homicide at a residence east of Ronan.

Power went out across all of Lake County Wednesday afternoon, according to Sheriff Don Bell.

The project would include a 75-spot underground parking garage, with 25% of units slated for rentals.

Evan James takes a break from raking leaves at his mother's home in a trailer park off Reserve Street on Tuesday to talk about the rezoning of the property for a new development. "I'm worried she could lose her home," James said.

The Missoula City Council approved the property to be rezoned, but residents of the trailer park said they have gotten mixed messages about the property owner's intentions.