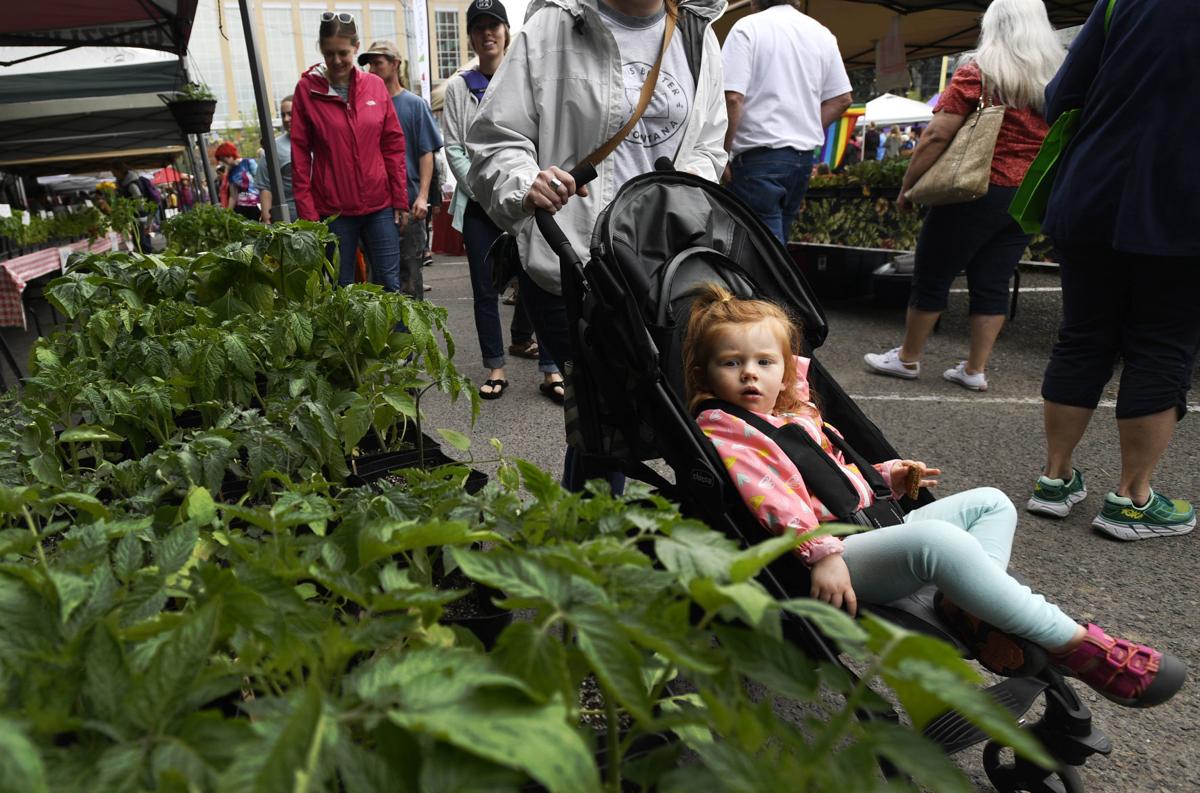 Emery Davis, 2, scopes out some fresh basil on the first day of the Clark Fork Market in May of 2017. 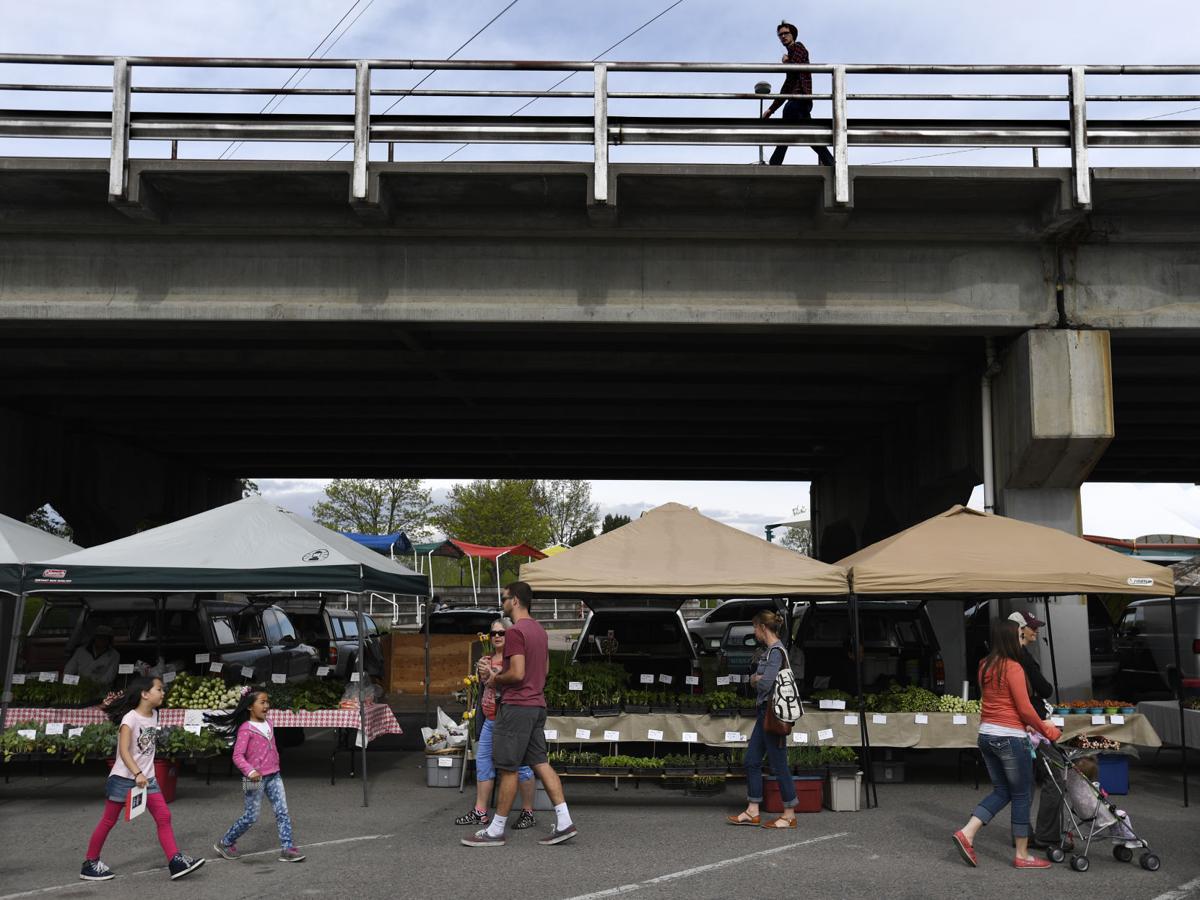 Patrons of the markets could choose from hundreds of vendors within walking distance of each other downtown. The Mountain Line Saturday Market Trolley also runs every 20 minutes for a quicker mode of transportation.

Emery Davis, 2, scopes out some fresh basil on the first day of the Clark Fork Market in May of 2017.

Patrons of the markets could choose from hundreds of vendors within walking distance of each other downtown. The Mountain Line Saturday Market Trolley also runs every 20 minutes for a quicker mode of transportation.

The first week of May in Missoula always brings much needed sunlight, newly blooming plants and the first Clark Fork Market of the season.

But this year — among the usual rows of organic vegetables, jars of honey and tulips — stood a man dressed in gold, never before seen at the bustling farmer's market.

Charlie Mylie, known to his street fans as "Pop-up Charlie," made his Clark Fork Market debut Saturday morning with nothing more than a few black pens and an old set of water color paints, a stack of 4-inch-by-6-inch cards, two cardboard boxes Mylie used as a sort of makeshift drafting table, and a promise that he could "draw anything.''

Mylie, originally from Missouri, said he made the decision to go on a big adventure when he turned 30 in November. He is touring all 50 states with no means of transportation — he mostly hitchhikes — and collecting only tips from his drawings.

Mylie said he's a month into the tour and he's already been to 10 states.

"Its a great way to meet new people," Mylie said. "People talk to me and we learn about each other through my drawings."

Just then, 11-year-old Levi English approached the drawing table with an unusual question.

"Could you draw a super strong-looking lion standing on an otter and a donkey?" English asked.

Mylie laughed and paused for a moment with pen in hand before quickly getting started. Mylie asked English where he came up with such a strange idea, and English said two girls in his class decided their favorite animals were otters and donkeys. When English said his favorite was a lion, they all got in an argument about which animals were better.

English said he planned to bring his drawing to class as visual proof of the lion's superiority.

In little more than five minutes, English had his dream drawing and Mylie had a $10 tip. And the line for "Pop-Up Charlie's" first, and probably last, performance at the Clark Fork Market had grown significantly.

While he drew, others cooked, played music and grocery shopped. The line was long at Ninja Mike's, as always, and the smell of fried food filled the air surrounding Caras Park, where dozens were also preparing for the 25th Annual Garden City Brewfest to be held later in the afternoon.

Children played in the grass beside the farmer's market and disallowed dogs wandered and sniffed the air. Not one, but three jugglers performed with very little room for error.

While there were many vendors selling what seemed to be endless produce, their lines weren't terribly long. People seemed more interested in cooked food, flowers and coffee. But the famous asparagus at County Rail Farm's booth had sold out by 9 a.m., according to farming apprentice Allegra Barnes.

Barnes said the asparagus comes from a 20-year-old asparagus patch on the farm's old location in Dixon, a small town about 40 miles north of Missoula. The farm, which Barnes said has been selling at the farmer's market for about six years, recently moved to a new location in Huson, which is about 20 miles to Missoula's west.

"I had people actually tell me they dreamed of our asparagus," Barnes said, just as a customer came up to ask if she had any left. He disappointedly bought something else when Barnes told him they'd be out until next Saturday.

Barnes said she and her boss usually make enough at the market and through sales to the Western Montana Grower's Co-op. After all, she said, "We don't have to pay for food."

One tent that won't be seen again until the first market of next season was Missoula in Motion's helmet sale, funded by St. Patrick Hospital's Trauma Services, where Bicycle Pedestrian Coordinator Ben Weiss and Program Specialist Katherine Auge were selling helmets for $8.

Auge and Weiss said they usually only attend the first market because people first start riding their bikes in spring, and they'll need helmets for the entire summer season. Auge said they'd sold 42 helmets by 11 a.m.

Melanie Gardner and her son, Jiah Turner, were also selling unique products from their "Tiny Farm" in Arlee.

Gardner said because her farm lacks a greenhouse, it's been a slow, chilly year so far for her actual produce, which usually consists of vegetables, garlic, strawberries and raspberries. So she and her son came at 7 a.m. Saturday packed with hand-spun wool from the farm's sheep and goats, which is dyed naturally with the farm's onions and roots. The team also brought goat milk soap, eggs and other naturally made cosmetics.

Gardner said the first market of the season is always a busy one, especially with this year's warm weather and lack of expected rain.

"It's been great," Garnder said. "There is a lot of support for small farms around here."