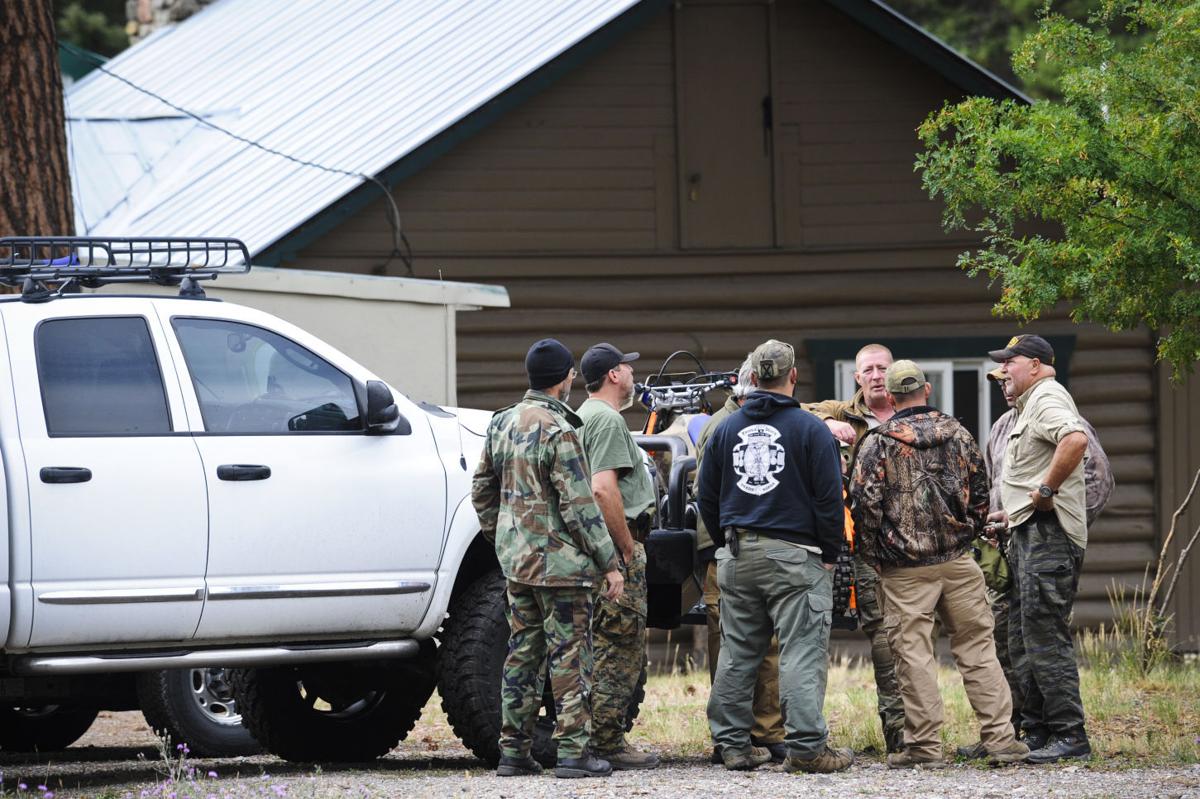 Self-described constitutional rights activists confer just off Main Street in Lincoln in this file photo from 2015. According to retired U.S. Army Sgt. Maj. Jospeh Santoro, the Oath Keepers and other groups are protecting the rights of White Hope Mine claimants George Kornec and Phill Nappo. 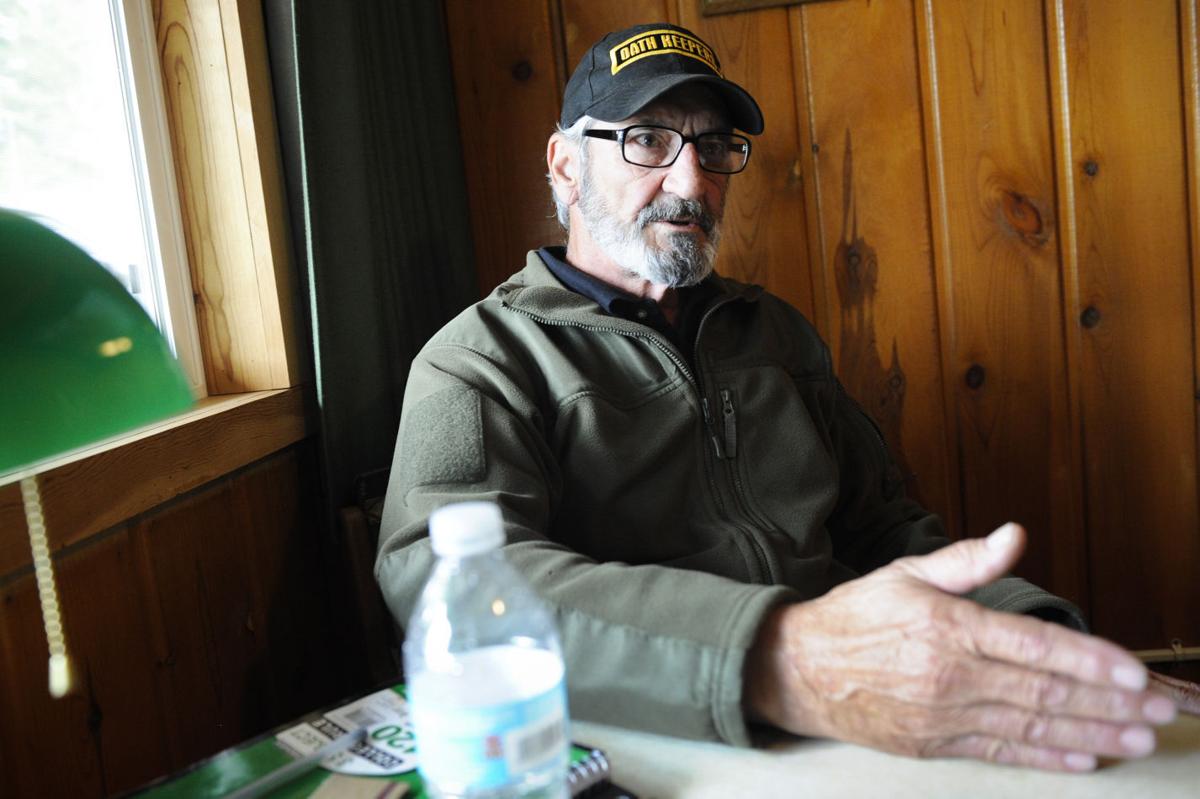 Retired U.S. Army Sgt. Maj. Joseph Santoro discusses the situation at the White Hope Mine while sitting in the Three Bears Motel in Lincoln on Monday.

HELENA – Armed groups describing themselves as constitutional advocates are in Lincoln to try to stop what they call harassment and unlawful action by the U.S. Forest Service concerning mining on a federal claim.

Oath Keepers, a national group best known as among the supporters of Nevada rancher Cliven Bundy during a 2014 grazing dispute with the Bureau of Land Management, initiated a “security operation” and national call for personnel at the White Hope Mine east of Lincoln on Tuesday. Oath Keepers are joined by Pacific Patriot Network and Idaho III%, deriving its name from the 3 percent of Americans who fought in the Revolutionary War.

Members of the groups, many of them wearing camouflage and openly carrying firearms, came to Lincoln on Monday to begin the security operation. They came from Montana, but also Oregon, Utah, Idaho and Colorado.

The groups say the mining claim held by George Kornec predates 1955 regulations that granted surface rights to the Forest Service. The claim thus falls under the 1872 mining law, granting both surface and subsurface rights to Kornec, they say.

The Forest Service, the groups said in a news release, has been unlawfully demanding operating plans under the 1955 law, and not allowed the miners to operate for two years.

“Our position is to protect the rights of these miners thru a open dialogue with the USFS and reach a Legal & Constitutional conclusion,” the news release states.

“We come because they have asked us: ‘Can you come and help us, because we have no other place to turn,’” said retired U.S. Army Sgt. Maj. Joseph Santoro in an interview at his hotel room in Lincoln on Wednesday.

“We aren’t a ‘militia,’” he said. “We are a nonpartisan group of veterans, whether they be in armed services, law enforcement, firefighters, EMTs or concerned American patriots. We have banded together to make sure that people like George and Phil ... are not run over by our government agencies that believe they have the right to do that.”

“We work with any militia group that is willing to work with us, and what we do is to ensure they’re not crazies,” he said. “Because we know there are some folks like that in the militia groups that just want to pull the trigger on somebody, we vet them, make sure we don’t get felons or people that just want to shoot a policeman or authority figure.”

The Oath Keepers’ sole rule of engagement is that they will not fire unless fired upon, he said.

In documents obtained through the Freedom of Information Act, the Forest Service found compliance issues at the mine and ordered Kornec and Intermountain Mining LLC co-owner Phil Nappo to remedy them. Specifically, a shed was built on-site without authorization, explosives were stored, firewood was cut and they needed an approved operation plan for surface disturbance. Two submitted operation plans were rejected by the Forest Service and the miners have not held an approved plan since 2014.

In 1986, the BLM found that Kornec, whose family has held claims since the 1920s, in effect abandoned his claim when he missed a filing deadline, documents state. The deadline was Dec. 30 and the envelope was postmarked Dec. 31.

The abandonment meant that Kornec had to file new paperwork, making the claim regulated under the 1955 laws.

“We have to go with that decision because of that break in time,” said Bill Avey, Helena and Lewis and Clark national forests supervisor. “The bottom line is, we have been working, have a long tradition of working with and we want to continue to work with Mr. Kornec and Mr. Nappo.”

As recently as July 30, Kornec and Nappo met with Forest Service officials in Lincoln to discuss developing an approvable operating plan, Avey said. Nappo agreed at the time that the plan needed to be rewritten, and that better communication was needed between the miners and the Forest Service in the future, he said.

“So why they have these other people up there is a mystery to us,” Avey said. “At this point, we still believe based on this meeting and what they indicated to us on July 30 they were going to submit a new plan and make this work, and that’s where we want to go.”

The goal of the Forest Service is to get the mine in compliance so that operations can resume, he said. The Forest Service never threatened to tear down the shed or remove the miners from the site, as any noncompliance violation is considered civil, he added.

The White Hope Mine sits nestled behind the Mike Horse Mine tailings impoundment, which is currently a major reclamation site administered by the Montana Department of Environmental Quality with contractor Helena Sand and Gravel. The area is closed to vehicle traffic, but Kornec retains access to his claim.

DEQ reported some safety concerns with others driving through the project area Monday, but has made an arrangement for them to use a road only before and after construction operations, said DEQ communications director Kristi Ponozzo.

Santoro agreed that DEQ had a legitimate safety concern with heavy truck traffic and that they had agreed only to access the mine when trucks are not operating.

According to documents, on Aug. 4 Avey and Lincoln District Ranger Michael Stansberry instructed forest personnel to not enter the project area.

A day in court for Kornec and Nappo is why the Oath Keepers and others came to Montana, Santoro said. The situation is similar to one last year at the Sugar Pine Mining Claim in Oregon, where supporters of the miners in a dispute with BLM left after a judge issued a stay in the case, he said.

Other operations include standing guard over storefronts during conflicts in Ferguson, Missouri, and more recently at military recruitment centers, he said.

The groups mobilized Saturday after receiving word of the situation in Lincoln. It was not easy, as many people had to leave jobs and loved ones, Santoro said.

The presence of armed men wearing camouflage in the streets of Lincoln has trigged multiple phone calls to the Lewis and Clark County Sheriff’s Office, Sheriff Leo Dutton said.

“My main concern is public safety and the safety of the citizens of Lincoln,” he said.

There is no law about being dressed in camo or openly carrying a firearm, he said, and the sheriff’s office will only get involved if laws are broken. Dutton said he understands the groups have good control over their membership, but he does have concerns about other “fringe” groups that tend to follow them.

Dutton said he has been in contact with Nappo, and that they have a “great relationship.” Dutton told Nappo about the concerns of some Lincoln residents, and that he wants to see the situation resolved.

Santoro said he understands the concerns of residents in Lincoln and the groups are trying to be responsive.

“Because it’s a small town, they’re very concerned with seeing us in our camies and carrying around guns open carry,” he said. “These people make hay six months per year, so we are doing everything we can to support them with our money and patronage and their wishes.”

Huckleberries to the new parking meters coming to downtown Missoula. The old "vintage" meters are set to be replaced by new meters that use so…

We’re going into another session of gun control here in the U.S. It is with good reason, too. The senseless nature of this round of violence i…

HELENA (AP) – Two Montana miners are denying claims that their mine northwest of Helena fails to comply with U.S. Forest Service regulations.

HELENA – Two Montana miners filed a countersuit seeking a jury trial to determine their rights to claims near Lincoln after the U.S. governmen…

Parrot tailings: EPA resists calls to remove mine waste in center of Butte

BILLINGS – The U.S. Forest Service is considering a more stringent analysis of a mining proposal near Yellowstone National Park after receivin…

Reclamation work on old mine sites in the Kennedy Creek drainage north of Huson should start next week.

HELENA - Lincoln-area miner George Kornec, who last year enlisted the help of constitutional advocates in a dispute with the U.S. Forest Servi…

Self-described constitutional rights activists confer just off Main Street in Lincoln in this file photo from 2015. According to retired U.S. Army Sgt. Maj. Jospeh Santoro, the Oath Keepers and other groups are protecting the rights of White Hope Mine claimants George Kornec and Phill Nappo.

Retired U.S. Army Sgt. Maj. Joseph Santoro discusses the situation at the White Hope Mine while sitting in the Three Bears Motel in Lincoln on Monday.