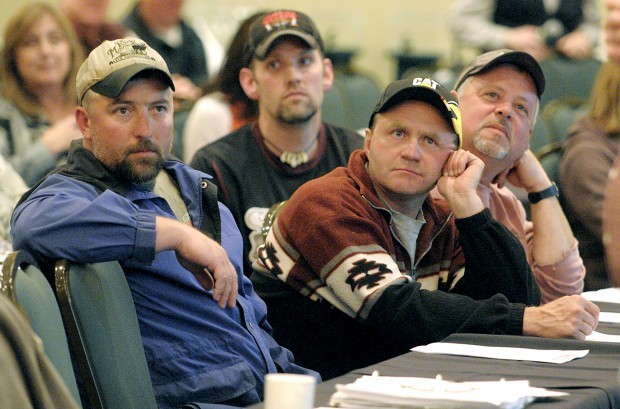 Sean Davis, Glenn Broughton and Joe Cardin, from left, listen to comments during a public meeting put on by Montana Fish, Wildlife and Parks in Missoula on Wednesday to talk about this year’s wolf hunt. Photo by TOM BAUER/Missoulian 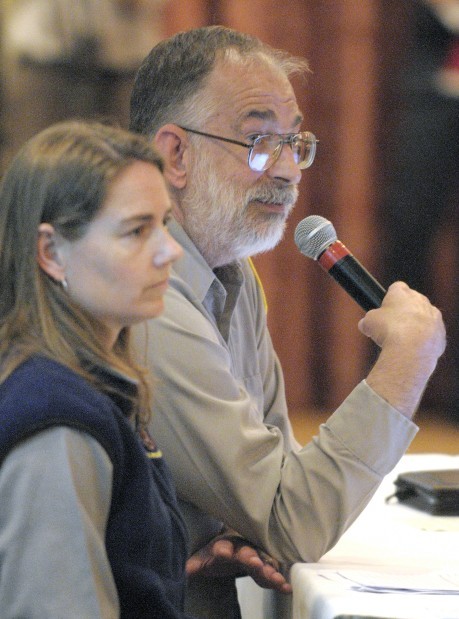 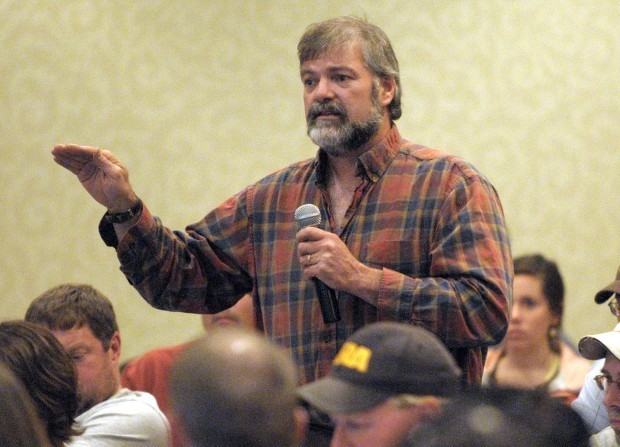 Shawn Andres, who has a taxidermy shop near Arlee, comments during the meeting on Wednesday. Andres said he’s seen fewer big game animals brought into his shop as wolves have increased in numbers. Photo by TOM BAUER/Missoulian
By ROB CHANEY of the Missoulian

State wildlife managers want a little more time to get control of Montana's wolf population, but many hunters believe time has already run out.

"Wolves are a native species, and they have a place on the landscape," Montana Fish, Wildlife and Parks Region 2 Director Mack Long told about 100 people at a public meeting Tuesday evening. "But they don't have an unlimited place on the landscape. This is the hardest thing I've ever had to deal with in my career. Fish, Wildlife and Parks is trying to find the balance."

For many in the audience, the balance was unfairly tipped years ago when wolves were reintroduced in and around Yellowstone National Park. Florence resident Eric Ralshoven said he'd seen his favorite hunting areas devastated by wolf predation. He asked how the original 1995 plan of about 300 wolves and 30 breeding pairs in a three-state area had become 560 wolves and 37 breeding pairs in Montana alone.

"I'm a 50-year resident of this state," Ralshoven said. "Our hunting heritage has been stolen by these people who lied to us."

FWP Commissioner Bob Ream responded that 60 percent of Montana's wolves came here naturally from Canada and were not part of that Yellowstone reintroduction population.

"It's true we've gone way past that recovery goal," Ream said. "But it wasn't that you were lied to. We've been held up (on getting state control of wolves)."

Gray wolves came under federal Endangered Species Act protection in 1974. They started migrating down from Canada in the 1980s, and reached as far south as Ninemile and Avon by the mid-'90s. After the reintroduction effort in 1995 and 1996, wolves reached their population recovery goal for Montana, Idaho and Wyoming in 2002, according to FWP wolf biologist Liz Bradley.

The U.S. Fish and Wildlife Service then started legal efforts to delist the wolf and turn management over to those states. That nearly happened in 2008, but U.S. District Judge Don Molloy blocked the move because Wyoming failed to produce an acceptable wolf management plan. In 2009, Molloy allowed Montana and Idaho to take over wolf control and hunting, but is still considering whether the federal government properly delisted the predator.

Wolf advocates have argued in court that the population needs to be more than 2,000 animals to ensure genetic diversity and connectivity. They've asked Molloy to block all wolf hunts until those higher numbers can be reached.

Long said Montana was trying to keep a big-game wolf hunt on the table even if the federal court re-lists the wolf. He said the hope is to use private hunters instead of state and federal livestock agents to control wolf numbers.

That drew fire from Jerry Black, who said that was essentially trying to circumvent the Endangered Species Act.

"If they (wolves) are re-listed, they're re-listed for a reason," Black said. "They (FWP) can't go around looking for loopholes."

The case is due back in court for more debate next week in Missoula. In the meantime, FWP commissioners have drawn up a more aggressive plan for this year's hunt. Last year, they set a quota of 75 wolves for the big-game season.

"Do not confuse what we did last year with population management," FWP wildlife manager Mike Thompson told the audience. That hunt was more to see if hunters could successfully kill wolves, and how the animals would react. With that experience in hand, this year's quota and hunting districts are set up to make a significant dent in the wolf population.

The FWP Commission is considering three quota levels of 216, 186 or 153 wolves for the 2010 season. Instead of three hunting districts, there would be 14. The 10,000-square-mile Region 2 area around Missoula would have three districts.

Thompson said the districts were designed to confront wolves in the places where they've had the most impact on deer and elk herds. The most important covered the Lower Clark Fork River basin around Superior, where elk numbers have shown serious declines. Hunters would be able to take 15 to 22 wolves there, depending on which statewide quota level is chosen.

The Blackfoot watershed northeast of Missoula has seen less wolf damage, and would have a quota between 10 and 15 to kill. A much larger district covering the Bitterroot Valley and Upper Clark Fork drainage would have between 21 and 26 wolves in its quota.

All of those targets are based on a goal of keeping at least 448 wolves and 24 breeding pairs in Montana by the end of the year, Thompson said. That figure also included new wolf pups coming into the population and wolves killed for livestock conflict or other causes as well as hunting.

"We'll have a lot more confidence in our management plan after this season," Thompson said. "That's another reason not to get super-aggressive just yet."

The state Fish, Wildlife and Parks Commission will take public comments on its wolf-management plan through June 14. E-mail comments can be se…

Sean Davis, Glenn Broughton and Joe Cardin, from left, listen to comments during a public meeting put on by Montana Fish, Wildlife and Parks in Missoula on Wednesday to talk about this year’s wolf hunt. Photo by TOM BAUER/Missoulian

Shawn Andres, who has a taxidermy shop near Arlee, comments during the meeting on Wednesday. Andres said he’s seen fewer big game animals brought into his shop as wolves have increased in numbers. Photo by TOM BAUER/Missoulian
© Copyright 2021 Missoulian, 500 S. Higgins Missoula, MT | Terms of Use | Privacy Policy
Powered by BLOX Content Management System from TownNews.com.
You don't have any notifications.