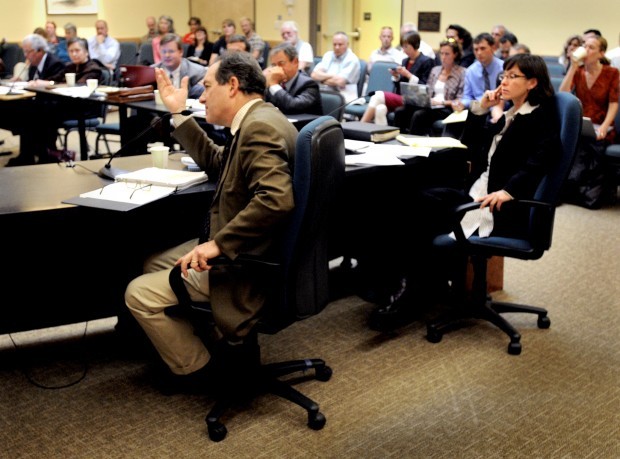 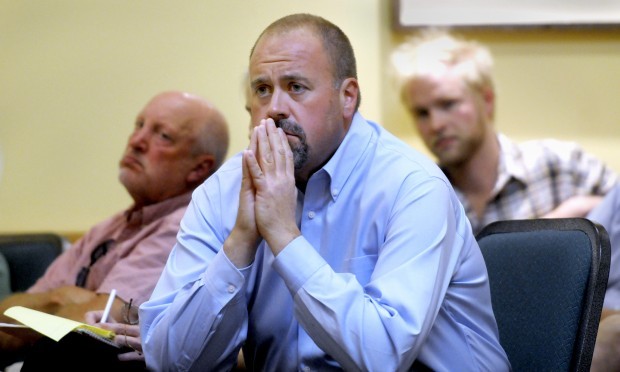 Missoula Mayor John Engen, who supported the sale to the Carlyle Group, listens to testimony during a hearing in September 2011. 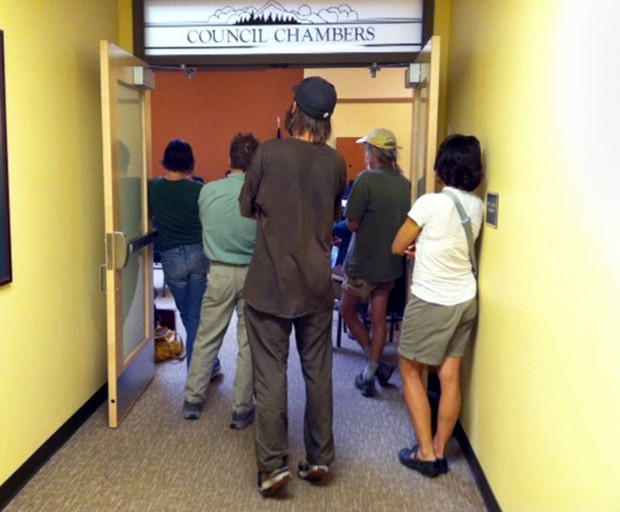 Spectators gather at the door of the Missoula City Council Chambers to listen to the testimony.

Even describing The Carlyle Group as "corporate crooks," a skeptical public told the Montana Public Service Commission on Monday to guard Missoula's water.

"Our water here is a precious resource, and we are a small community," said Teresa Jacobs at a public hearing on the proposed sale of Mountain Water Co. "I don't like the idea of Carlyle Group coming into our community and changing the way that we do business. And if Mountain Water is doing such a good job, and I have been told that they are, then we don't need the expertise of The Carlyle Group. We don't need anything. We have wonderful, pure water."

On Monday afternoon and evening in packed meetings before the PSC, the public weighed in on the proposed sale of Mountain Water parent Park Water Co. to global investment firm The Carlyle Group. One Missoula man called for the city to seize control of Mountain Water by condemnation, and many residents urged public ownership, some raising questions about and some strongly opposing a deal with Carlyle.

"I can't even believe this is on the table," said Corey Rhyne of Missoula. "This is just crazy. It's probably the worst thing the town could consider. If you like water sovereignty, don't hand it over to The Carlyle Group."

Local jobs also are at stake in any transaction, according to employees of Mountain Water. In emotional testimony, several staff praised a corporate culture of community service and said they were anxious about losing their good jobs. Heather Best said she spent her first months, even years, at Mountain Water pinching herself every day about having such a solid job in Missoula with a caring employer.

"I no longer have to work two jobs or more like I did in college. I own a home. I have a family," Best said.

Up until now, Best said she had a workplace she felt secure about and an owner, Henry Wheeler, who cares about his employees. Now, she worries she or some of her colleagues won't have a place in the company's future.

Drew Fetherolf, on the other hand, saw the bright side of the matter before the commission. He figured if multinational firms want to get in on the water business, it must be a good idea. Those executives are no "soft heads," he said.

So the Missoula man said he wants the city of Missoula to beat the Carlyle Group to the punch when it comes to owning Mountain Water Co.

Last week, the city of Missoula signed a letter of agreement with Carlyle and the Clark Fork Coalition that ostensibly puts Missoula in a strong position to buy Mountain Water should Carlyle wish to sell in the future. The letter also aims to protect local water.

On Monday, though, Robbie Liben was one of several people who questioned whether the agreement was legally binding. He described it as "flowery" but without substance, and he asked the PSC to turn down the sale for the good of the community.

Zach Porter said he's skeptical of the sale to Carlyle because its main witness in the sale, Carlyle infrastructure manager Robert Dove, was with Bechtel Corp. when it undertook "a very scandalous operation in the country of Bolivia" that led to unaffordable water rates and outright war.

"I bring that up because it makes me skeptical, and it should make anyone skeptical about the sale to a corporation that will have a difficult time proving it will be a community player," Porter said.

Other members of the public voiced a similar skepticism, and in unusual testimony, Austin Epley read a poem that described Carlyle executives as "corporate crooks." Epley confronted the sea of suits and ties in his dreadlocks and facial piercings.

"We've all become slaves sold to the highest bidder ... we're in a world water crises. ... The world is not yours to be taken," Epley read.

While offering more conventional testimony, Dan O'Neill, also opposed the sale to Carlyle. O'Neill, who owns Belle Creek Landscape, said water is essential for his business, and he doesn't want to have to call Carlyle employees in Bangkok or Amsterdam about water matters in Missoula.

O'Neill, who has a degree in business administration, also said Carlyle is free to exploit the purchase. After earning profits in the short term, it can foist an overvalued utility in need of costly improvements on the city of Missoula.

"This deal reminds me of the term ‘pump and dump,' and our state has witnessed ventures like this in the past," O'Neill said.

Keogh, one founder of the Facebook group "Mountain Water for Missoula, Not the Carlyle Group," said NorthWestern Energy went bankrupt, as did Babcock and Brown, the Australian firm that tried to buy NorthWestern before the PSC unanimously rejected the proposal.

"We've had one disaster after another as large corporations came to Montana interested in acquiring our local utilities," Keogh said.

Keogh, an energy analyst, urged commissioners and their staff to scrutinize the agreement among the city, Carlyle and the Clark Fork Coalition. He said he wants to be sure Mountain Water's assets are protected from "upstream interests" of The Carlyle Group.

"What would happen to Missoula ratepayers if Carlyle Infrastructure were to go bankrupt?" Keogh asked.

That's one question, and Vicki Watson said there are many others the PSC needs to answer as it proceeds. Any change from the status quo must be carefully and openly reviewed.

"For it (a sale) to be in the public interest, I think there needs to be a clear path to public ownership, and a very difficult-to-derail path at that," Watson said.

Despite his undeniable popularity, Mayor John Engen appears to be directly at odds with his constituents in throwing his support to the propos…

How would a global private equity firm improve the company that provides Missoula's drinking water? members of the Montana Public Service Comm…

A look inside the bubble for the 2022 Beijing Olympics

Coast Guard rescues kayaker off the coast of Louisiana

Coast Guard rescues kayaker off the coast of Louisiana

Missoula Mayor John Engen, who supported the sale to the Carlyle Group, listens to testimony during a hearing in September 2011.

Spectators gather at the door of the Missoula City Council Chambers to listen to the testimony.