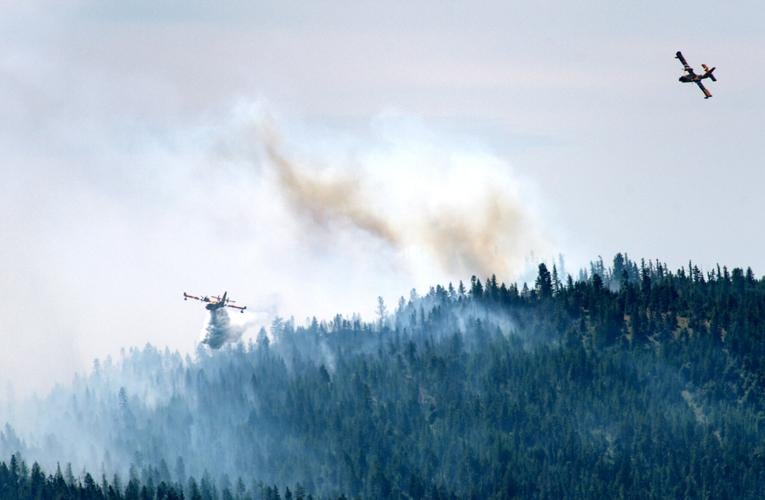 A pair of scooper planes drop water on the edge of the Elmo 2 fire on the mountain ridge directly south of Lake Mary Ronan Thursday. Despite red-flag conditions, firefighters made strong progress protecting homes and restricting the fire's growth. 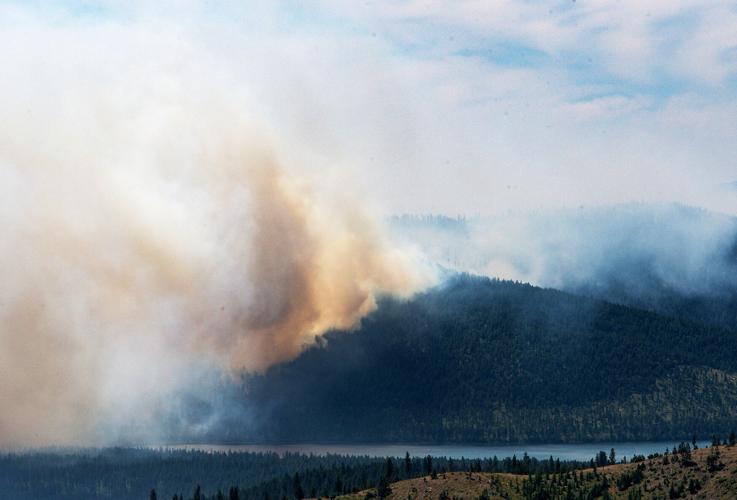 Smoke from the Elmo 2 fire pours into Lake Mary Ronan on Thursday. The Lake County Sheriff gave a mandatory evacuation order for all residences along Lake Mary Ronan Road as the fire exceeded 20,600 acres.

ELMO — The Elmo 2 fire on the west side of Flathead Lake was less active Thursday after multiple days of explosive growth this week.

Strong winds from the southwest, warm temperatures and low humidity — a combination warranting a red-flag warning — created prime conditions for extreme fire behavior on Thursday. But those winds were pushing the northern head of the fire down steep mountainsides toward Lake Mary Ronan. The result was a fire that slowly crept down the mountain as six scooper planes doused it with water and crews reinforced lines below.

“We had an anticipated forecast and the plan associated with it,” said Daniel McKeague, a public information officer with Northern Rockies Team 7, "and at this point in the day, 1630, we’ve been able to work that plan. The fire backed down from the DNRC section and approached Camp Tuffit Road.”

McKeague said at 4:30 p.m. Thursday that the fire had reached the road near its most southern point but had not yet reached the lake shore, though it is slowly backing down the mountainside toward it. The eight structures that burned in the fire were destroyed Monday. Those structures, which included at least four homes, were immediately west of Dayton around the Chief Cliff area. No additional structures are known to have burned since then.

“I do think we’ll see less growth Thursday," he said.

The relatively modest activity Thursday was a stark contrast to the previous day’s blow-up, when fire raced up mountainsides through dense fuels and sent a towering column of smoke into the air above Lake Mary Ronan, Dayton and Lakeside. There was no massive plume Thursday, just a smoky haze from the direction of the burn.

Fire activity was so extreme Wednesday that firefighters had to pull back from the burn at 2 p.m. But crews worked through the night to reinforce a containment line along Camp Tuffit Road, on the southern side of Lake Mary Ronan. That line is so far holding.

The fire Wednesday was "rapidly burning through available fuels and green fuels that were going to send up that column,” McKeague said, noting that water drops from scooper planes have afforded ground crews time to construct more lines around the perimeter.

"Aircraft don’t put the fire out — it’s the people on the ground that do,” he said. "Aircraft are helping slow that progression."

Incident commanders planned to contain the fire on the south side of Camp Tuffit Road, which hugs the southern edge of Lake Mary Ronan.

Lake County Sheriff's Office asked all residents in the area to follow the mandatory evacuation order issued on Tuesday, which includes the entire Lake Mary Ronan Road corridor from U.S. Highway 93 to Lake Mary Ronan and including all areas around the lake.

Fire crews made progress securing the fire line on the western and eastern flanks of the fire. Six scooper planes, three helicopters and two single-engine air tankers (SEATs) led an aerial assault on the northern flank as flames torched trees along the north end of the Hog Heaven Range.

With the increase of fire resources at Elmo 2, the Lake County Sheriff’s Office and the Confederated Salish and Kootenai Tribes issued Stage 1 fire restrictions for their respective jurisdictions. That prohibits building or maintaining a campfire, smoking closer than 3 feet from flammable materials and operating a motor vehicle off of designated roads of trails.

At least four homes have been lost to the Elmo 2 fire on the west side of Flathead Lake near Elmo and Dayton as of Wednesday morning.

Fire dispatch confirmed Tuesday that multiple structures have been lost in the fire, now estimated to be at least 16,000 acres. The flame is threatening the Lake Mary Ronan Corridor and the town of Dayton.

Firefighters at the Elmo 2 fire turned to structure protection Monday night as the fire exploded off of dry fuels and high winds. The fire has…

Wildfires in or near western Montana continued to gradually expand Monday, although some have seen little change in recent days.

A pair of scooper planes drop water on the edge of the Elmo 2 fire on the mountain ridge directly south of Lake Mary Ronan Thursday. Despite red-flag conditions, firefighters made strong progress protecting homes and restricting the fire's growth.

Smoke from the Elmo 2 fire pours into Lake Mary Ronan on Thursday. The Lake County Sheriff gave a mandatory evacuation order for all residences along Lake Mary Ronan Road as the fire exceeded 20,600 acres.