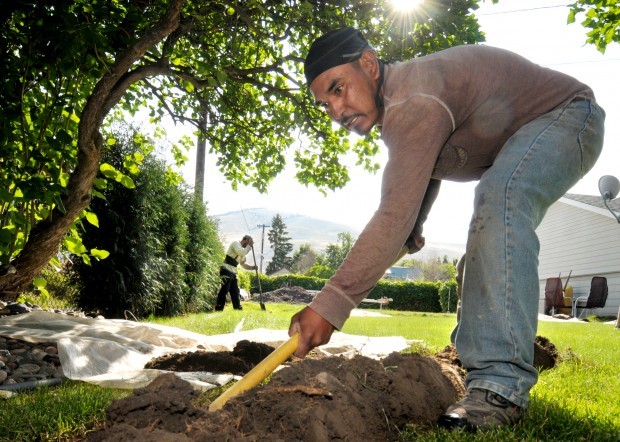 Eduardo Ramirez, right, and Luz Aldaco dig trenches for a new sprinkler system on Benton Avenue in Missoula on Friday morning. The two laborers spent nearly a week on a bus from south-central Mexico so they could work the summer and fall for Ibey Sprinkler, Landscape and Nursery in Missoula. Photo by MICHAEL GALLACHER/Missoulian 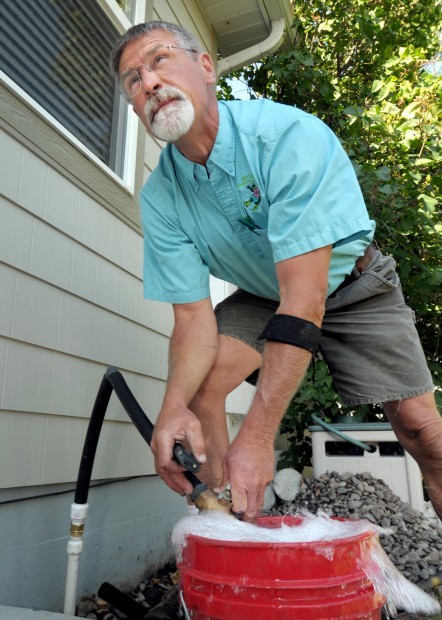 “We were just amazed at how many people didn’t want this work,” says Ibey Nursery owner Tim Ibey. “I guess we kind of got spoiled as a community on higher labor rates with all the building that was going on two and three years ago.” Photo by Michael Gallacher/Missoulian
By JAYME FRASER for the Missoulian

Luz Aldaco and Eduardo Ramirez dug narrow trenches in a Missoula lawn Friday morning, their spades clanging as they hit buried stones in the path of a new irrigation line.

The duo of migrant workers from south-central Mexico are back in Missoula this summer to work at Ibey Sprinkler, Landscape and Nursery after becoming regulars on the company’s peak-season crew in recent years.

They are among 574 temporary foreign laborers working for non-agricultural Montana businesses during the 2009-10 fiscal year, a number that decreased by two-thirds after five years of growth.

In fact, fiscal year 2008-09 saw an all-time high of 1,707 non-agricultural foreign laborers on the job in Montana. The shift was revealed in U.S. Department of Labor statistics on H2B visas, released by the Office of Foreign Labor Certification each July.

Economists at the University of Montana and Center for the Rocky Mountain West provided the explanation.

“With unemployment levels and wages rising in our state and region more recently, these employers have been more able to find workers locally,” regional economist Larry Swanson said.

The shift from foreign to local labor in seasonal industries is one factor that’s kept Montana’s unemployment rates lower than the national average, Swanson said, along with the fact that the state started the recession with fewer unemployed workers.

Tim Ibey, who employs Aldaco, 29, and Ramirez, 34, said he’s hired as many 20 migrant workers when unemployment rates were below 2 percent.

The shift away from foreign labor also could be caused by the recession’s hit to tourism and travel, said Patrick Barkey, director of the University of Montana’s Bureau of Business and Economic Research.

“This seems entirely consistent with the sharp contraction in the accommodations and food industries in Montana,” Barkey said.

Businesses must apply to hire foreign workers; state and federal Department of Labor officials evaluate the regional economy and must see proof that the companies advertised locally before looking out-of-country.

Nearly 50 Montana businesses applied for foreign laborers this fiscal year; 35 were certified to hire at least some of the temporary workers requested.

But the sudden growth in available local workers hasn’t completely solved the labor challenges that encourage some businesses to seek foreign employees.

The same reasons that encouraged Ibey to research migrant workers six years ago continue to challenge his business, albeit to a smaller degree. He once hired four times as many employees as he actually needed to guarantee a full 40-person crew each summer.

“We started looking at our labor costs and why it was so high,” Ibey said. “The reason it was so high wasn’t because we were paying our guys so much. We had to have four or five extra guys on staff to just have enough crews.”

Turnover was high, as some employees found better pay in construction, sought less strenuous work or took vacation without notice. Swanson said unemployment rates below 2 percent in some regions of the state meant less competition for more desirable jobs.

Digging dirt and rocks or cutting large lawns during the summer is tough work, but Ibey said he couldn’t raise wages significantly. No one would pay $90 to have their lawn mowed, he laughed.

Something had to give.

“Any business will tell you training and putting people on is one of your biggest labor costs,” Ibey said.

Still, he’s surprised at how difficult it is to maintain a local crew during the recession.

“We were just amazed at how many people didn’t want this work,” he said. “I guess we kind of got spoiled as a community on higher labor rates with all the building that was going on two and three years ago.”

Swanson, too, noted that the previous construction boom raised wages for unskilled workers in that industry. Ibey, however, said he can’t reasonably meet the expectations of those displaced workers.

“Guys that weren’t really carpenters were making $18 an hour and now they need a job – but not bad enough to take one at $8 an hour to start,” Ibey said. “It’s not that I don’t want to hire local. I would love to be able to hire local.”

On Friday, Ibey worked with Ramirez to test a new sprinkling system at a Missoula home.

Ramirez and Aldaco rode a bus from south-central Mexico to work in Missoula the past several summers. Ramirez – who speaks good but halting English – said he works strawberry, onion and cornfields when he returns home to his wife and three kids.

“Besides one guy in the nursery, I think he’s our most senior guy,” Ibey said.

Ramirez and Aldaco are part of a familiar crew that travels to Missoula for the annual work, respectively earning $10.50 and $9.50 an hour.

“These are my sprinkler guys,” said Ibey, then pointed to Ramirez. “He’s my, what do you call it?”

“My precision irrigation guy,” Ibey finished with a chuckle. “I can lay out a system and they’ll just go to work.”

Because they need so little direction – after all, it’s not their first summer greening Missoula lawns – Ibey left them alone Friday to run some equipment to a different crew.

Ramirez and Aldaco pulled a black plastic tube through the lawn with the Ditch Witch, then began digging long, narrow holes where the sprinkler heads were later buried.

Ibey said their wages are within the $9-to-$12 range he would pay other workers with similar installation experience.

“We give everybody raises as they come up, but generally we don’t have guys that stick with us for five years,” Ibey said. “They’re great guys to work with.”

Ramirez kept working as he laughed at all the unusual attention, his spade biting against a buried rock.

He hopes to return next year and any year Ibey needs the help.

And it’s a likely bet for Ramirez, since Swanson said the state will likely see a resurgence in the number of foreign laborers when Montana’s economy lumbers out of the recession.

Jayme Fraser is a junior studying print journalism at the University of Montana who is interning at the Missoulian this summer. She can be reached at 523-5241 or at jayme.fraser@missoulian.com.

Eduardo Ramirez, right, and Luz Aldaco dig trenches for a new sprinkler system on Benton Avenue in Missoula on Friday morning. The two laborers spent nearly a week on a bus from south-central Mexico so they could work the summer and fall for Ibey Sprinkler, Landscape and Nursery in Missoula. Photo by MICHAEL GALLACHER/Missoulian

“We were just amazed at how many people didn’t want this work,” says Ibey Nursery owner Tim Ibey. “I guess we kind of got spoiled as a community on higher labor rates with all the building that was going on two and three years ago.” Photo by Michael Gallacher/Missoulian
© Copyright 2021 Missoulian, 500 S. Higgins Missoula, MT | Terms of Use | Privacy Policy
Powered by BLOX Content Management System from TownNews.com.
You don't have any notifications.