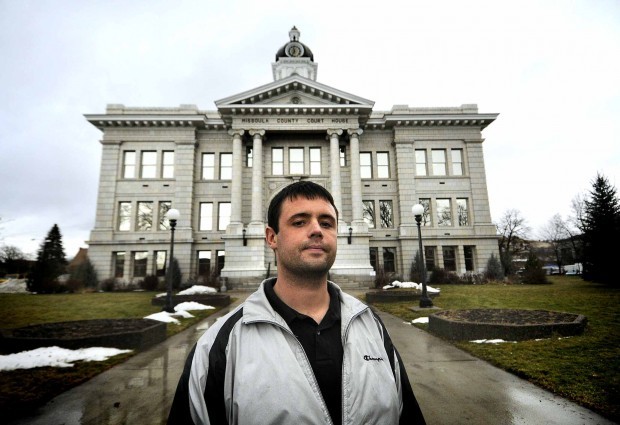 Cody Marble stands outside the Missoula County Courthouse on Tuesday morning. Marble is filing a petition to overturn a 2002 rape conviction after the alleged victim recently recanted the accusation and testimony. “I just want my life back. I want my life back from parole, from sex offender registration, from this accusation,” says Marble. Photo by LINDA THOMPSON/Missoulian 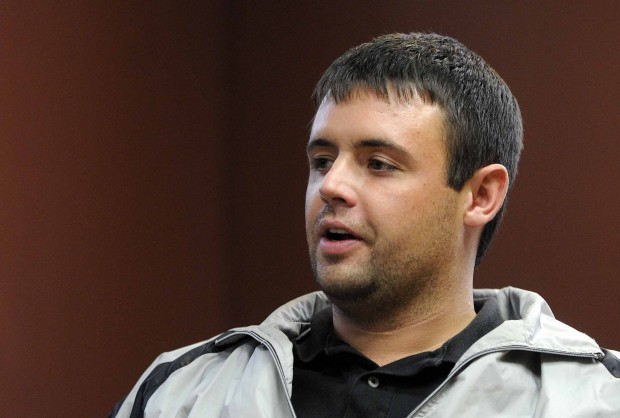 Currently on parole, Cody Marble was sentenced to 20 years in prison after a fellow inmate at the Missoula County Juvenile Detention Facility accused him of rape. Photo by LINDA THOMPSON/Missoulian

Cody Marble stands outside the Missoula County Courthouse on Tuesday morning. Marble is filing a petition to overturn a 2002 rape conviction after the alleged victim recently recanted the accusation and testimony. “I just want my life back. I want my life back from parole, from sex offender registration, from this accusation,” says Marble. Photo by LINDA THOMPSON/Missoulian

Currently on parole, Cody Marble was sentenced to 20 years in prison after a fellow inmate at the Missoula County Juvenile Detention Facility accused him of rape. Photo by LINDA THOMPSON/Missoulian

A Missoula man who has long proclaimed his innocence in a jailhouse rape case filed dramatic new evidence Tuesday with his latest petition to overturn his conviction: a signed statement from the alleged victim, saying the rape never happened.

Cody Marble, 26, convicted of rape eight years ago, said he hopes his latest challenge of that conviction will finally be the one that clears his name.

"I'm just glad it's finally happening," he said of the petition, which has been in the works for more than a year. "I just want my life back. I want my life back from parole, from sex-offender registration, from this accusation."

Marble was paroled from the Montana State Prison this summer and lives with his father in Missoula.

A District Court jury convicted Marble in November 2002 of raping a 13-year-old fellow prisoner at the Missoula County Juvenile Detention Facility earlier that year. He was sentenced to 20 years in prison.

In a statement filed Tuesday with Marble's petition, the alleged victim, now 22, says he was not raped by Marble and that he was told by other teenage prisoners in the detention center to make up the story to frame Marble for the crime.

"I testified falsely against Cody Marble at the trial," he said in his signed statement. "I thought by then that the story had gone too far and I could not go back. I never thought he would be found guilty or go to prison. ... My hope now is to set the record straight."

The 22-year-old man is an inmate at the Montana State Prison, serving a sentence for having sex with an underage girl. He could not be reached for comment Tuesday.

Marble's petition, filed in state District Court at Missoula, asks the court to hold a hearing on the new evidence and either set aside Marble's conviction or schedule a new trial.

"It's just one more thing that Cody Marble is trying to do to avoid responsibility for his case," Van Valkenburg said. "We're just going to have to deal with it."

The statement by Marble's accuser was obtained in July with the help of the Montana Innocence Project, a Missoula-based nonprofit group that investigates cases of possible wrongful convictions.

Marble's case is the first one involving the Montana Innocence Project that has led to formal filing of court documents seeking to overturn a conviction.

"Our investigation yielded information that supports his innocence and raised more questions, and we turned that over (to Marble's attorney)," said Jessie McQuillan, executive director of the Montana Innocence Project. "The centerpiece of the petition is that the alleged victim has recanted. He says what many people suspected: That the rape never took place."

McQuillan said the Innocence Project got involved about 18 months ago, in the wake of questions raised about Marble's conviction by those familiar with the case and by news coverage of his efforts to overturn it.

The Missoulian published a lengthy story in May 2008 about Marble's case, including questions raised by witnesses and sex-offender counselors who had examined him and doubted his guilt.

Innocence Project staffers and lawyers learned that the alleged victim was ready to denounce his trial testimony, and visited him at the state prison in Deer Lodge 11 months ago, McQuillan said.

"He told us it was time to recant and we got the signed statement in July, at a subsequent visit with him," she said.

The petition filed Tuesday also contains other evidence and statements that Marble said supports his case for exoneration.

Missoula sex-offender counselors Michael Scolatti and Roger Dowty, who have examined or treated Marble since his conviction and earlier expressed doubts that he was guilty, said the recantation from the alleged victim rings true and strengthens their belief that Marble is likely innocent.

A prisoner at the Missoula County Juvenile Detention Facility when Marble and the alleged victim were there also filed a statement that said a "culture of set-ups" existed in the center in 2002, and that Marble had repeatedly been mentioned as a possible victim of a sexual-assault set-up.

Those concocting the set-up thought it would somehow endear them to prosecutors and help them get their own sentences or charges reduced, the prisoner said.

The prisoner, who's incarcerated somewhere else in the state now, was not identified in the petition, and asked that his full statement be sealed from public view and revealed only to the court and lawyers for the state.

Marble has filed at least a half-dozen petitions to appeal or overturn his conviction, but so far every one has been rejected by either state or federal courts.

Marble said Tuesday he's still outraged over what happened to him, and "not for one second" thought about giving up the fight to overturn his conviction.

Marble's father, Jerry Marble, also said he's spent "everything I had" on investigators, lawyers and other expenses to try to exonerate his son.

Cody Marble had been in and out of juvenile facilities on various drug charges as a teenager, but had never been convicted of a violent crime or felony before the rape charge in 2002.

He must register as a sex offender and says that's made it difficult to find a job. He works now as a lot attendant at a local boat and recreational vehicle company.

"When you have to write down that you're a registered sex offender, I think they just throw (your job application) in the trash," Marble said. "It's kind of like prison outside of prison. ...

"I didn't think this could happen in America. I feel like the system has failed me."

Missoulian State Bureau reporter Mike Dennison can be reached at 1-800-525-4920 or at mike.dennison@lee.net.

HELENA - A Missoula man trying to overturn his 2002 rape conviction "has no evidence," because the victim who recanted his original testimony …

HELENA - In the latest development in a long-running case of a Missoula man trying to overturn his 2002 jailhouse rape conviction, a state jud…

Witness recants evidence that would exonerate Missoula man of rape

The Innocence Project-assisted efforts of a Missoula man to overturn his 2002 rape conviction should be rejected, prosecutors said Wednesday, …