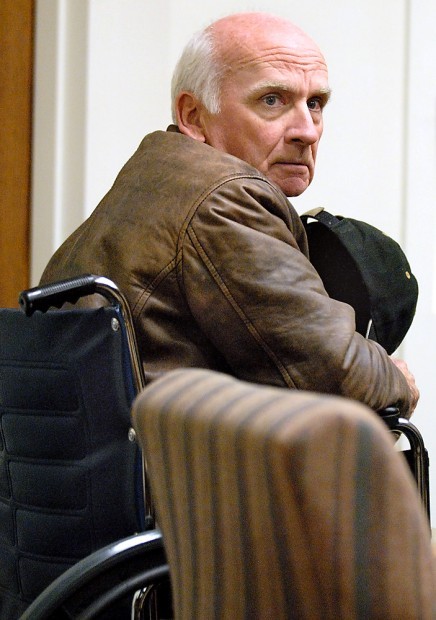 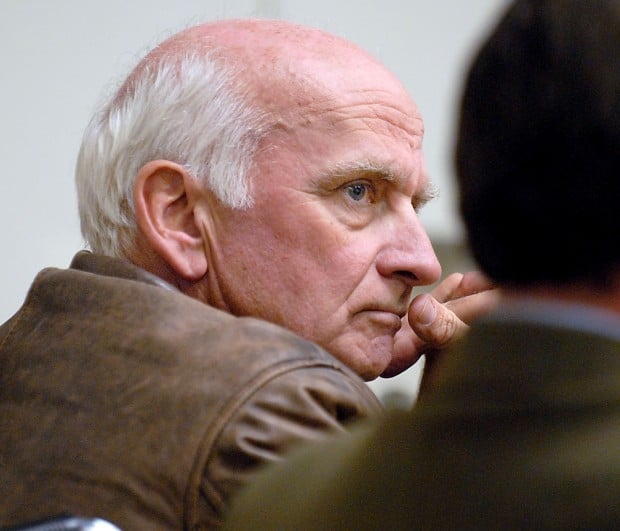 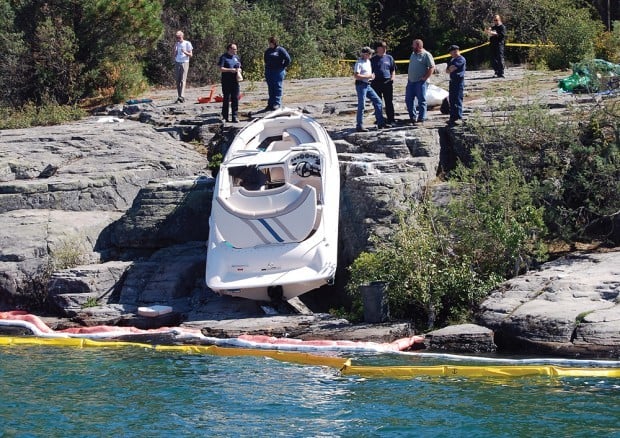 Investigators from Montana Fish, Wildlife and Parks look over the scene on Aug. 28, 2009, of a boat involved in a crash at Wayfarers State Park. Rep. Denny Rehberg badly broke an ankle in the accident. By VINCE DEVLIN/Missoulian

By MICHAEL JAMISON of the Missoulian

KALISPELL - Montana Sen. Greg Barkus has been charged with three felonies in the wake of an Aug. 27 Flathead Lake boating accident in which he and four others - including U.S. Rep. Denny Rehberg - were badly injured.

"We adamantly disagree with those alleged levels set forth in the charging document," the attorney, Todd Glazier, said in a statement. "We have several witnesses that will testify that Mr. Barkus was not impaired at the time of the accident."

Barkus has been charged with one felony count of criminal endangerment and two felony counts of negligent vehicular assault.

The endangerment charge comes with a maximum penalty of 10 years in prison and a $50,000 fine. The vehicular assault charges each carry a maximum 10-year, $10,000 penalty.

"Right now, I have no comment on the matter," Barkus said Wednesday, adding that he intends to release a prepared statement in the coming days.

An arrest warrant also was issued for Barkus, and bail was set at $30,000. At an initial appearance on Wednesday, though, Barkus was released on his own recognizance, and an arraignment in Flathead District Court was set for Oct. 22.

Investigators say the Kalispell Republican leader was driving his boat across Flathead Lake, from an "end of the summer" dinner in Lakeside to a resort in Bigfork, at about 10 p.m. when he ran into rocky cliffs near Wayfarers State Park. On board were Rehberg, his staffers Kristin Smith and Dustin Frost, and Barkus' wife Kathy.

Smith told investigators she saw Barkus drink "one hard liquor drink, Scotch perhaps," during the dinner, according to charging documents filed Wednesday. The dinner tab and a waitress statement show he had two Scotch drinks.

"And so I remember Greg had - had one of those," Smith told authorities, "and then after that I saw him drinking red wine. ... They had bottles of red and white wine out, um, you know, with drinks. So I saw him - he was basically drinking, at least what I saw, red wine for the rest of the night."

But Glazier said that "in fact, the dinner receipt will show that Mr. Barkus did not consume enough alcohol to be impaired when he left the restaurant shortly before the accident, nor was there any alcohol aboard the boat. As the Frost family has said, this was just an unfortunate accident, but nothing more than an accident."

The group left the Lakeside restaurant at about 10 p.m., and court records state "it was dark at the time. The Barkus boat was not equipped with a spotlight or other lighting to illuminate its path."

Charging documents indicate Barkus was navigating by GPS, but "according to Ms. Smith, at one point during the trip the Defendant appeared to be confused about their direction of travel - 'I think I'm turned around' - and believed they were heading toward the river rather than Bigfork. At that time, he made a 'big' course correction to the right."

Smith told investigators she believed the boat was traveling at about 40 mph through the dark. The speedometer appeared broken, but she "recalled the engine being run at 4,000 RPM."

Boat experts concurred that at that RPM, with five passengers on board, the boat could have been traveling as fast as 45 mph.

Charging documents quote Smith saying "we were definitely heading, like, full speed straight forward," when she realized they were about to hit the rocky shore.

Scrape marks and debris patterns led investigators to conclude the boat was heading north when it ran aground, "went airborne, and then crashed into the rocks and cliff where it came to rest."

Responding to an emergency call received at 10:18 p.m., authorities "found the boat lying completely out of the water lying vertically against a cliff," according to court records.

Rehberg had a badly broken ankle as well as a minor head injury; Barkus suffered a broken pelvis, fractured ribs and lacerations; Frost suffered a serious head injury, "and was in a coma for several days," court records state. All three continue to recuperate. Smith and Kathy Barkus "suffered less serious injuries," although Smith did sustain several fractures.

Rehberg, who had previously said Barkus did not appear drunk the night of the crash, released a statement Wednesday saying "I was surprised to learn the results of Greg's blood-alcohol test. He didn't appear to be impaired to me when we got on the boat for the return trip to Bigfork."

Rehberg emphasized Barkus' presumption of innocence until proven guilty, and pledged to work with authorities as the case unfolds.

It is not the first time Barkus has been arrested for drunken driving. On June 3, 2004, he was arrested for driving under the influence of alcohol in Lake County, near Polson. He later pleaded guilty to reckless driving, and was fined $335 and ordered to complete a DUI offender program.

Dennis McDonald, in a primary race to become Rehberg's Democratic challenger, at one point accused the Republican congressman of being drunk the night of the accident.

Rehberg's BAC, taken a few hours after the crash, measured 0.05, below the legal limit. McDonald contends that had his blood been tested immediately, the alcohol content would have been over the limit. At no time, though, was Rehberg driving the boat.

Still, McDonald has demanded the congressman apologize to the public. Rehberg has not done so, and McDonald has in turn been accused of using the accident for political gain.

The accident investigation also caught the attention of political watchdogs when a local judge ordered police and prosecutors not to discuss evidence gathered through an investigative subpoena. That same judge later stepped down from the case.

In fact, because Barkus - the state Senate's majority whip - has carried legislation affecting the local District Court, all three judges there have since recused themselves from the felony case. The charges will instead by heard before District Court Judge William Nels Swandal of Livingston.

In the first count, felony criminal endangerment, prosecutors allege Barkus "knowingly engaged in conduct that created a substantial risk of death or serious bodily injury to others."

The second felony count, negligent vehicular assault, alleges Barkus "negligently operated a motor boat while under the influence of alcohol and caused serious bodily injury to another, Dennis Rehberg."

The third count is identical, except that it identifies the victim as Dustin Frost.

Those charges "make pretty good sense" said Andrew King-Ries, a law professor at the University of Montana. "I think they clearly fit the circumstances."

The negligent vehicular assault charges are narrow in scope, King-Ries said, designed for "just this sort of situation, when a person suffers serious bodily injury." The endangerment charge is broader, he said, and requires that Barkus "knowingly" put people at risk, but it also seems appropriate.

"He had no spotlights, and he thought he might be lost, but he's still operating the boat at a high speed, after having a few drinks - if you add all that together, I think you could argue he should've been aware there was a risk that something bad could happen."

Barkus, following his initial appearance in court, continues to recuperate at his Kalispell home. He remains confined to a wheelchair, and does not expect to be up and moving for several more weeks.

Rehberg and Smith both returned to work at the U.S. Capitol shortly after the accident, and Frost has recently begun communicating with the office again, via e-mail and telephone.

"He's not exactly back to work," Rehberg spokesman Jed Link said, "but he did participate in our staff meeting earlier this week."

KALISPELL - Nearly a year after an allegedly drunken state senator ran his boat aground - seriously injuring all onboard, including a congress…

Investigators from Montana Fish, Wildlife and Parks look over the scene on Aug. 28, 2009, of a boat involved in a crash at Wayfarers State Park. Rep. Denny Rehberg badly broke an ankle in the accident. By VINCE DEVLIN/Missoulian