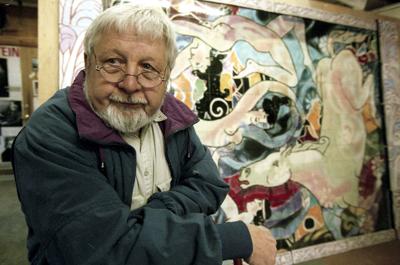 With his flowing drawings of figures and horses in generous colors on the surface of massive clay vessels or paper, Rudy Autio was often called “the Matisse of ceramics.”

The late artist, born and raised in Butte to Finnish immigrants, who’s famous for helping start an art center out of an unlikely place (a Helena brickyard), was plainspoken about the comparison when asked in an interview.

“Well, that’s not a bad one; I thought Matisse’s work was a lot like mine. I’ve seen very few bad Matisses so that’s not a bad label, if you want to look at it that way. The fact that he was interested in the figure and color, as I am, is a remarkable coincidence. I don’t know, I feel very fortunate doing what I’ve done, but then I can’t think of what else I would have been doing. It would have been a grim thing to become a copper miner and get my lungs filled with copper dust,” he told curator Peter Held in an interview.

Autio died in 2007 at age 80, having built a lifetime of work out of his home base here in Missoula. This year marks two occasions to revisit his life and art. The family has given work on paper and clay to show at the Radius Gallery for “The Creative Act,” the first Autio exhibition in his hometown in years. The family has also republished his memoir, “It Comes Around Again,” with additional photographs.

A timeline of Autio’s life:

Born in Butte to working-class Finnish immigrants. He has credited the city’s culture at the time, with theater and opera and visiting artists from the Works Progress Administration, with stirring his interest in art.

Autio joined the Navy after graduating high school and was stationed in California.

Autio graduates with a bachelor’s degree from Montana State College in Bozeman. He initially came there to study architecture. He later switches to art, and studies ceramics under respected artist Frances Senska, and meets his wife, Lela Autio, and his friend and future collaborator, Peter Voulkos.

Archie Bray, an art aficionado and the owner of the Western Clay Co. brickyard in Helena, hires Autio and Voulkos as founding resident artists of what became the Archie Bray Foundation for the Ceramic Arts, an internationally respected institution in the field. “It was and still is a place we could talk and influence each other’s work,” he said.

He completes his master’s degree from the Washington State University in Pullman and returns to the Bray, where he would stay until 1957. He received his first commission for a public mural, at the Liberal Arts Building at the University of Montana.

At the suggestion of K. Ross Toole, Autio is invited to start a ceramics program at the University of Montana, where he taught for 28 years. He taught generations of artists, including celebrated Missoula figures Beth Lo and Monte Dolack.

He completes “St. Anthony with the Christ Child,” a two-story mural at St. Anthony’s Parish. Autio, a fan of public art, once said, "that's what art is about: You can see it on a wall somewhere.”

He and his family travel to Italy to see art from the Renaissance and the Vatican and to New York to see contemporary American work.

Autio designs the cast-bronze grizzly statue, called “Grizz,” on the Oval at UM, which weighs some 5,000 pounds. “I guess it’s alright,” he said in 1977. “It’s become the mascot and it’s often photographed so I’ve become resigned to it.”

Autio receives a $10,000 grant from National Endowment for the Arts, which he uses to travel to Finland, the source of inspiration for later textile work. His visit to an Arabia Porcelain Factory to study their clay and glazes would later be visible in his signature pastel palette.

Autio receives one of the inaugural Montana Governor’s Art Awards for his contribution to visual arts.

At age 57, Autio retires from teaching at UM to pursue art full time. With his children off to college, he entered a particularly fruitful creative period.

Autio completes “Montana Horses,” the 20-by-30-foot tapestry in the PAR/TV Building at UM, made with weaver Anneli Hartikaninen.

Autio unveils a tapestry for display in a building in Helsinki.

Autio receives the American Craft Council’s Gold Medal. His wife, Lela, wrote that many of his largest and most colorful vessels were created during the 1990s and the 2000s.

“Rudy,” a retrospective at the Missoula Art Museum, examines his sculptures and public murals. At the time, Peter Held, the director of the Holter Museum of Art in Helena, said he is arguably Montana’s most important living artist. “He’s always been true to his unique vision.”

Autio is diagnosed with leukemia but continues working, heading to the Bray Foundation the next year to make six large pieces while in remission.

He is named a “Master of the Medium” by the James Renwick Alliance in Washington, D.C., which is considered one of the major honors in the field. Previous recipients included Voulkos.

Autio dies of leukemia at age 80. “Together with Peter Voulkos, Rudy helped change what it meant to be a ceramic artist in America,” said MAM’s curator, Steve Glueckert.

The late Rudy Autio "opened the door for many, many artists to try more experimental approaches to ceramics."

Jesse Alberi was out elk hunting 12 years ago when his truck rolled on a hilly dirt road. The accident crushed the cab and left him paralyzed …

A 55-year-old Big Arm man was arrested Friday on suspicion of sending child pornography to an undercover FBI agent. 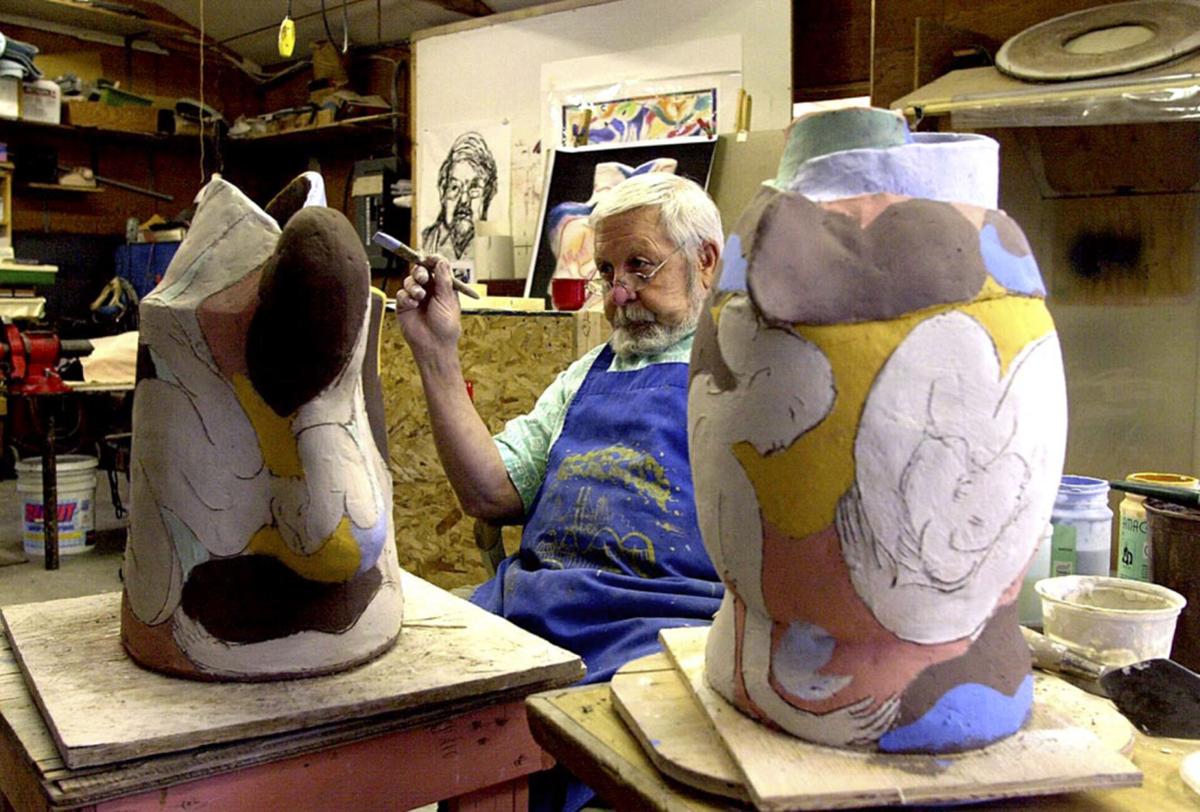 Ceramic artist Rudy Autio works on a piece at his Missoula studio on May 30, 2001. Autio helped transform ceramics from what was once viewed as a craft into an art form, and became internationally known as one of the medium's most significant artists. 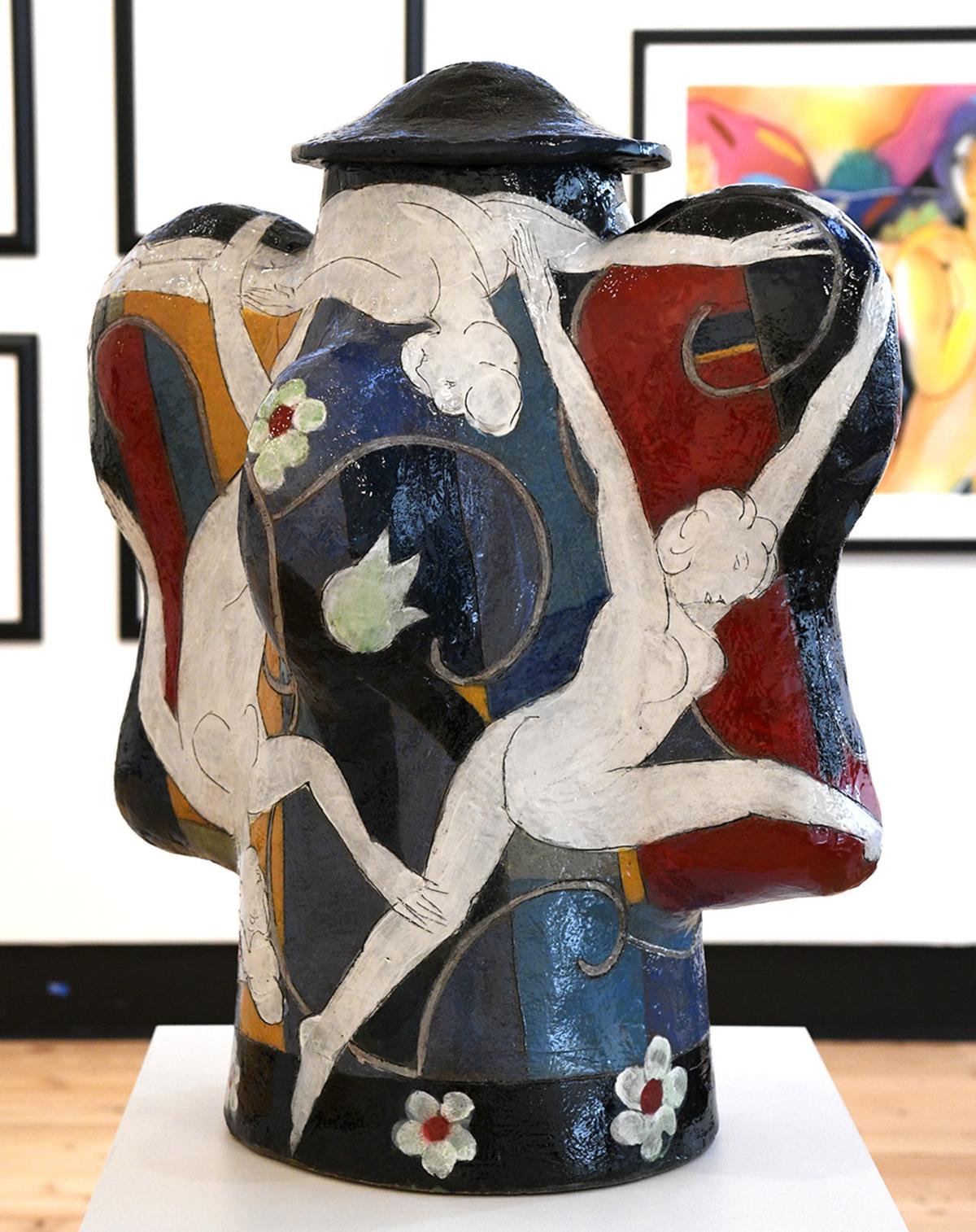 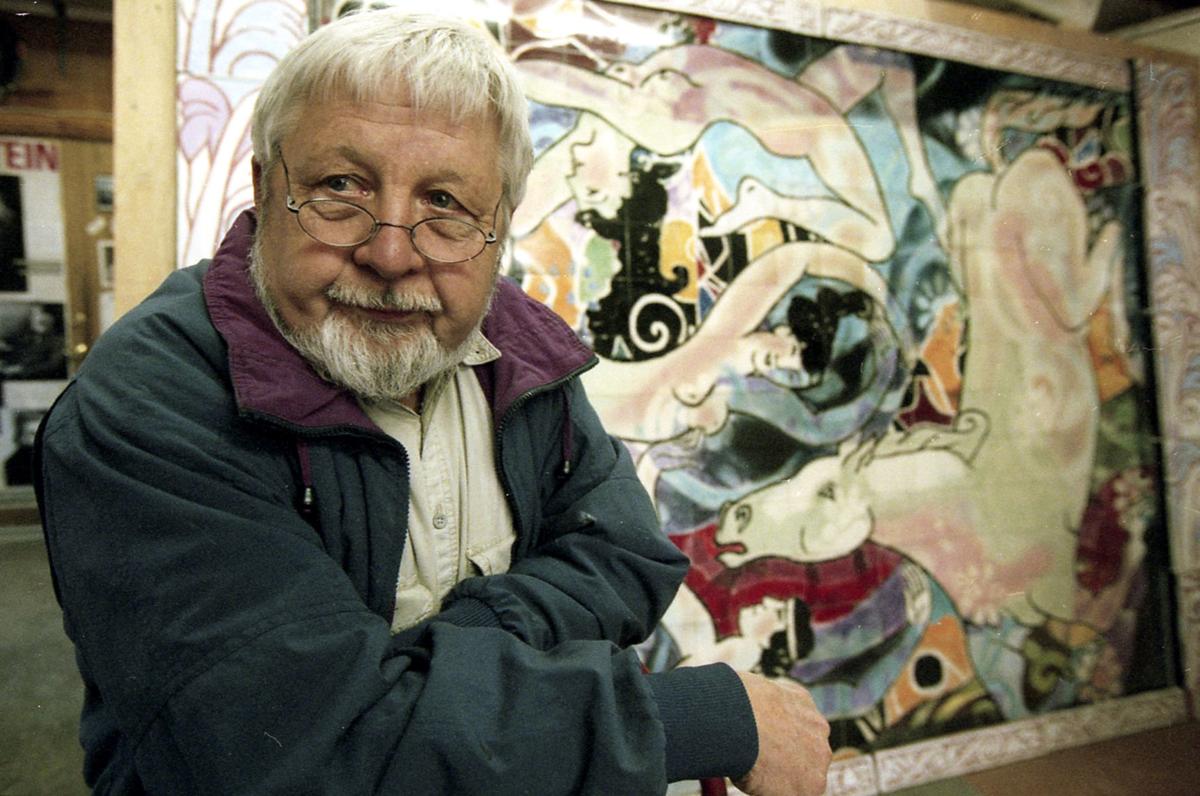 Rudy Autio in 1998 with a piece he designed for a Japanese school consisting of about 250 tiles. 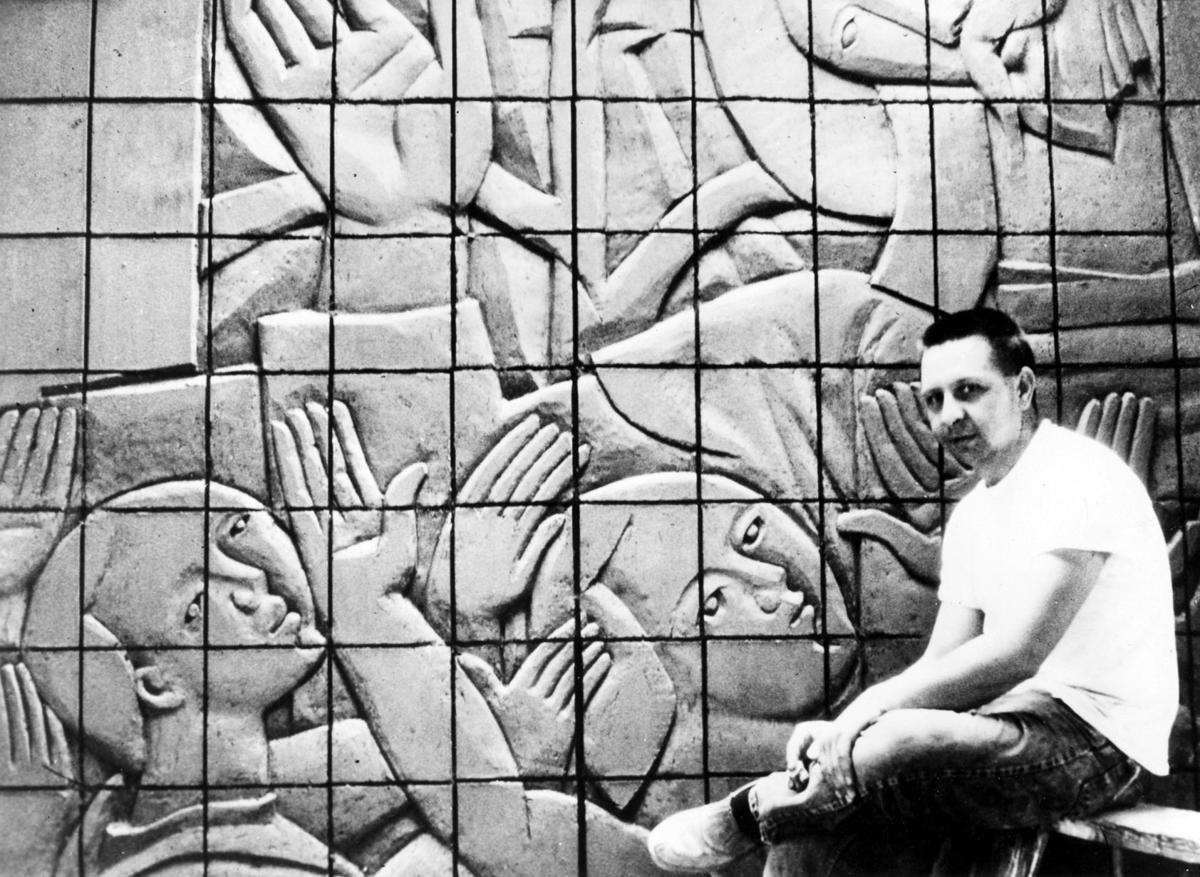 Rudy Autio in 1957 working on his carved brick relief for Gold Hill Lutheran Church in Butte. 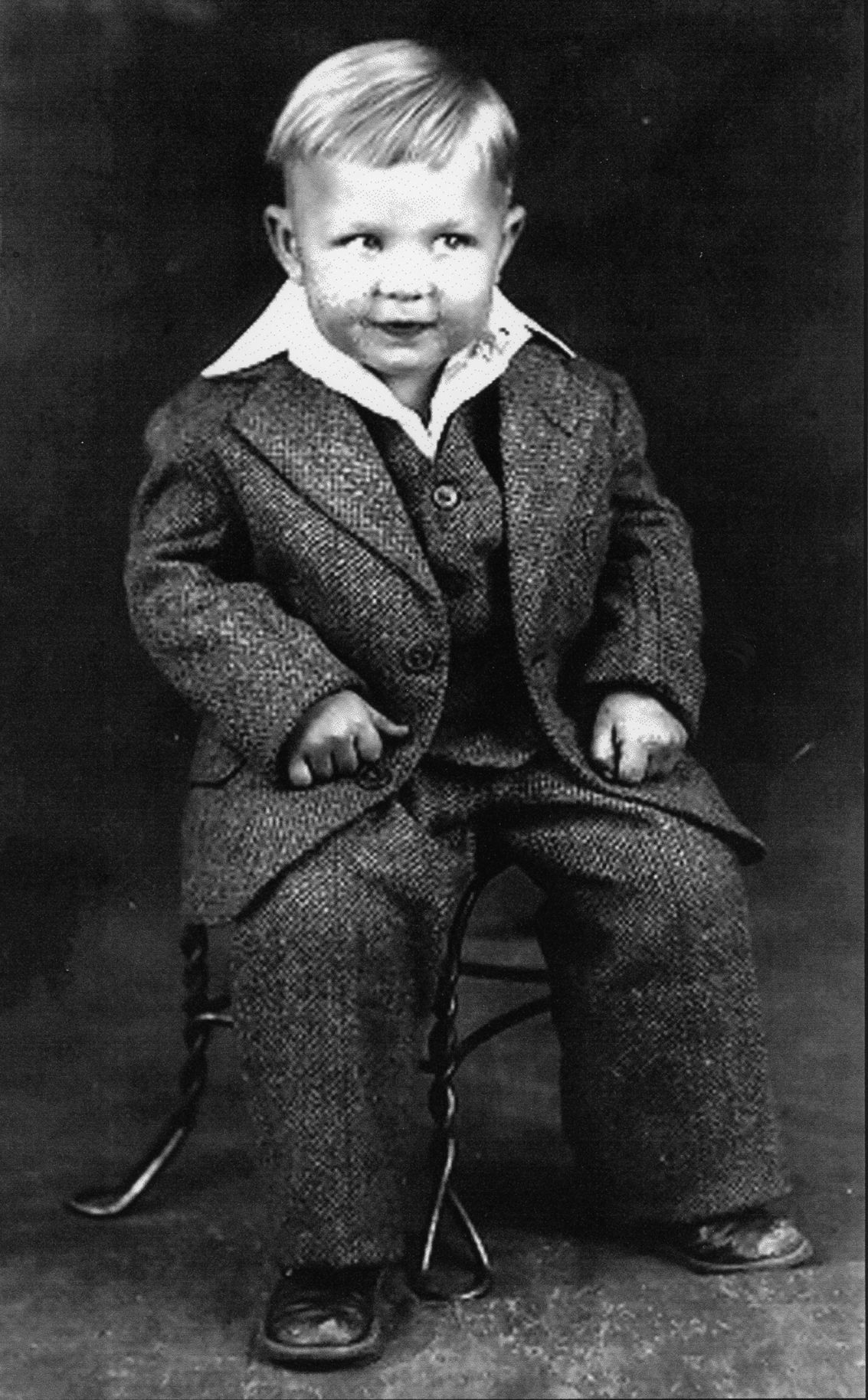 Autio in 1930 at about three years old in a suit made by his aunt. 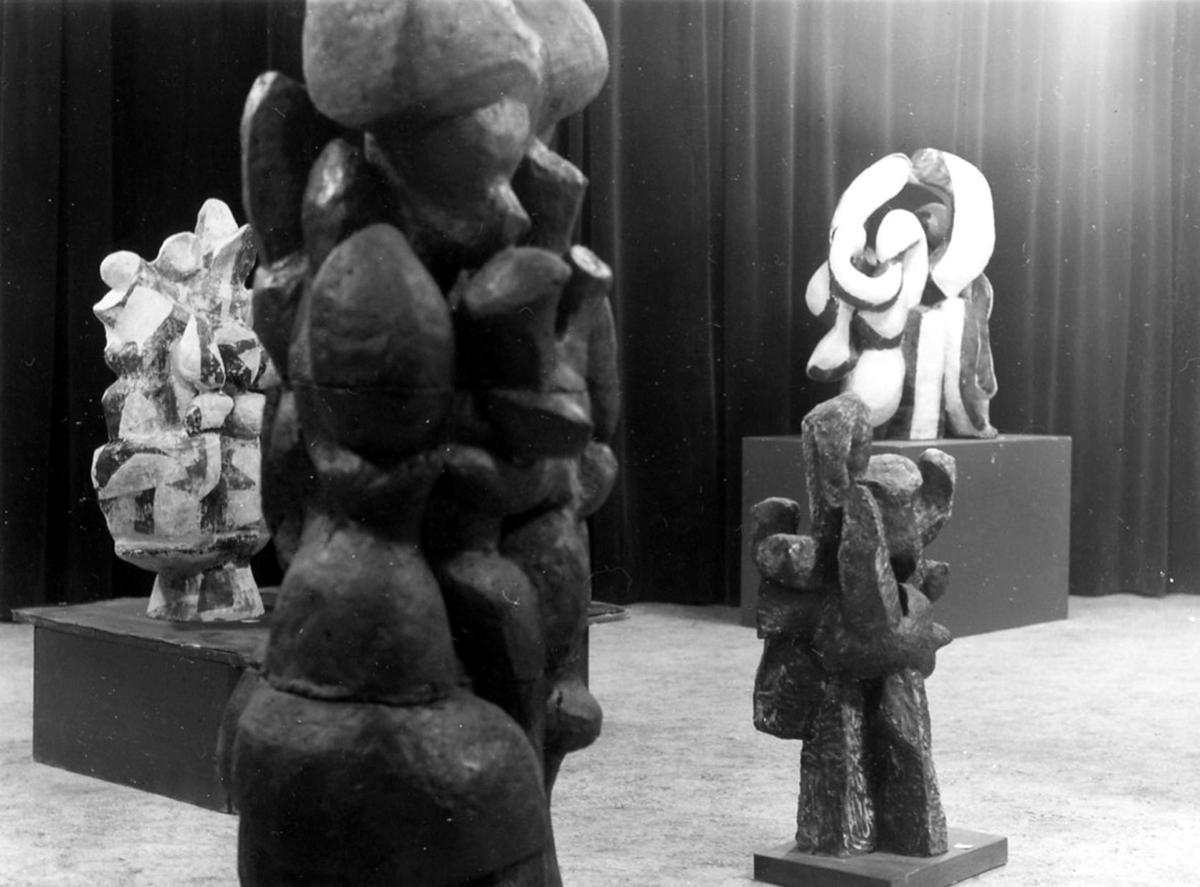 Autio's abstract expressionist pieces from 1959 in a show at the old Art Building at the University of Montana. 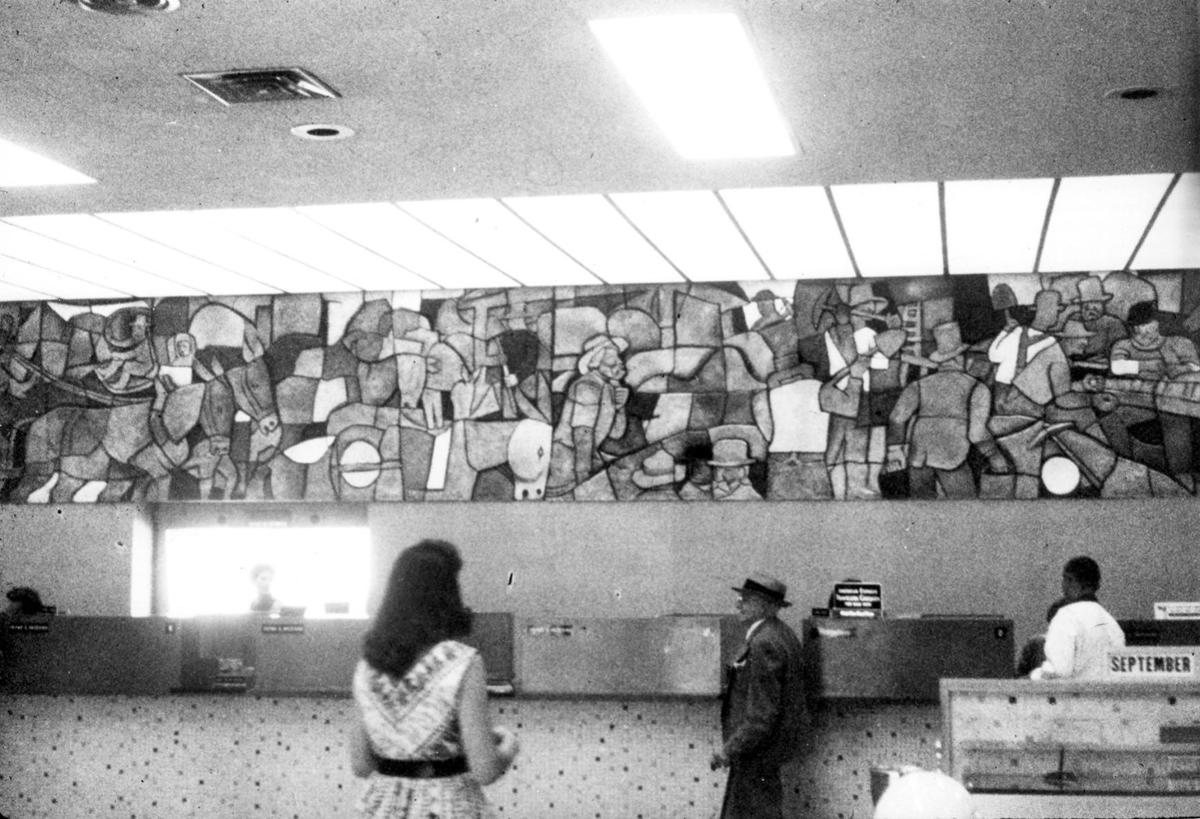 Autio's "Early Days of Last Chance Gulch" mural was installed in 1959 at Union Bank and Trust in Helena. The bank is now Wells Fargo Bank. 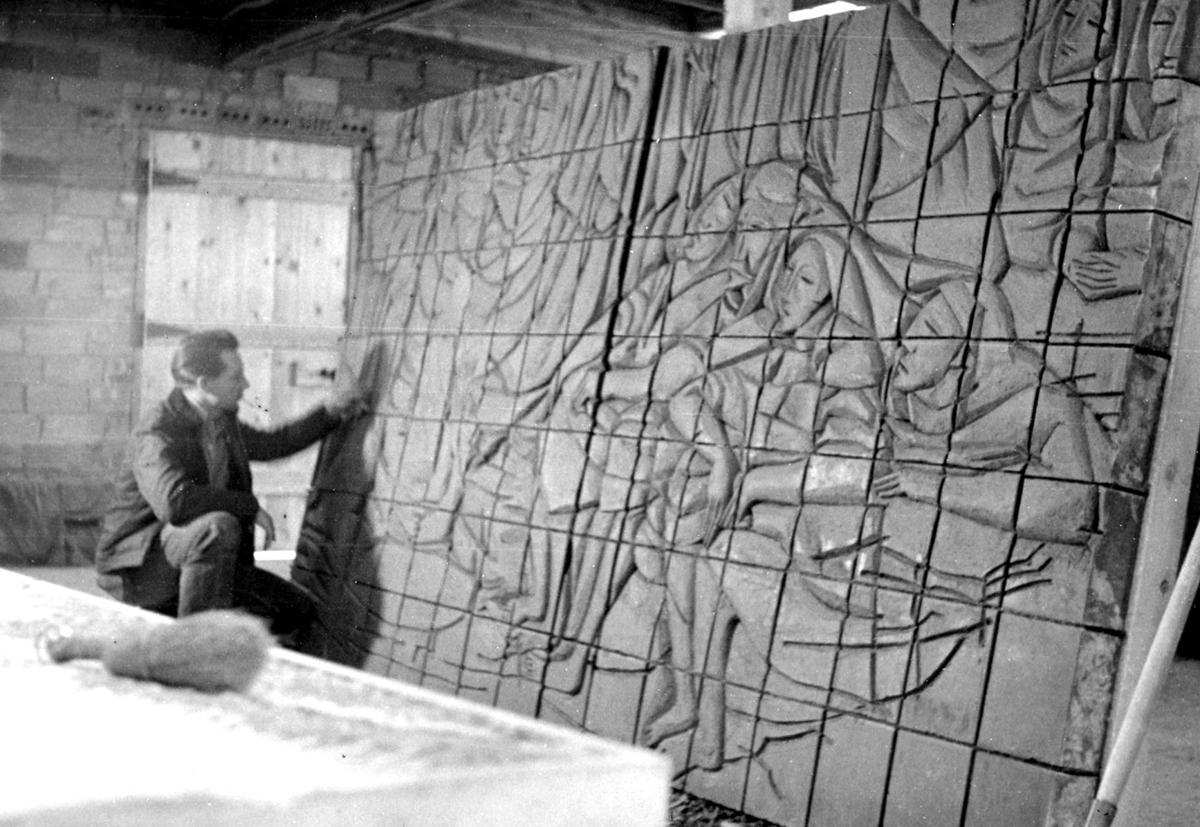 Autio in 1954 at the Archie Bray Foundation looking at a portion of his 39-foot-long "Sermon on the Mount" mural for First Methodist Church in Great Falls. 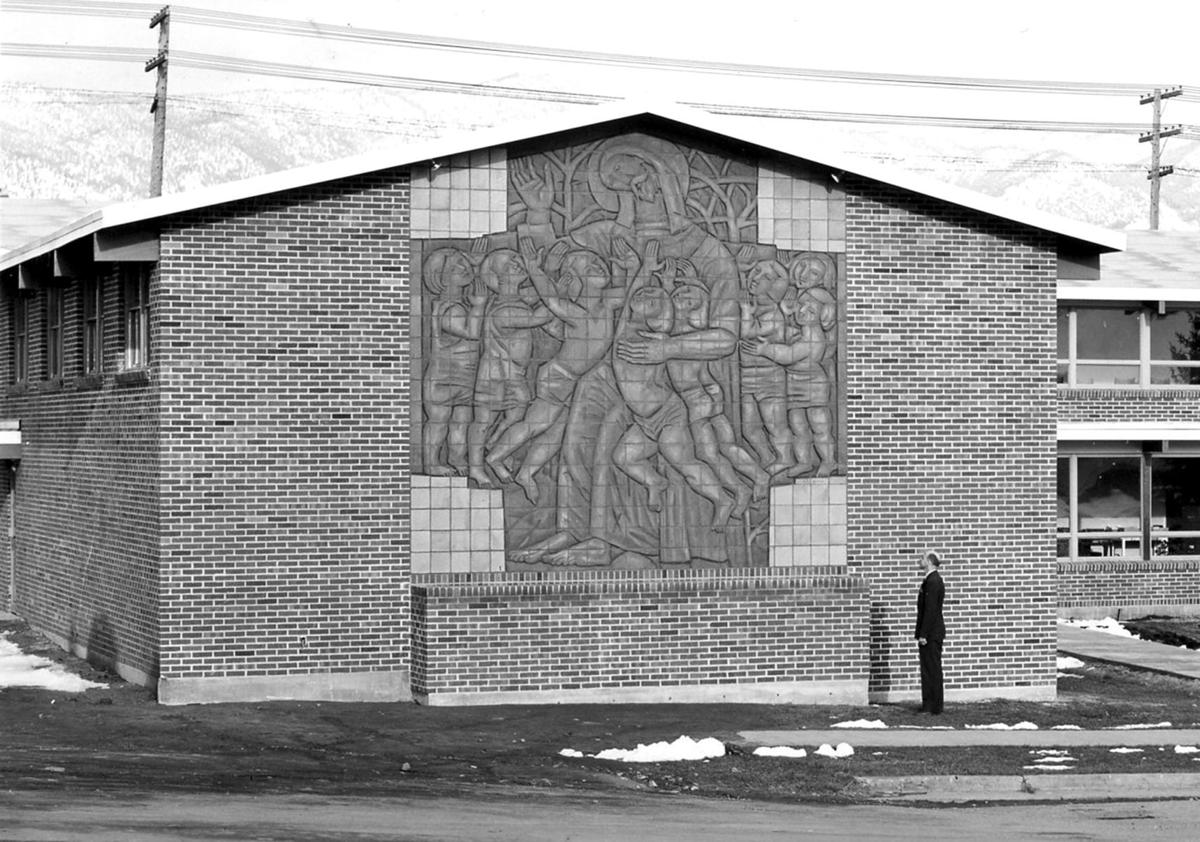 Autio's "Christ and the Children" mural on Gold Hill Lutheran Church in Butte. 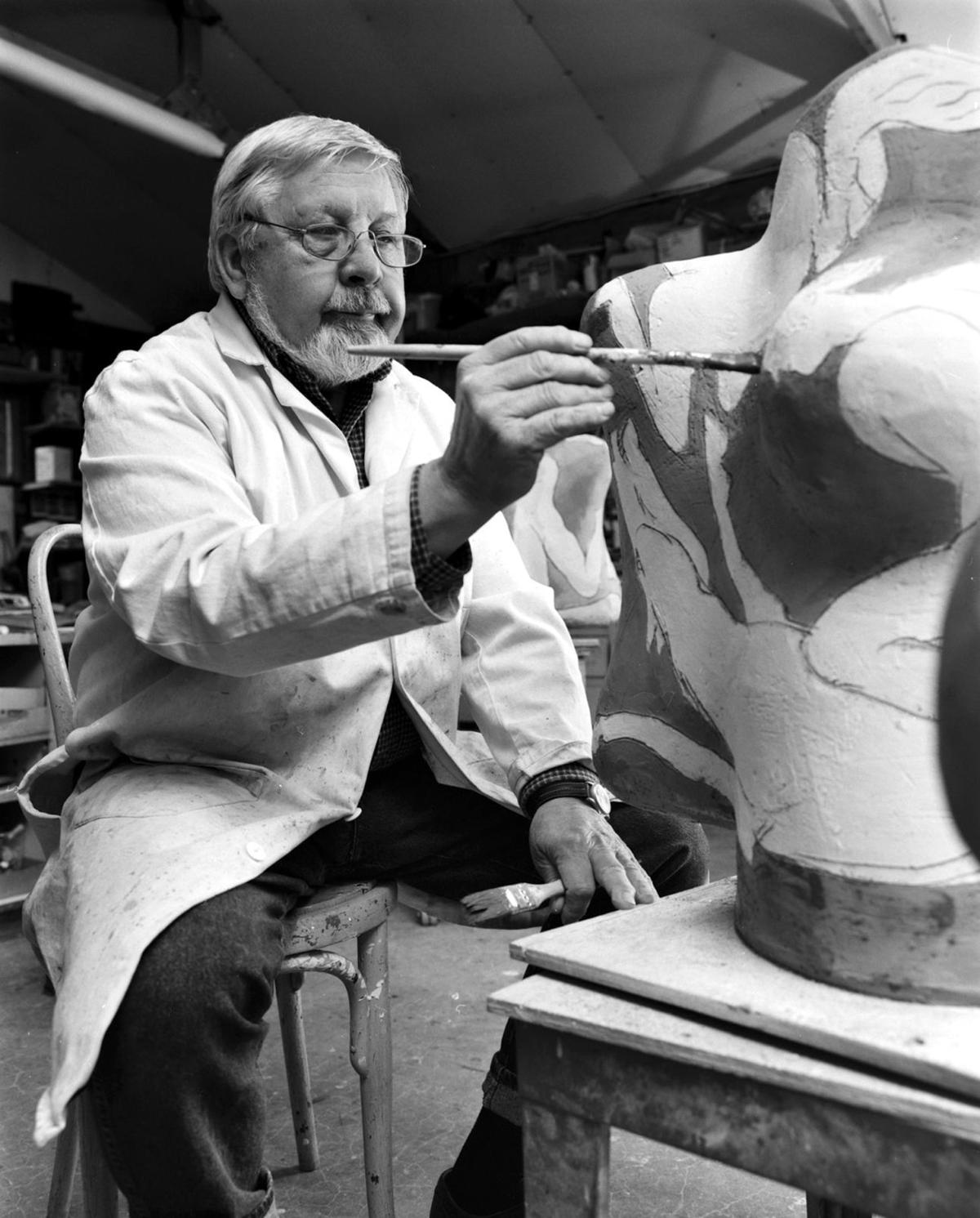 Autio glazing work in the studio in 1996. 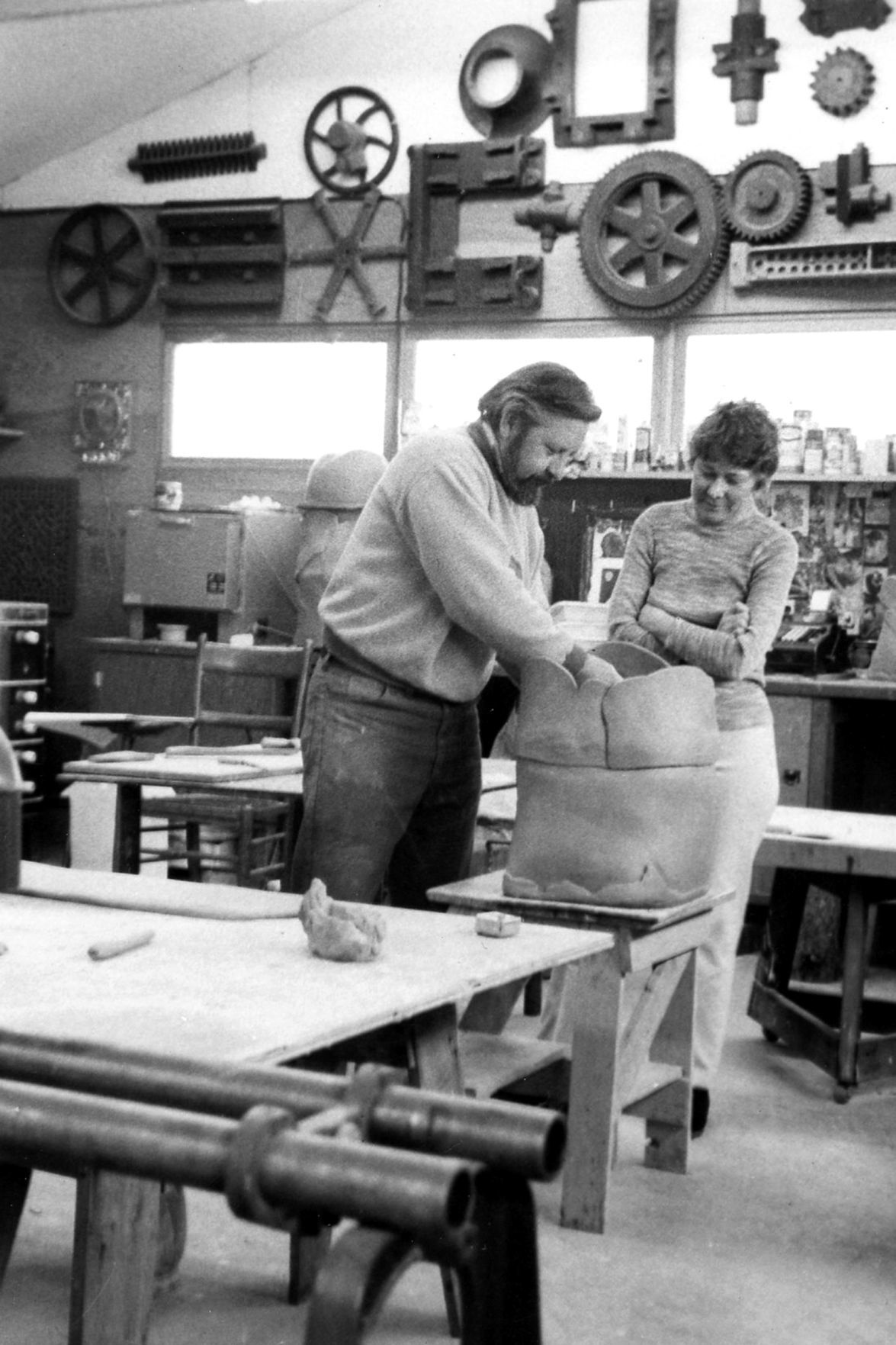 Rudy and Lela Autio in the studio in Missoula, sometime in the early 1970s. 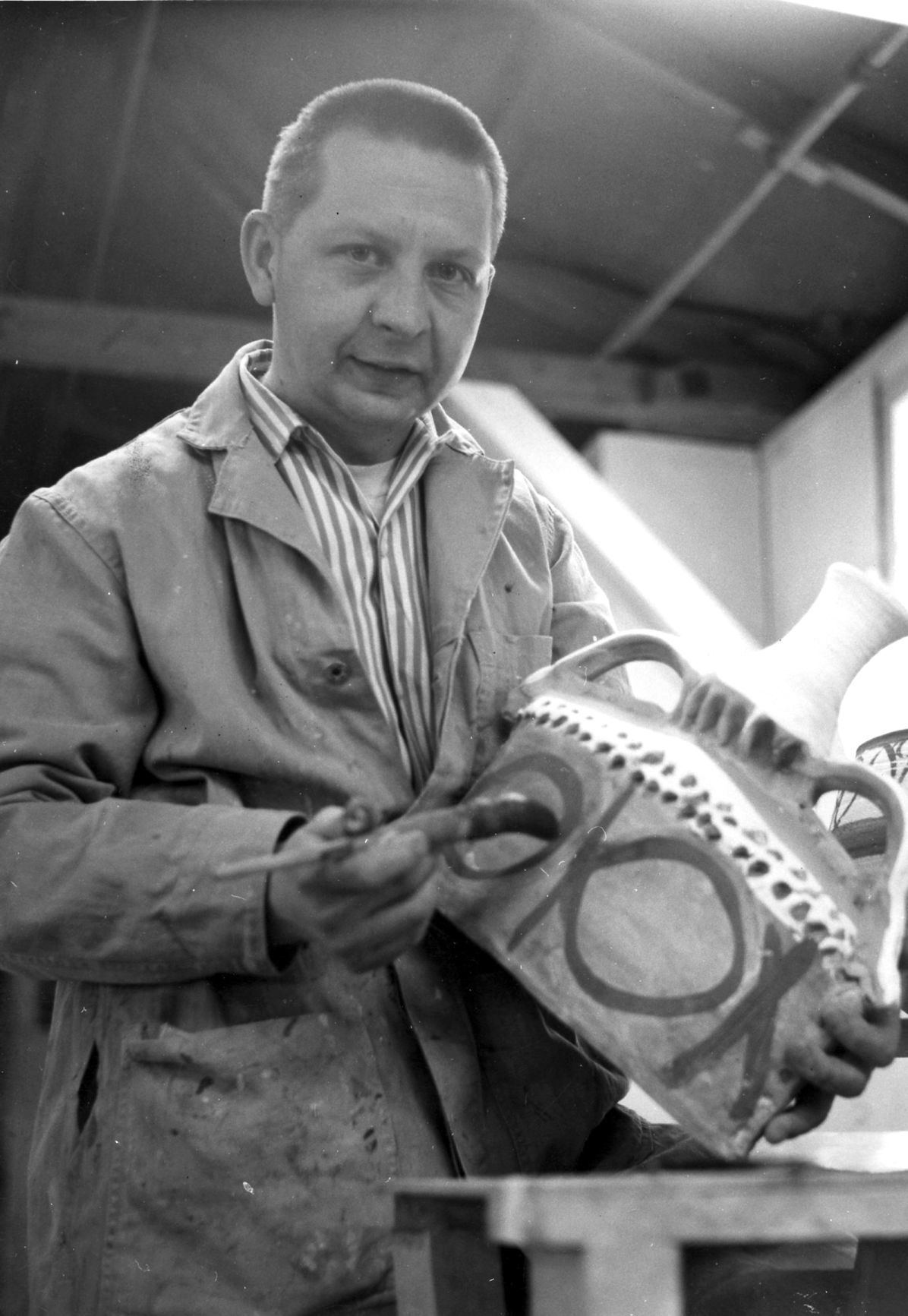 Autio working on an early piece, likely in the early 1960s. 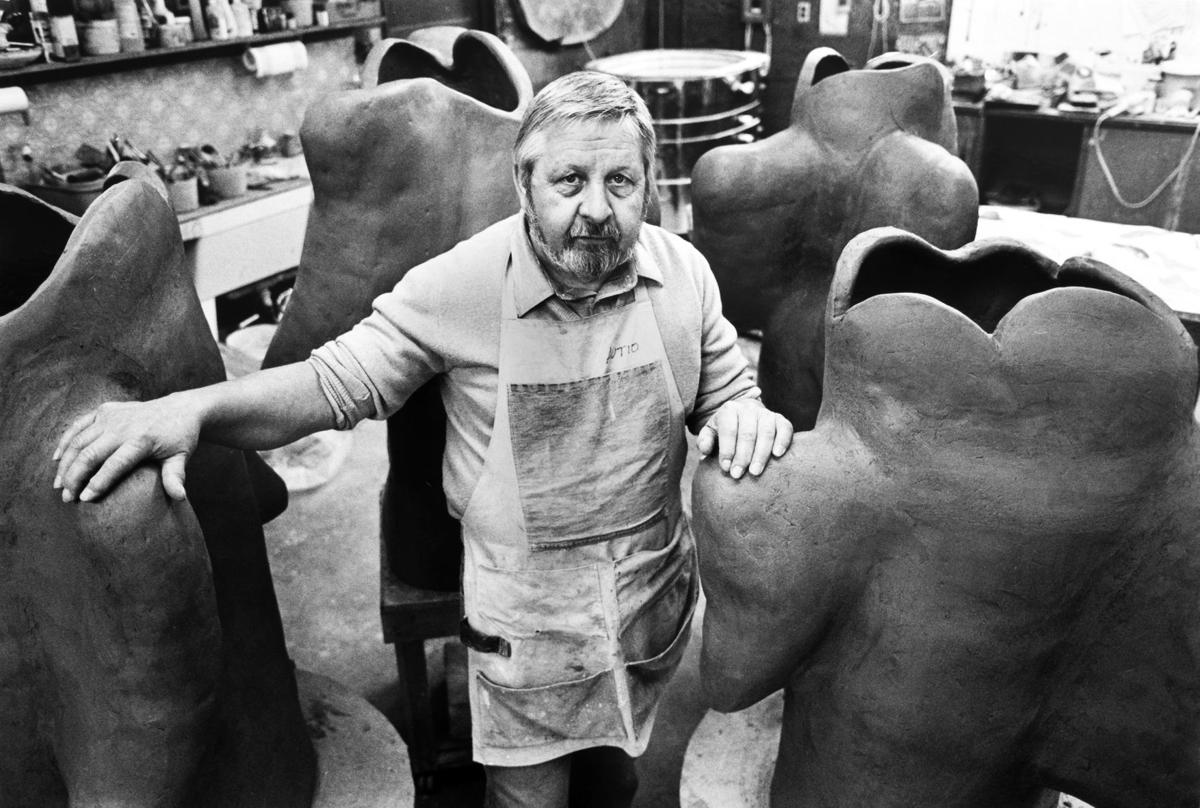 Autio with vessels in the studio in 1989.