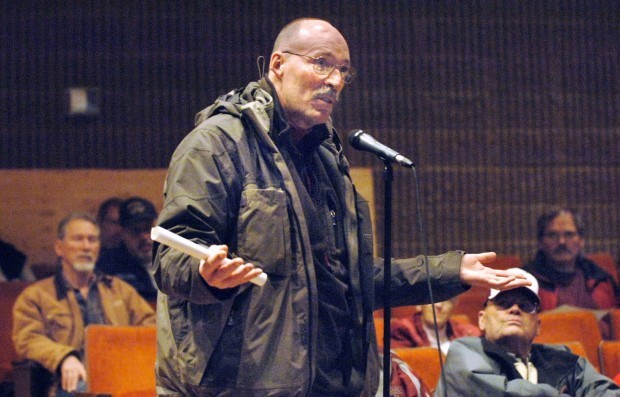 “I’m quite confused,” said 30-year Frenchtown resident Lance Collister. “I’ve heard talk about alternatives or what to use the mill site for, and I’ve heard talk about a new buyer making it a paper mill. My question is, does anybody know what Stone’s intent is?” Collister was searching for answers at a meeting with Missoula County commissioners, the West Valley Community Council and representatives from the Frenchtown School District, Frenchtown Fire District and other professionals at a meeting Thursday night in Frenchtown to discuss the Smurfit-Stone Container Corp. mill closure. Photo by MICHAEL GALLACHER/Missoulian 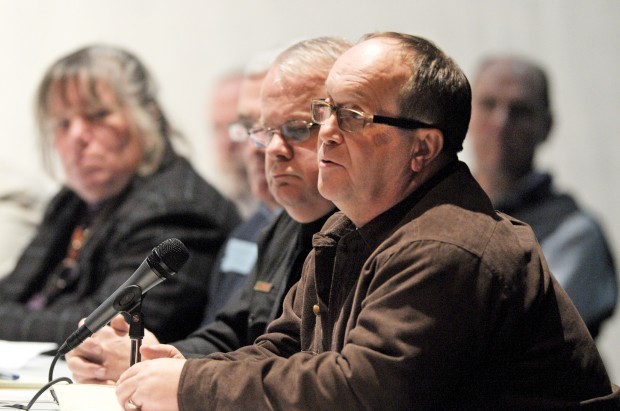 Randy Cline, superintendent of the Frenchtown School District, was on hand to answer questions about how the mill closure will affect school funding. Photo by Michael Gallacher/Missoulian
{{featured_button_text}}
1 of 3

“I’m quite confused,” said 30-year Frenchtown resident Lance Collister. “I’ve heard talk about alternatives or what to use the mill site for, and I’ve heard talk about a new buyer making it a paper mill. My question is, does anybody know what Stone’s intent is?” Collister was searching for answers at a meeting with Missoula County commissioners, the West Valley Community Council and representatives from the Frenchtown School District, Frenchtown Fire District and other professionals at a meeting Thursday night in Frenchtown to discuss the Smurfit-Stone Container Corp. mill closure. Photo by MICHAEL GALLACHER/Missoulian

Randy Cline, superintendent of the Frenchtown School District, was on hand to answer questions about how the mill closure will affect school funding. Photo by Michael Gallacher/Missoulian

FRENCHTOWN - These were the faces of western Montana, and none of them were smiling.

Onstage and off in the high school auditorium Thursday night, there were more questions than answers about what's to become of us now that the Smurfit-Stone Container Corp. paper mill has closed.

Seventy people, only a dozen or so of them newly laid-off millworkers, came wondering what the immediate future holds and how Missoula County can help out.

The host West Valley Community Council, along with all three county commissioners and several other county officials and economic development leaders, sat on the stage and tried to sort through the devastation of a closure that has directly cost the area 417 jobs but will effect thousands of families and almost every business around.

No place will feel the hurt more than the Frenchtown Valley.

What's going to happen to the schools and the fire district? they wondered. How can we hope to pay our taxes, especially after the latest reappraisal?

What will become of Smurfit's extensive water rights? Its acres and acres of agricultural properties? How about the amazing wetlands that Larry Weeks and the Five Valleys Audubon Society have reclaimed from cooling ponds that are even now going dry?

Collectively, everyone pledged to do whatever they can to help. Singly, few could say what that might be.

Dick King had one suggestion. The director of the Missoula Area Economic Development Corp. urged everyone to write a letter to the bankruptcy court judge who'll hear Smurfit's case on Jan. 29.

"One of the things we need to do is communicate to the bankruptcy court that we think this closure is important to us," King said. "We need to tell the judge and the other people involved in this court that anything that can be done to find a way to keep this facility operating should be done."

King said he has a list of addresses to send such letters to. He'll pass it on to as many agencies as he can to distribute, and it'll be posted on both the MAEDC and the Missoula County Web site.

"Bankruptcy court takes that into consideration," he promised. "Yes, they look at all the legal documents and all that sort of stuff, but they also consider community impact and the significance of the decision."

"We need a mass number of letters to hit these folks and move them off dead-center," he said.

Smurfit-Stone, which has more than 150 manufacturing facilities in North America, filed for bankruptcy a year ago in U.S. Bankruptcy Court in Wilmington, Del. On Jan. 29, Judge Brennan Shannon will hear a request to convert the Finance II bankruptcy to Chapter 7 liquidation.

In this valley, much depends on the conditions when the corporation emerges from bankruptcy. Until then, Superintendent Randy Cline said, he doesn't know what effect the closure will have on a school district that realized nearly one-fourth of its funding from the mill's property taxes.

It won't affect this year's budget, he said, but next year's is anyone's guess.

The judge is also expected to dictate what to do about the more than $2 million in delinquent taxes Smurfit owes the county.

John Bibler, chief of the sprawling Frenchtown fire district, said he intends to fulfill the two goals he had when he arrived last May: not raise taxes and expand services.

"From the county's standpoint, we're doing everything we can to not raises taxes," county commissioner Michele Landquist said.

But can't you do something to reduce them? wondered Christine Hardy.

"Our backs are breaking," she said. "Is there going to be any relief for us?"

Bill Nooney, a state representative from the Frenchtown district, said he's on the revenue and taxation interim committee that's charged this winter with finding ways to mitigate the effects of reappraisal.

Susan Peterson asked the commissioners why they rejected Smurfit-Stone's offer in November to make full payment of $1.2 million of taxes it owed in May, in exchange for the county dropping penalties and interest.

They had no choice, commissioner Jean Curtiss replied.

"State law does not allow us to take their money without penalty and interest," she said. "But the bankruptcy court could order them to pay it back without penalties and interest and then make an exception. So it's just an unfortunate little glitch in the law."

Peter Nielsen of the Missoula City-County Health Department, said he got word from Smurfit‘s environmental affairs office that the company planned to remove all hazardous materials from the mill site. It intends to keep all the environmental and water rights permits open for the time being. While it isn't pumping water into the settling ponds any more, it will continue to operate the wastewater system.

With that in mind, Nielsen said residents shouldn't expect unpleasant odors from the dead mill.

Reporter Kim Briggeman can be reached at 523-5266 or at kbriggeman @missoulian.com.

Here’s a brief timeline of the Frenchtown pulp mill’s history:

Questions continue to stack up as millworkers at Smurfit-Stone Container Corp.’s Frenchtown …