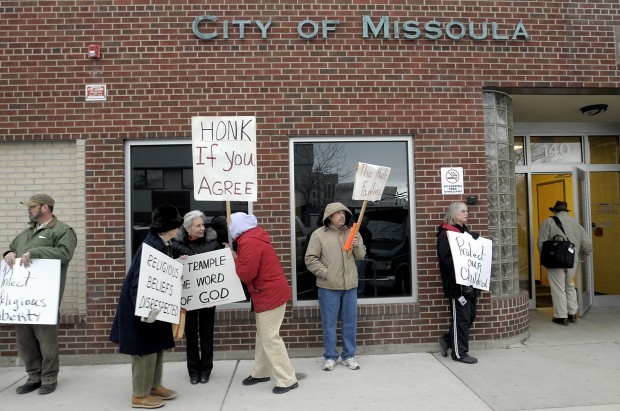 Protesters against a proposed city anti-discrimination ordinance stand outside City Council Chambers in Missoula on Monday as council members arrive for their meeting. The ordinance would prohibit discrimination based on sexual orientation and gender identity. Photo by TOM BAUER/Missoulian 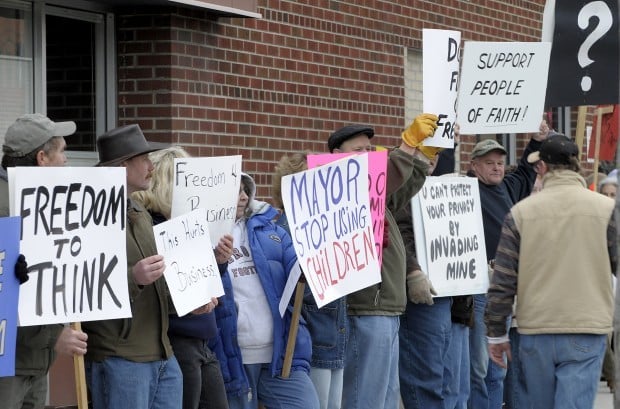 About 50 people showed up to protest the ordinance. Many against the ordinance fear for the safety of women and children in public bathrooms and say businesses will have to spend more money to provide additional facilities. Photo by TOM BAUER/Missoulian
{{featured_button_text}}
1 of 2

Protesters against a proposed city anti-discrimination ordinance stand outside City Council Chambers in Missoula on Monday as council members arrive for their meeting. The ordinance would prohibit discrimination based on sexual orientation and gender identity. Photo by TOM BAUER/Missoulian

About 50 people showed up to protest the ordinance. Many against the ordinance fear for the safety of women and children in public bathrooms and say businesses will have to spend more money to provide additional facilities. Photo by TOM BAUER/Missoulian

"Don't trample the word of God."

Holding signs printed with those statements and others, an estimated 50 people plus some children demonstrated Monday in front of Missoula City Council Chambers against a proposed equality ordinance.

Most protesters asked to share their names and discuss their signs directed inquiries to NotMyBathroom.com leaders Dallas Erickson of Stevensville or chairman Tei Nash of Missoula.

"All I have to say is we oppose it. Talk to Tei," said Michelle Bashor of Missoula.

"We were told not to talk with anyone," said another unnamed demonstrator. "That way we don't cause a conflict."

The proposal, slated for a public hearing April 12, intends to protect people including gay, lesbian, bisexual and transgender folks from being booted from their homes and jobs based on "actual or perceived ... sexual orientation, gender identity or expression."

Opponents fear the law would cost businesses money "to provide toilet facilities," and possibly "force ministers to perform homosexual marriages." Chairman Nash has noted the chief concern of NotMyBathroom.com is to protect women and children from sexual predators in bathrooms. One young girl held a sign Monday that said "Keep me Safe."

To join the protest, people came from Philipsburg and parts of the Bitterroot Valley, as well as Missoula.

Karla Wallace of Florence looked to Erickson for the green light to talk with a reporter. Erickson, a longtime crusader on morality issues, stood by and told her to speak from her heart.

"I'm here because I don't believe the ordinance is right," Wallace.

Karla Wallace's husband, Robert Wallace, said the group isn't against the people the law means to protect. But he said he doesn't want to make it easier for someone with offensive intentions to hurt his daughter or granddaughter in a Missoula bathroom.

"I feel that it would open the door. What if it was a pervert?" Wallace said.

He also said he wouldn't fire someone for being gay - but he would let someone go for being lazy or late. And Wallace fears employees might blame employers for firing them for the wrong reasons.

Jill Brezenski of Missoula held a "Home sweet home, my renters, my choice," sign. Brezenski said she was not a landlady, but she wanted to protect the rights of landlords to rent to whomever they choose - and not rent to tenants they didn't choose. She wouldn't identify people who would be on the latter list.

"I don't need to answer that," Brezenski said.

Most people would not speak with reporters but held signs: "Mayor Engen please do not lead our children astray." "Not in our town." "Down with frivolous lawsuits." "Go Green Recycle the City Council." "This hurts family."

Erickson, of Help Our Moral Environment, said people weren't talking to reporters because the picket had rules.

"That way we keep order," Erickson said. "These things can get out of hand."

NotMyBathroom.com has lost a lawsuit alleging Missoula city and county officials tried to thwart its petition to strike down the city's anti-d…