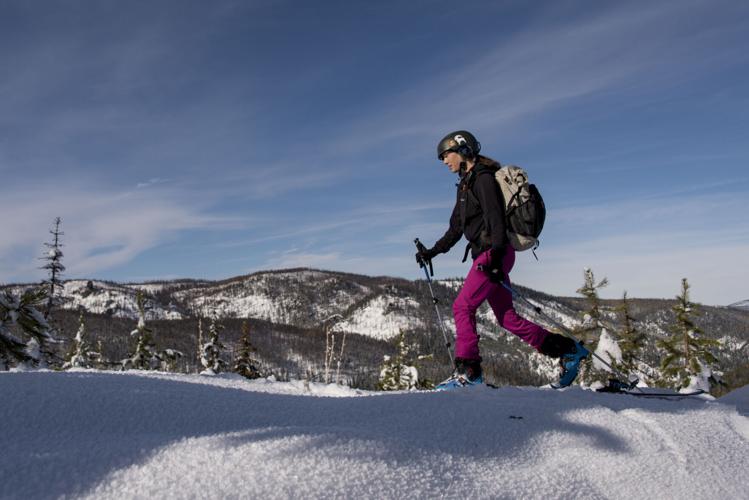 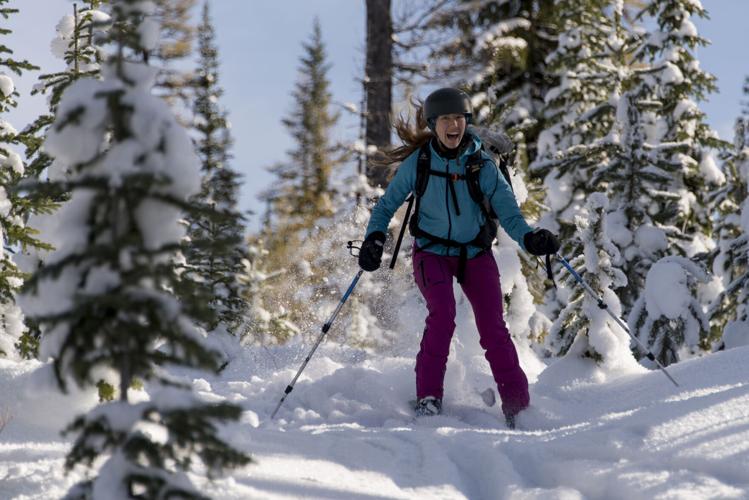 There might not be a lot of snow in the backcountry around Missoula right now, but it's deep for mid-November, and just barely deep enough for fun powder skiing in some places. 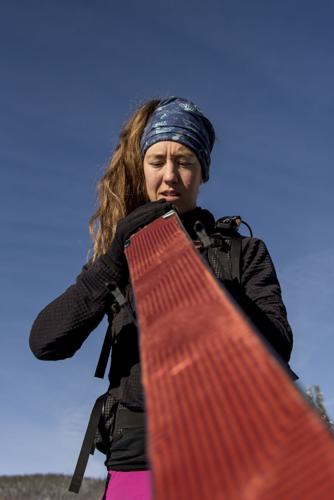 Climbing skins, like this one being applied before a ski tour near Lolo Pass on Nov. 16, allow backcountry skiers and snowboarders to hike uphill. 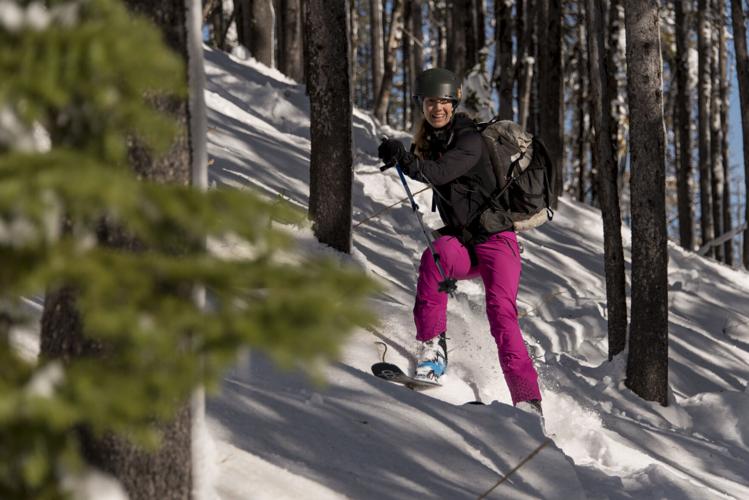 Hope Spargo skis through powder in the backcountry near Lolo Pass on Nov. 16. 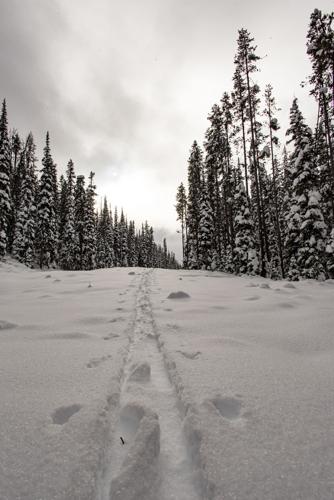 Backcountry skiers and snowboarders set a skintrack up a powder-covered run at Lost Trail Ski Area on Nov. 13, before the ski area started running its lifts for the winter.

There isn’t a ton of snow in the mountains around Missoula right now.

But there is a lot for mid-November. And, better yet, it’s (barely) deep enough to ski in some places. Snowpacks across the area are 150% to more than 200% their normal depths for early and mid-November, courtesy of so-far-accurate predictions of a cold, snowy winter across western Montana.

Head to Marshall Mountain or Snowbowl ski areas just outside town, down to Lolo Pass about an hour southwest, into the central Bitterroots, or farther afield to Lost Trail Pass and Ski Area, and you’ll see a handful of hardy skiers and snowboarders each morning applying climbing skins to backcountry skis and splitboards. They might take one last sip of hot coffee in the pre-dawn gloom or brilliant sunrise rays. Then they’ll shed layers, lock their cars and begin their hike upward into a newly winterized mountain landscape full of trees glinting with frost.

“It’s great, and I’m hoping the snowpack stays and grows as well,” said Steve Peterson. A 70-year-old Missoulian, Peterson was unloading backcountry skis from his Jeep Wrangler at Lost Trail around 10:30 a.m. on Nov. 13, under a low cloud ceiling and amid temps in the mid-20s. He made the two-hour trek south that morning for his first day of backcountry skiing of the season; he had already been cross-country skiing this winter.

Peterson was excited to be out skiing powder, and noted that his children have also been getting in a lot of powder turns. His son, a guide in the Beartooth Mountains, would normally be prepping backcountry huts for the season. But with all the early snow, “it’s been epic, I don’t know how much work he’s doing.” His daughter, in Bozeman, has also been touring already.

Listen to our Montana Untamed podcast:

In backcountry touring, lightweight powder skis, or snowboards that split in half for the uphills, are equipped with specialized bindings that allow a touring boot to pivot at the toe to take steps uphill. Heels lock in, and grippy climbing skins are removed, for the descents. Touring happens outside of operating ski areas. Deadly avalanches are always a concern, even in the most seemingly benign terrain, and specialized equipment and training are a must.

If backcountry skiers and riders are lucky, they’ll enjoy grin-inducing turns through fluffy powder on the way back down. Or, maybe, they’ll just bust through brush and bounce over logs and stumps, wishing for just a few more inches of snow at their favorite powder stash. That’s the case at Lolo Pass, which has classic “low-tide” conditions. Such is the nature of early-season backcountry touring.

Luckily, snow depth isn’t always a problem, even this early. At Lost Trail, nearly 3 feet of snow, fluffy on top, on open ski runs at the yet-to-open ski area offered top-notch powder to backcountry travelers willing to earn their turns.

Next to Peterson’s Jeep, two teens from Hamilton were unloading skis from their car, and lamenting a drive back to Hamilton to fetch a forgotten pair of ski boots. Lauren Nelson, 15, was ready for her third consecutive day of touring — her first days this winter — and Kadic Vermillion, 14, was excited to get out for the first time this season. Neither had skied in the backcountry so early in fall.

Lost Trail had “great coverage, (I) feel good about it,” Nelson said. “It was great, like skiing on fairy dust. With this much snow, it kind of gives me a good feeling for how the season’s going to turn out.”

“Hopefully we get a lot of pow,” Vermillion added.

Get social with Montana Untamed:
0 Comments
You must be logged in to react.
Click any reaction to login.

Tribes and environmental groups worry that expanded mining at one site — already severely contaminated — will increase contamination near and in a legendary wild river.

There might not be a lot of snow in the backcountry around Missoula right now, but it's deep for mid-November, and just barely deep enough for fun powder skiing in some places. 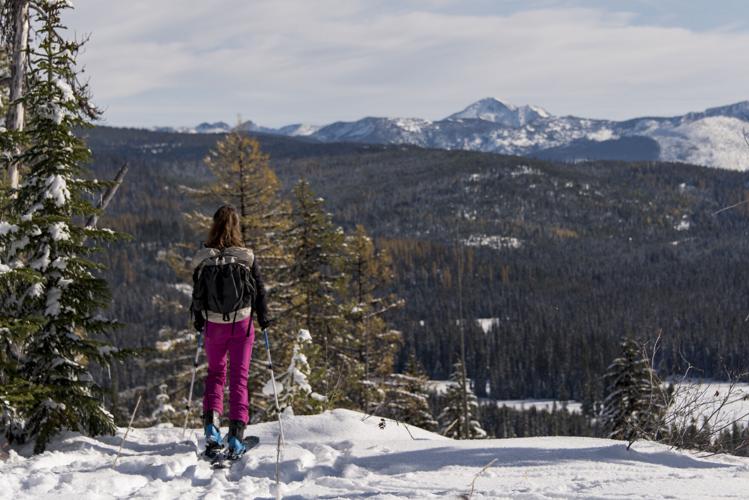 Lolo Pass southwest of Missoula has just enough snow for unusually early backcountry skiing. The skiing might not be the best in mid-November, but the views don't disappoint.

Climbing skins, like this one being applied before a ski tour near Lolo Pass on Nov. 16, allow backcountry skiers and snowboarders to hike uphill. 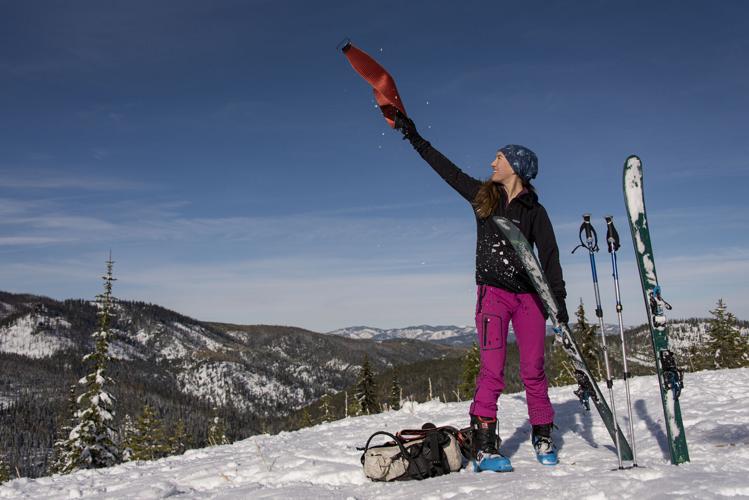 Climbing skins, which allow backcountry skiers and snowboarders to hike uphill in snow, are removed before making turns back down.

Hope Spargo skis through powder in the backcountry near Lolo Pass on Nov. 16.

Backcountry skiers and snowboarders set a skintrack up a powder-covered run at Lost Trail Ski Area on Nov. 13, before the ski area started running its lifts for the winter. 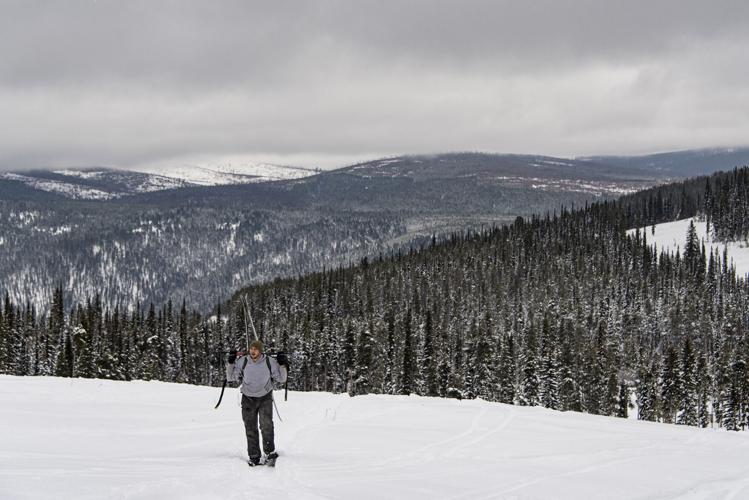 Mitchell Efaw, 28, of Hamilton, snowshoes up a slope in Lost Trail Ski Area on Nov. 13. Efaw brought his skis to the top of the mountain for early-season powder turns before the ski area opens in coming weeks.