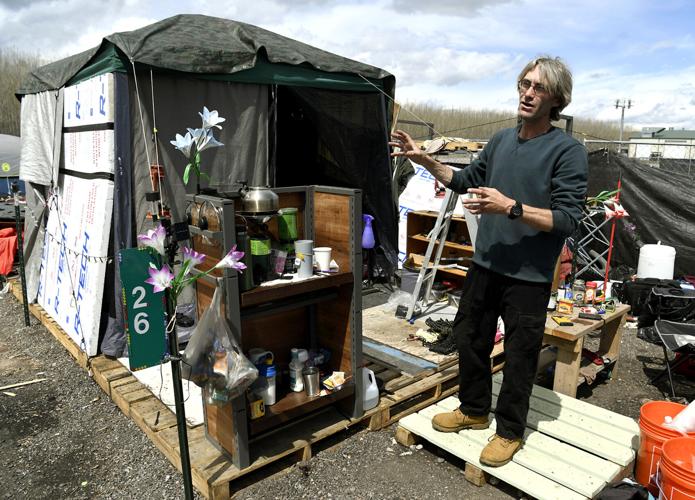 Tully Sanem stands at his site at the Authorized Camping Site on Clark Fork Lane on Monday. Sanem had built a semi-permanent structure from wood pallets to shelter from the weather, but it was dismantled when the city required residents to remove wooden structures and fences. 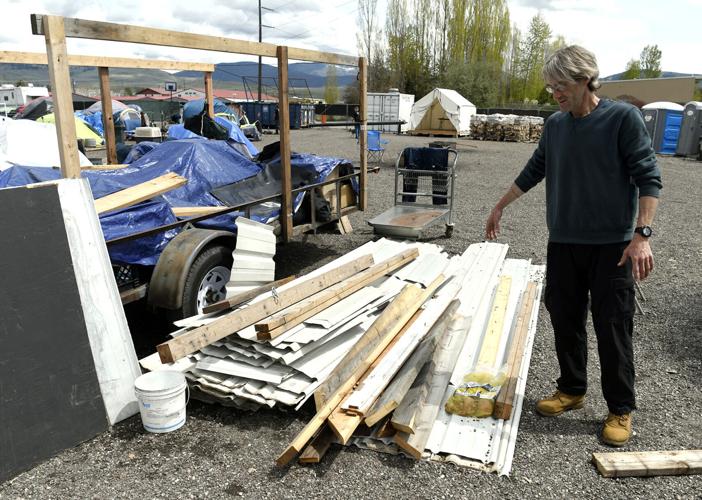 Sanem kept some of the building materials he used for his shelter after it was dismantled.

Tent walls flapped in the cold wind Friday morning where Tully Sanem dozed under a tarp after his pallet-wood walls at the Authorized Tent Camping Site on Clark Fork Lane were dismantled the day before.

Until last week, semi-permanent structures provided residents like Sanem a sense of solidity in the camp’s 40 sites. But a recent notice from the City of Missoula required campers to take down structures and fences. The notice from Missoula Code Compliance also forbade campers from using heating and cooking gear inside the Authorized Camping Site.

“It looked really serene,” Sanem said of the camp before the city order changed the landscape. “It was really nice here…The whole place was fine. People were happy.”

Sanem is one of a handful of campers instructed to dismantle his pallets two weeks ago.

Adam Sebastian, assistant fire marshal at the Missoula Fire Department, said the order was issued to improve safety at the camp.

Cooking and heating apparatuses pose a fire risk, Sebastian said, and the size of built shelters started to impede emergency routes for first responders to gain access to individual sites.

“If everyone’s living on top of each other, it just makes it really difficult,” he explained. “…We want to make sure we limit combustibles.”

Sebastian said the city and county government decided to issue the recent order because they had noticed an increasingly untenable situation at the camp since it opened in January.

He said there has been a difference between “what was intended and what we’re seeing over these last couple months.”

“It’s a tough situation,” Sebastian added. "We’re all trying to do our part to help this population group and maintain a certain level of safety.”

While campers like Sanem say they understand the safety risks at the Authorized Camping Site, they nonetheless feel dismayed at the fate of the structures they built to enhance their campsites. Sanem held out on taking apart his shelter until Rogers International security officers finally started breaking down his pallets on Thursday, May 12.

“It did not look like this until they wanted us to start tearing stuff down,” Sanem said. “And then, slowly, the morale of this place started dropping.”

“I want my comfort,” Sanem said. “I want to be inside. I don’t like living like this.”

“If I ever get myself out of this, I’m never going to camp again,” he added.

The destruction of the structures presented a significant financial loss to campers like Sanem, who invested almost $800 into pallets, nails and tools to build a sturdy apparatus.

“I wanted a structure because I don’t want to be huddling up in five blankets when it’s 15 degrees outside,” he said. “I go out, and I work, and I contribute, and I engage in commerce and I help so many people out. I should not have to live in squalor.”

Beyond the immediate security a structure provided to Sanem, he wanted to use the stability of the building to build a foundation for a better life.

“That’s what you need, a foundation,” he said.

He hoped to build up the structure and use it as a base of operations to potentially start a small business or nonprofit building crafts with the other residents of the Authorized Camping Site.

“I wanted to make it a home because everybody wants a home,” he said.

The situation is especially frustrating, Sanem noted, because he checked with authorities at the camp before moving in about six weeks ago.

“We all had the understanding we could do whatever we wanted to do,” he said.

Sanem said he got the go-ahead to build a structure out of pallets before he even moved into his site at the camp, and he even asked if he could erect a two-story structure. He said he was under the impression all of his building plans would be allowed.

Sebastian said camp supervisors only recently started enforcing regulations about the structures because the buildings made out of pallets were becoming a safety concern.

Sanem and some of his friends at the site say they would not have moved in if they had known tent camping would be their only option.

“After you spend 20 years in a tent, you get really sick of living in a tent,” said a resident who goes by “Shadow.”

Adding to their discomfort, campers are no longer permitted to use heating and cooking gear like the small propane stoves many residents rely upon to prepare meals on the ground outside their tents.

Sebastian with the Missoula Fire Department said authorities overseeing the Authorized Camping Site are looking into alternative solutions to allow for cooking and heating inside the camp. He said they are considering the addition of communal cooking apparatuses like hibachi grills, charcoal burners and gas-fueled devices.

But until those mechanisms go into place, campers who lack transportation have few options when it comes to food.

When Sanem left the Authorized Camping Site in his truck Friday afternoon, another camper begged him to fill up her bottle with hot water from a nearby gas station.

With his truck, Sanem has relative mobility compared to most of his neighbors. Now that the structure he spent weeks working on has been reduced to firewood, Sanem is contemplating using that truck to migrate out of state.

He says the dismantling of his site might be the final straw in the string of challenges he’s faced over a year and half of living without a house. Even though he works a job building decks and utilizes resources like the Authorized Camping Site, the Johnson Emergency Winter Shelter and the Poverello Center, Sanem doesn’t feel there is enough local support to keep him afloat if he stays in Montana.

“I’m lost now,” Sanem said. “I really don’t know what to do now…It’s one hardship after another.”

City officials credited coordinated efforts with saving lives during a Wednesdays with the Mayor discussion this week at the Missoula Public Library.

Montana Constitutional community discussion to be held May 23

Leadership Montana, the Mansfield Center and the League of Women Voters are collaborating to create an interactive experience to celebrate the 50th anniversary of the Montana Constitution on May 23.

The county commissioners first put the declaration into place on Thursday, May 12, and the Tuesday authorization keeps it active indefinitely.

Ten neighbors to the subject property raised their issues with the project, and a petition against the proposal received more than 20 signatures.

Unbelievable! This is the moment after a gunman opened fire in a crowd in Philadelphia

Tully Sanem stands at his site at the Authorized Camping Site on Clark Fork Lane on Monday. Sanem had built a semi-permanent structure from wood pallets to shelter from the weather, but it was dismantled when the city required residents to remove wooden structures and fences.

Sanem kept some of the building materials he used for his shelter after it was dismantled.