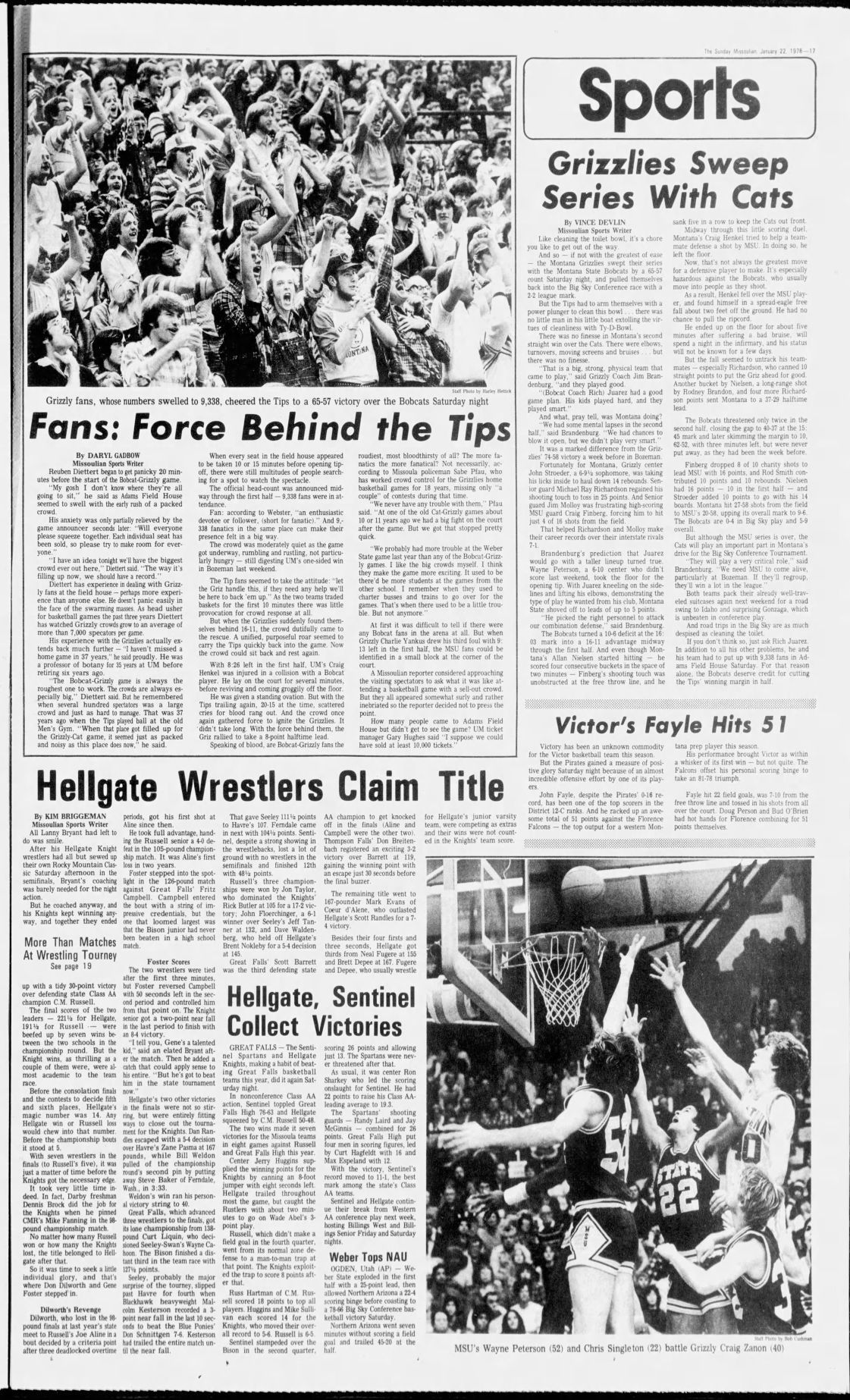 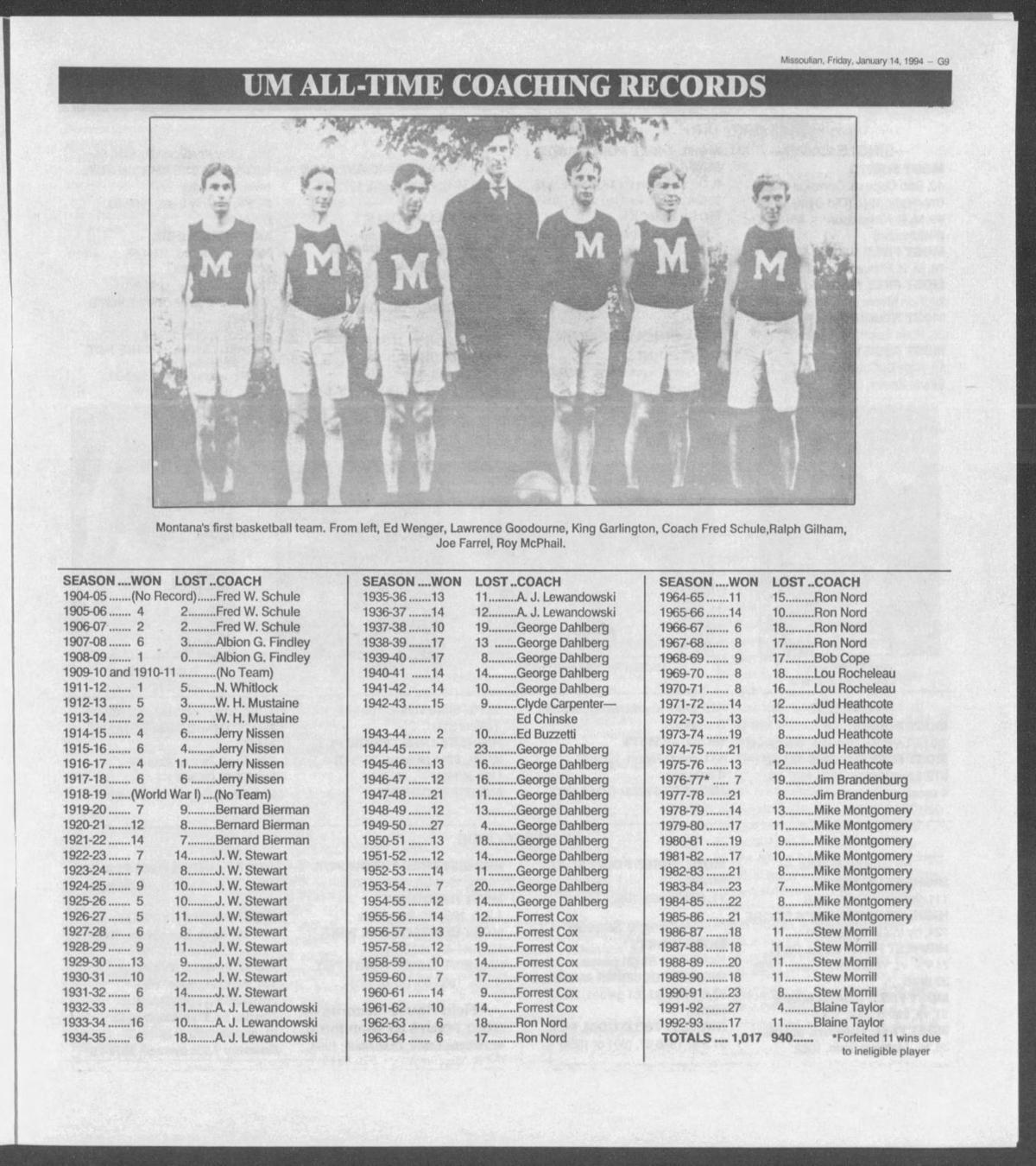 The future first congresswoman, suffragette and peacenik played for the University of Montana’s Collegiate team, which dispatched the Preparatories by an 18-15 score.

That was in June 1901, a feature of the annual field days at UM. More on that game later.

The first basketball coach quote appeared five months later, when Miss Fudge and her Butte High School team came by train to Missoula to play the ‘Varsity women. The "smoky city" quintet was drubbed 26-2, Butte’s only points coming at the start due to a misunderstanding of who was shooting at which basket.

"University played a fair and square and splendid game,” Miss Fudge said afterward. “We were considerably put out by a different conception of rules in practice than that of 'varsity and that required by the umpire.”

We found no report that Miss Fudge was subjected to league sanctions for her incendiary remarks, maybe because there was no league.

Such newspaper gems came as sidelights in a search of Missoulian archives for the first Montana-Montana State men’s basketball game.

The Grizzlies and Bobcats, as they’re known these days, meet for the 298th time Saturday in Bozeman. For the first time in the history of the series that turns 113 years old, the Missoula boys lead, 149-148.

Though the Brawl of the Wild football rivalry dates back to 1897, the schools didn’t meet on the hardcourt until Groundhog Day 1906.

That game story began: “Briefly, this is the story of one of the best basketball games ever played in the Garden City; Bozeman, 39: ‘Varsity, 32. Bozeman, excellent team work, snappy playing, poor basket throwing and just a little bad luck. Missoula, first-class basket throwing, earnest work and a little lax on team work.”

Forward Roy McPhail of New Chicago near Drummond had 18 of the home team’s 32 points and King Garlington of Missoula scored 8 more. Will Hartman was the scoring standout for the visitors from Montana Agricultural College with 21 points.

There was no way of knowing at the time how thoroughly Bozeman teams would dominate the early series. They won 15 of the first 18 meetings with UM through 1918 and held an advantage of 57-43 after 100 games, when the schools took a year off in the midst of World War II.

Recently Griz teams have made a rush, finally catching and passing the Cats with two wins last season. They enter Saturday’s game on a 15-1 run against their in-state rivals.

UM got off to the rocky start under the coaching of a defending Olympic hurdler champion.

Fred Schule of the University of Wisconsin won the gold medal in the 110-meter hurdles at the 1904 games in St. Louis, held in conjunction with the World’s Fair.

In May 1905 Schule took time off his job as mining engineer in Utah to put on a hurdles demonstration in Missoula at the high school interscholastic meet. By July, he was hired by UM as “director of gymnastics,” which at the time meant coaching the football team and getting a men’s basketball program going.

“He is an expert chemist and bacteriologist and in addition to his duties in the department of athletics, will give instruction in some of the scientific departments of the university,” the hire story said.

Schule’s tenure at UM lasted until July 1907, when he left to take another mining job in Goldfield, Nevada. His football teams went 4-7 in three seasons. His basketball teams were 6-4, with all four losses coming to the Agricultural College from Bozeman.

The archives of missoulian.newspapers.com go back to 1890. Run a search for “basketball” and you get no hits until 1901. But “basket ball” starts popping up in 1897, usually in relation to women’s athletics at UM.

“The ladies have received their basket ball material, and are making active preparations for indulging in the game,” the Missoulian reported on May 24 of that year. “Lack of proper grounds has been a hindrance in the way of indulging in games, but the students are active in making suitable grounds, and another year will see some forward movement in athletics.”

Fifteen years later Rankin would become the first congresswoman in the United States. But in 1901 she was joined in the lineup of the Collegiates by little sister Hattie Rankin at center and guard Margaret Ronan, daughter of Mary and the late Flathead Indian agent Peter, who respectively have a lake and a town in western Montana named for them.

There was no statistical breakdown of that historic Field Day scrimmage with the Preparatories, but we can assume (can’t we?) that as one of two “ball throwers” Jeannette Rankin must have had a hand in at least some of the 18 points.

Neither Rankin sister was on the ‘Varsity roster that November when Miss Fudge and Butte High came to town for some outdoor hoops.

“For no other reason than that the young women of the University club played much superior basket ball, the natty blue uniforms of the Butte High School players were trailed in the dust of defeat at the athletic field of the university grounds yesterday afternoon, the score being 26 to 2,” the Nov. 17, 1901, game report read.

“It is probably true that more than one-half of the fair-sized audience … had never before seen basket ball played or knew a single thing about proper or improper play. Nevertheless all were satisfied and impressed with the fact that the game presents many opportunities for excellent exercise not contained in other contests.”

Digging up the past of a Missoula roadhouse, ad by ad

Memories and ads are about all we have to go on in the Missoulian archives to trace the rise and fall of the Casa Loma.

Jeannette Rankin left Missoula more than a century ago and made a name for herself in state and national politics.

Aber Day: A spring day to remember on UM campus

Monday is Earth Day, which has been a thing here and worldwide since 1970.

A century and more of J.C. Penney in Missoula

Hard not to shed at least a little tear of nostalgia for the imminent closing of the J.C. Penney store in Missoula's Southgate Mall.