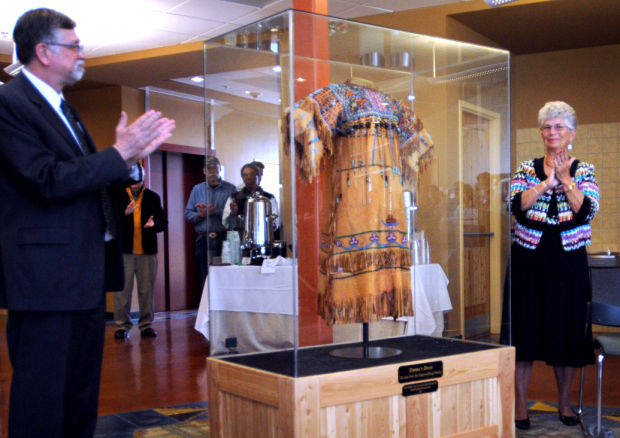 “Our family’s oral history was all about the dress and the basketball team,” said Beverly Braig, right, after unveiling the dress made by her grandmother, Emma Sansaver, during a ceremony Monday afternoon at the Payne Family Native American Center on campus. Braig donated the dress to UM so others could learn from Emma’s story. 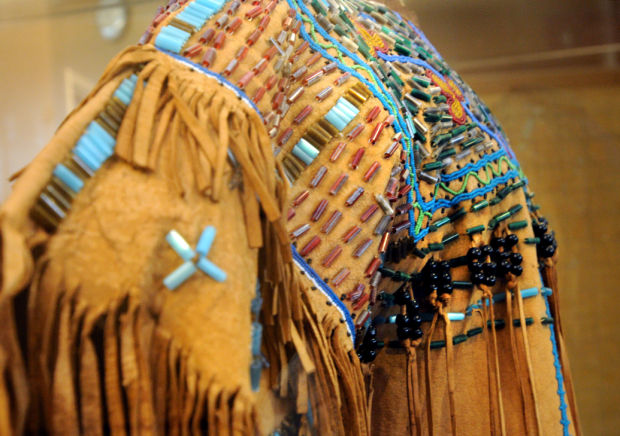 Emma made her dress back in 1904 using commercially tanned leather and hand-embroidered with seed and bugle beads.

The blue-beaded ceremonial dress has spent the past century in Beverly Braig’s home, reminding her of the woman who wore it during halftime fundraisers at the turn of the 20th century.

While Braig never met her basketball-playing grandmother, Emma Sansaver, her beaded dress has become something of a legend, remembering one of Montana’s greatest athletic achievements and moments of human triumph.

“She was on the world championship Indian women’s basketball team at Fort Shaw that played in the St. Louis World’s Fair,” Braig said. “My hope is that Emma’s dress will cause a conversation that will be a positive influence on Native students, especially women.”

To whoops and cheers, the dress was unveiled Monday at the University of Montana’s Payne Family Native American Center. Sansaver stitched the leather dress by hand, as did other members of the Fort Shaw Indian women’s basketball team. They wore the ceremonial dresses during halftime performances as a means to raise money to support their travels and fill their equipment needs.

“This dress was a point of conversation in our house,” Braig said. “It was the one thing of pride my dad had on the family.”

Born in 1886, Sansaver was placed in the Fort Shaw Industrial Indian School as part of a federal policy aimed at assimilating Native Americans into the nation’s predominantly Euro-American culture.

There, she made the Fort Shaw Indian women’s basketball team, itself comprised of women from several tribes. Sansaver was partly Chippewa-Cree.

The boarding school closed in 1910 and the success of the women’s team was nearly forgotten until recent years. Books like “Full Court Quest” and documentaries such as “Playing for the World” helped revive their story, though Braig has never forgotten it.

“For me, my grandmother is emblematic, in that the experience of boarding school didn’t harm her, but rather it inspired her and thrust her forward,” said Braig. “We’re still talking about her 110 years later.”

Cheyenne Laue, a graduate student in anthropology at UM, was charged with researching both the dress and Sansaver’s story prior to Monday’s unveiling.

She went into the research project knowing little about the Fort Shaw team and the experience of its members, though she came away with a heightened respect for what the women achieved.

“I was inspirited by the strength and courage of Emma and this group of Native women,” she said. “They were able to excel academically and in their sport, in spite of the enormous obstacles they encountered.”

Laue said the women were introduced to the sport by a Native assistant at the boarding school who learned of this new thing called “basketball” on the East Coast. The sport itself was just getting started and had yet to catch on in rural Montana.

Early on, the team didn’t have a regulation basketball or nets to shoot at. Overcoming the financial barriers would be an uphill climb throughout the team’s existence. Being both Native American and female athletes, the players were the target of derogatory comments slung by commentators and spectators alike.

But the young women only rose to the challenge.

“Their coach just happened to arrive at the boarding school at a time when all these great women players were together at the same time and place,” said Laue. “It’s rumored they defeated both men’s and women’s teams, including UM and Montana State University. They were just really, really good.”

Sansaver’s historic dress will be displayed in the Native American heritage collection in a climate-controlled case, funded by Grizzly Riders International, a 49-year-old branch of the UM Foundation.

Braig hopes her grandmother’s dress inspires students to excel despite the barriers they may face.

“I want the dress to be on display, not as an ancient relic, but as an inspiration to Native students and all students,” Braig said. “This little girl, who was taken from her family to the boarding school and made a life for herself – her spirit still lives 110 years later.”

As the United States celebrates electing a black man to the White House for the first time, a new book looks at how 10 girls and young women m…

Whether visiting buffalo jumps or scavenging for arrowheads on the plains near his boyhood home in Outlook, Robin Selvig has been fascinated w…

By most accounts, few if any of them had ever even touched a basketball before they arrived at Fort Shaw, 25 miles west of Great Falls.

Watch Now: Should my kid get the COVID vaccine?

“Our family’s oral history was all about the dress and the basketball team,” said Beverly Braig, right, after unveiling the dress made by her grandmother, Emma Sansaver, during a ceremony Monday afternoon at the Payne Family Native American Center on campus. Braig donated the dress to UM so others could learn from Emma’s story.

Emma made her dress back in 1904 using commercially tanned leather and hand-embroidered with seed and bugle beads.