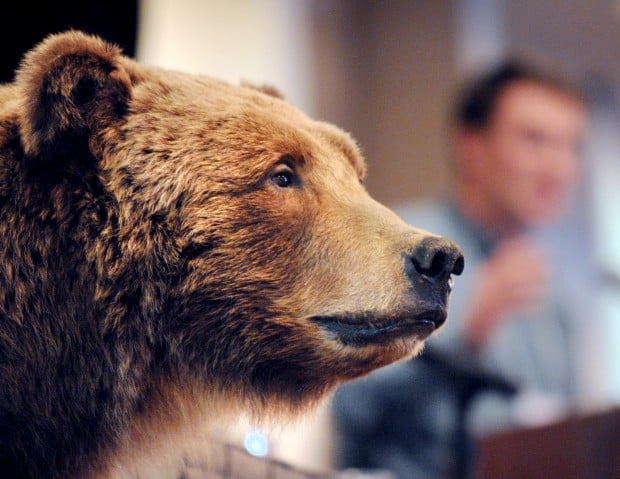 Much of the discussion at the fourth International Human-Bear Conflicts Workshop on Wednesday at the Double TreeHotel in Missoula centered around the type of fence that works best in keeping bears out of human habitat. 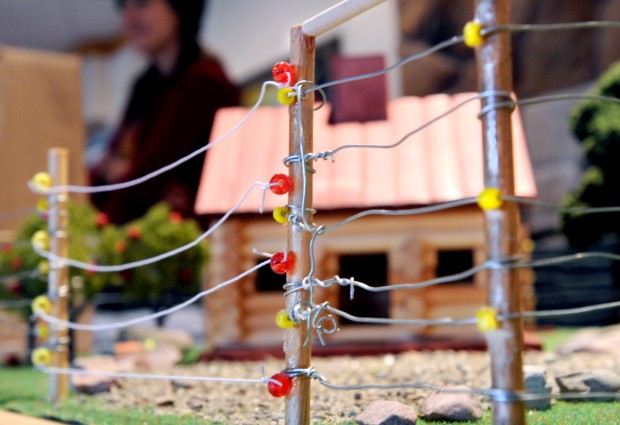 Patti Sowka of the Living With Wildlife Foundation built scale models to show landowners how good fencing can protect their home and livestock. The models will be given to bear specialist Jamie Jonkel of the Montana Department of Fish, Wildlife and Parks to use in his education program.

The video makes dramatic evidence: A big sow grizzly and her cub approach a freezer in a Flathead County garage. The night before, they’d scored a load of frozen fish. They were back for more.

But this time, the sow steps on an electrified cattle mat placed in front of the freezer. She gives a startled “Woof!” and wheels away.

The little bear gapes at mom for a second and seems to say ‘Yikes, wait for me!’ The family group was soon trapped and relocated, and hasn’t been in trouble since.

The use of electricity as a bear repellent has reached a level of effectiveness and creativity far beyond what was first deployed about 20 years ago, Manley said. Outfitters have charged horse trailers to protect grain supplies. Communities have wired garbage cans. Family ranchers have fenced play yards to ensure their children are safe from both bears and zaps.

At the fourth International Human-Bear Conflicts Workshop in Missoula, more than 300 bear experts got an update on the state of the electrifying art on Wednesday afternoon. Mike Madel, who manages bears along the Rocky Mountain Front for FWP, said a five-year effort with the U.S. Forest Service and Blackfeet Tribe worked out many of the bugs for using electric fencing in the field.

“They were using livestock carcasses for attractant,” Madel explained. The research showed how tight wires must be to get under the fur of a curious grizzly bear. It tested the usefulness of chicken wire good for sheltered coops – bad in breezy places where it catches windblown brush and shorts out. It worked out the kinds of solar panels that can keep a 12-volt battery fully charged 24 hours a day.

Fence design also faced challenges. Wires need to run across the top to deter adults, but should also be strung close to the ground to stop crawling cubs. Entries vary. Sheep herders like gates, while beekeepers like panels. Portable systems need to be lightweight but not so flimsy that wires twist together.

The fence systems use pulses of electricity, so the victim gets shocked but can let go and get away. Madel said it’s much different from a set of jumper cables or sticking a finger in a light socket.

“That would kill something,” Madel said. The fence systems deliver about 7,000 volts of electricity per zap – enough to scare off big bears, wolves and cattle.

Electrifying has become a tactic for homeowners in bear country. Kevin Wright of the Colorado Division of Wildlife said many residents in the hills around Aspen have started placing mats below their windows and doors to keep bears from breaking in. In years when natural food supplies fall short, Wright said his wardens can field more than 20 incidents a night.

Fencing systems cost around $300 and up, depending on the size and complexity. The nonprofit group Defenders of Wildlife has contributed more than $200,000 to subsidize private fencing projects, and currently offers grants paying 50 percent of the project cost up to $500.

Ranchers and sheep herders have been quick to adopt the fences, while smaller operations like the ones that raise chickens or goats have been slowly coming along, according to Erin Edge, the group’s Bear Aware coordinator. In addition to solar cells, some people have had success with wind turbines in places with less sunlight.

“Every single fence is a different situation,” Edge said. “It’s picking up each year since we started the program.”

Western Montanans have long known the challenges of dealing with bears that rummage through trash and wreak havoc on chicken coops. But lately…

Hunting may not be the tool wildlife managers hoped for to keep black bears from burgling garages and garbage.

Bear spray doesn’t supply “brains in a can” to survive a grizzly attack, but it appears to work a lot better than spraying bullets.

Much of the discussion at the fourth International Human-Bear Conflicts Workshop on Wednesday at the Double TreeHotel in Missoula centered around the type of fence that works best in keeping bears out of human habitat.

Patti Sowka of the Living With Wildlife Foundation built scale models to show landowners how good fencing can protect their home and livestock. The models will be given to bear specialist Jamie Jonkel of the Montana Department of Fish, Wildlife and Parks to use in his education program.