Bears in school: Seeley students get lessons in bear safety
0 Comments
Share this
{{featured_button_text}}
1 of 2 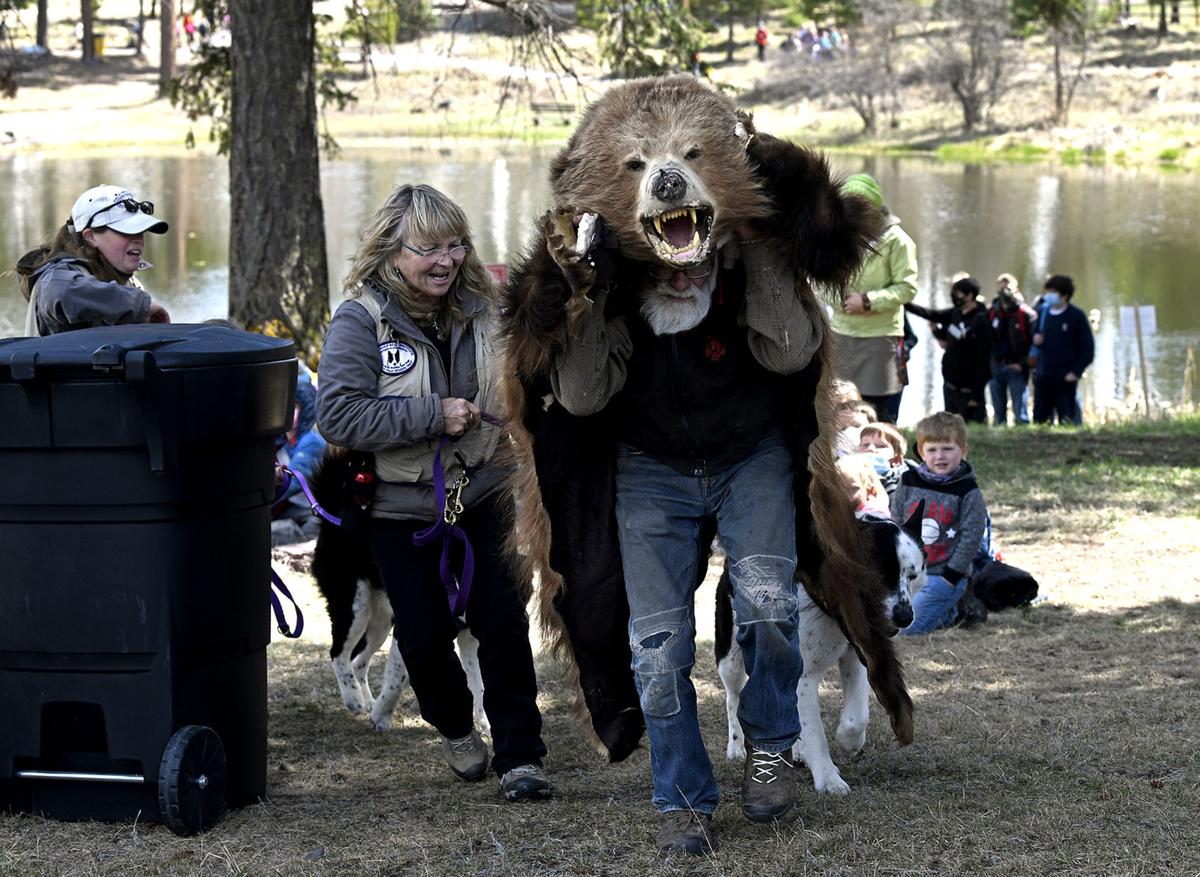 A grizzly bear played by Gary Aitken runs away from Carrie Hunt and her Karelian Bear Dogs during a bear workshop for Seeley Lake Elementary students on Tuesday. 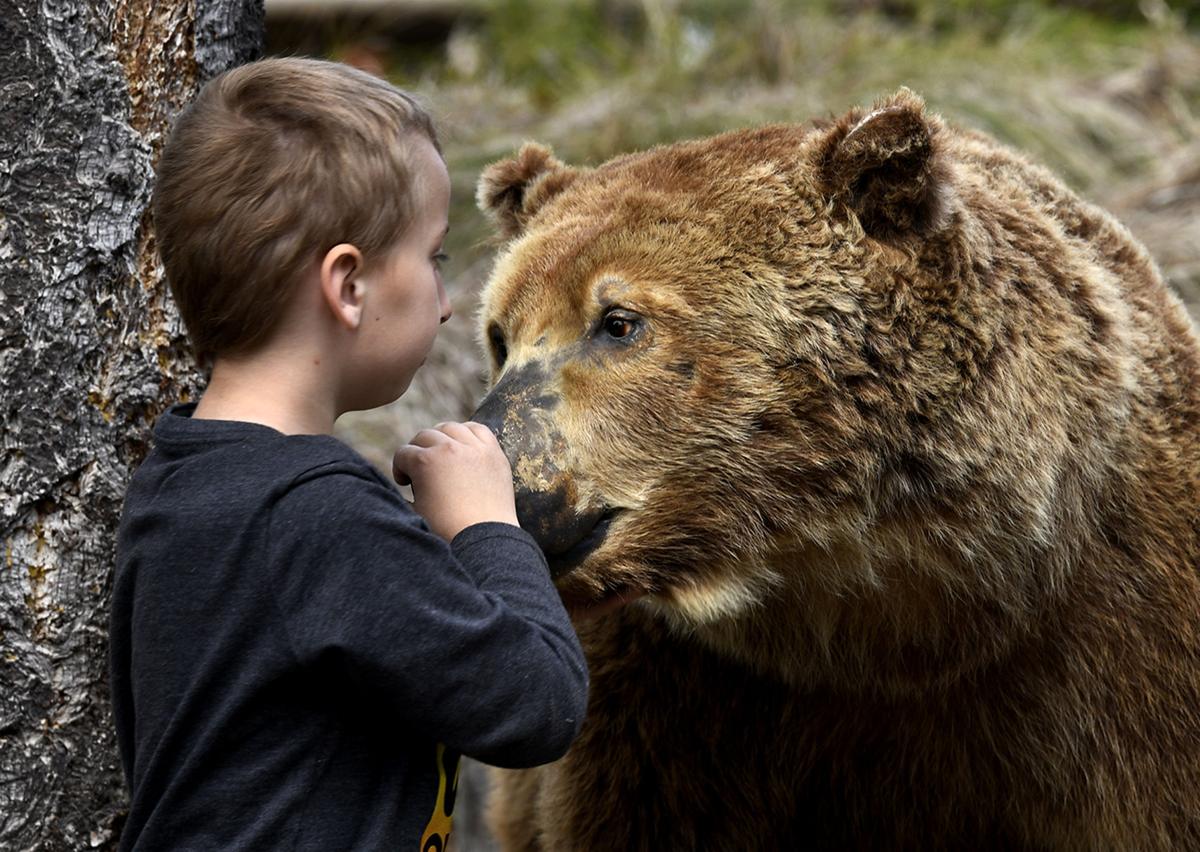 Seeley Lake Elementary first grader Nathan Connell gets an up-close view of a grizzly bear mount during the workshop on Tuesday.

SEELEY LAKE — Being a grizzly bear can be a pain in the neck.

Literally, as Gary Aitken found out on Tuesday while acting as a garbage-seeking griz before a class of rapt Seeley Lake Elementary School first graders. He was part of a skit with Wind River Bear Institute biologists Carrie Hunt and Jessica Reyes demonstrating the kinds of trouble people entice bears into by leaving bird feeders and dog chow unsecured.

“If it wasn’t so heavy, it wouldn’t be so bad,” Aitken said of the grizzly bear skin and skull he wore in his role. “It weighs more than my neck was designed to carry.”

But the bears are a figurative pain in the neck for both biologists and residents of western Montana, where each encounters the other with increasing frequency. Tuesday’s all-day workshop for all elementary grades exposed the school kids to a variety of bear stories, natural histories and even career opportunities in wildlife management.

“These last couple summers we’ve had more human-bear conflicts than ever,” said Seeley Junior High math and science teacher Patti Bartlett. “Our average is 10 or 12 a summer. Two years ago, we had 80.”

Two years ago, Bartlett helped put together a bear-aware art project for the younger students, whose pictures and sculptures of bear safety advice got displayed all over town. That got the parents and neighbors out looking for their children’s artwork, with the side benefit of spreading the word about the town’s bear responsibilities. Bartlett said the influx of newcomers, general economic difficulties and robust bear numbers demanded a wider response.

“Communities change,” Bartlett said. “You get complacent, and you get new people who don’t know the habits of the animals around the community. We live in a really rich habitat, and we need to learn how to co-exist.”

Ryan’s storytelling sessions braided ancient lore with contemporary resonance. Whether by reflex or design, his recounting of how a spirit grizzly bear helped a young man survive a smallpox outbreak through quarantines and social distancing, Ryan kept saying “COVID” when he meant to say “smallpox.”

“There’s an incredible amount of knowledge kids pass on to their parents,” Bartlett said. “I was in the store when this lady came up to me and said, ‘My grandson made me take my bird feeder down.’”

Missoula bears on the prowl

Bear problems aren’t limited to the backcountry, as Missoula’s residential neighborhoods have been learning this spring.

“In the Rattlesnake, we’ve got four or more bears, although only one has been getting into garbage,” said Montana Fish, Wildlife & Parks bear manager Jamie Jonkel. “In Grant Creek, we’ve got five or six, with one of them getting into bird feeders. In the Milltown-Bonner-Piltzville area, I’ve got five bears tuned in to garbage. And at the base of Mount Sentinel, last fall we had two bears that have turned into professional garbage seekers. They know when the trash is put out, and then they come down and hit all the alleys and head out through the golf course.”

Missoula has a city ordinance requiring special care of garbage and other wildlife attractants in a “bear buffer zone.” That encompasses most of the eastern fringe of the city neighborhoods that abut or spread into the surrounding hills from Grant Creek clockwise to Miller Creek. Residents there can be ticketed for failing to keep garbage in a bear-resistant container or enclosure, and for leaving those containers out any time other than the daylight hours of their garbage pick-up day.

Black bears, which are smaller than grizzly bears but still pose a serious safety hazard to people and pets, are adept at pulling down bird feeders, opening chicken coops, raiding dog dinner bowls and plundering other concentrated food supplies. Jonkel said one of the Mount Sentinel black bears got into a truck and pulled out a large compost bin, which it then tore apart. Bears that get accustomed to human food may become extremely brazen in their approach to people, which can result in people getting hurt and the bears getting killed in management actions.

For more information about bear-proofing yards and garbage, check out missoulabears.org.

To see a video from the bear safety lesson in Seeley Lake, visit this story online at Missoulian.com.

The tallest cliff in the Solar System is one steep drop

The tallest cliff in the Solar System is one steep drop

WH turns focus to getting Under 30 vaccinated

WH turns focus to getting Under 30 vaccinated

Psaki: The fight for voting rights 'is not over'

Psaki: The fight for voting rights 'is not over'

As they come out of their hibernation dens this spring, Montana grizzly bears awaken to a churning political landscape.

This Earth Day, take a look at the Earth.

Claiming that grizzly bear recovery must be “determined by science, not by activist judges,” Sen. Steve Daines renewed his effort to delist grizzlies in the Greater Yellowstone Ecosystem on Thursday.

Feud breaks out among GOP lawmakers over Snake River dams

Some members of Congress are accusing an Idaho lawmaker of conducting secret negotiations with the governor of Oregon over a controversial proposal to breach four dams on the Snake River to save endangered salmon runs.

'Normal' weather gets an official update

The old joke states that if you don’t like Missoula’s weather, wait five minutes.

Information on how to join the meeting will be posted at fs.usda.gov/lolo#wam, and a meeting link and call-in phone number will be made available one day prior to the meeting at this location.

Grizzly bears and bull trout will lose much of what they gained from decades of protection in the Flathead National Forest if a new management plan gets OK’d, wildlife advocates argued in federal court on Wednesday.

The Interagency Grizzly Bear Committee meets virtually on Wednesday and Thursday, bringing together land and wildlife managers from Montana, Idaho, Wyoming and Washington.

To understand the “Interagency” in the Interagency Grizzly Bear Committee, consider Bear 863.

A grizzly bear played by Gary Aitken runs away from Carrie Hunt and her Karelian Bear Dogs during a bear workshop for Seeley Lake Elementary students on Tuesday.

Seeley Lake Elementary first grader Nathan Connell gets an up-close view of a grizzly bear mount during the workshop on Tuesday.