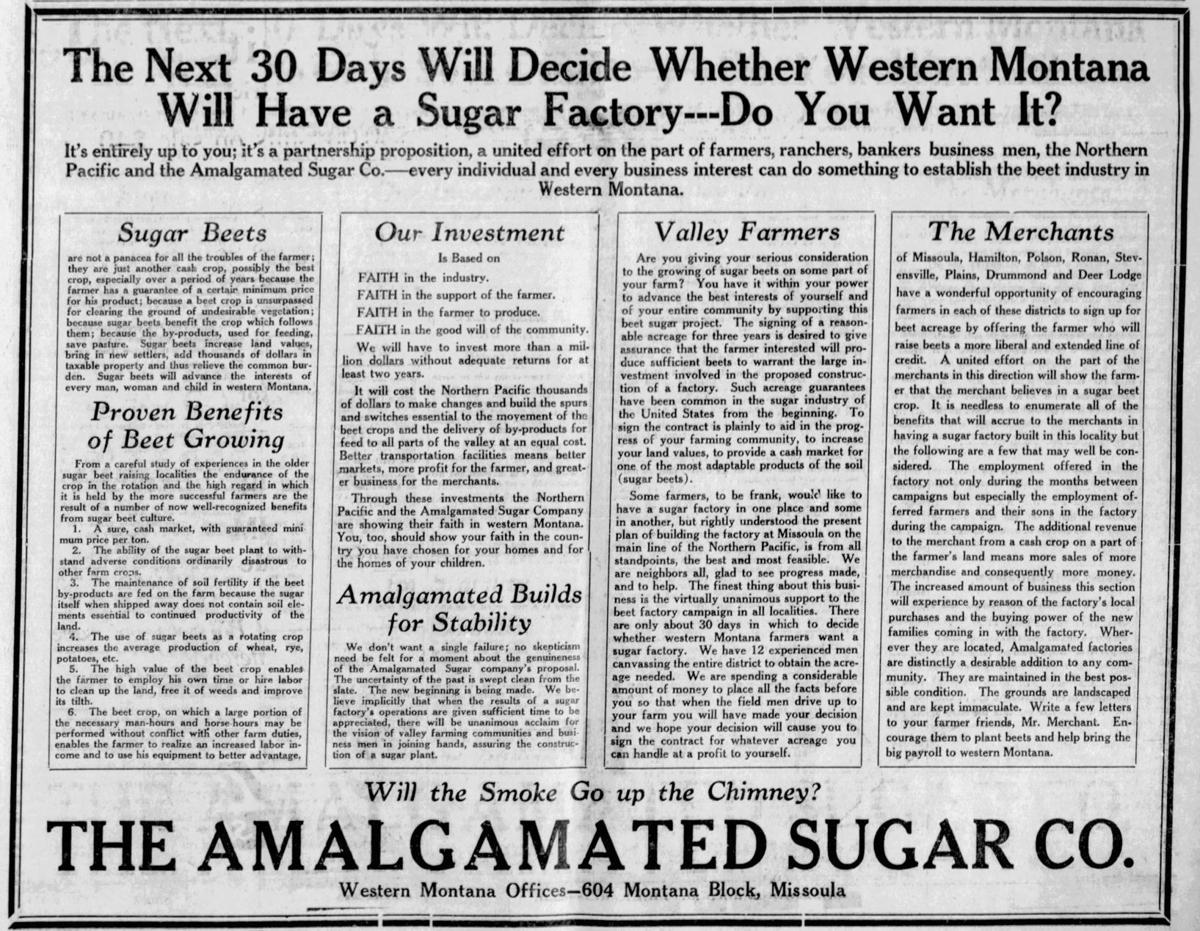 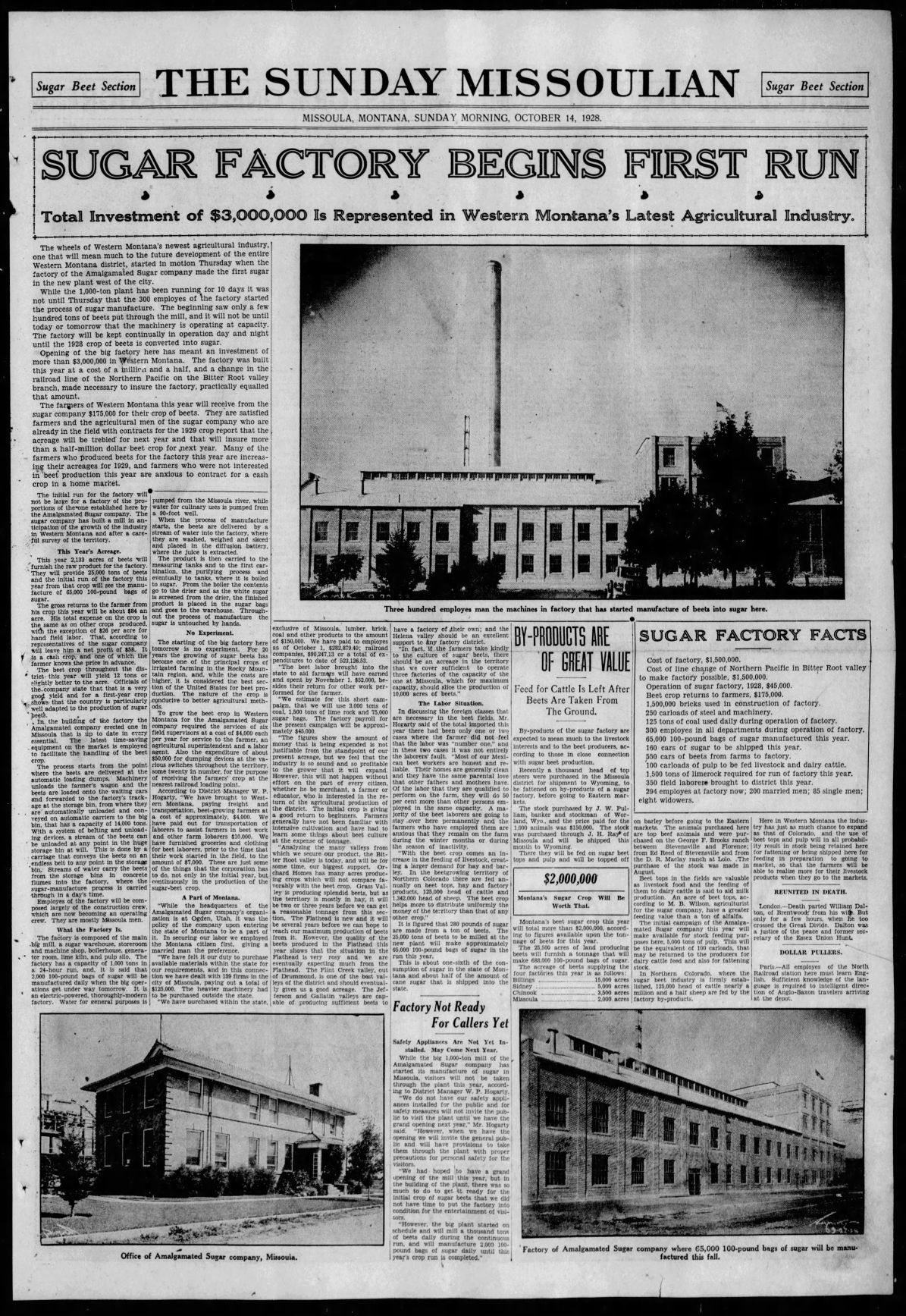 OK, OK. This is about a sugar beet factory and, yes, things are going sour quickly.

But Missoula’s sugar beet factories were a big deal. The first of two spit out its first crystals in 1916. The second, on the same site, fired up in 1928 and was shuttered in 1966.

The plants were west of town, in an area now known as “behind Target.” Edulog, the school-bus software company, renovated and moved its world headquarters into the old brick factory in 1992, and architect Eric Hefty helped the Missoulian’s John Stromnes round up some of the factory’s sugar-making history.

“While in operation, the plant paid nearly $1 million a year to farmers for beets, and about $500,000 in salaries and $250,000 in related supplies to the local economy,” Stromnes relayed. “Many Missoula natives worked at the sugar-beet plant each summer to supplement their incomes or get college money.”

So sugar beets were us, Missoula, through the guts of the 20th century. (How’s that breakfast coming?)

That a sugar beet factory was big news for Missoula is illustrated by the first reference to it in the Missoulian, in 1905 — more than two decades before we got one.

The paper hailed a November visit of one David Eccles of Ogden, Utah, president of Amalgamated Sugar Co. He was in town “for the purpose of interviewing the business men regarding a proposition to establish a beet sugar factory here.”

Eccles posed the same proposition in Hamilton. We won’t attempt to sort out what came of his discussions, other than to say nothing did, in either town.

But the enthusiasm wasn’t lost. A year later, an editorial in the Nov. 10, 1906, Missoulian said the newsroom was “in receipt of a sample of granulated sugar from the Billings Sugar company."

"This is the first sugar manufactured in Montana and was ‘run off’ October 28," the piece proclaimed. "The establishment of a sugar plant at Billings marks the beginning of an industry which in time will become the greatest in the state.”

Finally, in 1916, the Great Western Sugar Co. announced it would build a factory in Missoula in time for the 1917 growing season.

“Without doubt one of the best items of news which this city has ever received,” the Missoulian said.

Due to disagreements between owners and growers, the Great Western plant was operated just one season before it was dismantled, leaving only a smokestack. Amalgamated was still around in 1927 and came courting Missoula again.

“All Together Now — Let’s Build A Beet Sugar Factory” was bannered across a two-page advertisement on July 17 of that year.

“Every farmer in Western Montana should grow sugar beets,” the ad trumpeted. “The crop is relatively certain and the money is ready when the beets are harvested. We know of no other crop which has a determined price at the time the seed is put into the ground.”

Dozens of businesses sponsored the ad.

Some 150 farmers were in attendance at a luncheon in the Florence Hotel on Sept. 27, 1927, when an Amalgamated Sugar representative announced two huge projects in Missoula worth $2 million. His Utah company would build a factory in Missoula in 1928 and the Northern Pacific Railroad would immediately begin work to change its Bitterroot line to accommodate the new factory.

The plant rose over the next year around the old Great Western smokestack. Amalgamated cranked out its first sugar in Missoula on Oct. 11, 1928. By the end of the season a month later, 468 carloads of beets had been delivered to the factory by rail, “besides those that were delivered from nearby points by truck.”

The next year’s production would be three times that, the paper stated.

In the spring of 1936, Amalgamated and the American Crystal Co. traded properties. Missoula’s sugar beet factory remained American Crystal's until it was shuttered for good in 1966. Shrinking acreage and poor weather contributed to the demise. Labor costs had climbed 10 percent in 1963 and another 8 percent in 1964.

“When growers saw the (labor) rate scale this year, they said to heck with it and went to barley,” said the grower association’s president, Norris Nichols of Stevensville.

“Farewell!” mourned a Missoulian epitaph at the start of the 1966 harvest season in September.

“Western Montana will miss the sugar beet industry it has enjoyed — as a cash crop, source of employment and market for transportation, utilities and other supplies — continuously since 1928. With normal year expenditures of about $3 million, the American Crystal Sugar Co. plant will be missed.”

Missoula and the masks of Mount St. Helens

The issue was masks and whether Missoula had to wear them in the face of a health crisis. This was almost 40 years ago.

The Historical Museum at Fort Missoula announced this week it will reopen on June 1 with reduced summer hours, including outside exhibits and buildings on the grounds.