MNF: The latest scores and updates from the Saints vs. Raiders

Bernie Sanders campaigns for Quist in Missoula: 'Now is the time to fight back'
Share this
Return to homepage × 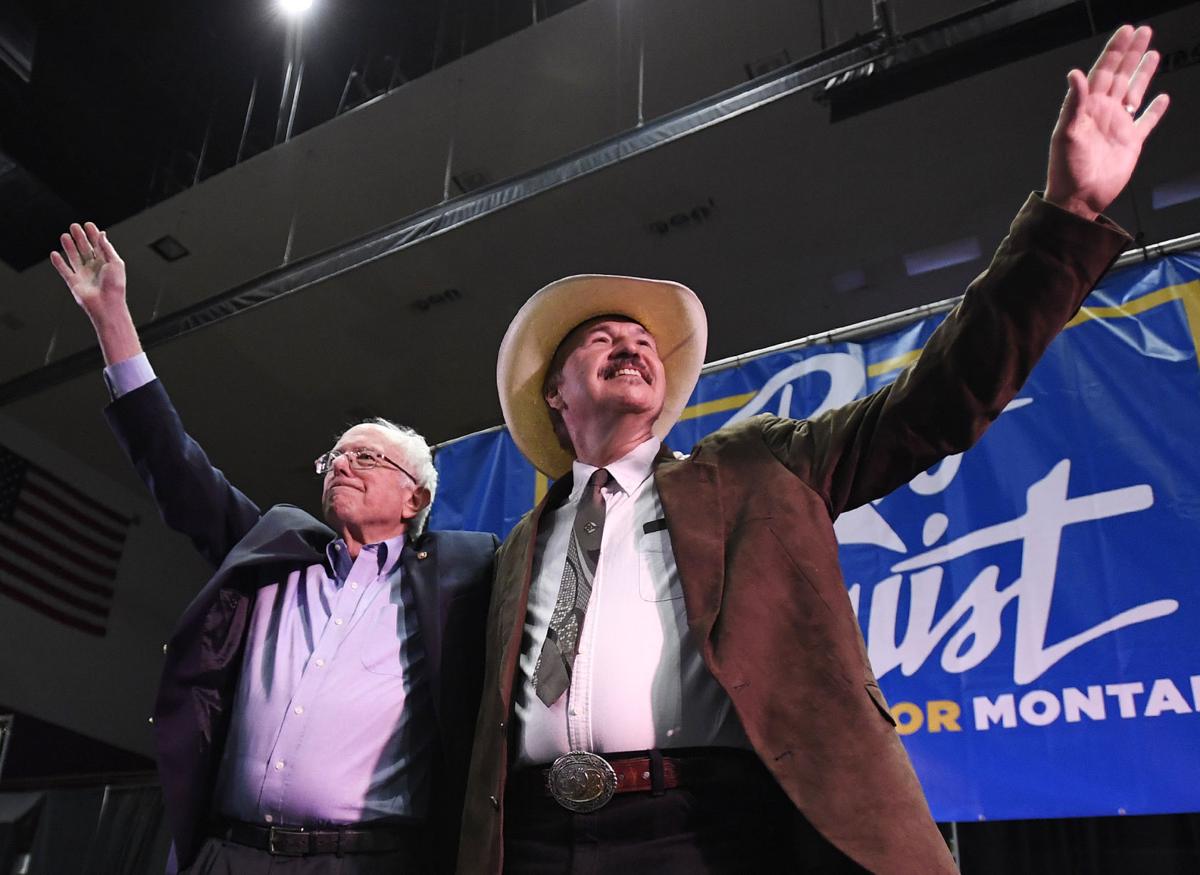 Senator Bernie Sanders, left, and Rob Quist wave to the crowd after the conclusion of Sanders' speech on Saturday in the Adams Center on the University of Montana campus in Missoula. 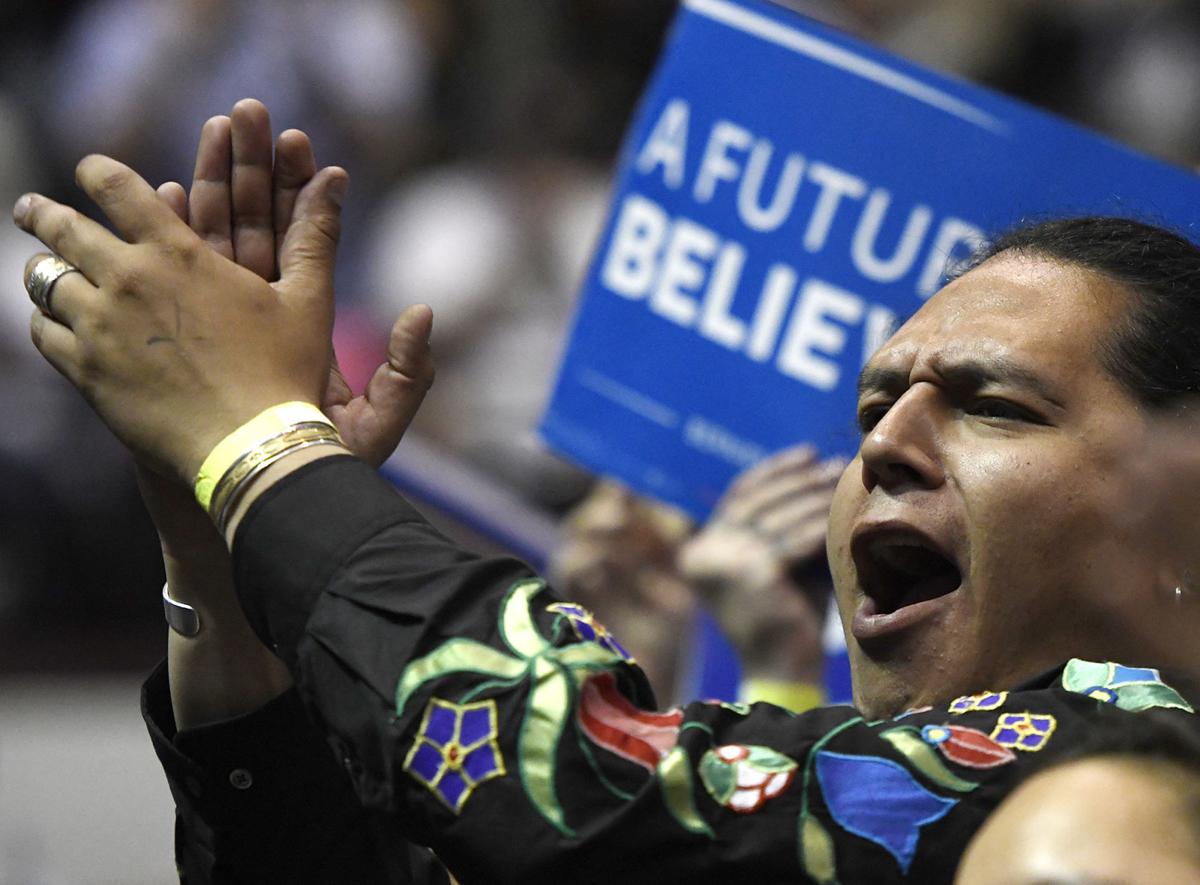 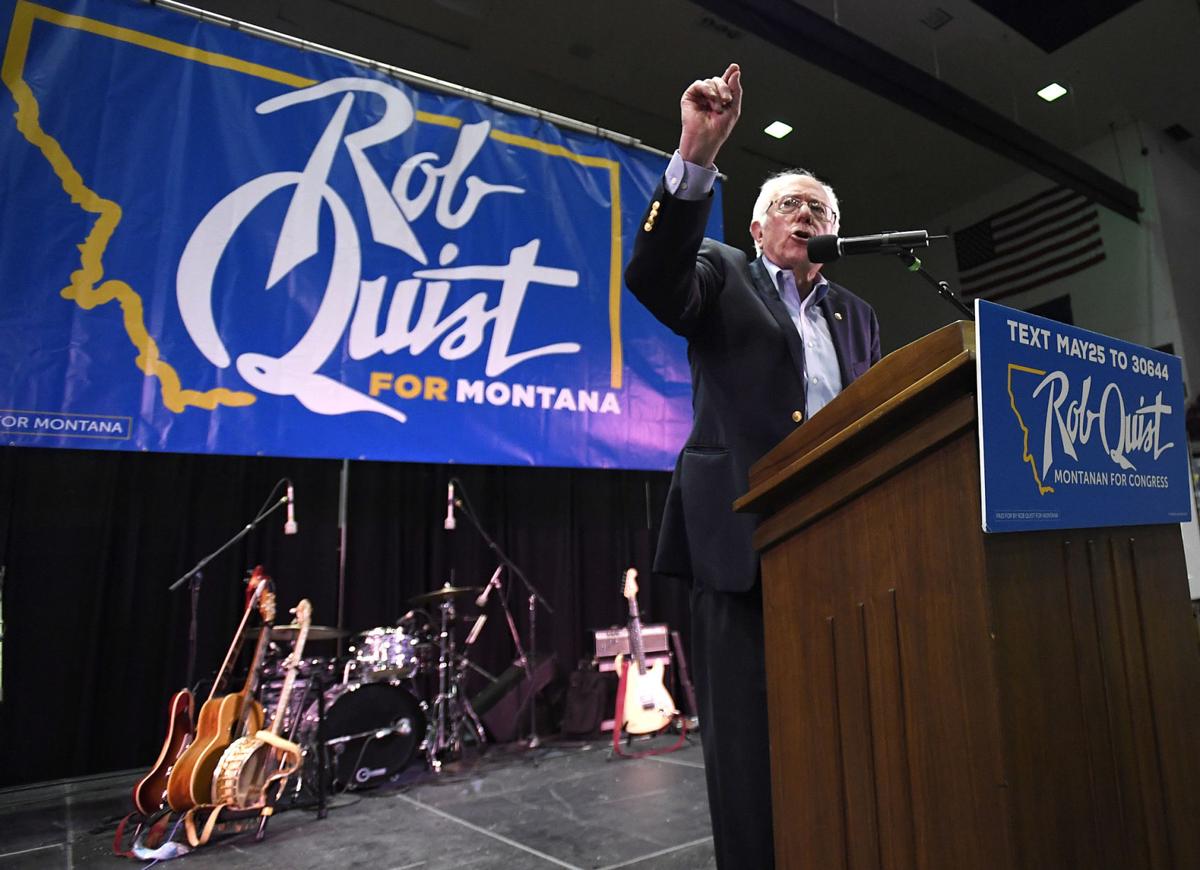 Senator Sanders speaks to the crowd near the beginning of his speech. 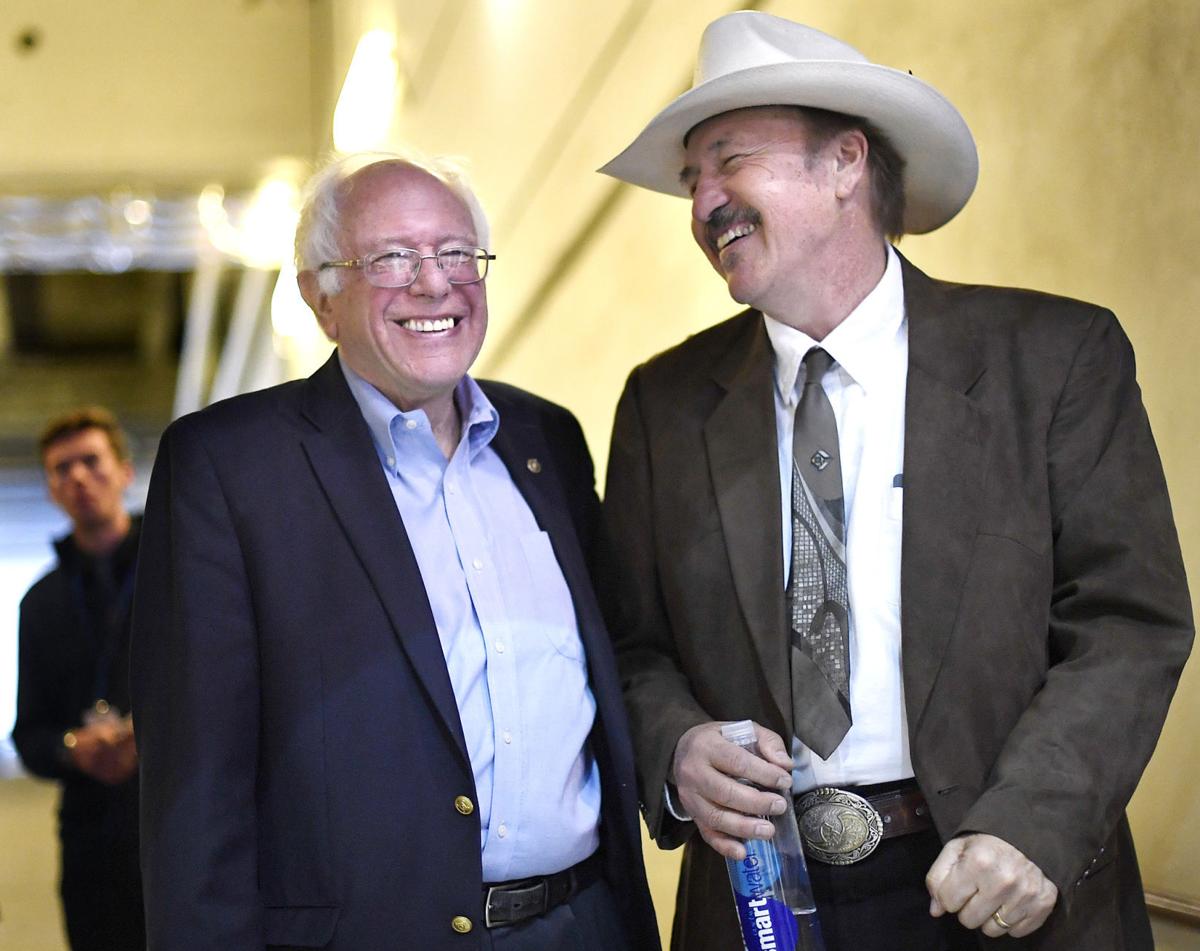 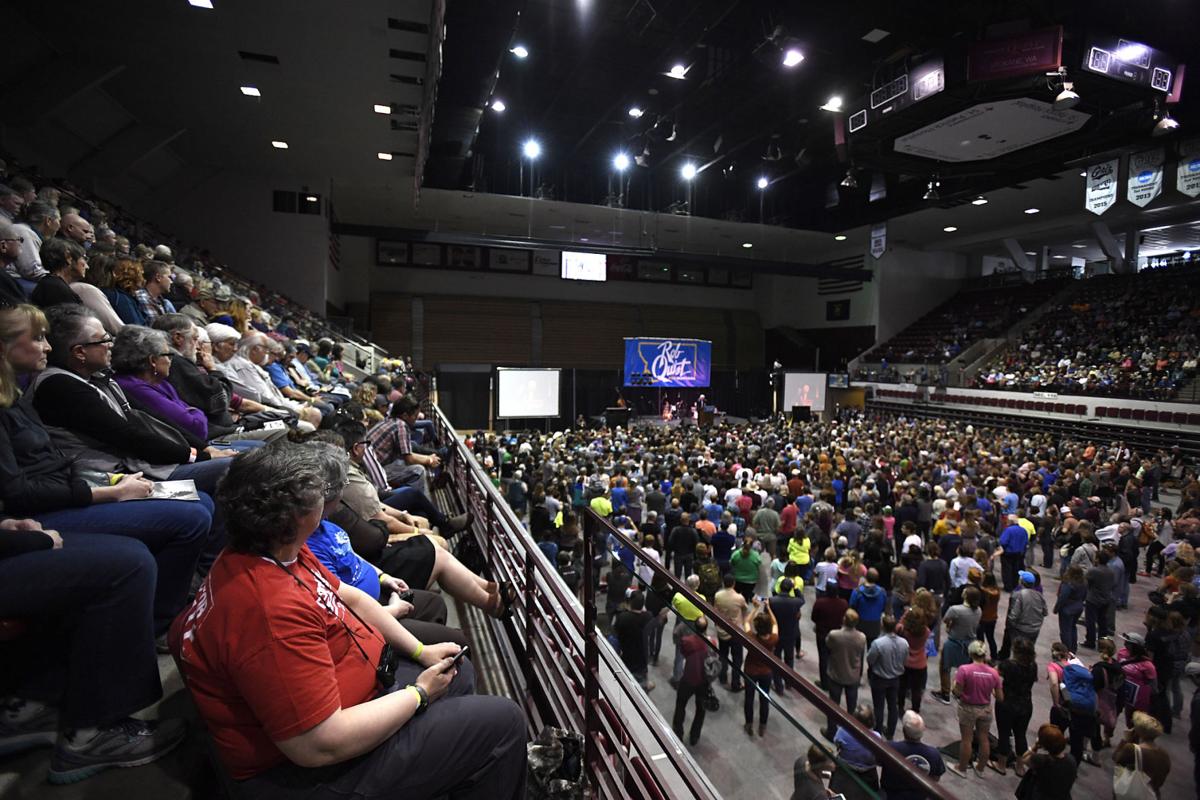 Around 4,000 people attended the Rob Quist and Bernie Sanders rally in the Adams Center.

“These are difficult moments for American people,” Sanders told the crowd in Missoula. “They are throwing their hands up and they are living in despair. What you understand is now is not the time to give up. Now is the time to fight back.”

Sanders, an Independent from Vermont who ran for president in last year's Democratic primary, is in Montana this weekend to campaign for Quist, the Flathead Valley Democrat running against Republican Greg Gianforte and Libertarian Mark Wicks for Montana’s lone seat in the U.S. House of Representatives.

The special election to fill Interior Secretary Ryan Zinke’s vacated seat is this Thursday, May 25, and the contest has attracted the attention of both the national media, and support from national political figures. Gianforte has drawn visits from Vice President Mike Pence and President Donald Trump’s son, Donald Jr.

On Saturday, it was Quist’s turn to get a famous endorsement of his own.

Sanders, who campaigned in Missoula and won Montana’s Democratic presidential primary here, addressed a crowd of roughly 4,000 people at the Adams Center.

“Billionaires like the Koch brothers have spent hundreds of millions of dollars all over this country to elect candidates who will support the wealthy and the powerful,” Sanders said. “And that is why I have so much respect for Rob. Because he is turning his back on raising money that way. His average contribution is 25 bucks. All over Montana people are responding.”

Sanders called the Republican health care bill that recently was passed by the U.S. House of Representatives a piece of “disastrous legislation.”

“That bill is one of the ugliest, most dangerous, most anti-American bills ever passed in the Congress,” Sanders said. “Can you imagine anyone supporting a bill that would throw 24 million Americans, including 70,000 people in (Montana), off the health care they currently have?”

Sanders said Quist would bring a “different moral compass” to the U.S. Congress.

“Rob understands it’s not acceptable that women make 79 cents on the dollar compared to men,” Sanders said. “We have these hypocritical, so-called conservatives saying, ‘Get the government off our backs, we don’t want regulations,’ but these same people are prepared to tell every woman in America what she can do with her body. Rob and I say no way.”

During the event, Quist also spoke, as did his wife and two cancer survivors who expressed the need for affordable access to health care. Quist said he actually spotted his wife for the first time in the Adams Center, when he was playing basketball for the Griz and she was a cheerleader.

“I’m often asked what is the greatest resource we have in the Big Sky and I always say without hesitation it is our strong, independent, smart Montana women,” Quist said.

He used his familiar campaign refrain, that this election is a “fight for the soul of Montana.”

“People like Greg Gianforte see our mountains, rivers and streams and they think, ‘That would be good to own, to fence in and develop,’” Quist said. “And Montanans say, ‘This is our way of life.’ Chief Seattle said many years ago that we do not inherit the earth from our ancestors. We borrow it from our children. There can be no greater truth. And the transfer or sale of our public lands is nothing more than theft against our children and grandchildren, and I promise you I’ll stand fast against it.”

Quist also played guitar, sang and read a poem using a woman’s body as a metaphor for Montana, saying his opponent would “treat her like a harlot.”

“If you are a man of honor, you should cherish and protect her,” he said.

Quist made it a point to attack Gianforte’s failed bid to become Montana’s governor last fall.

“He spent $5 million of his own money trying to buy the last election,” he said. “This should not be his consolation prize. To me this office should not be the millionaire's club. This is the U.S. House of Representatives.”

Katherine Skinner, 65, said she came to the event to support Quist and hear Sanders.

“Quist supports health care for women and public schools and public land ownership and all the things Democrats support,” she said. “Gianforte has a Christian fundamentalist point of view. Not that there’s anything wrong with that, but he shouldn’t impose it on the state of Montana. From what I’ve read, he seems to think that evolution is not preferable to creationism, creation points of view.”

“(Gianforte) is becoming more and more modeling himself after Donald Trump and his administration, and I find that absolutely repugnant,” she said.

There was at least one protester outside of the rally, an elderly man with a somewhat off-color sign denouncing Quist.

State Rep. Shane Morigeau, D-Missoula, said that although Democrats suffered big losses in November’s election, “it ain’t over yet.”

Morigeau said Republicans are trying to make voting harder for Democrats and pouring “millions of dollars of dark money” into elections.

“Rob’s opponent is terrified of us showing up,” Morigeau said. “Because when we do show up, we win.”

Sanders also encouraged everyone in the crowd to bring someone along when they vote.

“You guys can make a profound difference,” he said.

Sanders reminded the crowd that he wouldn’t have flown all the way to Montana from Washington if the “times were not so serious.”

“I came here because we face some enormous problems in this country,” he said. “The eyes of the country are on Montana this week. And what people are asking is can a rural state with a small population, can people come together to take on the big money interests that are trying to buy this election?

"Because the people of America know if you can do it in Montana we can do it all across this country. That we can create a political revolution which restores power to working families and the middle class and not just the billionaire class.”

Sanders also campaigned for Quist on Saturday afternoon in Butte, where more than 3,000 attended. In the historically Democrat and pro-union town, Sanders and Quist emphasized they would work to make improvements to the Affordable Care Act, also known as Obamacare.

Gianforte has given an unclear message about where he stands on the Republican plan to repeal and replace the ACA, telling Montana media after the U.S. House passed the bill at the start of the month that he could not say how he would have voted because the bill had not yet been marked up by the Congressional Budget Office. Later Gianforte told potential donors on a phone call he supported the bill.

At his last stop of the day in Billings, Sanders spoke to a crowd of more than 1,000 at MetraPark arena.

Jim Baken, who teaches art at Rocky Mountain College, said he wore a white cowboy hat to the rally both to honor Quist and “because I look good in it.”

Quist “really is solid in his knowledge of the facts,” Baken said, “and he connects with all of us in the middle class.”

He said he was impressed with Sanders’ “passion, strength and intellect. He echoes everything on my mind.”

A Northern Cheyenne contingent was present at the Billings rally one day after the Crow Nation endorsed his opponent, Greg Gianforte. The Northern Cheyenne Nation made official its endorsement of Quist, which the candidate called "a real honor."

Sanders is also scheduled to speak Sunday in Bozeman.

Mike Ferguson and Holly Michels contributed to this report.

Senator Bernie Sanders campaigned on Rob Quist's behalf during a rally on Saturday May 20, 2017. 4,000 supporters attended the rally.

We'll have live updates as Bernie Sanders campaigns in Montana

Vermont Sen. Bernie Sanders is in Montana this weekend to campaign for Rob Quist, Democratic candidate for U.S. House.

Cancer survivor speaks before Bernie Sanders at rally in Butte

Senator Bernie Sanders, left, and Rob Quist wave to the crowd after the conclusion of Sanders' speech on Saturday in the Adams Center on the University of Montana campus in Missoula.

Senator Sanders speaks to the crowd near the beginning of his speech.

Around 4,000 people attended the Rob Quist and Bernie Sanders rally in the Adams Center.