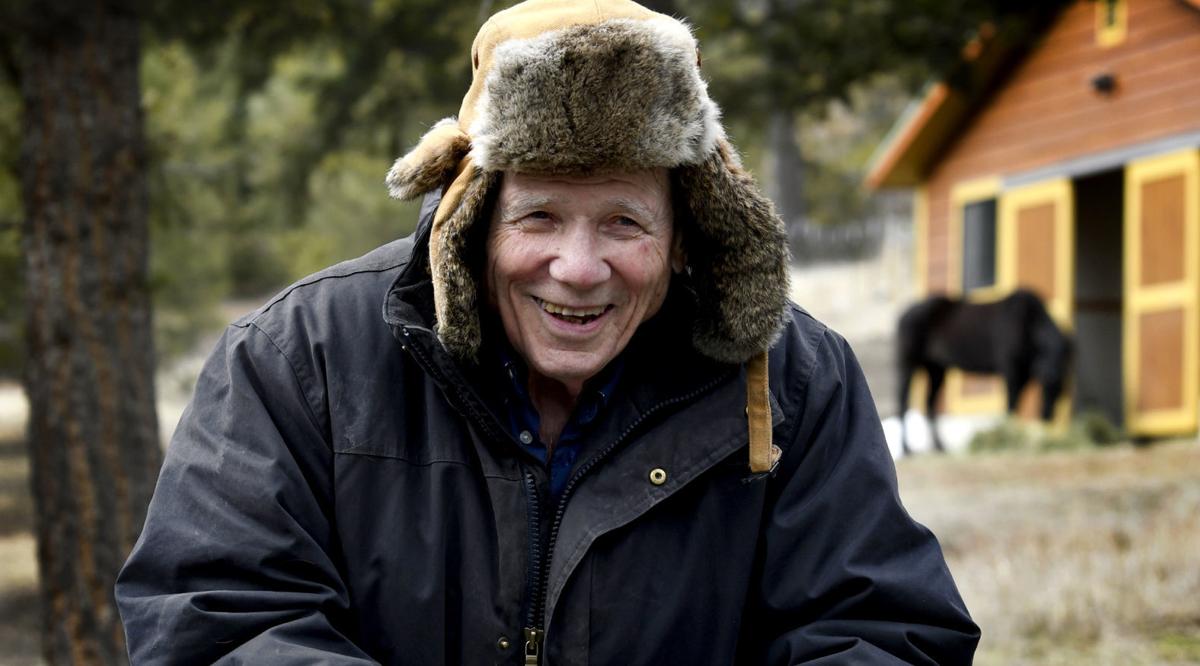 Missoula writer James Lee Burke pauses Wednesday afternoon during the daily chores on his ranch near Lolo. On Thursday, Burke was feted by Arts Missoula, presenting him the Individual Artist Award at its yearly luncheon. "This is the best place I've ever been," Burke told the lunch crowd. "If I leave here one day, I get homesick." 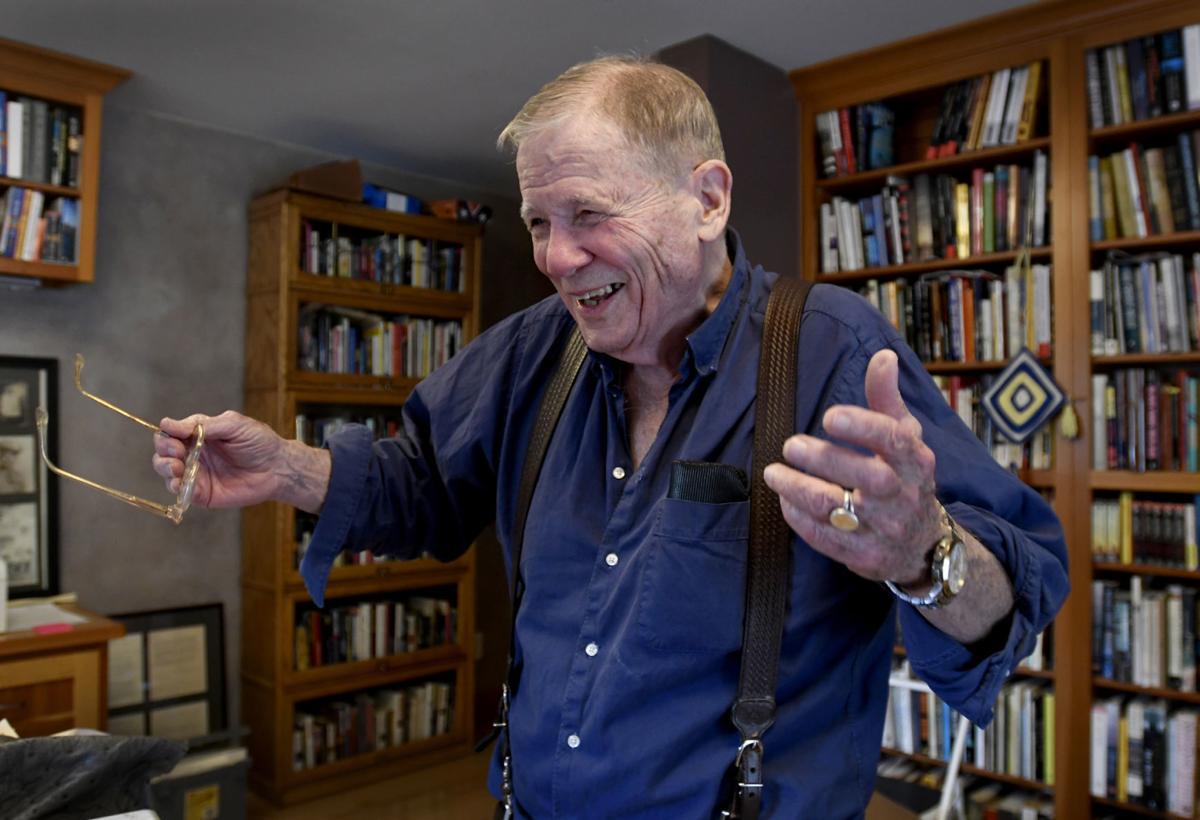 Burke, who the Denver Post called, "America's Best Novelist," laughs at himself Wednesday while telling a story in his home office.

Missoula writer James Lee Burke pauses Wednesday afternoon during the daily chores on his ranch near Lolo. On Thursday, Burke was feted by Arts Missoula, presenting him the Individual Artist Award at its yearly luncheon. "This is the best place I've ever been," Burke told the lunch crowd. "If I leave here one day, I get homesick."

Burke, who the Denver Post called, "America's Best Novelist," laughs at himself Wednesday while telling a story in his home office.

James Lee Burke used an acceptance speech on Thursday to thank the whole city of Missoula.

"This is the best place I've ever been," he said. While he’s been all over the world, Missoula is both "egalitarian" and "alpine,” with every kind of intelligent person you could want to meet.

"If I leave here one day, I get homesick."

The best-selling novelist was accepting the Individual Artist Award from Arts Missoula at its yearly luncheon.

Emcee and Arts Missoula director Tom Bensen listed off the 81-year-old writer's many accomplishments: 36 novels and two collections of short stories; two Edgar Awards for best crime novel; the many, many reviews, including one from the Denver Post that called him "America's best novelist."

In January, the Bitterroot resident published a new novel, "Robicheaux," named after his signature character, a Cajun sheriff's deputy haunted by his experiences in Vietnam and dogged by alcoholism.

The prolific scribe has already finished the sequel, "Ball and Chain." While Burke counts fans around the world, he's especially loyal to Missoula's own Fact & Fiction and holds his release day signings there each year.

Burke said he’d "like to be humble, but let me tell you what my father used to say about humility.” When he was 15, Burke told his dad he wanted to be humble about a particular situation and his father replied, "Don't worry about being humble: Humility will find you."

The awards were given out to a full conference room at the DoubleTree in downtown Missoula.

Arts Missoula, formerly known as the Missoula Arts Council, is a local nonprofit arts agency. Each year, it solicits nominations for the awards and selects winners in five categories.

This year, Sharon Snavely won the Cultural Achievement Award, given to "someone who has consistently supported the arts in numerous ways," as Arts Missoula describes it.

The Arts Educator Award goes to a passionate teacher. This year's recipient is H. Rafael Chacon, a University of Montana professor of art history and criticism.

Montana Public Radio was recognized for Business Support for the Arts for its long-term support for local artists and organizations; and the Cultural Vision honor went to Charlene Campbell Carey of Rocky Mountain Ballet Theatre, for her work building that dance company, touring it around the world, and then bringing dancers and educators back to Missoula at Ballet Beyond Borders, an annual gathering that is now two years old.

In his letter nominating Snavely, the executive director of the Missoula Symphony Association John Driscoll wrote that "her energy knows no bounds and her honesty and sense of humor invigorate all those around her."

The list of organizations she's helped lead is a good indication of that energy level. She moved here in the early 1970s and one of her kids was in the first-ever production of the Missoula Children's Theater. She joined the founding board of MCT Inc. She's also served on the board for the Missoula Art Museum, the Missoula Symphony Association and more.

She's most proud of programs that worked with children, including the MAM's Fifth-Grade Art Experience. Outside of the arts realm, she helped found Camp Mak-A-Dream and bring the state Special Olympics to Missoula.

H. Rafael Chacon "has the rare ability to synthesize art history with politics, psychology, literature, and imagination in a way that blends the entire human experience into his lectures," according to the nomination letter from UM dean of the College and Performing Arts.

Ever the teacher, Chacon deflected attention from himself and back toward his subject: artists.

"I think of artists as not just heroes, I think of them as the conscience of our culture, the conscience of our society. They not only enlighten us, they explain things to us, they articulate the values of what it means to be human in our time, they phrase things in ways that aren't easily graspable. They take huge, awful, sometimes foreboding phenomena and distill it and make it accessible to us," he said.

Chacon was born in Havana, Cuba, and earned his master's and doctoral degrees from the University of Chicago.

In 1994, he joined the faculty at UM and has taught a diverse range of history courses, from ancient Greek to contemporary, and was cited for his creative techniques: having students construct scale models of Rome, or re-enacting an ancient Egyptian funeral procession.

He's lectured for both the Missoula Art Museum and the Montana Museum of Art and Culture, and wrote a book, "The Original Man," examining the career of Missoula architect A.J. Gibson.

Business Support of the Arts

Montana Public Radio, which started out as a 10-watt college station on the UM campus in 1965, now boasts myriad original programs supporting the arts, whether the focus is interviews about live music or Western literature, to its wildly popular children's shows like "The Pea Green Boat."

In his nominating letter, former MAM curator Stephen Glueckert wrote, "I tune into Montana Public Radio on a daily basis like many Montanans, and I do have my favorite programs — and other programs, not so much. But that is the voice of humanity," and the station "enriches the mind and spirit and inspires a lifetime of learning" and "connects communities."

Program director Michael Marsolek cited the many hosts, behind-the-scenes teams and volunteers that fill 168 hours a week of radio time. He also drew attention to the vision of Ray Ekness, director of the Broadcast Media Center and predecessors William Marcus and Terry Conrad.

Underscoring a repeated theme of the event, Marsolek said arts in Missoula are "all about partnerships. We're thrilled to partner with you and your organizations to celebrate and to showcase all the events: the openings, the concerts that make life in Missoula so amazing. I echo how fabulous it is to live in this place in this time."

Never underestimate the power of a letter. If it weren't for a handwritten request, the 20-year-old Rocky Mountain Ballet Theatre might not exist.

Founder Charlene Campbell Carey followed in the footsteps of her mother, a dancer at Rockefeller Center. She reached high levels in her art, including a faculty position at the American Ballet Theatre. She was teaching in Chicago in 1981 when she and her colleagues received a letter asking if someone could come teach jazz in Missoula for a week.

A child of big cities, she thought it could be "the greatest invitation of all time" on par with a safari in Africa. She had an eye-opening visit with a seasoned local dancer Elenita Brown, and returned years later to work on movie productions, eventually moving to Stevensville.

Here in Missoula, Carey founded the RMBT, which has toured in Europe and China and amassed 50 original ballets in its repertoire, including pieces that pay homage to Montana and its people and stories.

In 2017, she partnered with the Vienna Ballet to produce the Vienna International Ballet Experience, which brought professional dancers from around the world to Missoula to audition and perform. This past January, she renamed the event Ballet Beyond Borders to reflect its mission of cultural diplomacy, using dance to build bridges across cultures and continents.

As she scanned the room, she said, "I've collaborated with most of you, or you've helped raise money for an event, or you've brought your children to study with us for the last 20 years," she said. "And we're just getting started."