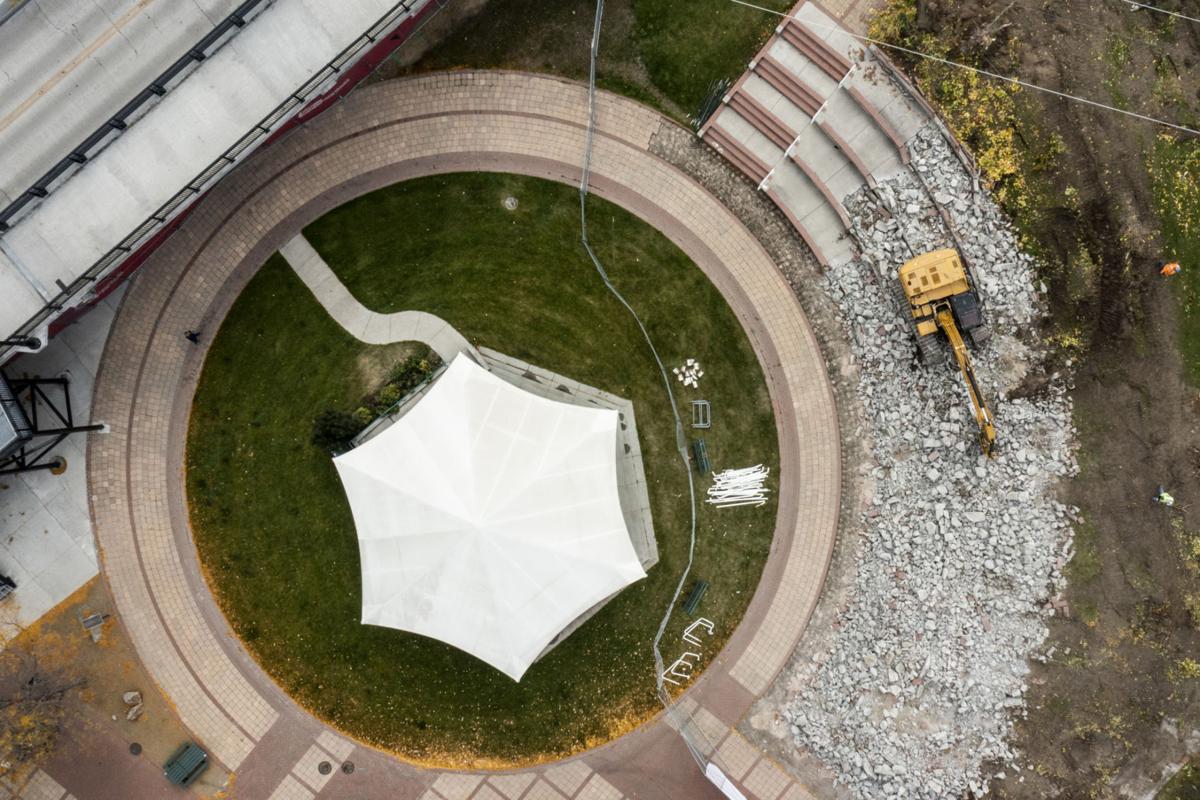 Construction continues on the Caras Park amphitheater on Thursday afternoon. 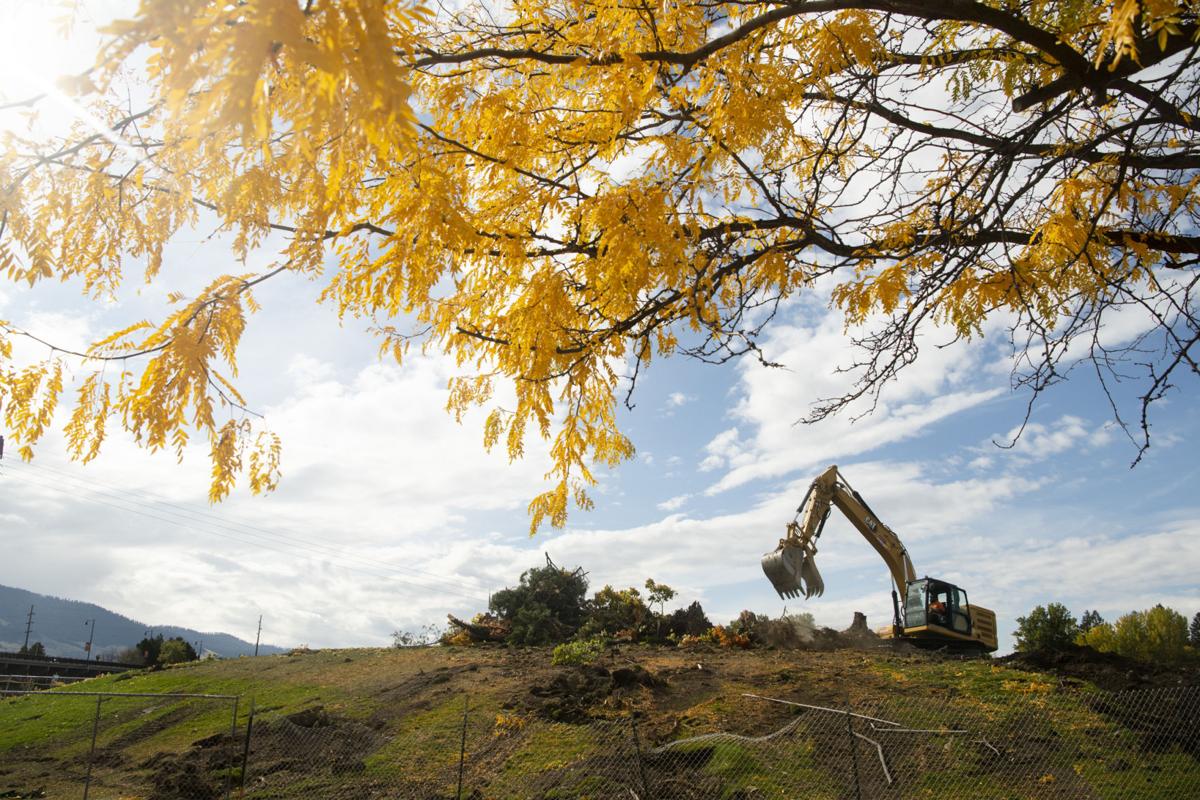 Crews work to flatten the hill at Caras Park on Thursday.

The big grassy hill in Caras Park in downtown Missoula is not long for this world, as a dramatic alteration of the busy public plaza is now underway.

The first phase of a project to revamp the park began this week, and it includes flattening the hill to make way for a multi-use lawn space for events and activities.

The concrete amphitheater was also torn out and will be replaced with a new and expanded seating area that will be more easily accessed by people of all abilities.

When it’s complete next spring, there will be more accessible connections between the river and the park and an 18-foot wide riverfront promenade. The public will also notice more electrical hookups for vendors, new lighting systems, benches and more trees and grass. And as long as the grounds are being torn up, the city is also using the opportunity to install a new stormwater infiltration gallery to keep pollutants out of the river.

The project’s $2.2 million price tag is funded in part by $750,000 from the city’s capital improvement program and a $650,000 contribution from the Missoula Downtown Foundation, which got donations from 50 different businesses.

The initiative will “improve the circulation, capacity and aesthetics” of one of Missoula’s most popular parks and downtown destinations, according to Linda McCarthy, the executive director of the Downtown Missoula Partnership. The foundation is its funding arm.

“Our downtown businesses stepped up to help us get this project off the ground,” she said in an email. “We really appreciate the opportunity to save time and money by partnering with the city’s stormwater project to begin the transformation of Missoula’s ‘town square.’ We can accomplish more by working together than we can working independently.”

Lori Hart, a spokesperson for the city’s public works department, said the city is saving construction time and about $100,000 by combining the stormwater and park improvement projects while work is underway nearby to rebuild the Beartracks Bridge.

The stormwater infiltration gallery will improve the water quality of the Clark Fork River by diverting the first one-half inch of stormwater, which will prevent dissolved contaminants like grease, oil, bacteria and water warmed by the streets from entering the river, Hart said.

“Improving the water quality at the outfall is beneficial to public health and safety because major stormwater contaminants will go to the infiltration system instead of the river outlet, downstream from Brennan’s Wave, a popular recreation area,” Hart said.

Another $885,000 of the project’s cost will be financed by state and federal grants.

Libby Brunell, the board president of the downtown partnership, said she’s proud that local businesses recognized the need to usher in a new era for one of the busiest public spaces in town.

“The Missoula Downtown Foundation is here to raise funds for implementation of the downtown master plan and for downtown projects and programs that benefit our community,” she said. “By partnering with the city of Missoula and bringing in substantial support from the private sector, we are saving a significant amount of money and an entire construction season. We can’t wait to showcase these improvements during next year’s event season.”

If all goes as planned, Prospect Construction will complete the upgrades in May, and the Caras Park pavilion will be open for community events and festivals that month. Impacts to park and trail users this winter will be minimal, with some trail closures expected next spring.

McCarthy said future phases of the North Riverside Parks & Trails Plan include transforming the area under the Bear Tracks Bridge into a “vibrant and colorful multi-use play space."

There are plans for improved river access and bank restoration in Caras and Bess Reed parks, an expanded and better-connected riverfront promenade throughout downtown Missoula and new restrooms. Planners envision ice skating opportunities near the Carousel "to activate the parks year-round," along with improvements to Kiwanis Park and Downtown Lions Park.

For more information about the project visit engagemissoula.com/north-riverside-parks-trails.

Caras Park renovations on the way

The concrete amphitheater will be renovated to add grass rows, while the hill will be flattened into a lawn with seating walls.

A man suspected of firing shots near Florence turned himself in to authorities early Saturday, according to a Facebook post by the Missoula Co…

Mindbody has secured a $500 million investment in order to accelerate growth.

"We do a big emphasis on music and art and color and that kind of thing.”

Construction continues on the Caras Park amphitheater on Thursday afternoon.

Crews work to flatten the hill at Caras Park on Thursday.

The near-term plan for Caras Park, found in the North Riverside Parks and Trails Plan created by the Downtown Missoula Partnership and other agencies, calls for an ice ribbon and other amenities.