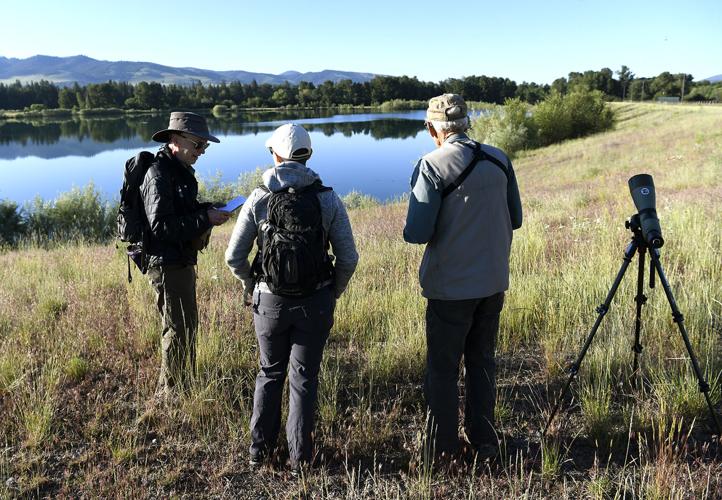 Ed Monnig, Jillian Leblow and Jim Brown, from left, help with a bird survey at the former Knife River Corp. property west of Fort Missoula last week. The city now owns the property, and the Five Valleys Audubon Society is helping determine how many birds are using the area that includes a flooded quarry. 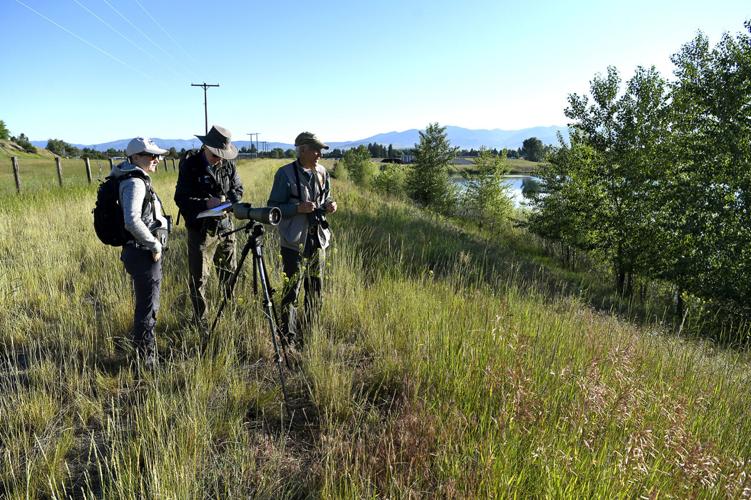 Leblow, Monnig and Brown look for birds along the shore of the flooded quarry at the site. Five Valleys Audubon and other groups hope the city will conserve the land as bird habitat.

More than a dozen people fanned out over a former Knife River Corp. property near Fort Missoula at 7 a.m. on June 30 looking for what they already knew were there: birds.

The birders, mostly affiliated with the Five Valleys Audubon Society, spent two hours recording the species and number of birds they observed wandering the 89-acre property. The land, which borders the Bitterroot River to the south, Fort Missoula to the east and McCauley Butte to the west, includes two ponds created by flooded quarries — a major attractant for birds.

Five Valleys Audubon birders are keen to substantiate the ponds' status as prime habitat for birds. Thursday's survey was the fourth of five that the group, partnered with Five Valleys Land Trust and the Clark Fork Coalition, is conducting to help inform the city of Missoula's eventual plans for the property. The groups hope that data gathered on the birds that pass through the property — and particularly birds that nest and breed there — will influence the city to conserve the land specifically as bird habitat.

"It's hard to imagine, but there was a huge concrete mixing plant on this site," Ed Monnig, a Five Valleys Audubon board member, said during the June 30 survey as he strode through knee-high grass, binoculars in hand. "They've done a very credible job of reclaiming it."

Knife River Corp. closed its concrete mixing facility on the site around 2018; the city acquired the land in 2020 under an agreement hashed out two decades before. That agreement, made with Knife River predecessor JTL Group, stipulated that the company would transfer the property, now known as the Knife River Ponds, to the city after the site was reclaimed.

The city envisions a publicly accessible parkland preserve on the site, as well as restoration and protection of important natural resources, according to a November 2020 city staff referral. It recommended that the City Council authorize the mayor to accept the property transfer. Missoula Parks and Recreation Director Donna Gaukler wrote in an emailed statement Wednesday that a public planning process for the parcel, similar to the planning process for the Fort Missoula Regional Park, would take place sometime in 2023.

"The public process will share the natural science assets and conditions, existing land/site conditions, and history with residents, neighbors, and stakeholders," Gaukler wrote. "Habitat protection and native species restoration will be the highest priorities. Once we understand the area’s ecosystem and each species’ particular needs, we will prioritize the reclamation, management, and maintenance strategies that are most beneficial to those species needing the greatest protections. In addition, we’ll complete a financial analysis and develop cost projections to maintain and manage the site sustainably."

The land is situated at the far southern end of the Clark Fork River-Grass Valley Important Bird Area (IBA), a 21-mile stretch of river recognized by the National Audubon Society as vital to bird populations. Jim Brown, another Audubon board member, said during the survey that more than 220 different species of birds have been documented in the IBA. The pond property, with its quiet, still water about 30 feet deep, is "a key part of this IBA."

"It's attracting in unusual migrants to Missoula ... it's a natural place for migrating birds to stop off," Brown said. He added that some species of birds spotted around the ponds were in the midst of transcontinental migrations spanning thousands of miles.

Poody McLaughlin, chair of Five Valleys Audubon's IBA committee, helped organize the surveys, which began in mid-May. She said in a phone call Wednesday that the past week's survey turned up 64 species, with different birds concentrated in different areas of the property. As migratory birds pass through the property, she said, the compositions of species observed there has changed from survey to survey.

The June 30 group saw four different waterfowl species with chicks, nests of the regionally rare red-naped sapsuckers, a massive heron rookery, and a remarkable profusion of grassland birds like meadowlarks. But what surprised her most was that all of those, and more, were found all together on what was until recently a heavy industrial site.

"This is a gravel pit, right?" she said. "We really were birding in an industrial area. To find 64 species in one day, and that is not the high number of species in the surveys ... just to find that diversity and birds that depend on that habitat, even though it really is a disturbed site, think of what we could attract if we created a better habitat for waterfowl. I think it has great potential for being truly remarkable as a natural area."

The city also recognizes the site's importance to birds. The November 2020 referral to the City Council noted, "the two ponds on the property constitute some of the only large, open water bodies in the greater Missoula Valley. Large bodies of open water are especially important to migratory waterfowl, which require stopover sites during migration."

The property is closed to the public as the city determines what to do with it; the bird surveys are being conducted with city permission. Over the course of the four surveys so far, Brown noticed that "there's parts of the pond they prefer and we're not sure why," particularly the far western edge of the larger of the two ponds. He said he hoped the city would keep the property generally in its current state to maintain the habitat for birds. Some changes, like grading around the ponds to create gradual shoreline in place of steep quarry walls, could further improve the habitat. When public access is allowed, he said, it should be restricted during migration, especially on the larger pond's western side.

"This isn't any old pond around town," he said. "Water available for migrating water birds throughout North America is a dwindling resource."

Thanks to persistent effort, the Blackfeet Indian Reservation now has about 700 bison grazing on the rolling hills east of the Rocky Mountain Front and Glacier National Park.

A major forestry and fuels treatment project proposed for the Bitterroot National Forest has community members and stakeholder groups divided on whether thinning the forest is the best way to reduce wildfire risk and enhance habitat, and whether the U.S. Forest Service's approach to analyzing the project provides adequate analysis and public input.

“I see our species at the mouth of a very long and very dark tunnel,” she said. But there’s a “little star” at the end of the tunnel: hope.

At least half of the skis sold worldwide each year are manufactured in western Ukraine, mostly in factories around Mukachevo, according to industry estimates.

The day-old Moose Fire has burned more than 1,000 acres near North Fork, Idaho, and threatens to close U.S. Highway 93.

The trip is limited to 20 participants and registration is required. To sign up, contact Kathy at 406-837-3837 or mtkat67@gmail.com. This event is free and open to the public.

Ed Monnig, Jillian Leblow and Jim Brown, from left, help with a bird survey at the former Knife River Corp. property west of Fort Missoula last week. The city now owns the property, and the Five Valleys Audubon Society is helping determine how many birds are using the area that includes a flooded quarry.

Leblow, Monnig and Brown look for birds along the shore of the flooded quarry at the site. Five Valleys Audubon and other groups hope the city will conserve the land as bird habitat.