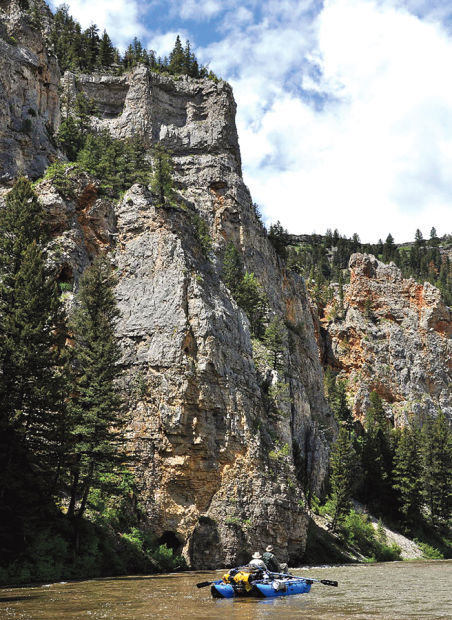 Limestone cliffs tower over anglers and boaters in portions of the Smith River. 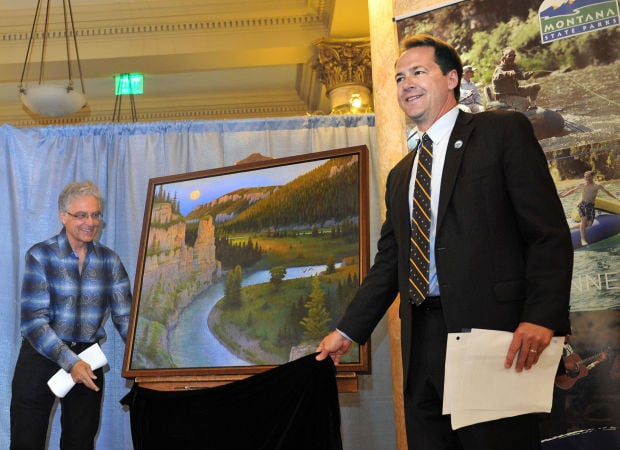 From left Artist Monte Dolack and Gov. Steve Bullock unveil the most recent painting by Dolack entitled "Smith River in June", which he was commissioned to paint in celebration of Montana State Parks 75th Anniversary and to help kick off the summer season.

With miles of otherwise inaccessible wild waters bounded by picturesque cliffs and little development, the Smith River continues to grow in popularity as a multi-day floating, camping and fishing experience.

That experience and the river would degrade if too many people tried to visit. So in 1993, the state created a permit system to limit the number of trips per day.

Since then, the number of people applying for the 1,100 or so permits awarded each year has exploded from around 200 to nearly 7,400.

A camper asked Cooney if many boaters had asked about the proposed Black Butte Copper Mine, which, if approved, could affect the water in Sheep Creek.

"Only one. I don't think many people know about it," Cooney told the Bozeman Chronicle.

That will probably change over the next few years.

Even though a mine proposal is now at least a year away, supporters and opponents of the mine have recently launched their respective public-relations campaigns.

The social-media blitzes from both sides are unlikely to let up until the mine is approved or rejected, three or four years down the road.

Statewide interest in a potential Black Butte copper mine was minimal until this year, when an effort to ramp up operations sparked a fight over water.

But in November 2012, Tintina requested permission to dig a 2-mile-long, truck-sized shaft angling to a depth of 450 feet.

A half-mile from Sheep Creek, the shaft would angle through the water table, requiring groundwater to be pumped away from the mine. This could cause area groundwater levels to drop.

The copper-sulfide ore extracted from the shaft and any future mine has the potential to create sulfuric acid when exposed to air and water.

Tintina proposed methods to prevent such acid mine drainage. But opponents pointed out that acid-prevention plans for several mines in Montana haven't worked.

In addition, the mining could expose other minerals in the rock, such as arsenic and strontium, that could leach into the groundwater and end up in Sheep Creek.

"Our No. 1 concern is the impact to water quality. Any mining project that goes to full scale has acid mine drainage," said Scott Bosse of American Rivers. "The Blackfoot River has taken decades to recover from that at taxpayer expense."

Montana Fish, Wildlife & Parks voiced concern because Sheep Creek is a spawning ground for more than half of the trout that populate the Smith River. Contamination could decimate the fishing and river ecosystem that FWP has worked to restore.

However, in January, after receiving more than 4,400 comments on a basic environmental assessment, the Montana Department of Environmental Quality approved the exploratory shaft.

Environmental groups sued the DEQ on March 14, alleging that the mineshaft constituted a full-fledged mine and demanding a more rigorous environmental impact statement to assess water concerns.

Three weeks later, Tintina surrendered the permit amendment, saying it could use less invasive means to complete its exploration.

Since then, Tintina and its challengers, a coalition of environmental groups and Smith River outfitters called "Save Our Smith," have created Facebook pages and Twitter accounts, both relatively new tools in the battle for public opinion.

Environmental groups are versed in the use of email alerts and old-fashioned mailings to rally their supporters. The "Save Our Smith" group has already mailed out more than 200 of its new bumper stickers.

"All companies are realizing that Google is the new New York Times," Harrison said. "A company in trouble, trying to get permits, will need to get stakeholders: voters, customers - those people who support candidates who support natural-resource development. They're online."

Social-media websites allow groups and organizations to package their message, emphasizing one issue, downplaying another.

"This is a direction that Tintina needs to go, knowing that in the 21st century, we need to do things differently. We need to do our best to educate the public and get them involved in the process," said Tintina spokeswoman Nancy Schlepp.

Tintina hasn't given up on face-to-face connections. It continues giving presentations to everyone from local government leaders to fishing outfitters and agricultural organizations.

Tintina's message emphasizes the 200 jobs and the money that a full-scale mine could bring in over the 11 years that the copper reserves are predicted to last.

That has gained the endorsement of city organizations and government officials in White Sulphur Springs, who want the town to recover from the shutdown of a nearby lumber mill in the 1980s. They aren't very interested in the arguments from the other side.

"I'm sure the boaters bring in business - it all helps. But that kind of mine would really help our economy in White Sulphur Springs with jobs," said Mayor Julian Theriault. "We just need to figure out how to bring in another business or two that will make up for (when the mine closes)."

Both Tintina and DEQ representatives say that Tintina will use newer mining methods that weren't used in the Montana mines that have contamination problems.

Zieg said he would shut the mine down if water problems showed up in Sheep Creek, Theriault said.

"I think these questions that are coming up from opposing groups are more on the basis of their businesses, but they affect the river too," Theriault said. "They made these big accusations without actually coming here. You should know the facts before you start dinging somebody."

Farling is well acquainted with the area and attended a Tintina presentation in April with Smith River outfitters. He said the outfitters and fishermen weren't buying the Tintina message of environmental concern.

"I've seen this routine many times before with other mining proposals. They hire locals to be their spokesmen, promise jobs and claim to be state-of-the-art," Farling said. "They're already guaranteeing that there won't be a problem. But we don't have a full mine proposal, and they're still collecting data on the area."

Trout Unlimited won a 2006 Smith River lawsuit in the Montana Supreme Court that forced the state to recognize that groundwater wells can affect surface water.

But the organization often participates in collaborative multi-use agreements, to the chagrin of some environmental groups. Farling was a fisheries consultant for the Stillwater Mining Co., among others.

"We're open to stuff, but this is a lot different because of the location and it's a sulfide-ore body. Every time we've tapped a sulfide-ore body in the state, we've created a major problem: acid-mine drainage in perpetuity," Farling said. "To capture and treat water forever in the Smith River drainage? Not worth the tradeoff."

Farling said that by the time contamination showed up in Sheep Creek, it would take several years to flush out.

Schlepp agreed that water is the issue.

"There are legacy issues in Montana that need to be addressed. We need to look at those and find out why this project is different," Schlepp said.

The Tintina team has been conducting water-quality tests to protect Sheep Creek, Schlepp said. They've also been running tests to learn which levels of rock will produce acid once it's extracted.

Schlepp said Tintina hopes to have a feasibility study done so it can submit a mine proposal in a year or so.

But it may take longer. Tintina is facing funding issues, which weren't helped when the exploratory shaft was canceled.

"Any time you have more information, it's easier to get financing. There's money in the bank, but to take it to the next level, we need to find strategic partners," Schlepp said.

Once it has a proposal, DEQ will require a few years to complete a full environmental impact statement.

Some people worry because DEQ has rejected few mining permits over the years.

Saeger said approval for any future mine will be based upon the best-available science. But with mines, that science is based upon assumptions and predictions.

That speaks to the difficulty with mines: There are many unknowns because everything is underground.

Some companies open mines only to find more hurdles than they thought.

For example, Canada-based companies Teck and NovaGold have been stymied in development of the Galore Creek mine in northwestern Canada due to construction issues and escalating cost.

Additionally, models used for predicting mining effects on water quality do not have a good track record, according to a two-year study conducted by Montana geologist Jim Kuipers.

Kuipers found all mine companies predicted their mines could stay within with water-quality standards.

But once in operation, three-quarters of the mines had contaminated water, and efforts to control the contamination failed in two-thirds of the mines.

But Schlepp is convinced the mine can coexist with the river.

"I can see why emotion drives a lot of this. But I really hope people ask their own questions and make up their own minds," Schlepp said.

Stillwater scaling back work at Canada mine site

BILLINGS — Stillwater Mining Co. is further scaling back work on a proposed precious metals and copper mine in Canada.

An email popped into my inbox in early March: “I drew a Smith River launch permit for April 23 and was wondering how adventurous you feel?”

The company exploring near the headwaters of the Smith River for a potential copper mine met with river outfitters in Helena on Wednesday.

Limestone cliffs tower over anglers and boaters in portions of the Smith River.

From left Artist Monte Dolack and Gov. Steve Bullock unveil the most recent painting by Dolack entitled "Smith River in June", which he was commissioned to paint in celebration of Montana State Parks 75th Anniversary and to help kick off the summer season.