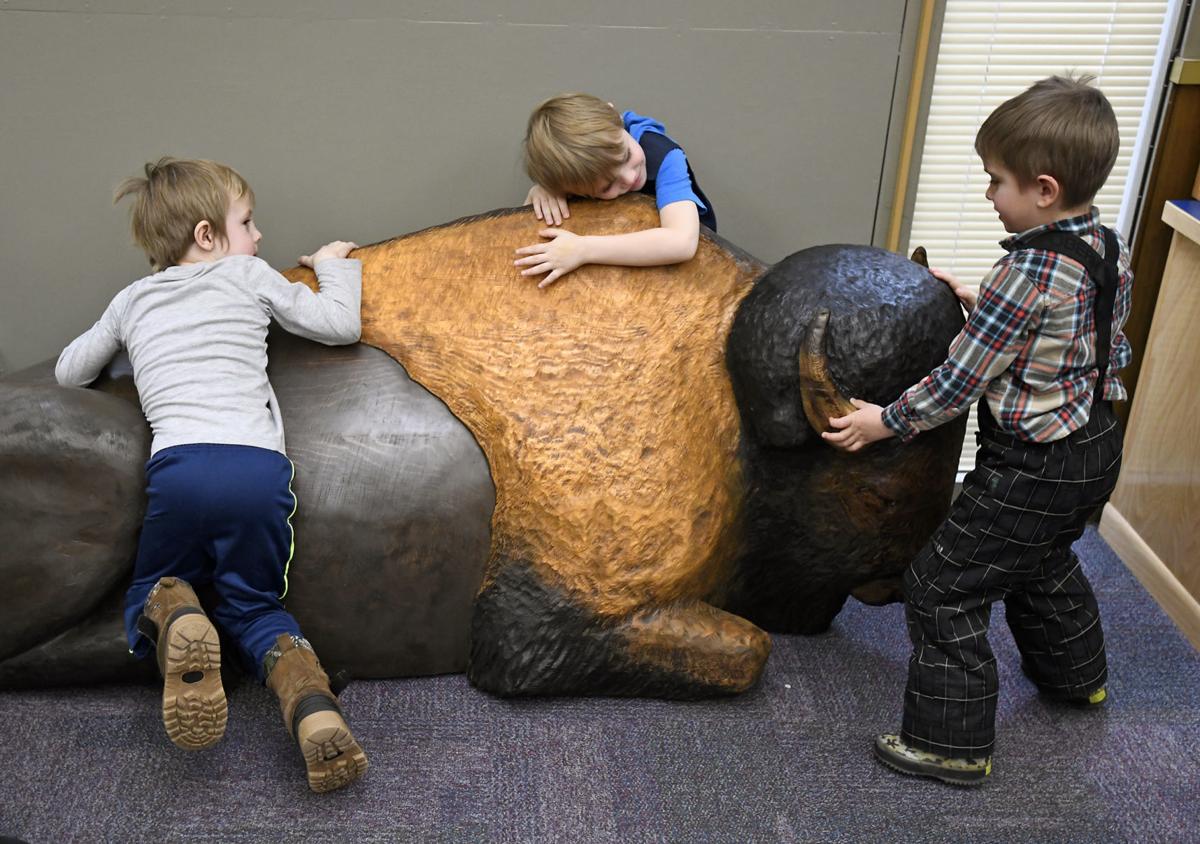 Bonner School kindergartners Trystin Beezley, Zander Bingham and Liam Lund, from left, get acquainted with the school's new bison sculpture during its unveiling on Thursday. The carved wooden bison, created by sculptor Ice Rogers, anchors a reading nook in the school library. 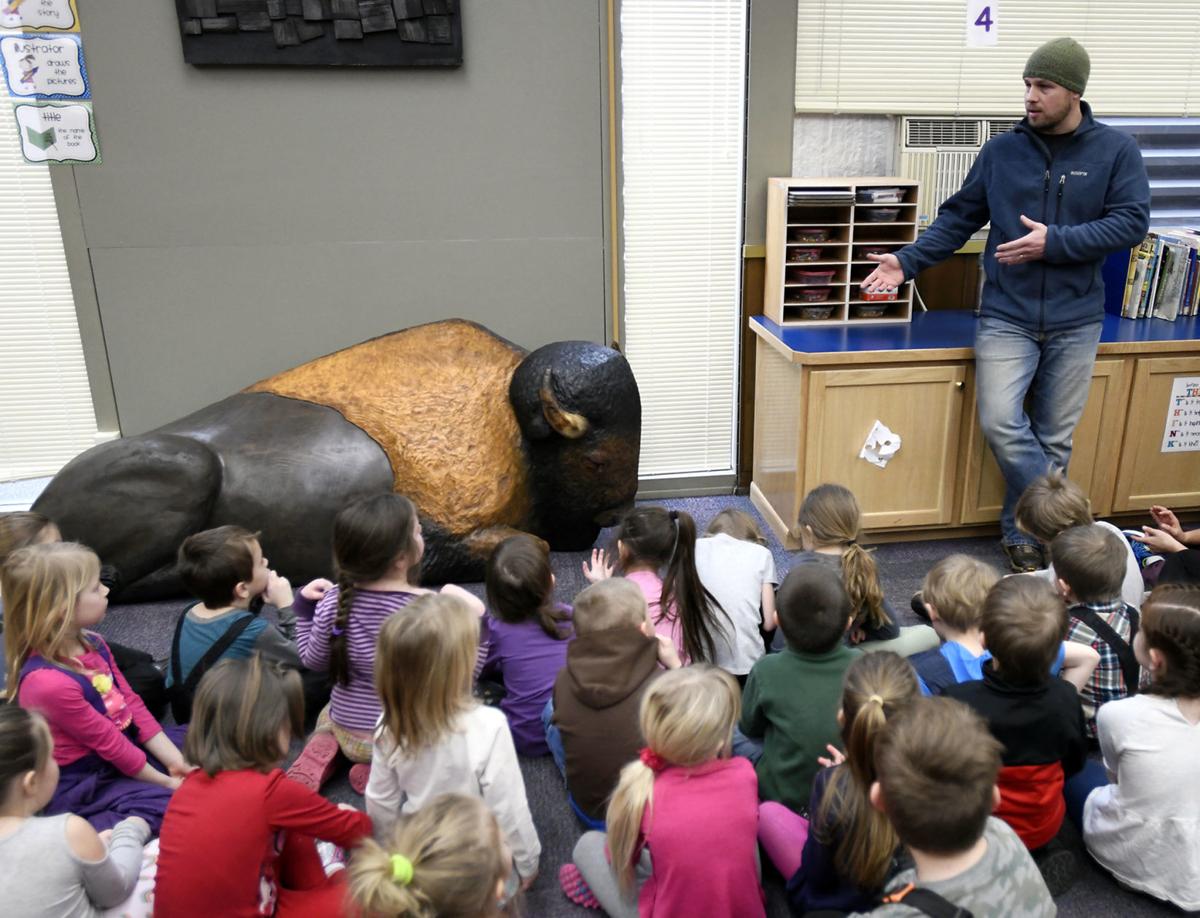 Ice Rogers explains to Bonner School students how he made the bison sculpture that now has a home in the library. The Bonner Development Group bought Roger's sculpture and donated it to the school.

BONNER — Now this town on the river of the Road to the Buffalo has a bull of its own.

He’s big and wooden and weighs half a ton.

The bison roams his range in repose, starting this week and for years to come, in the reading nook on the back wall of the Bonner School library.

“Read to him, but quietly, because he’s sleeping,” urged Ice Rogers, the chainsaw sculptor who created the wooden bull.

His audience Thursday morning consisted mostly of some 70 students from kindergarten and sixth grade, chosen in “somewhat strategic” fashion for the public unveiling, as school superintendent Jim Howard explained.

“Kindergartners, this is your first year at Bonner School. You’re going to be here for eight more years, so you’re going to really get to know the buffalo better than anybody, aren’t you?” he said to the excited 5- and 6-year-olds sitting cross-legged or kneeling on the floor.

“The sixth-graders in Mr. (Dylan) Huisken’s class, you are studying a lot about Montana history and the history of this region. As you know, I’m sure, the buffalo plays a big part in Native American history and Native American culture in Montana and all over.”

The carved bison comes courtesy of the Bonner Development Group, which voted to buy Rogers’ piece and donate it to the school.

Years ago Bruce Hall, BDG’s executive director, taught Rogers at Potomac School. In 2004, Hall and the BDG worked with Rogers and the school on another piece of chainsaw art, a 9-foot tall lumberjack on display in the gymnasium.

Howard said the bison will anchor a display that supports students learning about Native American culture and about Bonner’s location on the Salish trail to bison hunting grounds. A branch of that trail ran across the Blackfoot River from the school to its headwaters. Another traced the adjacent Clark Fork River.

In October, the sixth-graders in Huisken’s history class learned about Bonner’s history and how it related to tribal histories of the region. In gym class they played American Indian games, and in English they read “Touching Spirit Bear.”

“I noticed how all the classes were connected,” sixth-grader Rilan Marks said.

Huisken said that was intentional. Middle school teachers weaved their courses into an integrated unit about Montana tribes.

Sixth-grader Keira Babbitt said her class went to the National Bison Range at Moiese last year. They can appreciate what the bison in the library signifies.

“It feels real good to be connected to something about our past that goes into the future,” Babbitt said. “Years and years from now, if you have grandkids that might come to this school, it’d be cool to tell some stuff about what you learned and also say, ‘I was here when the buffalo first came.’ ”

Rogers grew up around chainsaw art. He told the students he was “maybe 3 years old” when he started sculpting under the tutelage of his father Jim, a professional chainsaw artist whose pieces are widespread in private collections and public displays. One is of Meriwether Lewis and his dog, Seaman, at a Highway 200 roadside pullout on the Blackfoot.

Ice Rogers said the noted artist Walter Hook, a Bonner School alum, was his father’s favorite professor at the University of Montana. He pointed at the wall-length Hook mural and a number of smaller Hook paintings on the library walls.

“I’m honored to be able to have some of my artwork in the same library,” Rogers said. “I knew the students would hopefully appreciate the buffalo and take care of him and enjoy him.”

Hall said he never envisioned what would become of the “very large” ponderosa pine he spotted by the road in Turah last spring. It had floated down the Clark Fork and was lodged against a bridge pier. A crew from the Montana Department of Transportation pulled it out to protect the bridge and set it nearby.

Hall apprised Rogers of the tree. With a crew of his own and a lot of heavy equipment, Rogers sawed it up and trucked it away in pieces. He kept the butt  for his own use. Brother Brent, who has his own custom chainsaw carving business in Milltown, got the rest.

Ice Rogers explained he’d finished a commissioned bison sculpture eight years ago and wanted to try his hand at another. When he finished less than a month ago, he called Hall to take a look.

“I have to tell you, I immediately fell in love with it," Hall said.

“I thought this is such a nice piece of artwork that we need to keep it in the community somehow,” said Hall.

Rogers liked the idea. In discussing where it should go, “we kept coming back to the school,” Hall said.

The BDG board agreed enthusiastically to support it, as did Howard and the school board.

Rogers, who has his own children in Bonner School, thanked the school and the BDG.

“It’s always nice when someone believes in your work enough and cares enough and connects with it to actually want to keep it,” he said. “I appreciate that.”

Leigh Ann Valiton watched a customer meander the aisles of the Blackfoot Commercial Co. in Ovando. Valiton’s store, and attached Inn, is open …

Blackfoot Pathways gets a 'Gateway'

LINCOLN — Artists layer lots of meanings into their work. The most basic interpretation of Jaakko Pernu’s gigantic addition to the Blackfoot P…

Missoula concerts you should catch in 2018

Bonner School kindergartners Trystin Beezley, Zander Bingham and Liam Lund, from left, get acquainted with the school's new bison sculpture during its unveiling on Thursday. The carved wooden bison, created by sculptor Ice Rogers, anchors a reading nook in the school library.

Ice Rogers explains to Bonner School students how he made the bison sculpture that now has a home in the library. The Bonner Development Group bought Roger's sculpture and donated it to the school.