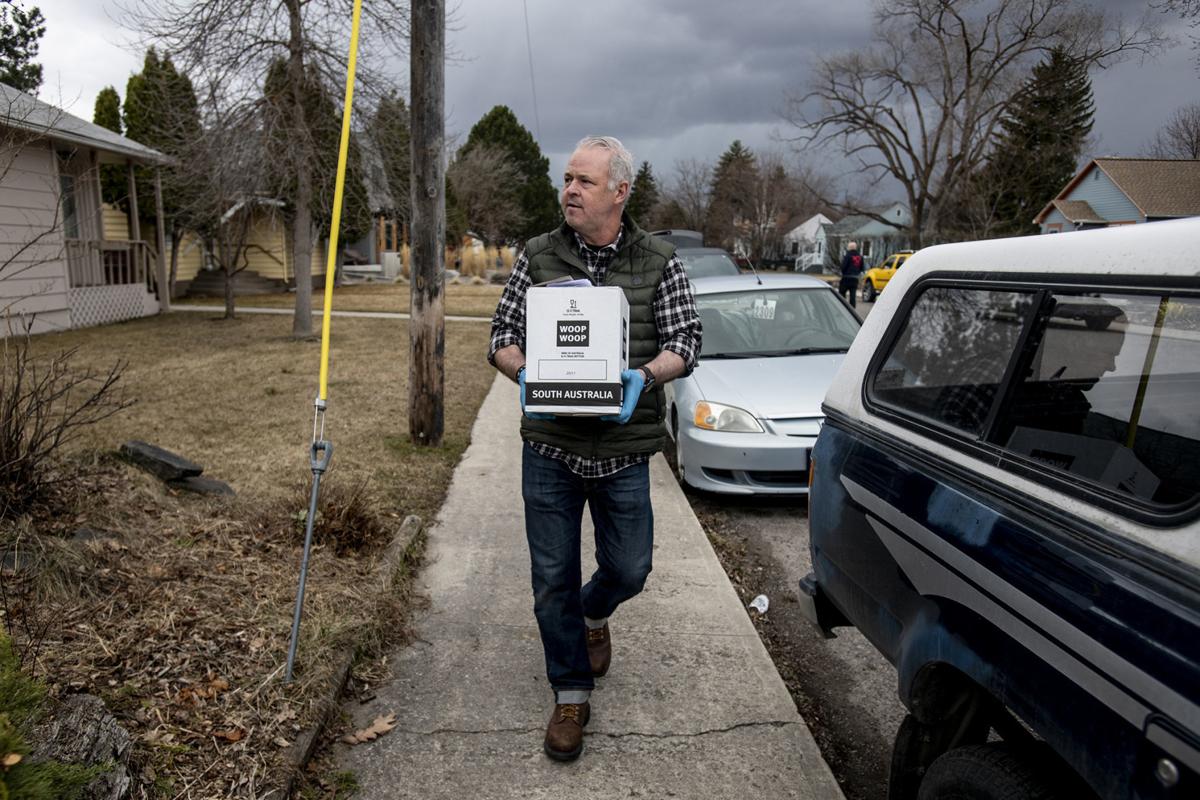 Doug Ness, owner of Missoula Wine Merchants, made multiple deliveries of wine to his customers' homes on Wednesday afternoon. The shop offers free wine deliveries throughout the year, though the service has seen an uptick as local bars and restaurants are closed to dine-in service. 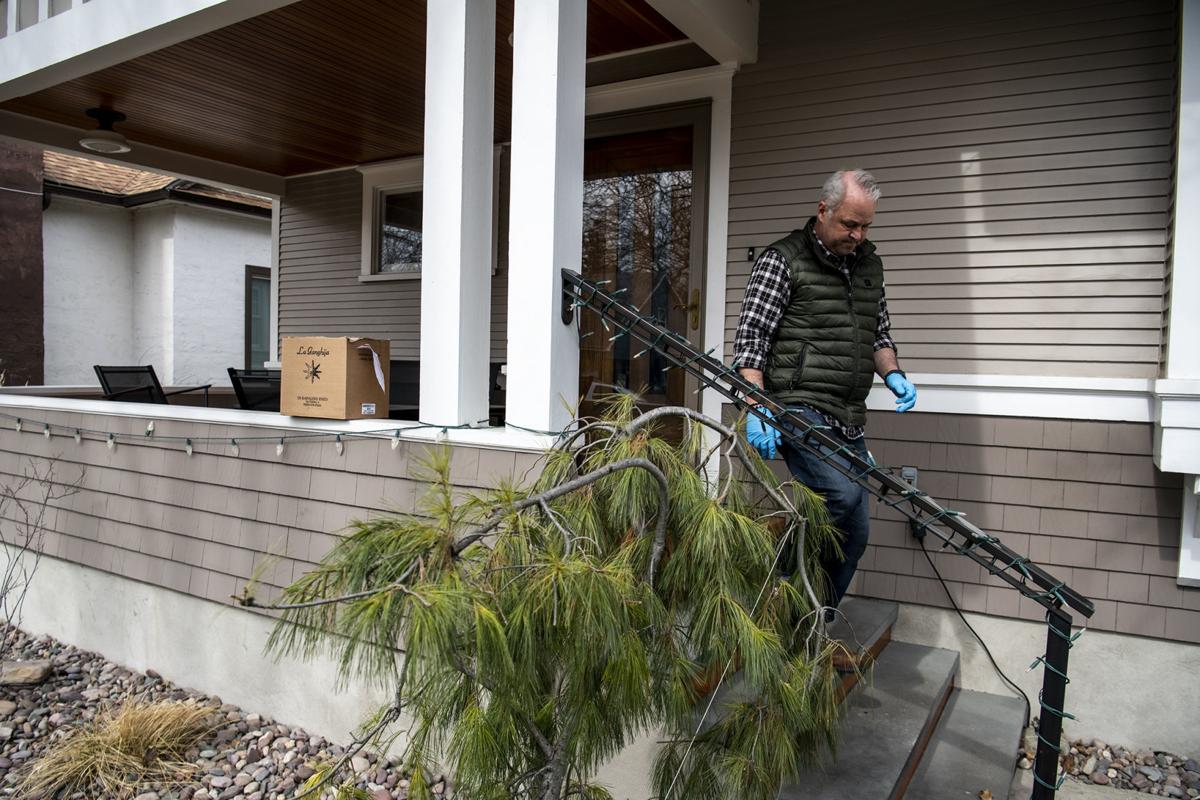 Ness offers contactless delivery, allowing his customers to stay at safe distances. The deliveries have allowed Ness to avoid laying off members of his staff.

Liquor, wine, beer and medical cannabis are all available for delivery in Missoula as businesses adapt to fewer in-house sales.

Doug Ness, the owner of Missoula Wine Merchants in downtown Missoula, was a busy man on Wednesday as he made deliveries of wine bottles and gift packages to homes around town. He opened his shop in 2015 and has always delivered, but now his delivery service is picking up, helping keep 11 part-time staff members employed during this crisis.

“We offer free delivery,” he said. “Now, the way most people have taken us up on that in the past, the most common way, has been around the holidays with gift baskets. You know, Missoulians are used to getting pizza delivered and various things, but not so much wine, groceries. In the big cities, people are used to calling up, getting online, whatever, and having groceries delivered, wine delivered, whatever it is.”

These Missoula-area businesses offer pickup and delivery, and special hours for at-risk patrons

Now, he said, the coronavirus pandemic is giving residents of the Garden City a little more awareness.

“Obviously over the last week and a half, Missoulians have started getting used to, ‘Wow, I can get wine delivered to my doorstep? That’s perfect, I don’t have to leave the house,’ and they can self-isolate and stay quarantined, and bottom line it’s the safest place to be right now,” Ness said. “I think some of the most dangerous places to be right now are grocery stores.”

Ness said he works hard to source small-batch wines rather than mass-produced products, and it isn’t always easy finding those in the price range of under $20, but that’s what most of his customers want.

So far, the deliveries have allowed Ness to avoid laying off staff members, some of whom have young children to take care of. One silver lining is that gasoline prices are low right now, so Ness’ overhead isn’t what it would be back when gas was above $3 a gallon.

“It makes a big difference,” he said.

Erica Woodahl, one of Ness’ customers, said she’s trying to avoid going to the grocery store more than once a week, so that’s why she ordered a case of wine on Wednesday.

“Doug usually knows what I like, so he makes up a box of what I like to drink,” she said.

Another customer, Lou Bahin, said he’s trying to do his own tiny part to help small businesses keep going.

“We never order take-out usually, but this week we are,” he said.

Sharla McCauley of Grizzly Liquor in Missoula said they’ve always offered delivery of booze for $8 per order, but things have picked up in the last couple of weeks.

“We usually do about two or three a week,” she said. “It’s more than that now.”

For those that like their liquor already mixed, several restaurants are offering take-out cocktails. The Camino on Front Street, for example, is offering their margaritas in to-go cups along with take-out Mexican food.

Local craft beer can show up on your doorstep with a phone call as well. Conflux Brewing Company in Missoula is offering growlers, crowlers (large cans) and food for local delivery as long as the minimum order is $25, according to employee Rae Schneider.

Medical marijuana is also available for delivery from dispensaries in Missoula.

“We moved to strictly delivery because it was the responsible thing to do for our family and the community,” said co-owner Michaela Schager. “We’re super grateful that we have that option. We were not forced to close.”

She said it still looks like they’re doing about half the revenue they were before the virus shutdown, but more and more people are realizing that free delivery is something they can take advantage of.

“It’s hard to say how it’ll impact us going forward,” she said. “We’re still transitioning and people are getting used to ordering online. We’re hoping people get the hang of it and utilize it.”

Several local businesses, like Logjam Presents and Hide & Sole shoes and leather, have committed to paying their employees for lost hours.

Worden's Deli has made a tradition of serving shepherd's pie as its lunch special on Wednesdays, when hungry Missoula City Council members bre…

Plummeting gas prices nationwide dipped below $2 a gallon for regular over the weekend for the first time since April 2016, and they appear to be headed much lowe.

Cannabis rules in Missoula regarding recreational marijuana dispensaries and manufacturing are edging closer to finalization ahead of the first sales in the state set for Jan. 1.

Scientists create a bubble that lasts more than a year

Scientists create a bubble that lasts more than a year

Doug Ness, owner of Missoula Wine Merchants, made multiple deliveries of wine to his customers' homes on Wednesday afternoon. The shop offers free wine deliveries throughout the year, though the service has seen an uptick as local bars and restaurants are closed to dine-in service.

Ness offers contactless delivery, allowing his customers to stay at safe distances. The deliveries have allowed Ness to avoid laying off members of his staff.