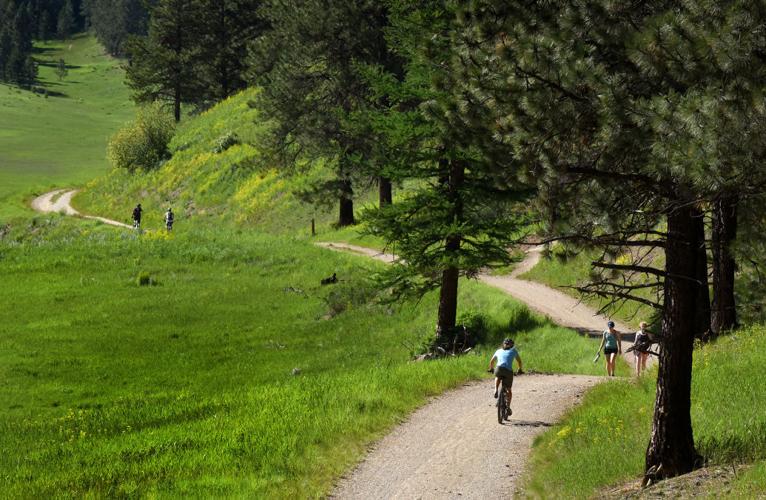 The Sawmill Gulch trail in Missoula’s Rattlesnake Valley is one of the most used local trails and caters to a variety of non-motorized use. Some 50 private, county, state, city, federal and social land managers are meeting in Missoula this week to discuss trail stewardship issues. 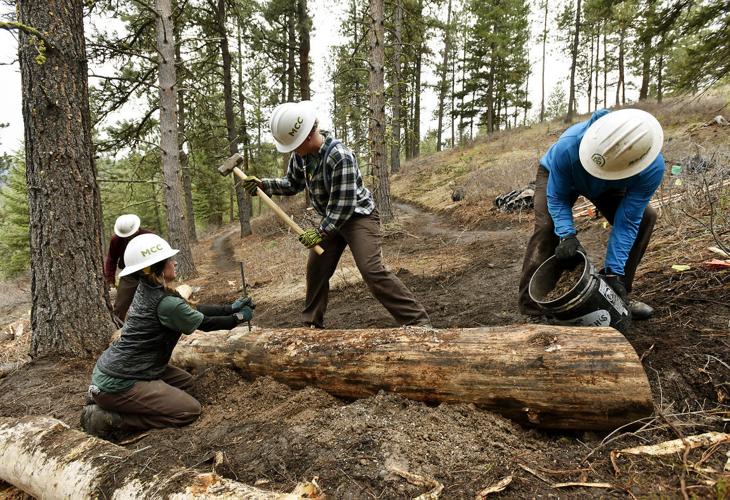 Renee Morley, Erika VanHavel and Bobby Grillo, from left, work in March 2015 to secure a log border on the switchback of a new section of trail built by the Montana Conservation Corps in Sawmill Gulch.

We humans have been making trails about as long as we’ve been banging rocks together, but that doesn’t mean we’ve mastered the task.

“When you have a trail that 90,000 people are going to use in a year, making it sustainable is an art form in itself,” said Morgan Valliant, Missoula’s conservation lands manager. “If they’re not sustainable, they take a heck of a lot of work to keep them from falling off the mountain.”

And that work varies depending on who uses the trail. Construction needs differ for walkers, horseback riders, bike riders, and motorized users. Different soils drain differently, and water is a trail’s worst enemy. Knowing how to keep them separate makes them last.

The art of trails will bring about 50 private, county, state, city, federal and social land managers to Missoula this week to share techniques, opportunities and phone numbers. Organized by the International Mountain Bike Association, the Montana Trail Stewardship Summit's activities range from panel discussions on user conflicts to pick-and-shovel time on a new Missoula-area trail route.

“Anyone that manages multi-use trails in Montana invited,” said Eric Melson, IMBA’s associate region director for the state. “There’s going to be some networking and getting to know one another. We’re encouraging this to be a very open discussion.”

A trail’s simple appearance belies its complex existence. The Kim Williams Trail heads east from Missoula starting on city land, across the University of Montana Campus, on to Milltown State Park, from which travelers might cruise around a private golf course or plunge into Lolo National Forest hillsides, and eventually reach the Five Valleys Land Trust holdings around Mount Dean Stone.

“A lot of users don’t recognize when they cross a boundary,” Valliant said. “So having some consistency in management is always a good thing.”

And management takes money. The Montana State Parks Department has a $1.8 million pool allocated from a federal highway bill trails program, which has everyone from private snowmobile clubs to the U.S. Forest Service seeking a share.

“We had 89 applicants last year,” said Pat Doyle, state parks spokesman. “The vast majority of the grants are used for development and maintenance, and they’re being relied on more and more every year.”

Forest Service Region 1 has about 28,000 miles of trail, mostly in Montana. It narrowly avoided losing nearly $1 million a year for the next three years in budget reallocations before Montana’s congressional delegation lodged complaints. But it still has about $25 million in deferred maintenance projects for its recreation facilities.

“Just trying to keep up with the workload, during a time when we’re seeing a generally increased use across this region and we’re facing budgets gradually declining, is a challenge,” said Kent Wellner, trails and dispersed recreation manager for Region 1. “That’s why we really rely on volunteers, folks like mountain bike clubs, backcountry horsemen and the Montana Conservation Corps for all aspects of recreation management.”

The three-day conference will have a number of hands-on events for land managers. Melson corralled a herd of mountain bikes for participants to ride through a demonstration route of cycling trail experiences. A project sponsored by Subaru/IMBA Trail Care Crew will cut several hundred feet of new tread near the summit of Marshall Mountain east of Missoula, on land recently acquired by Five Valleys Land Trust.

“I hope this is the beginning of a larger discussion on that topic,” Melson said. “We’re trying to take the temperature of where we’re at and share some great examples. We’d like to see this become a biannual sort of summit.”

GLACIER NATIONAL PARK – Less than a mile up the road from Avalanche Campground, the roar of a real avalanche overrode the burble of McDonald Creek.

When he was running up the record as Missoula’s longest-serving City Council member, Jack Reidy had a regular criticism of the Open Space prog…

A proposed 30 percent reduction in Forest Service trail maintenance budgets in Montana has been rescinded, according to U.S. senators Steve Da…

A legal change to allow bikes in federal wilderness hasn’t been introduced in Congress yet, but the issue already has advocates riled and rolling.

When Morgan Valliant took the job of Missoula conservation lands manager in 2008, he assumed he had about 25 miles of trail to look after.

If all goes well, there will be a new treeline at Council Grove State Park.

MILLTOWN – As traffic whizzed by on Montana Highway 210, Gwen Thibodeau weighed which part of a new bike trail to be most excited about: The s…

The new fire and aviation manager for U.S. Forest Service Region 1 hasn’t even been in office a week and he already has a tactical challenge s…

GRASS VALLEY – At one point six years ago, these pristine 75 acres of high-quality farmland west of Missoula were slated for a controversial 3…

It turns out those beers you drank at the Big Sky Concert Series shows this summer might actually have helped protect open space around Missoula.

Elk coming at Missoula from all sides

Don’t look now, Missoula, but the elk have us surrounded.

Details in the White House Christmas decorations you might have missed

French baguette may be included in UNESCO heritage list

French baguette may be included in UNESCO heritage list

The Sawmill Gulch trail in Missoula’s Rattlesnake Valley is one of the most used local trails and caters to a variety of non-motorized use. Some 50 private, county, state, city, federal and social land managers are meeting in Missoula this week to discuss trail stewardship issues.

Renee Morley, Erika VanHavel and Bobby Grillo, from left, work in March 2015 to secure a log border on the switchback of a new section of trail built by the Montana Conservation Corps in Sawmill Gulch.