Gale Sayers, Bears Hall of Fame running back, dies at 77

Bullet Joe, Spanky and a wild lefty did Missoula baseball proud
Share this
Return to homepage × 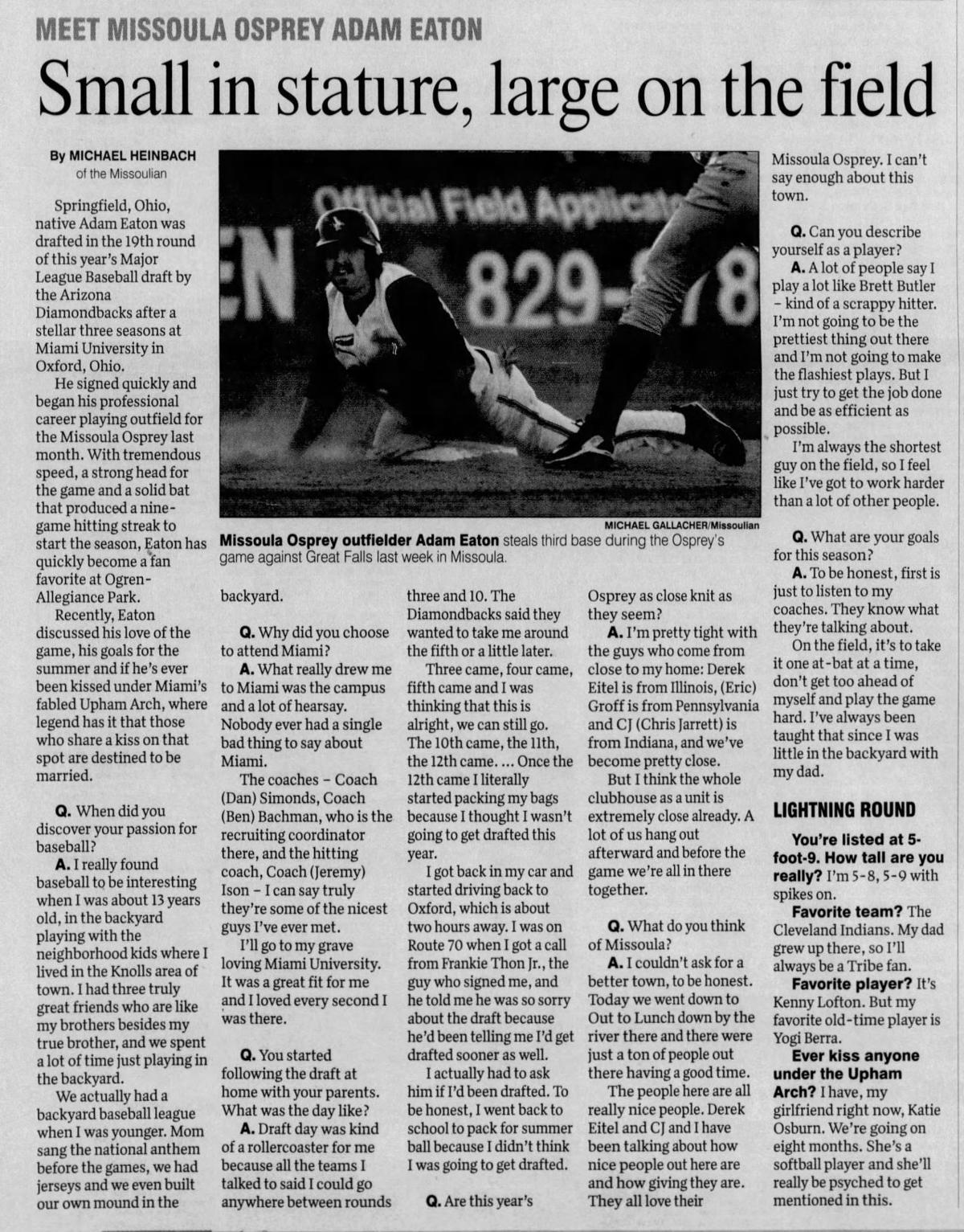 Leslie Bush: Accept congratulations on the fine game you pitched. Citizens are all rejoicing over your victory. Give regards to Bohen. MISSOULA FANS AT KELLEY'S.

“The above telegram was sent last night from men who saw Bush a year ago last spring when he was a green recruit in a class D league, to the pitching marvel who yesterday won from the Giants the third game of the world's series,” explained the Missoulian of Friday, Oct. 10, 1913. “It really came from every fan in Missoula. There are not wires enough out of the city to carry all the expressions of rejoicing that was evidenced yesterday.”

There’s a puzzle to solve here and we could use some help. But first:

Leslie “Bullet Joe” Bush pitched Philadelphia to victory over the New York Giants in Game 3 of baseball’s World Series, and Connie Mack’s Athletics went on to win the championship in five games.

Outfielder Adam Eaton hit .320 in the 2019 World Series for the Washington Nationals, who wrapped up their first championship last week against the Houston Astros.

The connection: Each started his pro baseball career in Missoula, Bush in 1912 with the Highlanders of the Union Association, Eaton in 2010 with the Osprey of the Pioneer League.

At 5-foot-9, “Spanky” Eaton was not the biggest man on the O’s roster, just as Heinbach was far from the tallest on the sports staff. In a column he wrote in 2012, Heinbach said he tries to remain objective about the players he covers but "unabashedly cheered" for Eaton.

“When I spent some time talking to Eaton on Media Day, I left impressed with his presence and his attitude,” he wrote. “But only after seeing him play did my mini-crush shift into overdrive.

"He is the kind of ballplayer anyone can cheer for. He’s the undersized underdog, playing with a smile on his face and wearing the dirtiest uniform in the ballpark while playing every out as if it might be his last on the ballfield."

As an Osprey, Eaton hit for average (.385) and power (25 extra-base knocks, including seven home runs.) He used his speed to steal 20 bases "and track down everything hit in his direction in the outfield," Heinbach wrote. "He even led the league in being hit by pitches, proving he would do anything to help the team.”

Eight men have earned World Series rings after playing for or coaching Garden City nines. The list includes pitcher Jim “Kitty” Kaat with the St. Louis Cardinals in 1982, first baseman Lyle Overbay in his first months with the Arizona Diamondbacks in 2001, Florida Marlins manager “Trader Jack” McKeon in 2003, and catcher Miguel Montero with the Chicago Cubs in 2016.

The Nationals had two other ex-Osprey in their dugout: bench coach Chip Hale, who managed the O's in 2000 and 2001, and pinch-hitter Gerardo Parra, perpetrator of the Baby Shark act that swept National Nation this fall.

Bullet Joe Bush pitched for two more world champions, in 1918 with Babe Ruth and the Boston Red Sox and in 1923 with Ruth and Miller Huggins’ New York Yankees. He retired in 1928 after 17 seasons and 196 victories, 26 of them for the Yankees in 1922.

It was sent soon after Bush’s 8-2 victory at the Polo Grounds in New York by fans at Owen Kelley’s Cigar Store on Higgins Avenue. Kelley was a Highlanders teammate of Bush’s and Missoula’s Mr. Baseball. His store was a local sports hangout, where you went to buy tickets to a Grizzly football game or for a ride on the electric streetcar.

The line that trips: Give regards to Bohen.

Who in the heck was Bohen? A search through Missoulian archives from 1913 found clues.

Pat Bohen was a “Helena castoff” when Highlanders manager Cliff Blankenship brought him to Missoula in May to pitch. The lefty was a notoriously wild but effective pitcher, and on Oct. 1 came a wire dispatch from Washington. By then Bush and Philadelphia had clinched the American League pennant.

“Washington made it three straight shutouts by winning from Philadelphia today, 1 to 0," the report said. "Again the champions played none but second string men, but they forced the locals to hustle in order to win. Bohen, one of Connie Mack's youngsters, recruited from Missoula, Mont., pitched a splendid game. Two of the three hits he allowed came in the eighth, when Washington won.”

Years later Ray T. Rocene recalled the 1913 Highlanders in his Sports Jabs column: “Paddy Bohen, Missoula pitcher, was sold to the Philadelphia Athletics, and wound up at Reading the next season, winning 20 games while losing nine. … Paddy was one of the wildest men off and on the diamond Missoula ever saw.”

Bohen had a one-inning, two-run stint for Pittsburgh in 1914. He died in 1942 at age 51 in his hometown of Napa, California. The two appearances were all he had to show for a major league career, along with the regards from Kelley’s Cigar Store in Missoula, passed on by Bullet Joe Bush.

The question that seeks an answer: Did the Athletics follow up those regards with a World Series ring?

Missoula Rewound is a weekly look through the Missoulian online archives, missoulian.newspapers.com, for stories from western Montana's past.

The Missoulian's Ray Rocene reflected on Missoula's last "wild west" days before aWorld War I, when gunplay was common and the red-light district was booming.

Another dam story from the Rattlesnake

William A. Clark owned a lot of things in and around Missoula in 1912, but he didn’t stop in to visit them often.

The start of a wondrous winter journey

The last dog of the 35th Montana Race to the Sky sled dog race probably won’t cross the finish line in Lincoln until sometime Tuesday. For the record, the lead dog on the first team in the initial race in 1986 was named Jingles.