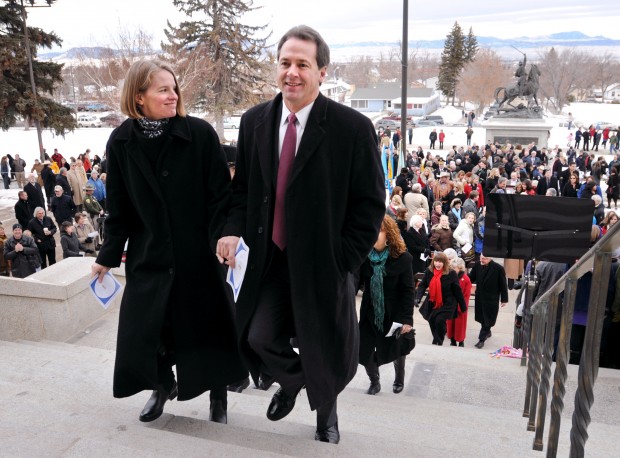 Montana Gov. Steve Bullock and his wife Lisa ascend the steps of the state Capitol on Monday morning shortly after Bullock was sworn in as the 24th governor of the state of Montana. 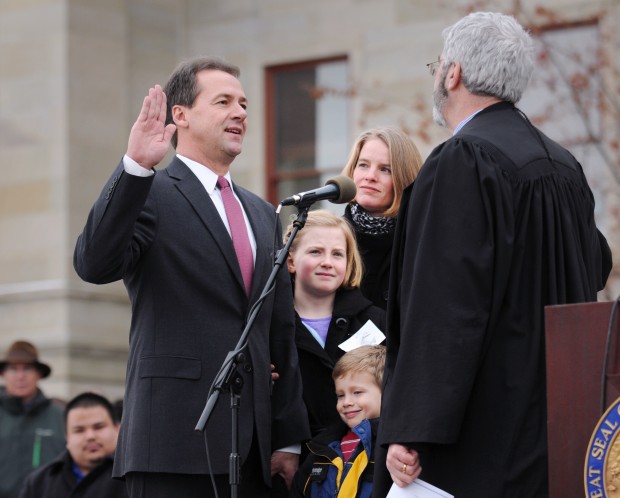 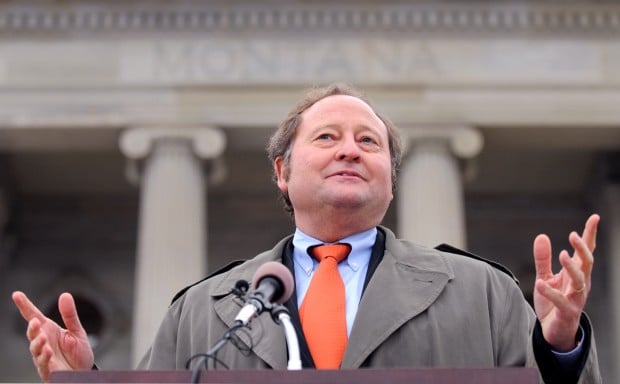 The ceremony marked the farewell – at least for now – of Gov. Brian Schweitzer. 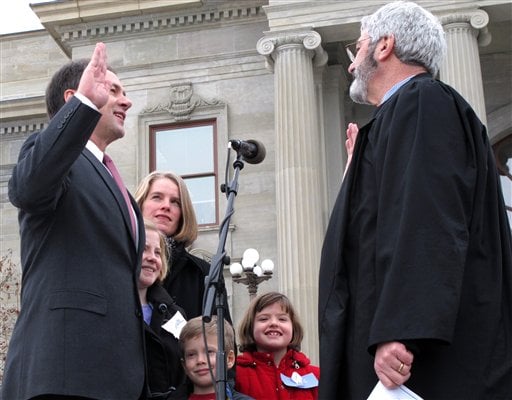 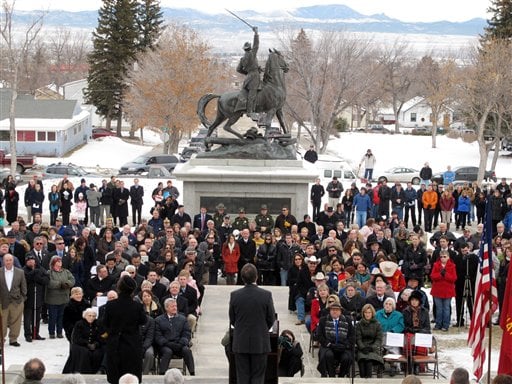 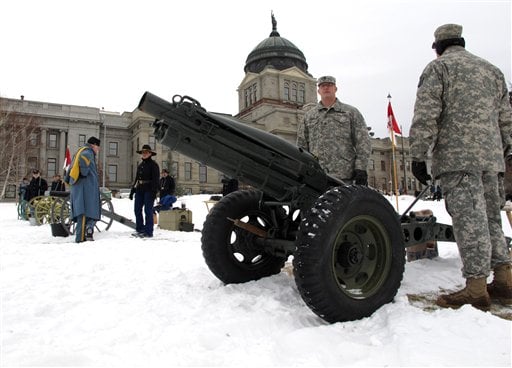 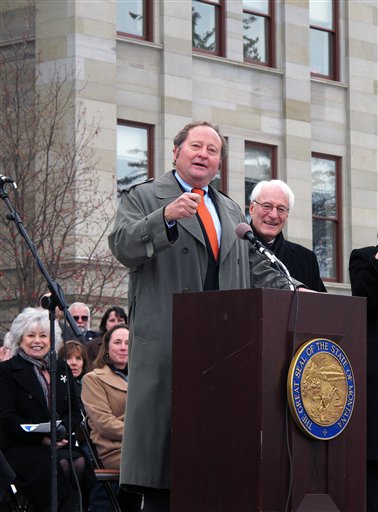 Montana Gov. Steve Bullock and his wife Lisa ascend the steps of the state Capitol on Monday morning shortly after Bullock was sworn in as the 24th governor of the state of Montana.

The ceremony marked the farewell – at least for now – of Gov. Brian Schweitzer.

HELENA – Steve Bullock was sworn in Monday as Montana’s 24th governor, with a pledge to work across party lines to achieve “amazing things” for the state.

The top leaders of the Republican-controlled House and Senate echoed the come-together theme in their speeches to their respective chambers.

Montana Supreme Court Chief Justice Mike McGrath administered the oath of office to Bullock before a crowd of 600 people in an outdoor ceremony in 25-degree weather in front of the Capitol. Bullock kissed his wife, Lisa, before taking the oath.

Jay Dusty Bull of the Blackfeet Nation sang and played the drum to a song he had composed for the occasion on behalf of Montana’s eight Indian nations.

The Central School Choir, which included Bullock’s two daughters, stood on the Capitol steps and sang “What a Wonderful World,” “Build Me a World” and “Montana.”

Two Montana Air National Guard F-15s roared through the skies at the close of the inauguration ceremony, followed by a 19-gun cannon salute by the 89th Montana Cavalry and 2nd U.S. Cavalry Association.

Bullock, formerly the state’s attorney general, told the audience that Montanans have given him “an incredible responsibility and opportunity” to make the state a better place to live, work, build a business and raise a family.

Bullock, a Democrat, will be dealing with a Legislature that has large Republican majorities in both the House and Senate.

“Before any of us were Democrats or Republicans, we were Montanans,” Bullock said. “Let’s never forget that. And let’s never forget the small businesses, the middle-class families, the college students and the retirees who elected us to serve.

“They won’t measure our success by political points scored or zingers flung out on the front page of the newspaper. I look forward to working with you, regardless of the partisan labels attached to your names.”

Top leaders of the Republican-controlled House and Senate struck a similar chord.

“The 63rd Legislature means an open door and a new opportunity and change of tone between the executive branch and legislative branch,” said House Speaker Mark Blasdel, R-Somers. “Let’s make this session more about work and less about politics.”

“I look forward to working with Gov. Bullock to find solutions that will move our state forward,” said Senate President Jeff Essmann, R-Billings. “And I’m hopeful that we can build a relationship with the executive branch built on trust and respect, not a relationship built on controversy.”

His comment was an apparent reference to the stormy relationship that Bullock’s predecessor, Democratic Gov. Brian Schweitzer, had with the Legislature, particularly in 2011.

Despite the pitches for working across party lines, sharp differences exist between Bullock and the GOP majorities on such major issues as the state budget, taxes, health care, pensions and social issues.

In his 12 1/2-minute speech, Bullock said Montanans all want the same things: “Safe schools and a world-class education. Good-paying jobs that grow Montana’s middle class. Access to public lands and blue-ribbon trout fisheries. And the ability to work hard in your career and grow old in a place you love.”

Bullock said the opportunity is there for the Legislature and governor to do “amazing things” for Montana.

“We’ll improve our schools and by doing so, expand opportunities for Montana businesses and workers,” the new governor said. “We’ll continue to grow our economy, foster 21st century industries and create jobs that didn’t even exist when we were children.

“We’ll maintain our rural traditions, our agricultural heritage and our breathtaking landscape. And we’ll do so with respect and compassion for those around us.”

Bullock, who has three children younger than age 10, thanked them for sharing their dad with the rest of Montana.

“I hope that – throughout this journey – you will always know that my most important job is being your father, and over time, you recognize that the reason I sought this office has more to do with you and your generation’s future, rather than me or mine.”

The ceremony marked the farewell – at least for now – for Schweitzer. The outgoing governor, quoting his late mother, predicted great things of Bullock because he is a wonderful father and has a great family.

“I also know that Steve Bullock – Gov. Steve Bullock – knows that the government’s for the last and the least,” Schweitzer said. “For the first and most, you’ll make your own way. You’ll protect those who need protecting.

“And the mark of a great leader has been demonstrated to us by the first Montanans. A great leader is the one who fulfills the dreams of your grandparents by protecting the future of our grandchildren.”

Missoulian State Bureau reporter Charles S. Johnson can be reached at (406) 447-4066 or at chuck.johnson@lee.net.

Schweitzer leaves office with no regrets

5 things to know on Inauguration Day in Montana

HELENA — A look at Monday's inauguration of Gov. Steve Bullock and the opening of the 2013 legislative session.

HELENA – An inaugural ball is scheduled for Feb. 9 in Helena to celebrate the inauguration of Gov. Steve Bullock and Lt. Gov. John Walsh and t…