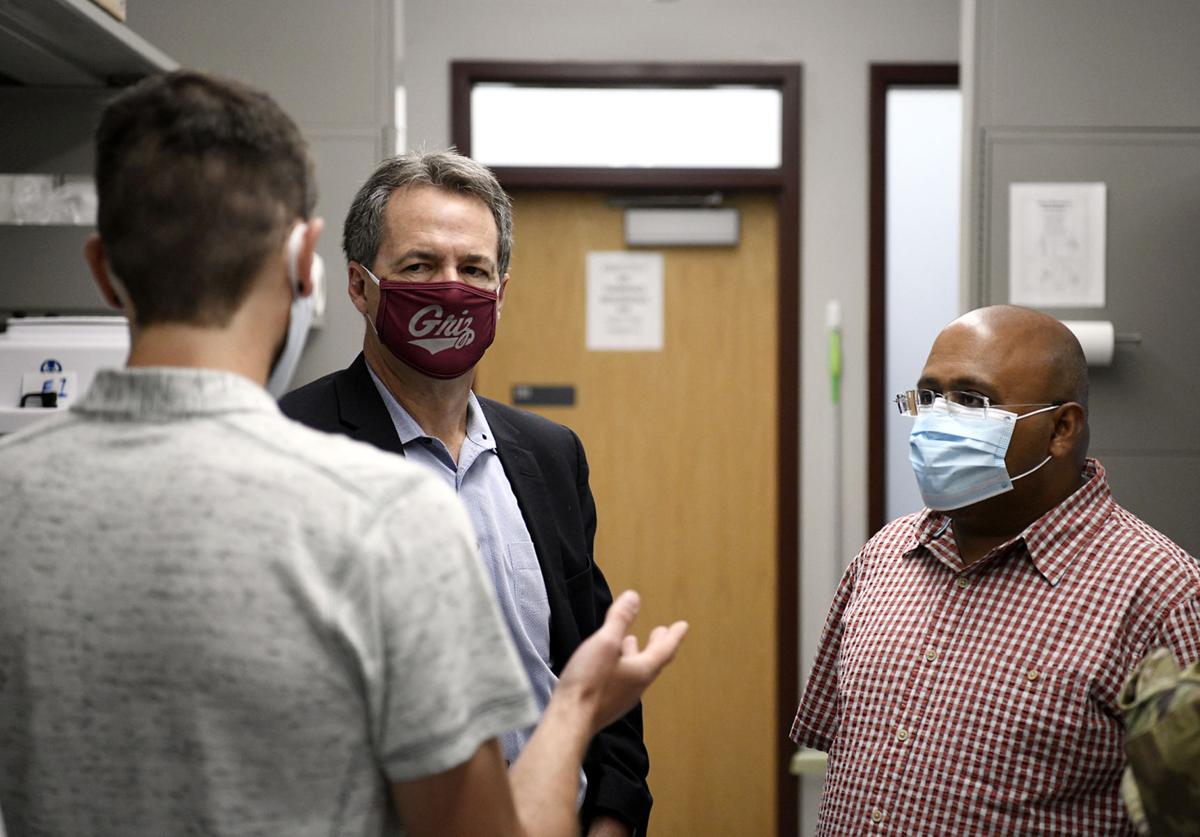 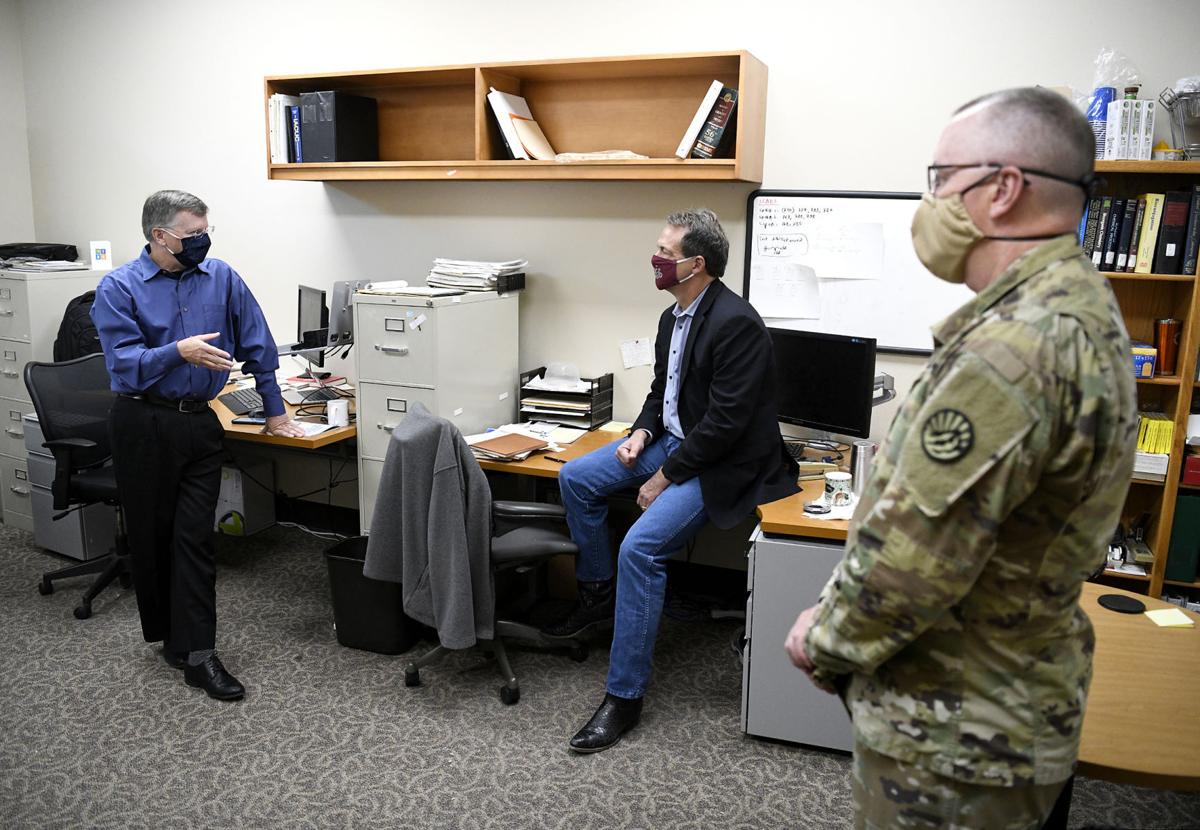 FYR Diagnostics, a molecular diagnostics company, is in the time-consuming and expensive process of developing a new rapid test for COVID-19. The company was awarded $25,000 in grant funds from the Coronavirus Relief Fund for the project, and Bullock received a tour of its facilities and saw the rapid test running in real time.

“As we’re all dealing with this global pandemic, you have some incredible companies here in Montana trying to figure out how we can do better, more effective testing,” Bullock said. “It’s really exciting to see what FYR’s doing, and any assistance that we can provide, of course, we will.”

Before the coronavirus, the diagnostics company was focused primarily on agricultural and neurological diseases.

The tests FYR is developing differ from the typical COVID-19 rapid tests being produced around the nation in one key way. The usual rapid tests are called RT-PCR tests, an acronym that stands for reverse transcription-polymerase chain reaction. These tests are thought of as the most sensitive, thus best at detection, in the country. FYR’s tests aim to use an equally-sensitive but alternative approach called isothermal amplification.

Sarj Patel, president of FYR, and Chris Booth, CEO, explained the difference. In a nutshell, RT-PCRs have to cycle between temperatures to produce a result; isothermal tests do not.

“RT-PCR (tests) are kind of like the gold standard for molecular diagnostics or virus pathogens in general,” Booth said. “But you can only change temperatures so quickly, even with very expensive machines. With isothermal, we are able to hold a single temperature and get a result in 30 minutes.”

Booth said FYR’s tests are exactly on par with the typical RT-PCRs for sensitivity, and specifically tailored to detect COVID-19 as opposed to any amount of viral substance.

The team at the lab has submitted its study design to the Food and Drug Administration and feels it has some momentum. The timeline is still in terms of months, not weeks or days, said Patel, but once approved, the test can be administered throughout Montana.

Once testing is underway, Booth and Patel are hopeful to not only get people their accurate results faster, but test more people in the same amount of time.

The team at FYR has encountered many challenges in the development of these rapid tests. From the state-wide shutdown to an uncertain timeline, both Booth and Patel have had to find ways to adapt in a quickly-changing world. It’s led to some disappointing delays.

“We really thought we had a shot at developing something new for COVID (in March), and we were optimistic that we could get it to work,” Patel said. “But, you know, there are lots of challenges in developing a new test from scratch. Lots of highs and lows. But we stuck at it.”

Montana researchers and institutions are responding to COVID-19 on numerous fronts. Rocky Mountain Labs, one of nine Level IV bioscience facilities in the country, is based out of Hamilton and currently has five teams focused on coronavirus response. The University of Montana has a team researching vaccination options, and Montana State University partnered with the state to conduct large-scale surveillance testing.

Montana is also on the national stage due to a rapid and concerning spike in cases. Where the state once went days with only single-digit case jumps in April and May, it is now not uncommon to see back-to-back days with more than 100 cases. In July, the state reported 14 days with triple-digit case increases. Montana hit a daily peak of 221 positive cases on July 24.

Bullock said every positive case is concerning, but he pointed toward some hopeful numbers as well.

“We’re among the lowest per capita, positives, deaths and hospitalizations in the continental U.S. and, over the last three weeks, the increases have flattened out,” he said.

Last month, the state surpassed the governor's goal to test 60,000 Montanans per month by nearly 10,000 people. The operation ran into some snags, however. One of the out-of-state labs Montana sent its test to did not have the capacity to analyze and send results back, Bullock said. And test shortages are on the forefront of officials’ minds as cases continue to increase.

“Certainly there’s been a lot of hiccups over the last four and a half months, when our capability and capacity to do the number of tests that we need ran into a stumbling block,” Bullock said. “But we’ve worked around it."

Before the eventual arrival of a vaccine, Montana needs to advance its testing infrastructure, said both Booth and Patel. That's because in order for someone to receive a coronavirus vaccine, that person must first test negative for COVID-19. In order to do that, they must have access to testing that doesn’t require a sometimes multi-week wait.

“In order to get a vaccine, you’re going to have to actually test negative first,” Booth said. “And while that’s a little bit in the future, we can at least work on getting the infrastructure so the state is ready.”

Added Patel: “We just want to impress on (Bullock) the work that’s being done here in Missoula, at a small start up company trying to tackle a very big problem. Having him come here shows that he understands the importance of companies like ours to help tackle issues like this within the state and for the state.”

Tuesday, Bullock also visited Inimmune and Hellgate Elementary. Inimmune, a biotech company that partnered with UM to develop a vaccine against COVID-19, recently received a $2.5 million grant for vaccine research from the National Institutes of Health. At Hellgate Elementary, Bullock joined the Montana National Guard to deliver personal protective equipment to staff as they prepared for the opening of the school.

A new place to get house-made soups, sandwiches, salads, desserts and beverages opened up in Missoula's Northside neighborhood last week.

The wildfire west of Dixon stood unchanged at 3,539 acres on Monday, with crews reporting 62 percent containment.