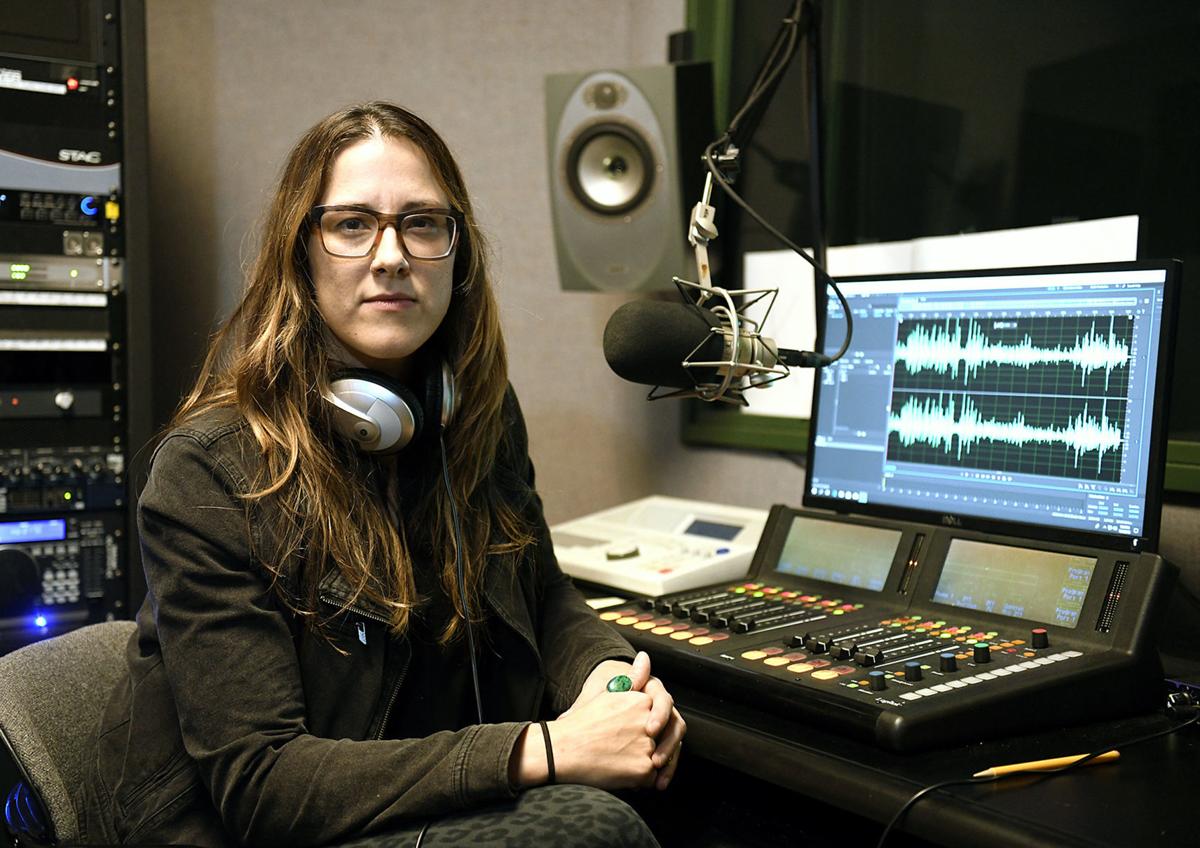 Leah Sottile's two-season podcast, "Bundyville," looks at the story of the Bundy family and their rebellion against the federal government that drew sympathizers and critics, and led to two armed standoffs. Sottile, the T. Anthony Pollner Distinguished Professor this fall at the University of Montana School of Journalism, will give a talk on Monday about her experience reporting on the Bundys. 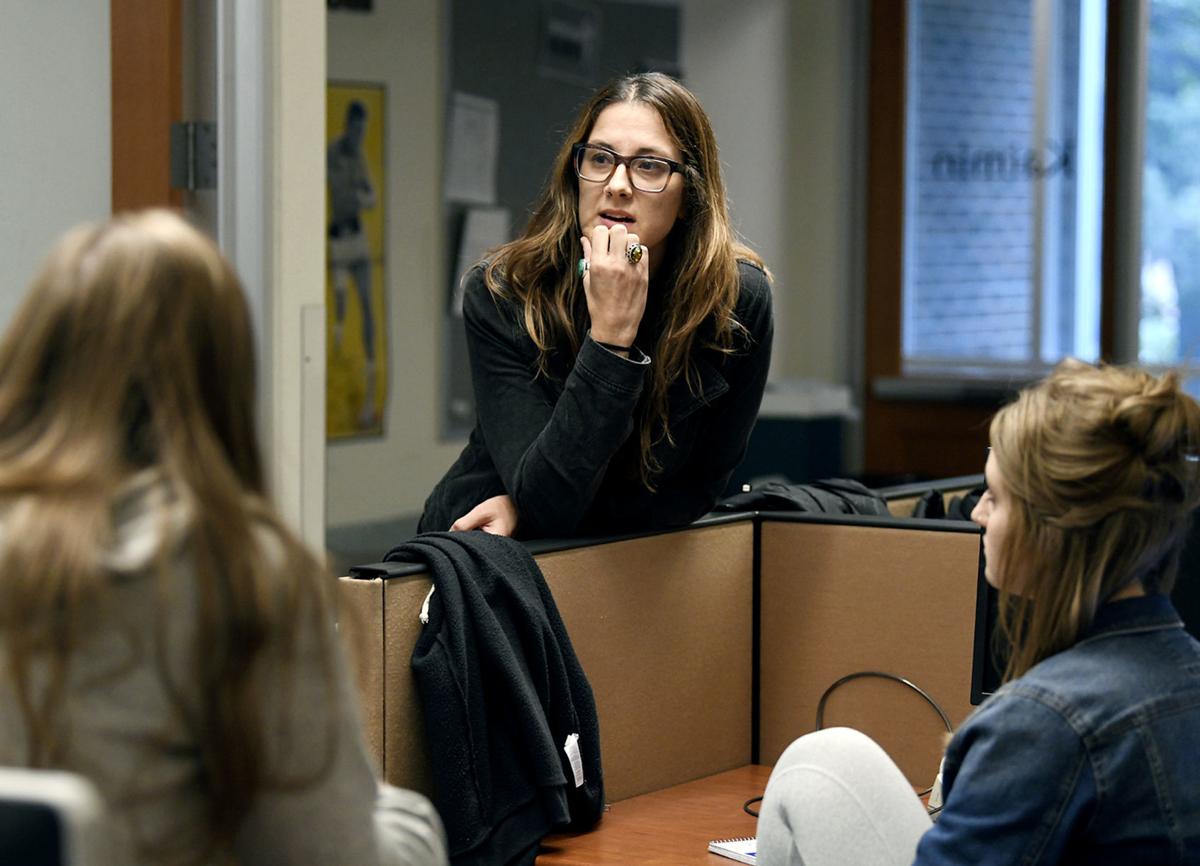 Sottile talks recently with Montana Kaimin editor-in-chief Cassidy Alexander, left, and arts and culture editor Erin Sargent in the office of UM's student newspaper. As the Pollner professor, Sottile advises the Kaimin and teaches a course at the School of Journalism.

Leah Sottile's two-season podcast, "Bundyville," looks at the story of the Bundy family and their rebellion against the federal government that drew sympathizers and critics, and led to two armed standoffs. Sottile, the T. Anthony Pollner Distinguished Professor this fall at the University of Montana School of Journalism, will give a talk on Monday about her experience reporting on the Bundys.

Sottile talks recently with Montana Kaimin editor-in-chief Cassidy Alexander, left, and arts and culture editor Erin Sargent in the office of UM's student newspaper. As the Pollner professor, Sottile advises the Kaimin and teaches a course at the School of Journalism.

Like a lightning strike on a pile of sun-baked sagebrush in August, the saga of the Bundy family and their rebellion against the federal government was just a spark that ignited a long-simmering fuel of anger and frustration in America from supporters and those opposed to federal management of public lands.

Leah Sottile, a visiting professor this semester at the University of Montana School of Journalism, has compiled an exhaustively researched, balanced audio narrative looking at the whole episode. She and her team started with the origins and continued to the play-by-play details and fallout from two armed standoffs that drew global attention to the idea of anti-government sympathizers in America. Her two-season podcast in collaboration with Longreads and Oregon Public Broadcasting, called “Bundyville,” has over 1 million listens.

Monday night, Sottile will be giving the annual T. Anthony Pollner Lecture on campus about her path to journalism and her experience of digging into the Bundys’ lives.

“I’ll be talking about how .… all the stories I was working for years were sort of leading me to have a particular expertise on discontent in the rural American West,” said Sottile, podcast host and reporter. “I’ll kind of take people on a track through all the stories I’ve worked on, and I’ll talk significantly about the Bundyville project.”

In 2014, cattle rancher Cliven Bundy and his family, who had refused to pay grazing fees for decades in Nevada, alleged their use of federal land was a God-given right and engaged in an armed standoff with law enforcement. Their protest struck a nerve with many people: Some saw the family as martyrs leading a revolution against government overreach, while others saw them as lying grifters trampling public lands and natural resources without paying their fair share.

Whatever the opinion, and there were many, the episode captured the attention of America and its media.

Then, in 2016, Cliven’s son Ammon Bundy and other members of non-government militias and the sovereign citizen movement executed an armed seizure and occupation of the Malheur National Wildlife Refuge in Harney County, Oregon. In essence, they wanted to highlight what they viewed as states' rights to federal land. One man, Robert LaVoy Finicum, was shot and killed during an attempt by law enforcement to arrest the militants. The incident further polarized America, dividing those who stood with the Bundys, those who were vehemently opposed to their ideology, and everyone in the middle.

Sottile is a freelance journalist who has written for The Atlantic, The New York Times Magazine, The Washington Post and the Pacific Northwest Inlander, an alt-weekly in Spokane. She attended many court hearings when Ammon Bundy and others were on trial for the Malheur occupation.

“The thing that was frustrating was many people were making quick assumptions, but they didn’t understand, and I didn’t understand, clearly how (the Bundys and their supporters) got to believe what they believe,” she said. So she spent a good portion of three years conducting interviews with Cliven and his son and many others, diving deep into why the Nevada and Oregon incidents happened.

“It’s very public lands-focused, especially in the first season,” Sottile explained. “I think that when you have so much of the land of the West that is managed by the federal government, and people are reliant on extractive industries for their jobs, I think just this combination of federal government with like the multiple uses on federal lands is where a lot of the Bundy discontent starts.”

The western U.S. has attracted many people who don’t appreciate federal management or environmental regulations or user-fees for public lands, she noted.

“The West is filled with people who want to be away from the government, if we think of like D.C. as the beating heart of the federal government, so the further you get west the more people you’re going to find who want to be away from that control,” she said. “I also think that historically, in the reporting that I’ve done, a lot of groups of people who’ve come west to get away from society to try to strike it out on their own and so any encroachment on that perceived freedom that you have breeds discontent for sure.”

The podcast is a detailed, well-written and organized ride into the lives of various characters involved in the battle over public lands, from politicians who seized on the Bundys’ messaging to white supremacists and anti-government terrorists like Jerad Miller and his wife, Amanda, who killed two police officers and another person in 2014 in Las Vegas and draped one body with anti-government symbols and a swastika. Miller had interviewed Cliven Bundy and lived on his ranch, and Sottile explores how people with anti-government views found a type of inspiration in the Bundys’ movement. Sottile says the Bundys have disavowed Miller and told her they kicked him off their ranch, but she found no evidence that Miller was kicked off the Bundy ranch.

“I think we have seen through the media that words matter, and what powerful people say can resonate with people who have maybe violent ideas,” she said. “The Bundys are willing to welcome those kind of people under their umbrella to get what they want. So they will turn a blind eye to certain things when it behooves them.”

Sottile believes there are many reasons why the Bundy family’s standoffs with the government resonated with Americans, such as Montana state Sen. Jennifer Fielder, a Republican from Sanders County, who invited Cliven Bundy and his son to Paradise, Montana, last year to give a speech.

“It’s that image of the good cowboys trying to work the land,” Sottile said. “It just shows how powerful that is, the symbol of the American cowboy. The Bundys were unique in Western extremism.”

In that speech, Cliven Bundy's other son Ryan explained the essence of his family's argument.

"Does the state of Montana own 100% of its land and resources?" he asked. "No. So Montana must not be a state. It's more like a subdivision, like a province, like a district. We're being treated as provinces, not states. The central government is acting as an empire and not just as a central government to protect our rights."

But people like Aaron Murphy, the executive director of Montana Conservation Voters, have been trying to push back on what the Bundys espouse.

"Occupying public property and claiming a sole right to our public land with guns on your belt doesn't make you a hero; it makes you a terrorist," Murphy told the Missoulian. "If armed standoffs are ever successful in resolving disagreements about the places all of us own, then we will have failed our kids. Hopefully what happened in Oregon reminded all of us, Republicans, Democrats and everyone in between, that terrorism has no place in this country, ever."

It is those wildly diverging viewpoints that Sottile captured in her podcast, walking the middle ground in providing listeners an unbiased perspective. In addition to the two seasons of Bundyville (14 episodes), she noted there are nine long-form print stories with "a ton" of information that didn't make it in the podcast.

Sottile is the T. Anthony Pollner Distinguished Professor for the fall at the University of Montana School of Journalism. She’s teaching a course in narrative writing and the business of freelance journalism and is also advising the student newspaper, The Montana Kaimin. The Pollner professorship was created in 2001 by the family and friends of T. Anthony Pollner, a 1999 School of Journalism alumnus who died in a motorcycle accident.

Associate journalism professor Jule Banville was on the committee that hired Sottile.

“Her reporting for Bundyville is astonishing,” Banville said. “She reported the sh-- out of that. She digs and understands how to get information. And she’s amazing at translating really complicated events and movements to all of us. She’s also fair and accurate and has a great voice. It’s a big deal in podcasting, and we’re super thrilled to have her teaching here.”

Sottile’s lecture, entitled “Stories of the Wild, the Innocent and the Downright Disregarded,” will take place on Oct. 7 at 7 p.m. at the University Center Theater on the UM campus. It’s free and open to the public.

This story has been updated to correct the spelling of Leah Sottile's name.

PARADISE — Wearing a pin that read "Not Guilty!" on his suit jacket, Nevada rancher Cliven Bundy walked into the historic Old Paradise School …