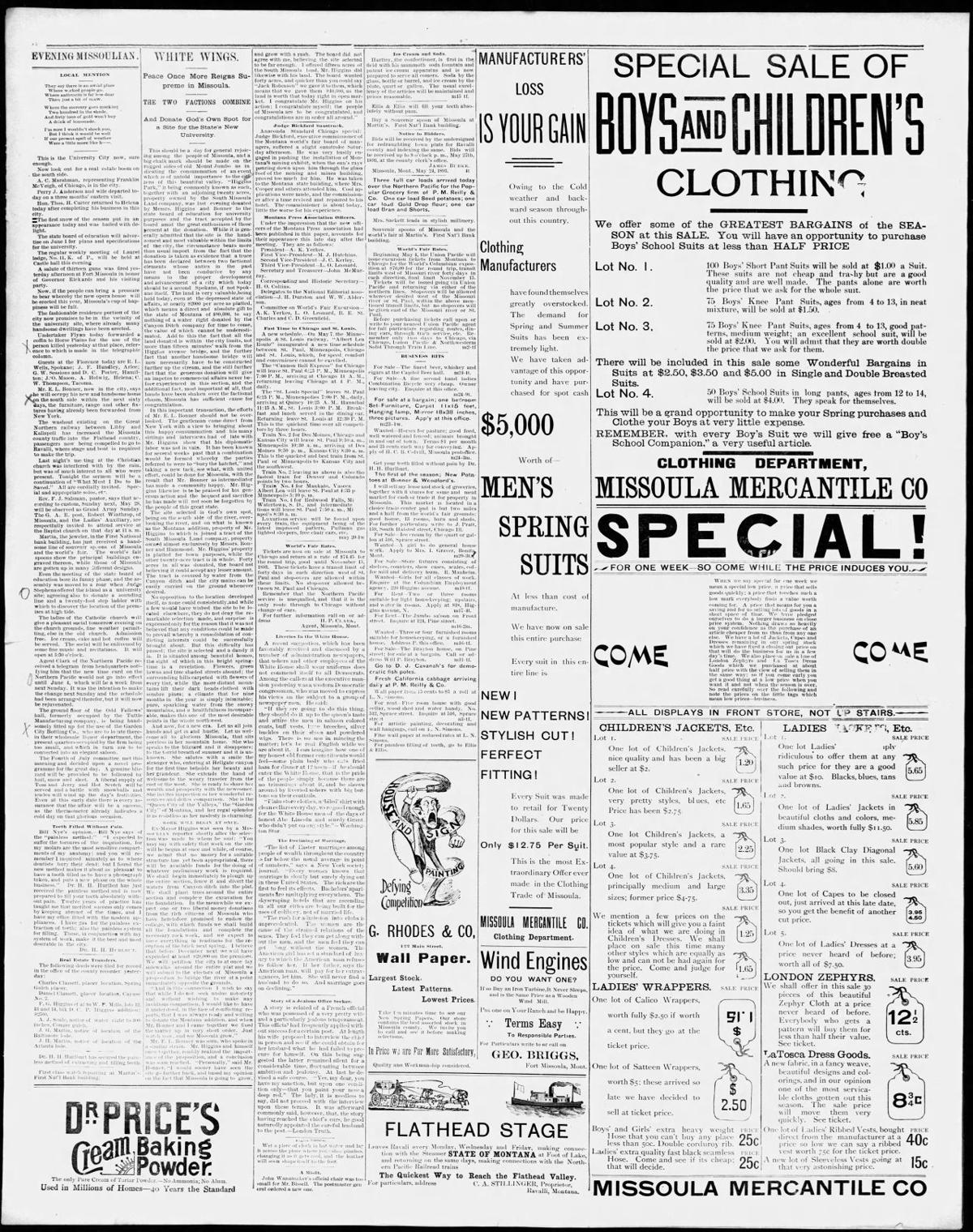 Here’s a creation story that 10,000 or so University of Montana students might enjoy hearing as classes open this week. Anyone else can listen too.

First some background. Missoula’s early history is colored, or clouded, by the tensions between two competing commercial factions. The popular version of this pits one C.P. Higgins, a co-founder of the town, against A.B. Hammond, whose ruthless business practices made him, in the going view, the devil incarnate.

The feud is the reason, for instance, that we have a crazy system of streets, some going one direction and others slanting off in another. But that’s a different story.

By May 1893 Higgins was dead. His son Frank had just served a one-year term as mayor and was doing his darnedest to keep afloat in this frontier town during the financial panic of 1893. Hammond was running roughshod, flaunting his success with his power corner at the intersection of Front Street and, yep, Higgins Avenue. His First National Bank, his Hammond block, his Florence Hotel and his Missoula Mercantile each occupied a corner.

What’s often overlooked is that Hammond’s boss and mentor was back in town. E. L. Bonner, whose facial hair Hammond emulated and whose initialed first name he adapted (no Edward and Andrew for these two), was a more restrained, conservative soul. Years before, along with Richard Eddy, Bonner had hired the younger Hammond to run the Merc and with power connections in his native New York he had much to do with nearly every railroad in the territory. The lumber town out east bore Bonner’s name not just because he had been president of the Montana Improvement Co. that built the mill there but because, when the new Northern Pacific Railroad put a signal stop on its line there in 1885, it was called Bonner Station.

In 1893 the state legislature awarded Missoula a state university. The ideal spot for it, town fathers believed, would be 40 acres on the south bank of the river at the base of Mount Sentinel. The Higgins family owned 20. Bonner had recently retired back to Missoula from Deer Lodge. He and Hammond, principals in the South Missoula Land Co., owned the other 20 coveted acres.

All of which leads to this delightful and, it says here, fundamentally historic story published on May 24, 1893, in the Missoulian under the headline(s):

White Wings. Peace Once More Reigns Supreme in Missoula. The Two Factions Combine. And Donate God’s Own Spot for a Site for the State’s New University.

So as not to sully the impact, the first few paragraphs are presented here verbatim.

“This should be a day for general rejoicing among the people of Missoula, and a big chalk mark should be made on the rugged sides of old Mount Jumbo as indicating the consummation of an event which is of untold importance to the citizens of this beautiful valley. ‘Higgins Park,’ it being commonly known as such, together with an adjoining twenty acres, property owned by the South Missoula Land company, was last evening donated by Messrs. Higgins and Bonner to the state board of education for university purposes and the tract accepted by the board amid the great enthusiasm of those present at the donation.

“While it is generally admitted that the site is the handsomest and most valuable within the limits of the city, the circumstance bears more than usual import from the fact that the donation is taken as evidence that a truce has been declared between two factional elements whose antics in the past have not been conducive by any means to the proper development and advancement of a city which today should be a second Spokane, if not Spokane itself.

“The land is very valuable, being held today, even at the depressed state of affairs, at nearly $2000 per acre as platted, which means a direct and absolute gift to the state of Montana of $80,000, to say nothing of a water right donated by the Canyon Ditch company for time to come, the value of which cannot be underestimated. Add to this the fact that all the land donated is within the city limits, not more than fifteen minutes’ walk from the Higgins avenue bridge, and the further fact that another handsome bridge will now necessarily have to be constructed further up the stream, and the still further fact that the generous donation will give an impetus to commercial affairs never before experienced in this section, and the additional fact, most important of all, that hands have been shaken over the factional chasm, Missoula has sufficient cause for congratulation.

“In this important transaction, the efforts of Mr. E.L. Bonner should not be overlooked. The gentleman came direct from New York with a view to bringing about this happy consummation and his many sittings and interviews had of late with Mr. Higgins show that his diplomatic labor was not in vain. It has been known for several weeks past that a combination would be formed whereby the parties referred to were to ‘bury the hatchet,’ and taking a new tack, see what, with united effort, could be done for Missoula, with the result that Mr. Bonner as intermediator has made a community happy. Mr. Higgins likewise is to be praised for his generous action and the bequest and sacrifice he has made will not soon be forgotten by the people of this great state."

“The site selected (for the University of Montana) is God’s own spot, being on the south side of the river, overlooking the river, and on what is known as the Montana addition, property of Mr. Higgins to which is joined a tract of the South Missoula Land company, property owned almost exclusively by Messrs. Bonner and Hammond. Mr. Higgins’ property is platted for town purposes, while the other twenty-acre tract is in whole. Forty acres in all was donated, the board not believing it could accept any lesser amount. The tract is covered by water from the Canyon ditch and the city mains can be easily carried on the ground whenever desired.

“It is situated among beautiful homes, the sight of which in this bright springtime is a revelation. Flowers, green lawns and tree shaded streets abound; the surrounding hills carpeted with flowers of every tint, while the more distant mountains lift their dark heads clothed with somber pines; a climate that for nine months in the year is simply inimitable; pure, sparkling water from the snowy mountains, and a healthfulness incomparable, makes this one of the most desirable points in the whole northwest."

LINCOLN — This was the idea last mid-month: to see what splendor the June full moon would deliver to the sculpture park east of town.

An island tribute that was lost in time

The defending national football champions got a scare when they stayed the night in Missoula in 1936.