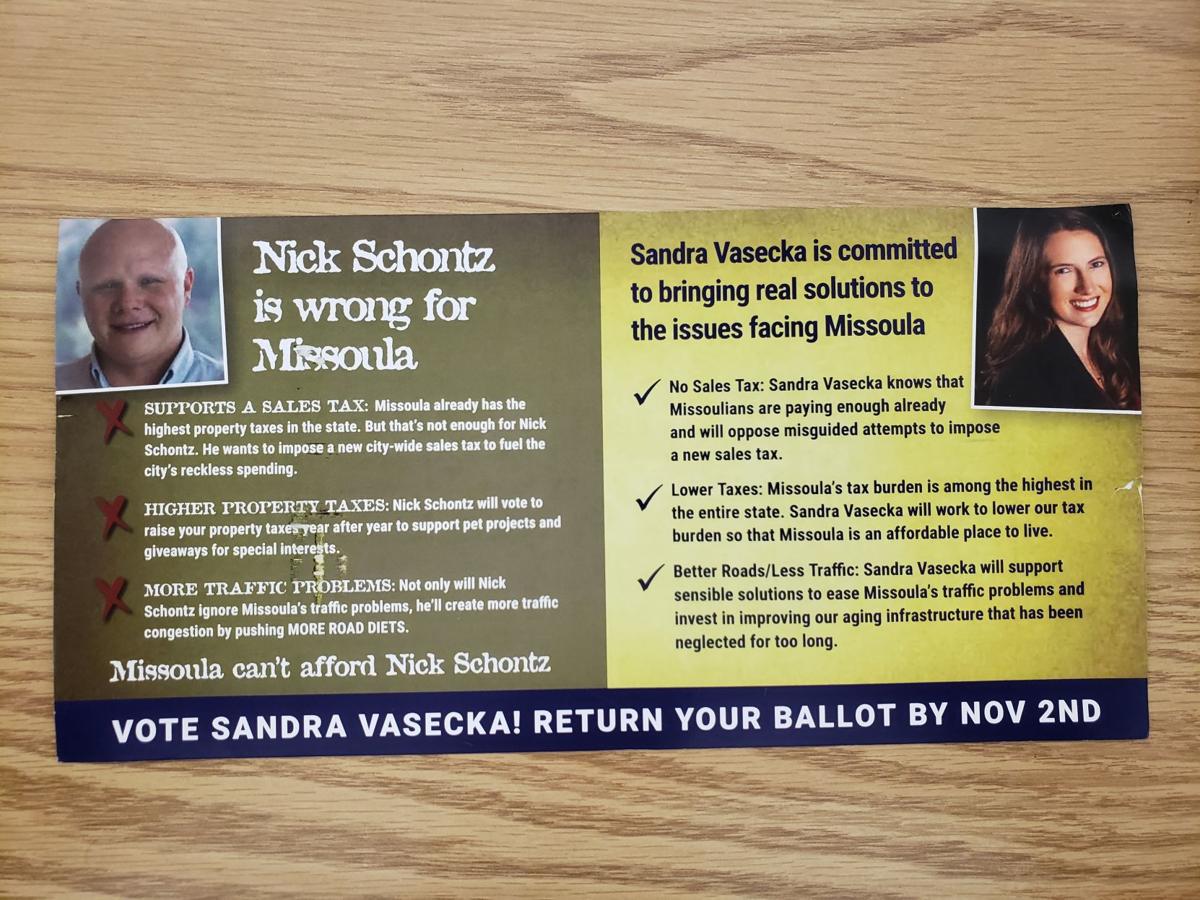 A series of political attack ads, like this one for Ward 6, for the Missoula City Council election were mailed to Missoula voters Monday, funded by a group of wealthy local business owners. 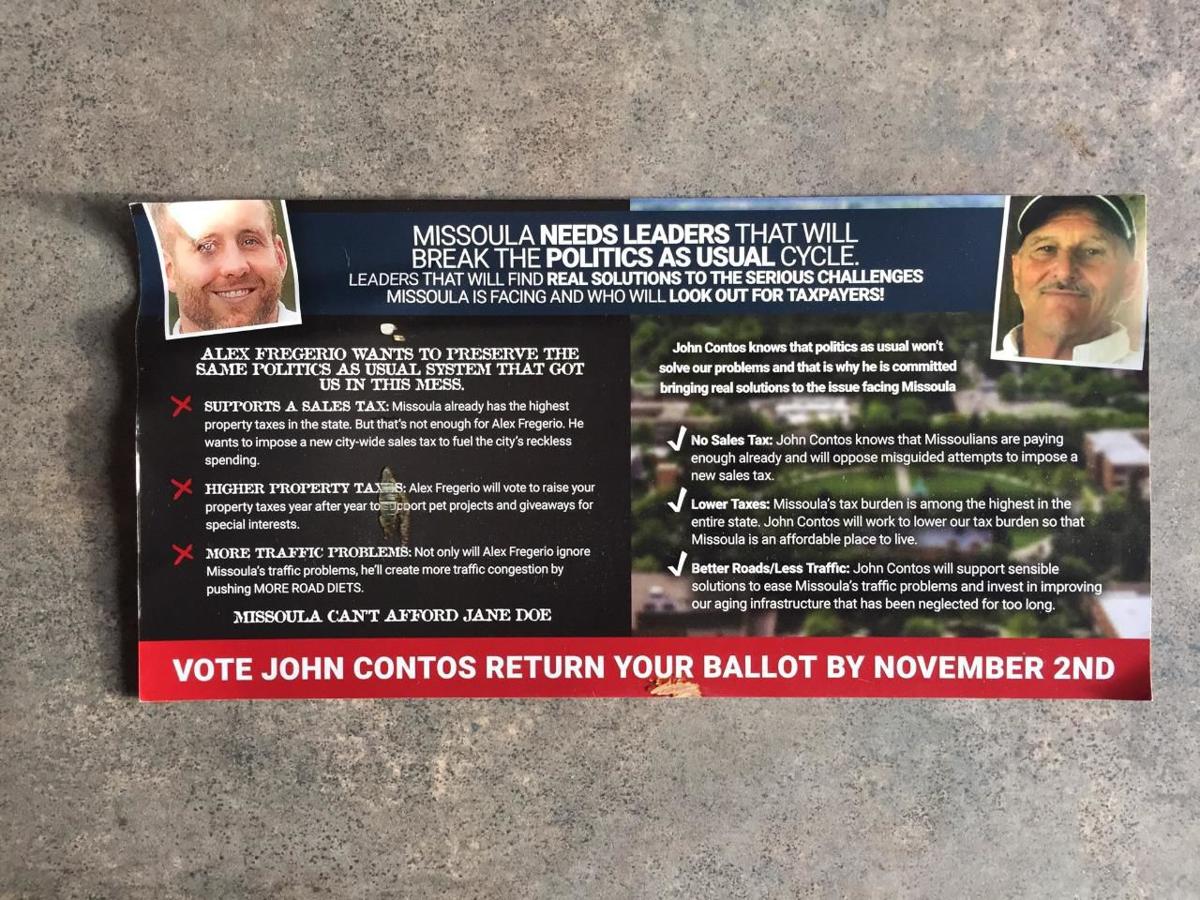 A series of political attack ads, like this one for Ward 5, for the Missoula City Council election were mailed to Missoula voters Monday, funded by a group of wealthy local business owners.

A series of political attack ads, like this one for Ward 2, for the Missoula City Council election were mailed to Missoula voters Monday, funded by a group of wealthy local business owners.

A series of political attack ads, like this one for Ward 6, for the Missoula City Council election were mailed to Missoula voters Monday, funded by a group of wealthy local business owners.

A series of political attack ads, like this one for Ward 5, for the Missoula City Council election were mailed to Missoula voters Monday, funded by a group of wealthy local business owners.

A series of political attack ads, like this one for Ward 2, for the Missoula City Council election were mailed to Missoula voters Monday, funded by a group of wealthy local business owners.

The mailers, delivered to homes in Wards 2, 5 and 6 on Monday, were funded by a political action committee, or PAC, called Missoulians for Missoula. The mailers all say the same things, including inaccurate information, about the targeted candidates in each affected ward.

The mailers accuse the candidates endorsed by the local Democratic Party committee of supporting a sales tax, higher property taxes, and "road diets" that cause traffic problems. The mailers boast the Republican-endorsed candidates will improve roads and traffic while lowering taxes.

The three wards targeted by the divisive mailers are notably ones identified by a Missoulian analysis of past elections as the ones most likely to be flipped from the liberal incumbent to a conservative newcomer.

Donors can give unlimited amounts of money to influence elections in Montana through the use of PACs, while direct candidate contributions are capped at $180. One of the donors to the PAC had contributed nearly $7,500 by the time most recent campaign finance report was filed at the end of September.

According to campaign finance reports, Missoulians for Missoula was created to support the host of candidates that lone conservative council member Jesse Ramos has dubbed “Team Liberty,” except for one, Amber Shaffer, who self-identifies as a Democrat. Ramos recruited the candidates to prevent any unopposed races in an attempt to increase conservative representation on the council.

The PAC also listed that it specifically opposes the candidates running against the “Team Liberty” candidates in Wards 2, 4, 5 and 6.

The mailers accuse Mirtha Becerra (Ward 2), Alex Fregerio (Ward 5) and Nick Shontz (Ward 6) of pushing “road diets,” or the reducing of traffic lanes on a given road. It was unclear what the basis of that accusation was.

Shontz, whose name was spelled wrong in the ads, said he doesn’t know where anyone got the idea that he generally supported road diets.

“I’ve never talked about road diets during the campaign, so I’m not really sure where that came from,” Shontz said. “My guess is that was spurred by the Fifth and Sixth (streets) re-striping. I’ve looked at the data on that one and it suggests they were more dangerous as two lanes, so I’d support things like that if the data shows it would improve safety.”

The mailers accuse the three candidates of supporting a city-wide sales tax. While it is true that the three candidates have voiced support for a local-option sales tax, the candidates see it as a way to reduce property taxes and put more tax burden on tourists. As the Montana law stands, the argument is moot, as cities like Missoula are not able to impose any type of sales tax.

The three candidates have advocated the Montana Legislature allow larger cities like Missoula to be able to pass a resort tax, like the one Whitefish has used to reduce property tax burdens by 25% and fund infrastructure projects. The resort tax option allows the city, upon voter approval, to tax things generally used by tourists, such as hotels, luxury goods, and alcohol. The current resort tax laws in Montana require a portion of the money to be used for property tax relief.

Sandra Vasecka, who is facing Shontz in Ward 6, said she was just as surprised to see the fliers as everyone else.

“At first I thought it was cool that someone believed in me, and it was free advertising,” Vasecka said. “I think it could have been a more solid comparison piece if that’s what they wanted to do, but it’s free advertising so I’m not against it.”

Vasecka said she thought the “grim” font and colors used on the side of the flier describing Shontz was a low blow. She agreed that she hadn’t heard Shontz say anything about road diets, but thought it was generally accurate.

Vasecka also noted the quote on the front of the mailer over her picture about listening to the community was representative of how she felt, but she didn’t think she’d actually ever said that.

On the mailers sent to Ward 5 residents comparing Alex Fregerio and John Contos, the designer of the mailer forgot to insert Fregerio’s name into a slot with dummy text.

The top contributor to the PAC, Kiomi Burks, who co-owns Fuel Fitness gyms across the state with her husband Michael Burks, donated $7,480 to the PAC.

The candidates the PAC supported with the attack mailers, Brent Sperry, John Contos and Sandra Vasecka, have all advocated for lowering city taxes through cutting services. The things the three have vowed not to cut are things like police and road maintenance, things that are important to all people of Missoula and make up the vast majority of the budget.

However, the things that they have advocated cutting, like the city’s $100,000 contribution to the Mountain Line’s fare-free service, are least likely to affect the type of wealthy donors funding the mailers. These types of cuts would affect lower-income people that rely on these services.

The candidates receiving help from the PAC have advocated for stopping tax-increment financing through the Missoula Redevelopment Agency’s urban renewal district funds. However, at least one of the PAC donors’ business, Bretz RV, received more than $122,000 in TIF benefits in 2015 to support an expansion.

Mailers comparing Ward 4 candidates Amber Sherrill and Alan Ault have not been reported, despite that race also being listed as a focus of the PAC on its organizing documents.

Political action committees are not required to disclose their founder or directors, but are required to list the treasurer. Katie Wenetta, the listed treasurer for Missoulians for Missoula, did not respond to an email, phone call or text message requesting information on the PAC’s leadership.