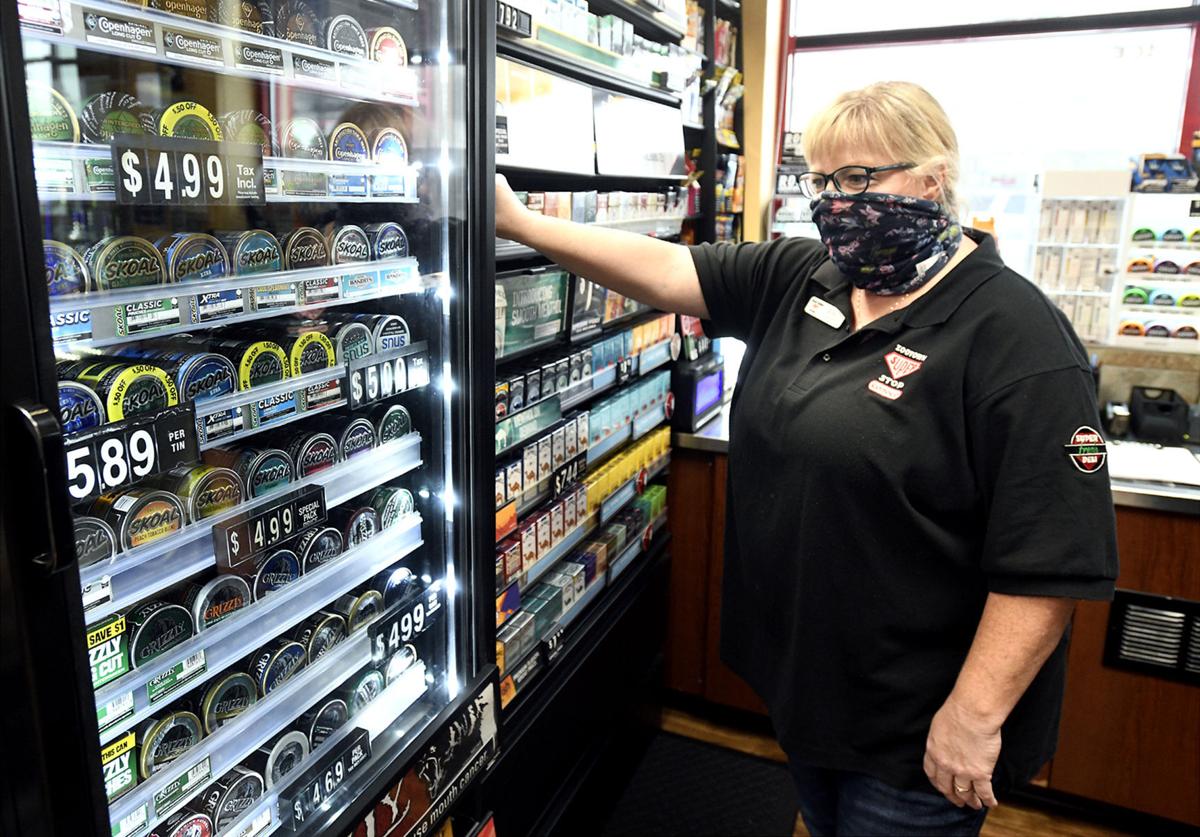 Erin Keffeler, store manager for Zootown Super Stop in Missoula, stands next to some of the store's flavored tobacco products on Friday. Convenience stores in Missoula and the Missoula Area Chamber of Commerce are voicing opposition to a proposed ban on the products by the Missoula City Council, saying it would punish retailers who only sell to legal-aged customers. 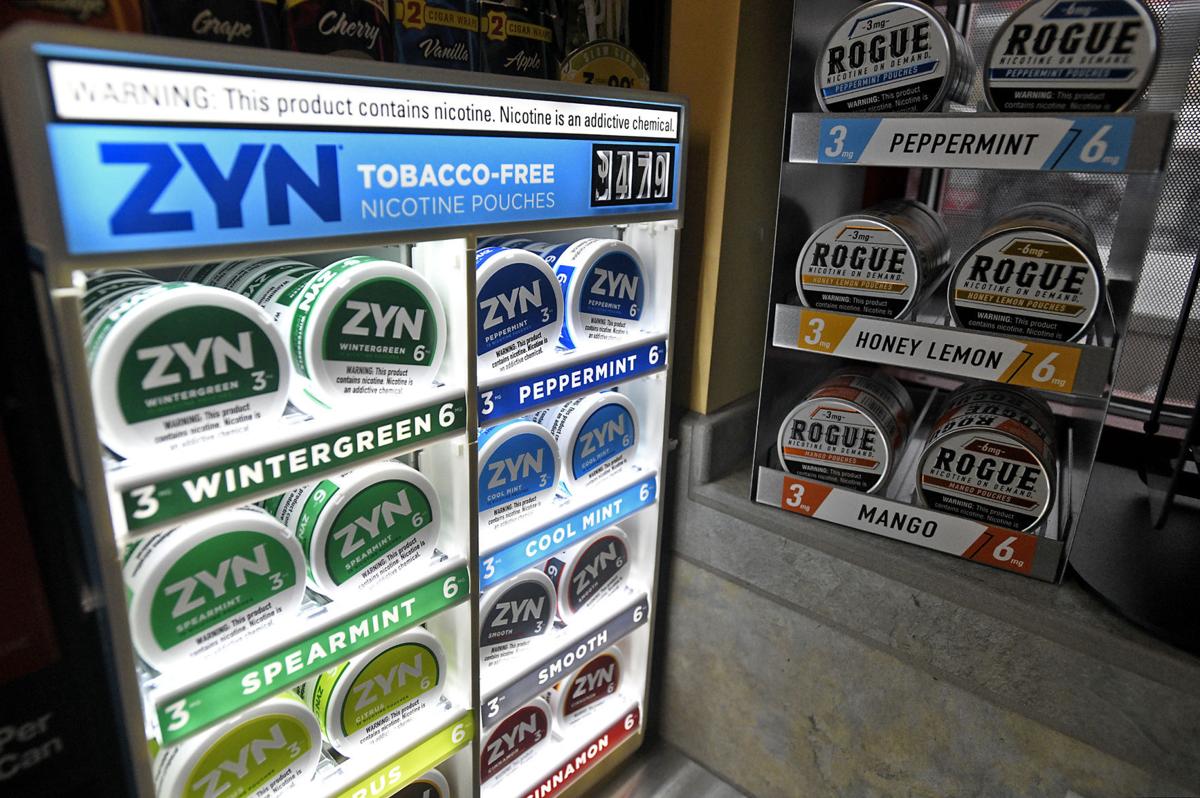 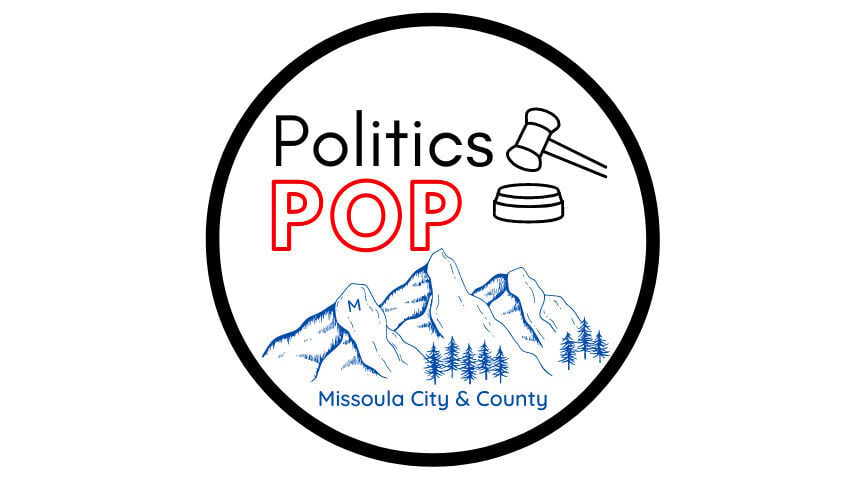 The Missoula Area Chamber of Commerce and a number of local businesses are voicing opposition to a flavored tobacco product ban that the Missoula City Council will take up for vote on Monday, Oct. 26.

The Chamber said it does not support the proposed ban in a letter to Council last week, saying it would punish retailers who follow the law and only sell to legal-aged customers, and would not address the passage of legally-purchased products to underage users.

The Chamber also noted that the FDA recently raised the legal age for tobacco product purchase from 18 to 21.

"It would be beneficial to give this measure time to determine whether it sufficiently addresses the problem of underage purchases," the letter read.

The proposed ban aims to curb youth use and prevent nicotine addiction by limiting access, but opponents have said the ban is too broad, will hurt local businesses and will not prevent teens from accessing such products in other ways such as ordering them online. Local businesses have also noted that it's illegal for them to sell to teens, and many said they don't use self-service displays prohibited by the ordinance that place tobacco products in places that don't require the assistance of the retailer.

"These kids are not getting that from from us," said Greg Tabish, owner of Great Western Petroleum, a fuel distributor and convenience store operator with three stores in Missoula, including the Zootown Super Stop on Higgins Avenue. "They're getting in illegally through other sources."

The ban would prohibit the sale of any flavored product containing or derived from tobacco or that contains nicotine, including tobacco-free products such as ZYN nicotine pouches, which some adults use to quit smoking.

Tabish said that would apply to about two-thirds of tobacco products they carry, and said it would also limit other sales.

"It changes their their traffic from going to local convenience stores, supporting local employees and local businesses and buying things other than their tobacco products like their gas, like their beer, like their pop, like their candy," Tabish said.

In a subsequent committee meeting organized to hear concerns of the business community on Wednesday, council member Sandra Vasecka questioned the legality of the ban.

City attorney Jim Nugent noted the state's "Youth Access to Tobacco Products Control Act" states that a local government can adopt regulations that are "no more stringent" than those imposed by the state.

In an email to a council member this week, Nugent said "there is some legal vulnerability for the City of Missoula if it attempts to ban flavored tobacco products."

The Chamber said in its letter that it also took issue with the process under which the regulation was created and said "the very businesses this proposal impacts were not given the chance to collaborate on a solution before reaching this point."

Hi-Noon marketing manager Earl Allen told the Missoulian that convenience stores have been on the front lines of controlling age restricted products for years, and that he would have liked to be involved with earlier conversations about the ban.

The council is considering the ordinance after the Missoula City-County Health Board adopted a resolution in February urging the council and County Commissioners to reduce youth access to nicotine products. The council has received much comment in favor of the proposal, along with much opposition, which took up several hours of a meeting on Monday.

Allen said Noon's stores do not carry many flavored vape products often cited as those that target teens and said "There's a misconception about how widely available the products are, and it's a little frustrating."

Missoula County health officials said more local restrictions could be on the horizon as the county continues to break records for the number of COVID-19 cases reported in a single day. Missoula County broke that record with 89 new infections on Thursday, and broke it again on Friday with 93 new infections.

Leahy said the Board of Health's COVID-19 committee is formulating proposals for additional local restrictions and will have announcements next week.

The county also reported the death of another resident on Friday from COVID-related complications.

"We send our thoughts and condolences to the family, friends, and community members affected by this loss," the county said in a press release Friday. "Out of respect for those impacted by this, we cannot report any additional information except that this individual was an older adult."

The county said it is not prohibiting trick-or-treating, but asked people to maintain small social circles for any Halloween celebrations.

Missoula County will mail tax bills to all property owners by Tuesday, Oct. 27. Those bills are already available online at www.missoulataxes.us. Tax payments for the first half of the year are due by 5 p.m. Monday, Nov. 30.

Taxes can be paid online, by mail to the Clerk and Treasurer’s Office at 200 W. Broadway St., Missoula MT, 59802, or at a blue courthouse drop box located in the west parking lot off Woody Street.

Missoula health officials said they expect the number of Covid-19 cases, hospitalizations and deaths in the county to continue to increase. Additional restrictions are possible.

In one project, the city will transform a former gravel pit into a publicly accessible parkland preserve along the Bitterroot River.

"I don't think anybody ever rode it," Miles McCarvel said. "I think that they just took it, put it somewhere and had to look at it every day."

With Election Day less than a week away, Missoula County voters who have not yet cast their ballot should use a drop box or vote in-person, instead of mailing ballots.

The proposed ordinance on the sale of flavored electronic tobacco products would go into effect on Jan. 11 if passed by the Missoula City Council.

Erin Keffeler, store manager for Zootown Super Stop in Missoula, stands next to some of the store's flavored tobacco products on Friday. Convenience stores in Missoula and the Missoula Area Chamber of Commerce are voicing opposition to a proposed ban on the products by the Missoula City Council, saying it would punish retailers who only sell to legal-aged customers.